Jason Davis - The Journey of a Man Through Time and Space

Jason Davis - The Journey of a Man Through Time and Space
Posted on 17th of January, 2023 by Naomi Bolton 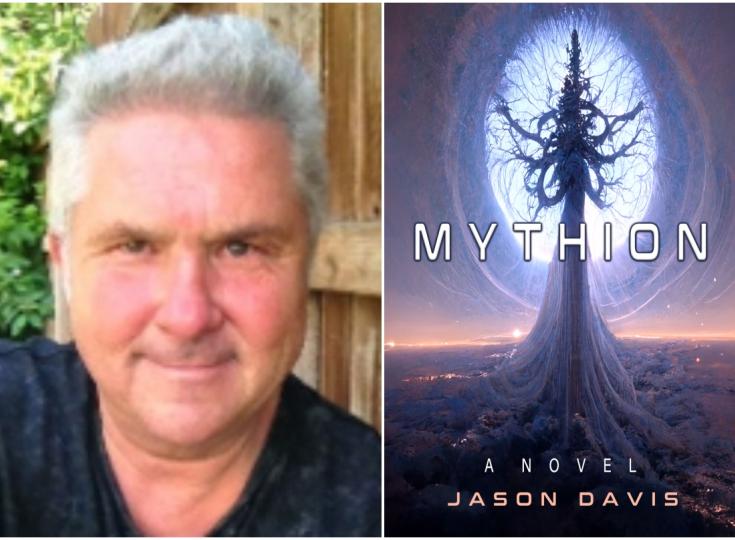 Jason Davis writes deep, layered, mind-bending, exhilarating books loaded with philosophical feasts that challenge stale paradigms, all from his Siren Class Cutter in orbit above Earth. Upon visits to Earthside, he hangs in Colorado, engaging in human things which require muscle movement and oxygen demand, while pointing his high-end astronomy gear to the firmament to photograph the wonders of the night sky, which he fully intends to visit one day. In addition to being an author, Davis is a treasure hunter, alchemist, astrophotographer, and in the esteemed estimation of some, a permanent child. He likes to have beverages around fires in wild places with great music and great friends. As our Author of the Day, he tells us about his book, Mythion: Human Transformation.

Please give us a short introduction to what Mythion: Human Transformation is about.

Mythion is the mind-bending journey of a man through time, space, and the limits of wonder, to discover himself, his mission, and his involvement in freeing humanity. When he comes to a hospital with no clue how he got there, he soon finds himself being railroaded into a psychotherapeutic marvel which takes place as a role-playing game in an alternate reality. He's mentored by a few characters, including a 5000-foot alien goddess, and he's stalked by a shadowy military unit. He soon finds out his therapy is actually training, and what he's being groomed for is huge, with an impact not on just Earth, but the solar system.

I'm basically a guru of mysticism and the full power latent within all of us. I wanted to share with readers how exactly to get centered, clear, and powerful, and this work, although fiction, is the blueprint.

Tell us more about Gavin. What makes him tick?

Gavin's a little bitchy, but you can't blame him, because his childhood was pretty rough, leaving him with a host of auto-immune disorders. He's riddled with all the same programming almost everyone is: fear, guilt, shame, inadequacy, beliefs, and he must clear himself of these pockets of programming in order to become what he becomes. In the real world, he's a fashionista, and style and the finer things in life drive him, but he doesn't have the financial means to actually experience the finer things in life.

Where does the concept of RPG psychotherapy come from?

In which way is this a book of self-discovery?

Gavin's experience is repeatable for the reader, meaning that its principles can be used in the same way any self-help book touts them. The methodologies would differ in that the reader is given the tools to identify what subversive mechanims drive their lives and choices, and that recognition is more than half the battle. I've had something in the area of 60 or so beta readers and the comments thus far reflect an uncanny conjunction of what they're reading and what they're going through on a personal level.

What fascinates you about sci-fi?

The limitlessness of worlds in a boundless vacuum, and the unfettered creativity that can be brought into the realm of written story.

I'd say intelligence and a finely tuned intuitive faculty are at the top. I'm an accomplished astrophotographer. I'm a successful businessman, able to take ideas and usher them through to integrated concerns of many moving parts. Perhaps my most honed skill is in understanding people, their drives, and underlying motives. I'm very intuitive, which I consider my most critical skill, as I conduct my life with it, and in fact wrote "Mythion" as an intuitive exercise.

Interesting cover. please tell us more about how it came about.

The being on the cover art was created by Midjourney, the AI image creation program through specific prompts. Once it was nailed, it was nailed. The entire process was driven by one imperative: will it draw the reader's eyes to it? I then added the book title and other text myself, and then expanded it into the wrap for the print version, designing all the rest of it myself. I did hire some self-publishing specialists to design a cover according to their successful models, but it was woefully poorly conceived for my vision.

First, the intuitive part. And secondly, the difficulty I had in coming up with a core plot thread in keeping with what the book wanted to say. On the intuitive part, I could be writing along for days on end, and it was all feeling great, read very well, etc., and then suddenly my fingers would just stop, and I'd know that it was either wrong or would be incorporated later. The third greatest challenge, which should be true for all authors, was getting into it all the literary imperatives for great writing versus the template cookie-cutter approach.

In nurturing this baby to its present condition, it's been a labor of love with all the associated labor pains, but incredibly instructive on what must be done in this day and age to be seen, and to engineer whom to be seen by. It's been tough, thrilling, stunning, eye-opening, and it taught me that I have a talent well beyond what I thought I had, mainly from the remarks of industry professionals. My editor, who worked in a NY publishing house, said it was the best book she'd read in a very long time. I hadn't expected that.

Are you a plotter or a pantser? Do you plan out the entire plot before you start writing, or does a lot of the story just "happen" along the way while you write?

With "Mythion," every single time I tried to plot it out in the way this is usually done, my intuition stopped me, but I did do what I would call a storyboard of scenes. In that way, I had a kind of modularity of where story parts could go, or be moved, etc. That did in fact become crucial. Because the world is largely built now, I'll probably do a much more professional job in building its sequel. What new writers should know is you don't really write a novel, you build it. After its structure is built, stringing the words together to tell the story is the easy part, but stay doggedly on the rules for great writing. There aren't many big commercial authors who do. Make it be art. Show instead of tell.

I tend to set the scene, and then place the characters in it. Turns out it's very immersive that way, again because the great writing imperatives are themselves why a scene is felt instead of merely observed. Great writing doesn't care about the subject, and irrespective of what that might be, great writing pulls the reader in and absorbs them. You could be writing about the preparation steps for a bowl of cereal, but if written well, it's absorbing. When I sit down to write, I make sure, from my storyboard, what's got to be included, and if I have to invent the circumstances to place the reader in, then the creative juices get churning and I put my fingers on the keys like I'm playing a piano.