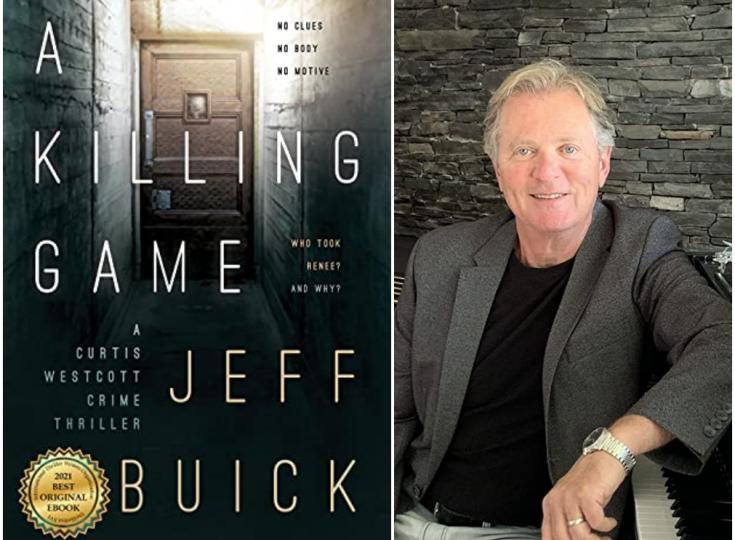 Jeff Buick writes fast-moving fiction across numerous genres, including mystery, suspense, thrillers and crime. For Jeff, it’s all about the story. Nothing works without a great story relentlessly driving the action ahead. A tight plot with well-crafted characters means a psychological thriller geared for readers who love an adventure. Creating the characters who populate his books is second only to the plot line, and there’s no better place to find those characters than in the real world. Writing is in Jeff’s blood, and over the last twenty years, he’s written twenty-three books. A few years ago Jeff put out five books through a NY publisher, but the industry has changed and he’s now Indie publishing on Amazon. 2021 has been an incredible year, with "A Killing Game", the first installment of the Curtis Westcott Crime Series, winning the award for International Thriller Writers Best Original Ebook category. The rest of the year is looking promising as well, with three new books set to be released, all with stories that will engage, enlighten and entertain the reader. Jeff lives in Calgary, Alberta which is wonderful in the summer, not so much in the winter.  As our Author of the Day, he tells us all about his book, Killing Game.

Please give us a short introduction to what Killing Game is about.

Curtis Westcott, head of Boston Homicide, is thrust into a battle of wits with Liem Khilt, a murderer who has taken a woman and plans to kill her in 14 days. Khilt is leaving veiled clues for Westcott, even showing up in disguise at the police station as a witness, and it’s only after discovering the existence of these clues that Westcott and his team can start to piece the puzzle together.

I came up with the idea of a killer who has a specific agenda – he’s leaving clues to murders he’s committed in the past and is going to commit the future, but nothing for the detectives working the current case. The clues are subtle, and the detectives working the cases in the previous cities where the murders occurred did not pick up on them, resulting in the women dying 14 days after being abducted. This book is very different from anything out there, and I think it raises Westcott above the crowd (as a detective) in what is the first book in a series.

Tell us more about Renee Charlebois. What makes her so special?

Renee’s father is a very wealthy man, but she’s her own woman. She has a string of successful restaurants and is extremely well-liked by her staff and customers. Khilt abducts her and locks her away, intent on killing her in two weeks (he has his reasons). There are a few scenes when he brings her food, and you understand that Renee is a defiant and strong woman. She refuses to submit and even tries for his gun once. She’s a character who handles everything that’s thrown at her, and one the reader will be pulling for.

Why is Curtis and Aislinn Byrne such a great team?

Curtis is the kind of boss who never needs to remind his staff he’s in charge, so you get this easy-going relationship with his detectives, and that makes it comfortable for the reader. Aislinn is his go-to detective for tough cases, and they work so smoothly together it’s like they’re on the same level. Aislinn is a third-generation Irish cop in Boston, and Curtis views her as a huge asset to the team. That sort of mutual respect means they’re seldom in conflict, and always pushing the investigation ahead, looking for the solve.

Readers say the book was fast-paced and hard to put down. How did you pull this off?

Not sure, I think it’s just my style. I like to read books and watch movies that move at a good pace, so that’s what I strive to write. And with thrillers/suspense, the rule of thumb is that as the plot unspools and the reader nears the end of the book, whatever actions the characters take must have more severe consequences.

Single digit golf handicap, can play November Rain on the piano, and I cook a wicked pizza.

Creating the characters. Since this is the first book in what I knew was going to be a series, getting solid characters was important. FYI, in the first draft, Aislinn was Billy Nelson, a completely different character. I didn’t like having Stan and Billy (both men), so I did a MAJOR rewrite and created Aislinn. So glad I did.

Do you plan out the entire plot before you start writing, or do some of the twists just "happen" along the way?

Both of the above. I know the plot and the ending before I start writing, but as things progress the book always takes on a life of its own and it goes down rabbit holes I never thought of.

You described settings across the country in great detail. How did you manage that?

By traveling a lot. I’ve visited lots of states in the US, been across Canada, seen Europe many times, Central America, Mexico, Africa, New Zealand – and every place I visit becomes a potential location in a book.

This is book 1 of a series. Can it be read as a standalone? How do the other books in this series tie in with this one?

This is readable as a standalone, but hopefully, my readers will want more. In the subsequent books, Curtis and his team make references back to events and people from A Killing Game, but a reader could pick up book 2 or book 3 in the series without reading book 1 and still get to know the settings and characters.

Make sure I know the ending. There is nothing worse than a reader spending twenty hours with a book that has a weak ending. I hate that, so I’m not going to inflict it on my readers. That said, I changed the ending of The Wrong Side of Murder because my editor told me, in no uncertain terms, that I had completely blown it on who the bad guy was. That (not so tiny) error took me six months to fix.

I write in coffee shops (too many distractions at home), every morning for about 1 to 2 hours, and then again in the afternoon if I’m not golfing. And I try to stay with that routine pretty much every day without fail. I’ve found that if you want to be a writer, you need to write.

The Art of Deceit, the fourth book in the Westcott series. I’m on the last couple of chapters.

http://www.jeffbuick.com or on my author profile on Amazon. Click on the link on my website to join my mailing list (I won’t spam you). Use the email link if you want, I will respond if you contact me. Thanks for taking the time to read this!!