Jeffrey James Higgins - a Detective, a Vigilante Killer and a Terrorist Conspiracy

Jeffrey James Higgins - a Detective, a Vigilante Killer and a Terrorist Conspiracy
Posted on 16th of November, 2021 by Naomi Bolton 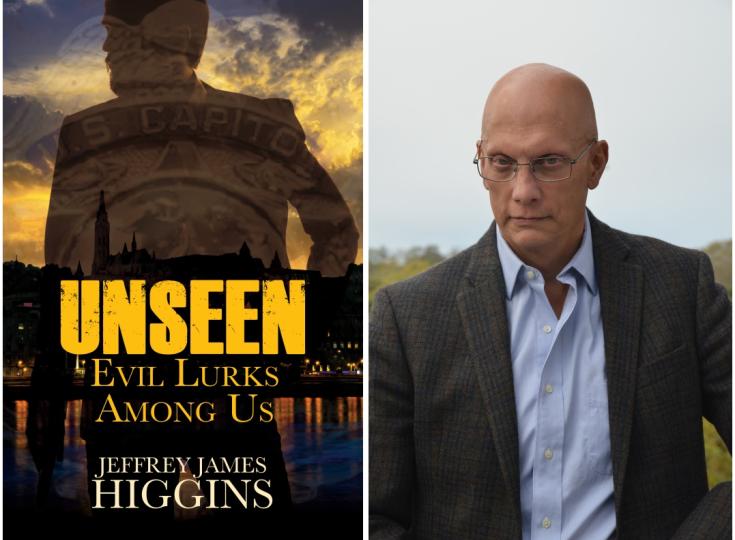 Jeffrey James Higgins is a former reporter and retired supervisory special agent who writes thriller novels, short stories, creative nonfiction, and essays. He has wrestled a suicide bomber, fought the Taliban in combat, and chased terrorists across five continents. He received both the Attorney General’s Award for Exceptional Heroism and the DEA Award of Valor. Jeffrey has been interviewed by CNN, New York Times, Fox News, Investigation Discovery, Declassified, and USA Today. He has won numerous awards, including the PenCraft Book Awards Fiction Book of the Year and a Readers’ Favorite Gold Medal. His debut novel was an Amazon #1 New Release. As our Author of the Day, he tells us all about Unseen: Evil Lurks Among Us.

Please give us a short introduction to what Unseen: Evil Lurks Among Us is about.

Rookie Homicide Detective Malachi Wolf investigates a string of murders in Washington, DC, and uncovers both a vigilante killer and a terrorist conspiracy—turning himself into a target. It’s Dexter meets Homeland.

After his father’s murder, Malachi abandoned his economics doctorate to become a police officer and protect the innocent. Now, he must solve his first homicide to prove himself worthy of the badge. My antagonist, Austin, grew up in a strict religious home, with an abusive father who taught him to solve problems with violence, so when Austin’s his girlfriend is murdered by an Islamist infiltrator, he seeks revenge. The body count grows as Malachi hunts a brutal assassin and unearths a sinister scheme that threatens the country. The former academic seeking justice and a vigilante set on revenge travel on a collision course—two men fighting evil by different means. Can Malachi stop the murders and expose the plot before the streets run with blood?

What inspired you to write about a vigilante killer and a terrorist conspiracy?

My wife, Cynthia Farahat, is one of the world’s leading experts on the Muslim brotherhood. Being married to an expert in radical Islamic terrorism is my secret weapon. The Brotherhood is the wellspring for almost all Sunni Islamic terrorism, so I based my fictional plot on a real-world conspiracy. Vigilantism is always interesting because it touches on morality, ethics, and political philosophy. Vigilantism creates a debate with shades of gray, so it creates an interesting element in the plot. I chose these topics to inform readers about the Brotherhood, but my primary goal was to craft a suspenseful thriller. We all want to be entertained.

Tell us more about Detective Malachi Wolf. What makes him tick?

Malachi’s studied economics, but after his father was killed in the Boston marathon, Malachi joined the Metropolitan Police in Washington, DC. His wife didn’t approve of his career choice, so she took their children and divorced him. Malachi’s first homicide case is an opportunity for him to find justice and prove to himself that he made the right choice. He battles a serious medical condition as he chases a vigilante and tries to expose a terrorist plot. Kirkus Reviews said my characters were “surprising.”

Your very first novel was an Amazon #1 release. Please tell us more about this.

Trapped on a storm-damaged yacht, a grieving woman must conquer her worst fears and fight for her life, in a story described as The Shining on a yacht. Dr. Dagny Steele is on the verge of fulfilling her lifelong calling to become a pediatric surgeon when the sudden death of her daughter sends her into a crushing depression. Grief-stricken and desperate to heal, she takes a leave of absence and sails across the Indian Ocean with her husband. Dagny begins to recover from her tragic loss when her voyage turns into a nightmare. Isolated and hunted at sea, can she survive a deadly crucible?

I spent 25 years in law enforcement and most of my career chasing terrorists across five continents. My professional skills include things like covert surveillance, source recruitment, undercover, and tactical assaults. I’ve qualified on weapons, from grenade launchers to belt-fed machine guns. If you need someone to fast-rope out of a helicopter, execute a search warrant on night vision, or dismantle a transnational criminal organization, then I’m your guy. Basically, my non-writing skills are useless outside law enforcement.

Readers say your characters are very believable. How did you pull this off?

My long career as a cop and a federal agent allows me to inject realism into my plots, action, and characters. I try to deepen my characters by giving them detailed backstories and plenty of internal conflicts. My primary characters have personal arcs that are as important to the story as my plot arc. I try to create unusual, quirky personalities so the characters feel unique.

My publisher, Black Rose Writing, created the cover. Their designer, David King, has done a wonderful job on the covers for both my novels. I made a few suggestions, like using a DC background and the silhouette of a suspect, but the design is entirely theirs. Intriguing covers attract readers, and Black Rose Writing creates terrific designs.

What was your greatest challenge when writing Unseen: Evil Lurks Among Us?

My greatest challenge was balancing a story with complex characters and multiple subplots. Both my protagonist and antagonist fight internal and external conflict. I also connected the vigilante plot to the terrorism subplot. It was challenging to expose a real terrorist conspiracy and inform the reader while keeping the pace moving. Writing an entertaining thriller is always my first goal.

Your book poses the question whether we are all living each day with our "heads in the sand" Why did you find this important to explore?

The world is full of dangerous people and evil ideologies. Most readers are busy leading their lives and are unaware of threats to their liberty and safety. I wanted to use an exciting thriller as a vehicle to warn them about a real-world problem. I believe people are more open to new ideas when they read fiction.

I always begin with a high-concept plot. I know the primary conflict, and how the story will end, then I develop characters and subplots. Some authors get an idea and start writing, but I can’t do that. I work best when I have a deep outline, but I allow myself the freedom to change characters and scenes as the story comes to life.

I’m editing a techno-thriller about an ex-special agent who investigates a murder at an artificial intelligence company that’s developing life-extending technology. All my novels have been thrillers, but each has been in a different subgenre. Eventually, I’ll probably settle into one series or subgenre, but right now, I enjoy telling a variety of stories.