Jenni Ogden - A Quiet Book about Turtles, Relationships and Community

Jenni Ogden - A Quiet Book about Turtles, Relationships and Community
Posted on 25th of April, 2018 by Naomi Bolton 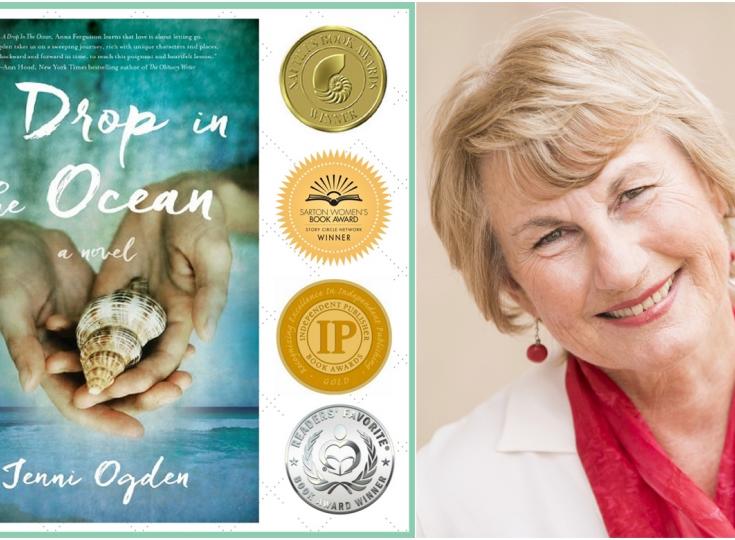 Jenni Ogden lives on an off-grid island in NZ and spends winters in tropical Australia. Her debut novel, 'A Drop in the Ocean' has won numerous awards and reached bestseller status in the US, Australia and Canada. Although it is fictional, many of the events come from her own experiences a a turtle researcher on Heron Island. As our Author of the Day, she tells us all about it.

Please give us a short introduction to what A Drop in the Ocean is about.

Boston neuroscientist and introvert, 49 year old Anna Fergusson, is in shock after the funding for her long-time research lab is cut. Fran, her only real friend, sees an advert offering a cabin for rent on a tiny tropical island on Australia’s Great Barrier Reef. It will give her breathing space and she can pen a memoir about running a lab while she decides what to do with the rest of her life. But Turtle Island, alive with sea birds and nesting Green turtles, is not the retreat she expected. Here she finds love—for the wildlife, the reef,  the eccentric islanders who become her family, and for Tom, the younger laid-back turtle whisperer. But as Anna’s life-changing year draws to a close her dream for a new life is threatened by a darkness that challenges everything she has come to believe about the power of love.

What inspired you to write A Drop in the Ocean?

In my early thirties I spent summers on Heron Island on the Great Barrier Reef (the island Turtle Island was modeled on) working as a volunteer turtle tagger. I stayed with my husband and our four young children in a cabin at the research station and it was an amazing experience for all of us. We have been back over the years to Heron and to many other islands on the Great Barrier Reef and elsewhere in the world. Returning to those heady turtle days through Anna’s story was pure bliss!  In January 2019 we are going back there for three weeks while I research a new book and hopefully join the turtle taggers once again!

This book has won numerous awards and reached bestseller status. What surprised you most about the reaction from readers?

There is a common belief that ‘commercial’ fiction needs to be fast-paced, and ‘A Drop in the Ocean’ is a quiet book. Robin Black included in her back-cover blurb “Like the turtles whose lives and habits are tracked in these pages, the characters at the heart of ‘A Drop in the Ocean’ move gently but with enormous consequences.” This was how I hoped it would be read. In truth, that many women (and indeed many men) would love to immerse themselves in a gentle story did not surprise me, but that so many discovered my book did!

Tell us more about Anna Fergusson. What makes her tick?

Anna always felt rather marginalized as a child growing up in London, and losing her father in a tragic diving accident pushed her further into her shell and put a barrier between her and her mother. In her adulthood she studied in Boston and found a passion as a neuroscientist, researching the terrible neurological disorder of Huntington’s Disease. By having her research assistants deal with the patients, shy and introverted Anna was able to avoid patient contact. It takes the quietly dramatic world of turtles, birds, and the tiny eccentric population on Turtle Island to draw her, little by little, out of her shell and give her the confidence and courage to find a family and life to love.

My previous career was as a clinical neuropsychologist, and I guess that is what I am best known for, so not much of a secret! In 2015 the International Neuropsychologocal Society honored me with their Distinguished Career Award, and by then I had taken early retirement from my university position, moved with my husband to a spectacular off-grid island 100 kms of the north- east coast of New Zealand, and was focusing on writing fiction. Apart from writing, reading and reviewing novels I have a great talent for spending hours doing nothing on the isolated beach 3 minutes from our home. I love music, especially blues, jazz and folk (and as a teenager played a mean guitar—which I still have and play spasmodically— and sang in a folk group called ’The Five Folk’!) I support my husband in his conservation efforts (no turtles here but many rare birds) and I’m a master at planning cheap travel as we usually spend 3-4 months in our winters either at our small place in tropical Queensland, or travelling in the Northern Hemisphere. My latest learning curve is managing a house-build on our island, which is no easy task as we are exporting the house in containers from Australia to NZ and then over to our island on a rather small barge!

The characters and their stories are entirely fictional, but many of the turtle, bird and fish encounters Anna has seem remarkably similar to mine! The medical themes in the story come out of my own professional work (and some from my personal experience). And the locations, both the island and Shetland are exactly as I remember them. I think my own life which has been deeply influenced by the natural world, conservation concerns, the joys of living off-grid, and the importance of belonging to a family and living in a small community has absolutely informed my characters.

I have always been an avid reader, and have always made up stories in my head, although I wasn’t a child or teenager who kept a detailed journal or constantly penned stories. Writing was a very big part of my neuropsychology career. I loved getting sentences exactly right; finding the perfect word. I wrote many research papers and then my two non-fiction books (often generously being likened to Oliver Sacks’s stories). But the desire to write a novel wasn’t satisfied by this and I made the decision to retire from my academic position early so I could focus on writing fiction. I knew it would be a steep learning curve, but I enjoy learning so that was an added bonus. I have never regretted that decision and love nothing better than to lose myself in the world of my imagination, and find the right words to transpose the images in my head to the page. And yes, I often find I have written about ideas I have been grappling with or that I am passionate about.

Say a Drop in the Ocean gets a movie adaptation - which actress would you like to see as Anna Fergusson?

English actress Keira Knightley. She’s rather too young but I am sure she can be made to look a beautiful 49!

They are still as real to me as the actual people I love! I don’t think about what happened to them after the book finished, and readers will discover why when they read the book…

Tell us more about your love for turtles - what fascinates you about these creatures?

Their ancient, never-changing form and behaviors. The incredible distances they swim, the fact that they returrn to nest where they were born, their magnificent and determined struggle up the beach time after time over 60 years to dig a nest and deposit their eggs, then leave again weeping (well not really but it looks as though they are) knowing they will never see their babies and that only a tiny number will survive. The enchantment of watching a mother turtle nest, an eruption of baby turtles as they tumble to the sea, and even the awe-inspiring copulation at sea of the males and females. The fact that marine turtles are a litmus test for the health of our oceans and that if we don’t prevent their extinction we will also lose numerous other species of sea vegetaition and animals, including our coral reefs.

This connection has been part of humanity since humans first walked on the Earth. In today’s world so many of the world’s peoples have become disconnected from the natural world and this has scary consequences—mass plant and animal extinctions, the shrinking of biodiversity, climate change, and the burgeoning of mental health disorders in people who rarely see the sun or stars through an unpolluted atmosphere. With every passing year this human-natural world connection is ever more urgent.

Another drop in the island, Lizard Island on Great Barrier Reef Australia, where we camped,August 2012

I am revising the very first fiction ms I ever wrote (set in London, New Orleans during Katrina, and New Zealand) and which I then stuck in the bottom drawer. I recently had a new editorial assessment on it and am freshly motivated to revise it in some pretty fundamental ways. The hope is that the writing experience I have gained will pay off! (It’s ‘theme’ song is “Georgia On My Mind.”) I have also completed a new novel that I have high hopes for. It is also set in Australia from 1960 to 2000, and is about a long time friendship between two very diferent couples. It is a quiet book but has a mass of drama. It’s ‘theme song’ is Carole King and James Tayor’s 1971 hit “You’ve Got a Friend.

Our library in our Great Barrier Island house

For readers who have also taken a psychology course or two, the fact that I was fortunate to work at Massachusetts Institute of Technology with H.M., the most famous amnesiac in history, might be of interest. I tell his story and many others in two best-selling books; "Fractured Minds: A Case-Study Approach to Clinical Neuropsychology" and "Trouble In Mind: Stories from a Neuropsychologist's Casebook". I am an expert blogger on Psychology Today ( http://www.psychologytoday.com/blog/trouble-in-mind-0 ) and review fiction for Netgalley and frequently on Goodreads. I would love readers to visit my author website (http://www.jenniogden.com ) and see what a beautiful island I live on, and I would especially love you to sign up for my monthly e-newsletter http://www.jenniogden.com/newsletter.htm where I pass on a few insights into whatever is going on in my off-grid island life or my travels, what is happening in my writing life, and a review of a book I enjoyed. Follow me if you are so inclined on my Amazon Author page, https://www.amazon.com/Jenni-Ogden/e/B001IXRN80/ref=dp_byline_cont_pop_ebooks_1 my Goodreads page, http://www.goodreads.com/author/show/227694.Jenni_Ogden