JMD Reid - A Fantasy Adventure Rife With Tension, Intrigue, and Deceit
Posted on 9th of March, 2021 by Naomi Bolton 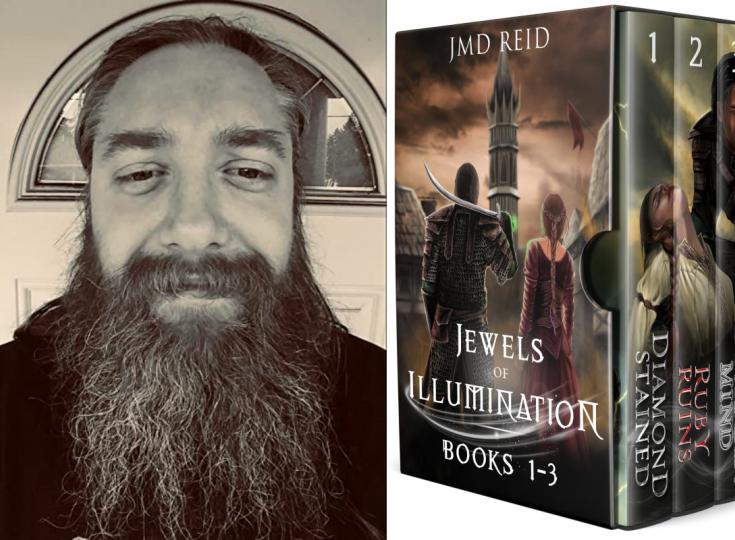 JMD Reid has been a long-time fan of Fantasy ever since he read The Hobbit way back in the fourth grade. His head has always been filled with fantastical tales, and he is eager to share the worlds dwelling in his dreams with you. Reid is long-time resident of the Pacific Northwest in and around the City of Tacoma. The rainy, gloomy atmosphere of Western Washington, combined with the natural beauty of the evergreen forests and the looming Mount Rainier, provides the perfect climate to brew creative worlds and exciting stories! When he's not writing, Reid enjoys playing video games, playing D&D, and listening to amazing music. As our Author of the Day, he tells us all about his book, Jewels of Illumination.

Please give us a short introduction to what Jewels of Illumination is about.

In the corrupt city of Kash, Obhin has a chance at redemption for his past crimes by guarding a scholar and healer from the machinations of a crime syndicate, a ruthless brigand, and a dark necromancer. Once more, Obhin is a guard, but can he escape his past or will he be crushed by them. Avena is the scholar's adopted daughter and protege. Fearing for his safety, she will do anything to protect him, but can she trust Obhin and the darkness about him?

Obhin and Avena will have to learn to trust each other be dragged down by the rot of Kash.

What inspired you to write a story about a disgraced guard who turns to a magical blade?

I wrote this short story called Dual. It was this idea I had about two young men in a duel over a woman that were forced into dire circumstances in the middle of their fight and forced to rely on each other. Instead of fighting, they talk and realize neither of them knew the woman they both loved. At the end, one was able to let go of her while the other couldn't accept the truth and finished their duel, killing his rival.

Though the short story is told from Taim's point of view, it is Obhin that kills him. After I wrote the story, I wondered what happened to Obhin and Foonauri, the woman. Could they have any happiness? Or would the truth of her betrayal and what his passion had caused him to do destroy them? What would it do to Obhin who saw himself as an honorable guy and who made a terrible mistake.

I had another story idea, and realized Obhin was the character for it and thus we have Jewels of Illumination!

Why did you title this series "Jewels of Illumination"?

In this world, the magic system is based of using seven jewels to power magical machines called jewelchines (jewel machines). They each have their own sphere. Diamonds provide illumination, Emeralds strength and manipulate earth, Topazes heal and manipulate life, etc. Illumination refers both to the fact there are secrets to be revealed and the character of the White Lady who Illuminates the world with her Truth.

Where does your fascination with Fantasy come from?

It definitely started with Tolkien and the Lord of the Rings. I read those books as a kid (long before the movies) and loved them. I was reading Lord of the Rings while moving over Christmas break in the sixth grade. I had to return to school and my mom could tell I wasn't doing well. She asked an employee at Waldonbooks for a recommendation and he pointed her to Pawn of Prophecy by David Eddings. This is the perfect sort of book for a boy of twelve to read and I was hooked. I moved onto Terry Brooks and Robert Jordan and Ann McCafferey.

Tell us more about Obhin. What makes him tick?

Obhin is one haunted by his past, but at his core he is a very protective person. He wants to defend those he cares about. He's very much a man who wants to be doing things. He would prefer to solve problems head on. He has a hard time dealing with emotional issues, running from them. Withdrawing from them. These two traits lead him to handle some situations badly.

What makes Avena so special?

Avena is a young woman haunted by three deaths in her life which drives her to be a healer and protector. She is a very stubborn young woman with a headstrong streak that can get her in over her head. She'll leap in with checking the water. Whether its standing up to a bully wanting to hurt her patient or a mob wanting to destroy her city, she won't back down. Her empathetic side leads her to want to make the world better. Where Obhin wants to protect those close to him, she wants to protect those who have no power in society.

Your characters are flawed - why do you create them this way?

People are flawed. An inspiring hero is the person who has made bad decisions, made mistakes, but wants to be better. Wants to improve. To do what's right even when they have all the reasons not to. Overcoming their own demons. It makes for compelling reading and characters that readers can root for.

Which character was the most challenging to write for?

Avena. She has the more esoteric arc as we delve into the abilities she gains and how her character develops. Obhin's easy. Point him in the direction of the enemy and he'll swing away. Avena is more worried about how her actions affect her world and how she can improve it, not just protect it.

Readers say the story was thrilling and kept them at the edge of their seats. How did you pull this off?

Build tension whenever you can. Diamond Stained has the burden of being the beginning. I have to introduce not just the characters but the city of Kash, which is its own character in a way. So I had to find little ways to keep the threat of their enemies lurking on the edges. Slowly draw the noose about the characters. Also, ending chapters on cliffhangers whenever possible.

There are some twists and turns in your plot. Did you plan it all out before you started writing, or did some of it just "happen" along the way?

I tend to have all the major events planned out. The big moments that drive the plot and change the status quo. The character interactions and how they react to these events are usually found more in the moment.

What is your favorite motivational phrase and why?

"You can fix everything but a blank page." I can't remember who said this, but it means just write your story and don't worry if it feels like it's not going great. Or you're doing a bad job. Rewrites and editing are to fix that. But you can't get that stage if you don't put words down on the page.

I start writing within ten minutes of waking most days. I suppose that's weird. I wake up pretty easily. My average writing day is spent doing a lot of writing since I'm also a ghost writer. It's a lot of writing with breaks for eating, showering, taking a walk. It's the same amount of time, but I can be doing more editing than writing, but I put a lot of words down. Easily 20,000 a day between four or five projects.

I am writing Sands of Loss (Shadow of the Dragon Book 4) and finishing the final editing draft of Fractured Soul (Assassins of Illumination Book 4) which is a follow series to Jewels that deals with the aftermath of the event and follows one of teh enemies, a shape-shifting assassin named No One, as he struggles to regain his humanity.