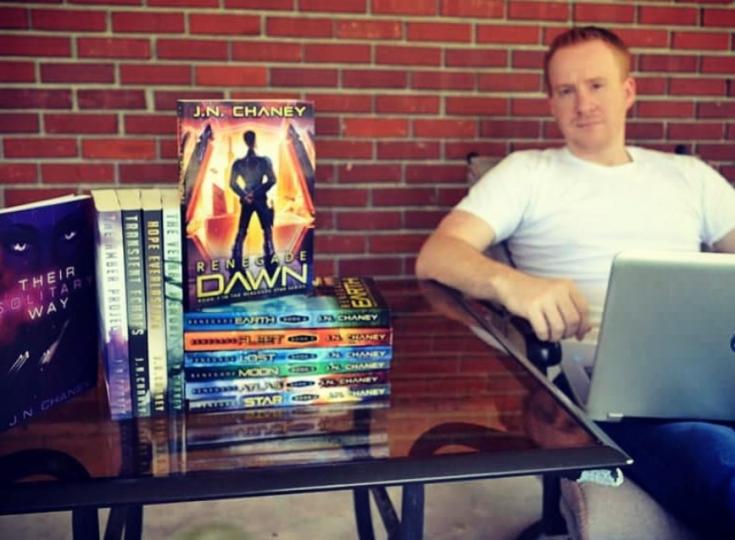 J. N. Chaney has a Master’s of Fine Arts in Creative Writing and fancies himself quite the Super Mario Bros. fan. When he isn’t writing or gaming, you can find him somewhere online, probably goofing off. He spends most of his downtime reading, catching up on netflix, and building a weapon to combat the oncoming invasion of fifth dimensional beings (probably shaped like spaghetti or something). After serving in the US Air Force, Chaney decided to pursue writing full time. Since then, he’s published four novels in his ongoing Variant Saga. It’s a cool series about genetic engineering, dystopian societies, and other neat stuff. As our Author of the Day, Chaney tells us all about it.

Please give us a short introduction to what The Variant Saga is about.

In 2157, a mysterious gas known as Variant spreads across the globe, killing or mutating most organic life. The surviving humans take refuge in an underground city, determined to return home. But after generations of failures and botched attempts, hope is beginning to dwindle. That is, until a young scientist makes a unique discovery--and everything changes. Suddenly, there's reason to hope again, and it rests within a group of genetically engineered children that are both human and Variant.

Terry is one of these children, modified and trained to endure the harsh conditions of a planet he cannot begin to understand. After years of preparation, Terry thinks he knows what to expect. But the reality is far stranger than anything he can imagine--and what he will become is far more dangerous.

What inspired you to write about a mysterious gas that spreads across the globe?

I grew up playing dystopian video games like Fallout, so I was fascinated by the idea of this alien world on Earth. Using a gas seemed like a good alternative to nuclear radiation, so I went with that.

Tell us more about Terry. What makes him tick?

Terry is an isolated kid with a detached mother. He's mostly alone in the world, except for his sister. It is her love that keeps him going as he transitions to the academy and begins his journey. He wants to find his way back to her, so he's willing to work and fight to make that happen. He's also very weak, physically, and the smallest of the group.

Why do you enjoy sci-fi as a genre?

Scifi and fantasy allow you to craft stories that can go in any direction and provide insight into unique situations that would otherwise not be possible. Scifi specifically has the ability to predict the future, which is a unique quirk of the genre. It's not very far fetched to think that at a certain point, humanity will accidentally destroy the world and find ourselves underground, struggling to survive. For that reason, these stories are both entertaining and frightening.

Did you plan from the start to make this into a series? How do the books in the series tie in with one another?

Originally, no, it was only meant to be a single story, and the first book is very much written in that way (including the epilogue, which was always planned), but as I finished the book, I realized I wanted to know what happened next. From there, I planned out the next three books and reached the conclusion that felt right to me.

Have you always wanted to be a writer? What inspired your debut?

I've been writing since I was 15, starting with video game fan fiction (my first story was about the Legend of Zelda) and it only grew from there. I eventually went to college to study writing and published once I was 30 years old.

The Variant Saga deals with genetic engineering - what drew you to this theme?

I've just always been fascinated by genetic engineering and the potential for manmade human modifications.

In which way are these books different from your regular dystopian setting?

Many dystopian books focus on a great war or nuclear fallout. This is something completely different. No one knows where the gas came from or who unleashed it. That's part of the great mystery.

Right now I'm expanding the Renegade Star series. I'm currently working on book 10, but we also have three spinoff series going as well as a few prequel novels. Altogether, the Renegade Star universe contains about fifteen novels and counting, with several more planned in the near future.