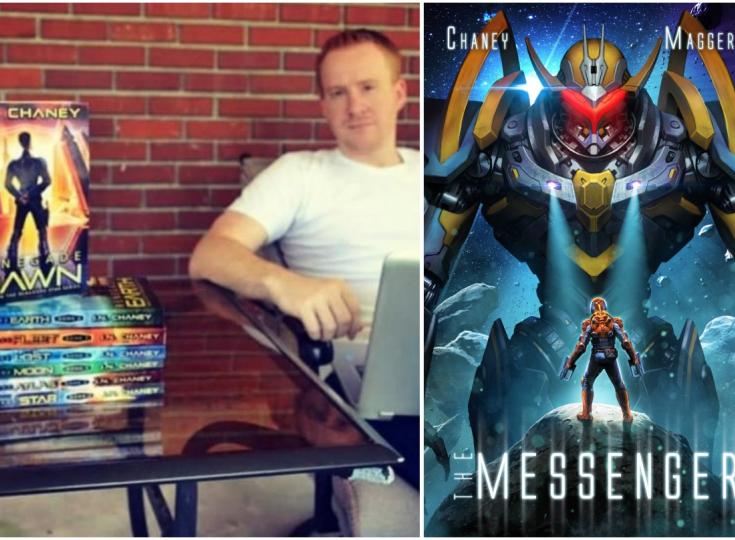 J. N. Chaney has a Master’s of Fine Arts in creative writing and fancies himself quite the Super Mario Bros. fan. When he isn’t writing or gaming, you can find him in the Renegade Readers Facebook Group: https://www.facebook.com/groups/jnchaneyreaders/ .  As our Author of the Day, Chaney tells us all about his book, The Messenger.

Please give us a short introduction to what The Messenger is about.

Dash never asked to be a mech pilot, but fate has other plans.

On the run and out of chances, he guides his ship and crew into the heart of a relic older than the galaxy itself--and find himself on the edge of an eternal war he never knew existed.

The relic is a mech, lost to history and forgotten by all who remain. Built by an ancient race to be the ultimate weapon, the machine is capable of unspeakable destruction, and its discovery could unhinge the balance of power throughout known space.

Worse still, the A.I. inside the machine speaks of an ancient evil that will soon arrive--a race whose power far exceeds anything humanity has ever witnessed.

Only the Messenger can stand against them, the A.I. tells its new pilot. Only you can do what must be done.

Tell us more about Dash.  What makes him so special?

Dash never asked for this, but once he’s faced with the realization of the war ahead, he fully accepts the burden. The task certainly isn’t easy, but what I find so refreshing about Dash is that he doesn’t sit and complain about having this responsibility thrown on his shoulders. He’s a realist and accepts that if he doesn’t do it, no one else will.

Why Military Sci-Fi? What drew you to this genre?

I’ve been writing and reading this genre for years. The Messenger isn’t my first foray into the genre and it certainly will not be my last.

Why did you decide to co-write this series?

Terry Maggert and I have been hashing out ideas for a series for quite some time. When I approached him about putting together a book about a courier who discovers a long lost mech, he was fully onboard. Terry has always loved stories like this and he was very quick to sign on.

I'm an optimist, so I like to think that the future holds a lot of promise for humanity and the role we play in the universe. There’s no knowing whether or not we’ll doom ourselves through our own technology, but I like to think we’ll find a way to thrive.

I enjoyed creating a hidden backstory for the universe that very few are aware of. Part of the fun in the story is uncovering the ancient, forgotten lore that has been lost to time. I’ve always enjoyed stories about Atlantis. This is very similar.

My next project is the fifth book in the Last Reaper series, followed by the third Ruins of the Galaxy book. At any given time, I’m working on something new that I hope readers will find interesting and refreshing.

You can learn about all my work on www.jnchaney.com . We update it every week with new info about upcoming ebook releases, audiobooks, and more. You can also find us on our Facebook group, “JN Chaney’s Renegade Readers.”