Joe Rothstein - Politics, Conspiracy and a Latina President
Posted on 9th of January, 2022 by Naomi Bolton 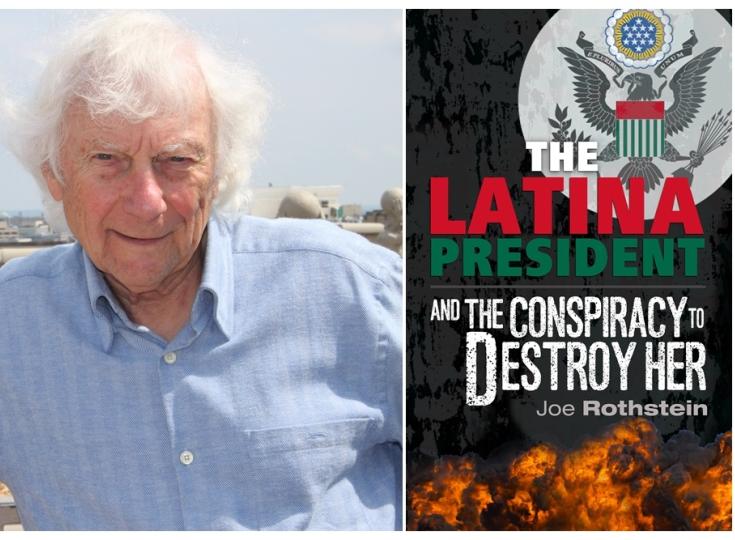 Many authors write political fiction, but few do so with the authenticity Joe Rothstein brings to the genre.  For more than 30 years, Joe Rothstein was fully immersed in national politics as a strategist, campaign manager, and media producer. He lived the high wire tension of hundreds of campaigns. Now he is repurposing that experience in a series of political thrillers. As our Author of the Day, Rothstein discusses one of his works featuring a protagonist known as “Tenny,” Isabel Tennyson, a fun-loving, charismatic heiress who becomes President of the United States with a mission to reform the corrupt financial system.  Rothstein gives us a look behind the scenes of politics and how it affects us all, a topic as relevant as today’s headlines, wrapped in a drama so intense one reviewer writes, “If Grisham wrote political thrillers, they’d feel like this.”

Please give us a short introduction to what The Latina President is about.

My protagonist, Isabel Aragon Tennyson, discovers that her family's fortune is built on corruption. Though her family, and its heritage are deeply rooted in Mexico, she is a U.S. citizen by virtue of being born and raised in the U.S. As penance for her family's sins she volunteers her time and contributes to the immigrant poor in Los Angeles, where she grew up.  Then, through a series of circumstances, over a span of a dozen years, "Tenny," as she is popularly known, wins election to Congress, is appointed to an open seat in the U.S. Senate, and runs for, and is elected president.  As president, she takes on as a mission the defeat of corrupt companies, like her family's, not only in the U.S. but in Mexico and worldwide.  A cabal of the rich and powerful meet her challenge by organizing a conspiracy to destroy her before she succeeds.  This is the conflict central to the story.

What inspired you to write about a Latina U.S. President who is threatened by an international conspiracy?

The vast gap in the distribution of wealth is one of the defining issues of current life in the U.S. I wanted to frame the issue in a fictional setting that addresses real problems while making it entertaining and compelling for readers.

In which ways have your experience with U.S. politics shaped your worldview and influenced your writing?

Pretty much all ways. Before becoming involved I had no idea that I would become a cast member in a great, continuing drama. Those who run for political office subject themselves to intense public scrutiny and, quite often, personal humiliation. Their finances, their love lives, their most private life’s secrets, all become fair game for public review. Careers, marriages, life savings, and long-time friendships are at risk. The campaigns are a blur of daily decisions, any one of which, on any given day, could win or lose the election. Election day itself is a one-day sale. Finishing with 49.9% of the vote may not be a winning number. There are no prizes for second best, only disappointment, heartbreak, and often huge financial deficits. The process unfolds in a vice of tension, ratcheting tighter with each new poll, each favorable or unfavorable news cycle, each day closer to electoral judgment. Daily news coverage of campaigns fails to capture all of this.

You used to be a media producer for several high-profile politicians. How big a role do you think does the media play in shaping public views on a candidate?

It changes with the times and technology. For many years, it was an article of faith that 80% of a campaign budget would be dedicated to TV ads. Now, with the Internet, social media, cheap data storage of voter information, it’s far more complex. It’s impossible for candidates for most offices to meet more than a small fraction of their voters personally. So, it must be done through a variety of media.

The corruption and unfairness of our global financial system is a prominent theme in the book. Why?

A better question is why isn't this a more prominent theme in more publications.  When the top one percent of U.S. households have as much wealth as the bottom 50% that tells you that something is radically out of whack with our wealth distribution system.  It's not just a question of fairness.  With such an unbalanced system, markets can't function properly.  Fewer dollars means fewer buyers, fewer sales, fewer jobs for making products, and so on.  This is a crisis, and it's getting worse.

Tell us more about Isabel Aragon "Tenny" Tennyson's character. What makes her so special?

Tenny begins life as privileged as a person can be. Wealthy family. The best of everything. Even taking on wealth management as a career, embracing the good life and others in it.  Then she discovers the reality of her background, the corrupt source of her fortune. A vague sense of wanting to do right leads her into a world she had never seen, the real world of hunger, joblessness, families working around the clock to make ends meet.  She transforms from a dilettante into a crusader.  All along, even as a crusading President, she demonstrates both her strengths and weaknesses.  In other words, she's human.

The characters in your book are portrayed vividly and are very believable. Were any of them inspired by real people?

Yes, they were. But you have to match body parts to identify them.  No one character mirrors a person I could name.  All arise from multiple backgrounds and experiences.

Do you think that the scenarios you describe in the book could actually happen?

Lawrence Demaria, the well-known and successful writer of the Jake Scarne detective series, and an author who I much admire, wrote this review after reading The Latina President: "It wasn't that long ago when a plot like this would seem far-fetched. No more."  I think that sums it up.

Does your book contain an underlying message - what do you hope readers will take from this?

The message is as old as Ben Franklin’s reply to a colonist who asked what kind of government the country’s founders had created. He said, “it’s a republic if you can keep it.” Our system always is under threat, now more than ever. We all have a responsibility to help keep it, starting with our informed votes.

This is your debut novel - what have you published since?

“The Salvation Project.” This is a sequel with a totally different challenge Tenny faces as she runs for re-election. The prestigious Pacific Reviews selected it as the political thriller of the year and compared it favorably with “The Manchurian Candidate,” and Stephen King’s “Dead Zone.” That was very exciting for me.

The third book in what’s become my “Tenny trilogy.” The working title is “The Moment of Menace,” and we plan to release it in April.