John Egenes - Guided by a Horse

John Egenes - Guided by a Horse
Posted on 12th of December, 2018 by Naomi Bolton 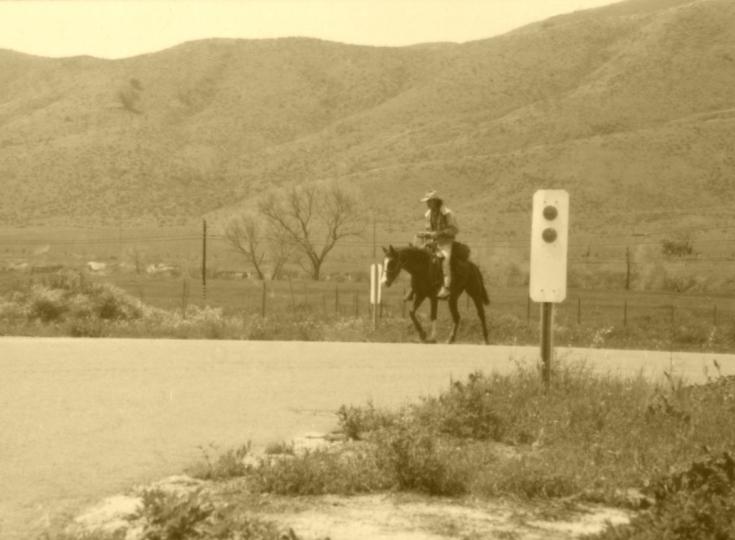 John Egenes has been a musician, a saddlemaker, a dog catcher, a university lecturer, and a hobo, and many other things. His life is a highway that he views through a windshield full of squashed bugs. As our Author of the Day, Egenes talks about his horseback journey through America, his horse Gizmo and his love for music.

For readers who haven't heard of the book before, please give us a short summary what Man & Horse: The Long Ride Across America is about.

The book is a memoir that describes a journey I took with my young horse, Gizmo, back in 1974. We traveled from coast to coast across the United States, seven months and forty-four hundred miles. It was a different world back then, and we witnessed an America that no longer exists.

Gizmo seems to have been a very special horse.  Did you also own any relatives of his?

Yes, he was pretty special. I raised him from a colt, from when he was a weanling, and we were together all his life, for 22 years. He didn’t have any siblings so no, I never had any relatives of his. In the book I spend a lot of time describing Gizmo, his habits, his quirky personality, and how he ultimately showed me the right trail to follow.

You also worked as a saddle maker and used to shoe Gizmo yourself. Has this long trip changed the way you would design saddles or shoe horses?

I actually designed a cross-country saddle when I was making saddles. Space age tech was still in its infancy when it came to saddlery and horse gear, so I was very far out ahead of the curve. I never built that saddle, but I think my instincts were spot on. Of course, nowadays there are lightweight materials and interesting designs using low-density, open cell architecture in making trees, skirt padding, and other aspects of saddlery. I took a lot of flack from other saddlemakers at the time, when I suggested using non-traditional materials instead of leather. My argument for it at the time was, “You don’t see very many leather ski boots anymore, do you?” [grin]. Still, I loved working with leather, and my saddles were most certainly traditional, in the cowboy sense. No longer making them, but it would have been nice to try some of my futuristic ideas, I reckon. As for horseshoes, yes… many great advances have been made, though they weren’t yet available to Gizmo and I back then. Clip-on shoes, lightweight plastic shoes, and other innovations have found their way into the mainstream in the equine world, especially for endurance riding competition.

You were a stranger in every town you passed.  Did you find it easier to interact with strangers after a while or did you mostly keep to yourself?

I’ve never had a difficult time meeting and talking to strangers, so the ride wasn’t difficult in that sense. Still, when Gizmo and I came to a town we usually kept a low profile. Or, we TRIED to keep a low profile (laughs…). Once we had crossed the Mississippi River into Tennessee, we began to show up on TV news broadcasts, and it became more and more difficult to be alone. As a result, we spent many nights camping in graveyards, just to have some peace and quiet. [smiles…]

Why would you consider Gizmo a bit of a spiritual guide?

It’s interesting… I started the ride with a tremendous sense of resonsibility. I saw myself as the guide, the leader, the provider, the one who would get us through the seven month ordeal using his knowledge, his good sense, and his wits. Along with this responsibility came a huge amount of emotional pressure. Gizmo was, after all, in my care.

But somewhere along the trail I realized that it was HE who was the rock in all this. I was the one leaning on HIM, not the other way around. I depended upon him to be steady, strong, and uncomplaining, and he was… every single day. He propped me up and held me steady, far more than I would have ever wanted to admit at the time.

Did you come across any wild animals on your journey, and how did Gizmo react to them?

Lots of wildlife, both dead and alive. Wild horses, deer, elk, bears, antelope, coyotes, prairie dogs, rabbits, desert tortoises and other ground dwellers, all manner of lizards and snakes, migrating birds. Many dead animals alongside two lane roads and highways, killed by automobiles. It was quite a shock, really, to see how many there were. Something I hadn’t really expected. Gizmo was fine with it all and, for the most part, he ignored the critters we met. There were times I could see that he wanted to join his brethren when herds of wild horses were curious about us, far out in the deserts and Indian reservations of the Southwest. But he took everything in stride.

In a previous interview you said you were considering starting on a new book. Have you done so yet?

Still working on it. It’s coming along, and I’m hoping to get it out in the coming year. It’s fiction, which I’m finding is MUCH more difficult for me to write than non-fiction was (and that was certainly hard enough!). But I’m happy with it so far. We’ll see how it goes…

Music is a passion for you - you have a doctorate in music. Did you take any musical instruments along on the trip?

Just a harmonica. It was the only thing I could carry. Managed to play the guitar a few times during the ride, but mostly just blew on my harp, which probably annoyed Gizmo no end. Of course, I’ve made up for that these days, having more instruments than I know what to do with.

After publishing your debut novel, in what ways has your life changed?

Well, I was expecting to become rich and famous, but that hasn’t worked out so far (laughs…). But seriously, I have met some incredible people all over the world. It has introduced me to people within the publishing industry, and even some people in the film industry (no, there’s no movie deal yet…. call me if you’re interested. [grin] ). Also, since I never really talked much about my ride over the years, many of my longtime friends were shocked that I’d done such a thing.

Oh wow, that’s a tough one. So many great writers…. Someone like Kurt Vonnegut would be high on the list, as would John Perry Barlow, Isaac Asimov. For living authors, I’d say Jane Smiley, Margaret Atwood, Cory Doctorow, Matthew B. Crawford… wow, I could probably go on for some time with this list. And of course, the meal would have to be New Mexican food… maybe green chile enchiladas or carne adovada, with sopaipillas. Some Mexican beer or iced tea to wash it all down. And a New Mexico sunset over the Sangre de Cristos would be the right setting, I reckon.

What has most surprised you about the response you've received from readers on this book?

Lots and lots of horse people have written to tell me how much they loved it (especially Gizmo…), which wasn’t too surprising. But the thing I hadn’t expected was having so many “non-horse” people write to tell me about their own dreams and fantasies, some completed, others never pursued. I think this idea of a man and his horse, traveling out alone and facing enormous challenges, and finishing a long ride against all odds…. well, it seemed to resonate with so many people, and I was surprised. It has been a very profound experience for me, knowing that Gizmo and I have touched people’s lives in that way, and I’m humbled by it.

I had to dig through dozens of photographs from 40 years ago. Along with them were piles of news clippings and other memorabilia that I hadn’t looked at in decades. Reading through my log books again was so gratifying. There were so many little details I had forgotten, and when I went through all of these boxes of pictures and notes and letters and articles, a huge flood of these memories just came back, all of a sudden. Some of it was painful, but a lot of it was really fun and rewarding.

What was the book that most influenced your life — and why?

That’s impossible for me to answer. As far as the ride went, I have to say “Tschiffely’s Ride”, written in 1933 by Aime Tschiffely. Though not what I would describe as a tremendously well written book, the story was so compelling to me when I read it as a teenager, it eventually spurred me to making my own ride with Gizmo. But even before that, I had read and reread Kerouac’s “On The Road”, which pushed me toward hitchhiking and riding a lot of freight trains when I was a teenager. The book probably somehow steered my warped brain into the idea of a long ride, I don’t know, but it certainly helped to define me as a wanderer at a very young age.

I have a couple of blogs. One is for the book and one is just a personal one. If you're interested in reading short things, my personal site is probably the best bet. If you want to read chapters from the book, I post them there on the John & Gizmo site. Here are links:

For my own music, just go to my Bandcamp site. Free downloads there:

To find anything else about Gizmo and me, Google, DuckDuckGo, Ecosia, and other search engines are your friend.