John Everson - An Undead Witch, Comic Relief and a Haunted House
Posted on 5th of July, 2019 by Naomi Bolton 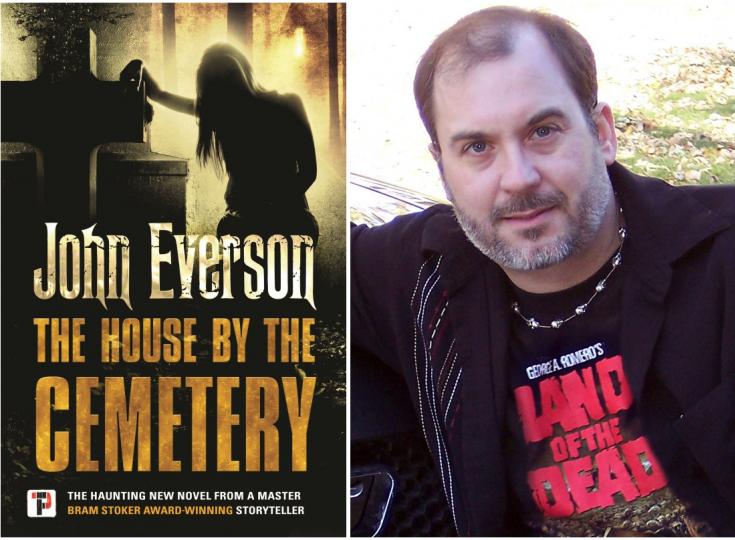 John Everson is a staunch advocate for the culinary joys of the jalapeno and an unabashed fan of 1970s European horror cinema. He is also the Bram Stoker Award-winning author of Covenant and its two sequels, Sacrifice and Redemption, as well as seven other novels. Over the past 25 years, his short fiction has appeared in more than 75 magazines and anthologies and received a number of critical accolades, including frequent Honorable Mentions in the Year's Best Fantasy & Horror anthology series. In addition to his own twisted worlds, he has also written stories in shared universes, including The Vampire Diaries and Jonathan Maberry's V-Wars series, as well as for Kolchak: The Night Stalker and The Green Hornet. As our Author of the Day, Everson tells us all about his book, The House by the Cemetery.

Please give us a short introduction to what The House by the Cemetery is about.

The House by the Cemetery is about a down-on-his-luck carpenter, Mike Kostner, who gets roped into rehabbing an old abandoned house near a cemetery. He’s lost his wife and is about to lose his house if he doesn’t quit drinking and get some steady work. So… when his friend comes to him with the idea of turning an old house reputed to be haunted into an actual haunted house attraction for Halloween, he really can’t say no. And while he wants to walk away when he finds bones and evidence of satanic rituals inside, he sticks around because he really needs the money. Then when a cute girl shows up who takes an interest in him and helps him with the work, well, he has to finish the job! There’s only one problem – the house already IS haunted. And when the haunted house staff open the place to the public, the previous occupant has far more sinister plans for the Halloween crowd than cheap scares. 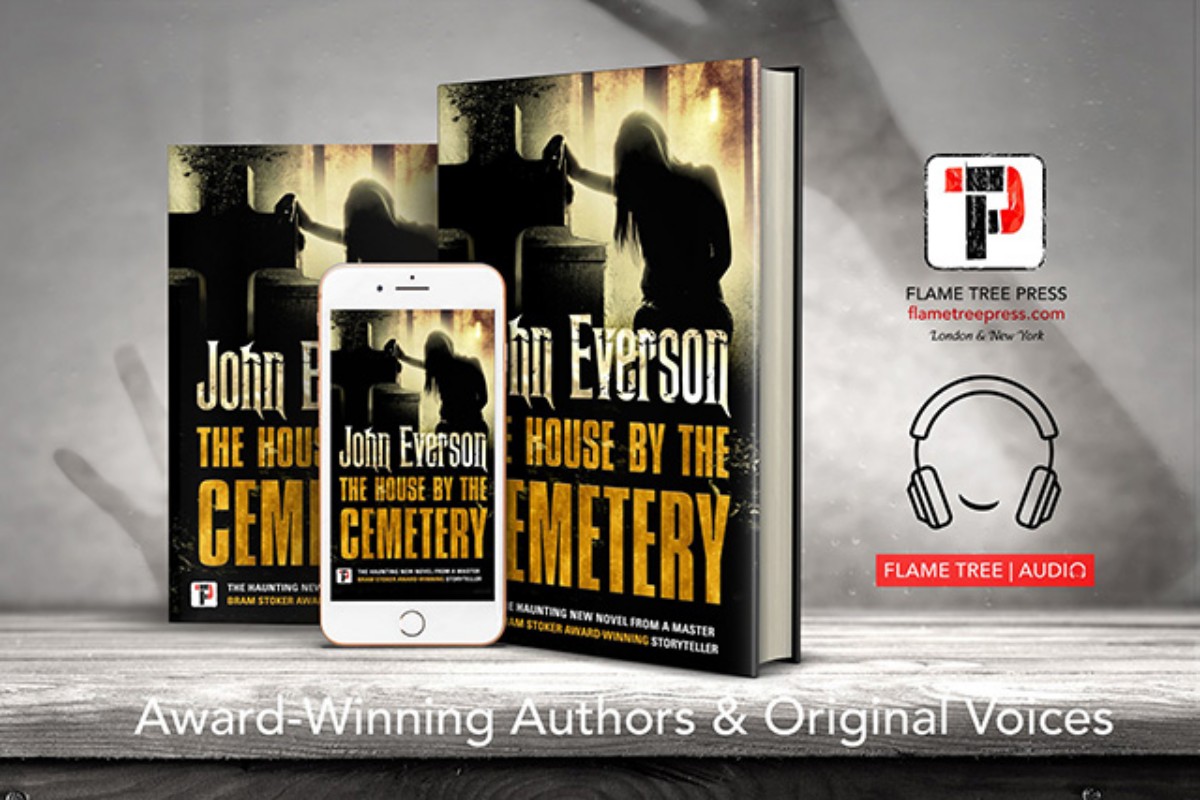 What inspired you to write about an abandoned house by a cemetery?

Bachelors Grove Cemetery is a real place –it’s an abandoned cemetery set in the middle of a forest preserve near the Midlothian Turnpike (which isn’t really a turnpike – just a forest preserve road!). It’s often referenced as one of the most haunted places in Illinois. I grew up a few miles away from the place, and heard about the ghosts that haunt it all my life. When I got my first job at a newspaper, I wrote a Halloween feature story about it, and I’ve written a couple of short fiction stories over the years set there. It’s a great place for horror stories, because there already are so many tales of wandering ghosts attributed to it. And back in the ‘60s, there were actual devil worship ceremonies performed there. When I wrote my second short story about Bachelors Grove for an anthology a few years ago, it occurred to me that I could set a whole book there. When I did, I took substantial liberties – one of the oft-told tales of Bachelors Grove is that a house appears to people, but when you walk towards it, it disappears. For The House By The Cemetery, I decided to make the house a real concrete setting haunted by the ghost of a witch who yearns to come back to life. There was a real house there many decades ago, but only the foundation remains today.

Why horror - what drew you to this genre?

I blame The Twilight Zone, Night Gallery and The Outer Limits! When I was growing up, I read mostly science fiction stories, but I watched all of those anthology series which all featured some creepy tales and great twist endings. When I began trying to write fiction many years later, it wasn’t the “aliens” that popped into my head to write about, it was dark, unexpected twists. 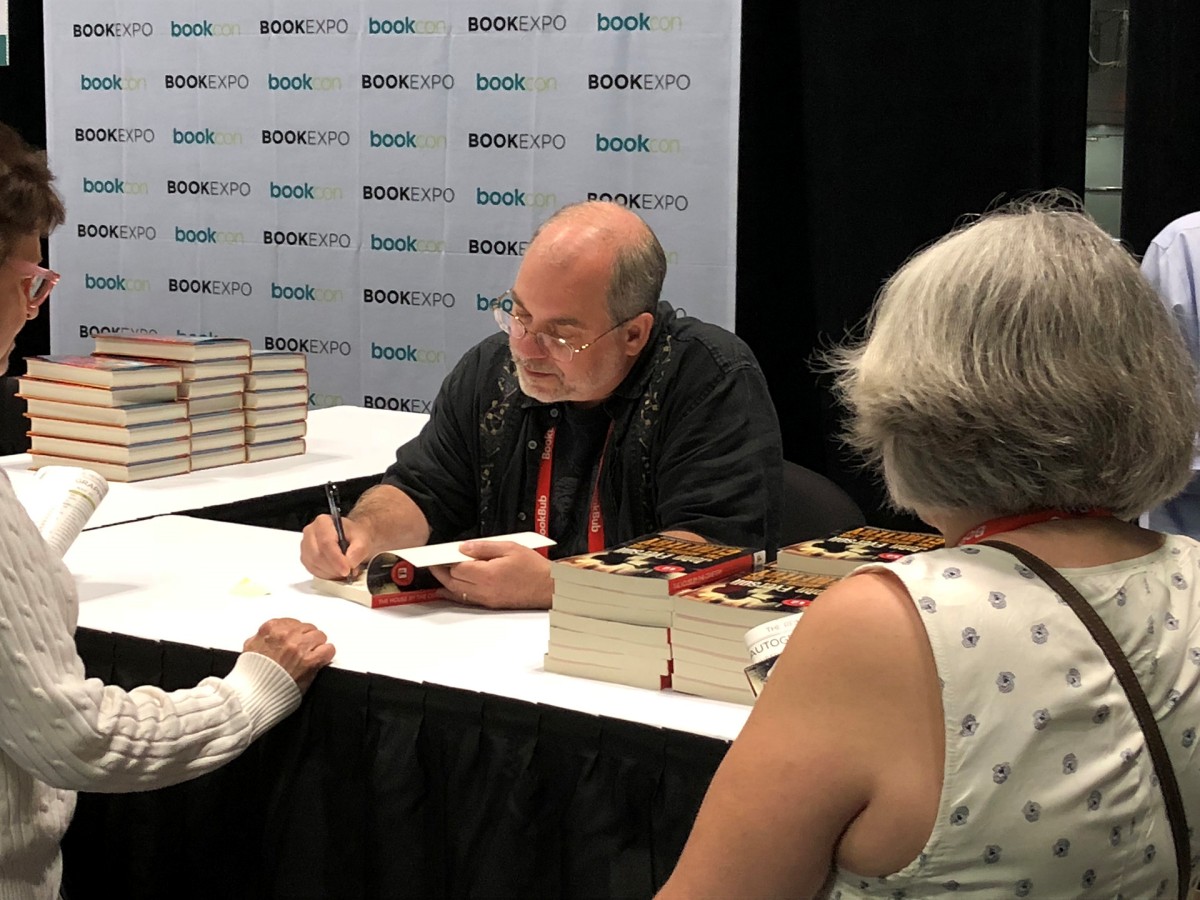 The book maintains a creepy air of suspense throughout. How did you pull this off?

The setting helps a lot… I mean, you’ve got an old, remote cemetery, an abandoned house with secret rooms and evidence of somebody conducting dark rituals. The house is really a character in the story as much as the witch. And as the haunted house cast set up the place to have rooms fashioned to look like classic horror movies – from Nightmare on Elm Street to Hellraiser to Suspiria – you’ve got a great breeding ground for twists and scares!

Your characters, despite being in horrible situations, often lighten the situation with dark humour. Do you think this is important in horror fiction?

I don’t know if it’s important in horror fiction overall, but it’s important to me! I always approach life with a wisecrack – I don’t think I’ve ever been in a tension-filled situation without cracking a joke. So… my characters frequently do the same – it’s just the way I think about dialogue, in real and fictional life. I think for some readers, it can probably break the tension that the horror plot elements are trying to create, but for others, it makes the story more enjoyable and relatable.

Is there anything you're too scared to write about?

I don’t typically write about straight-up serial killers, because they’re too real. You can pick up the newspaper any day of the week and find stories about killers who have ruined the lives of others for no reason. The thing I’m most scared of personally is the immoral cruelness that humans often display. That doesn’t entertain me, so I don’t write about that. Now… I do have lots of bloodshed in my novels, but it’s nearly always part of some occult ritual. Once you set a story in the realm of the supernatural, the horrible events becomes escapist fiction to me, vs. just a horrible recounting of something that could happen in real life. 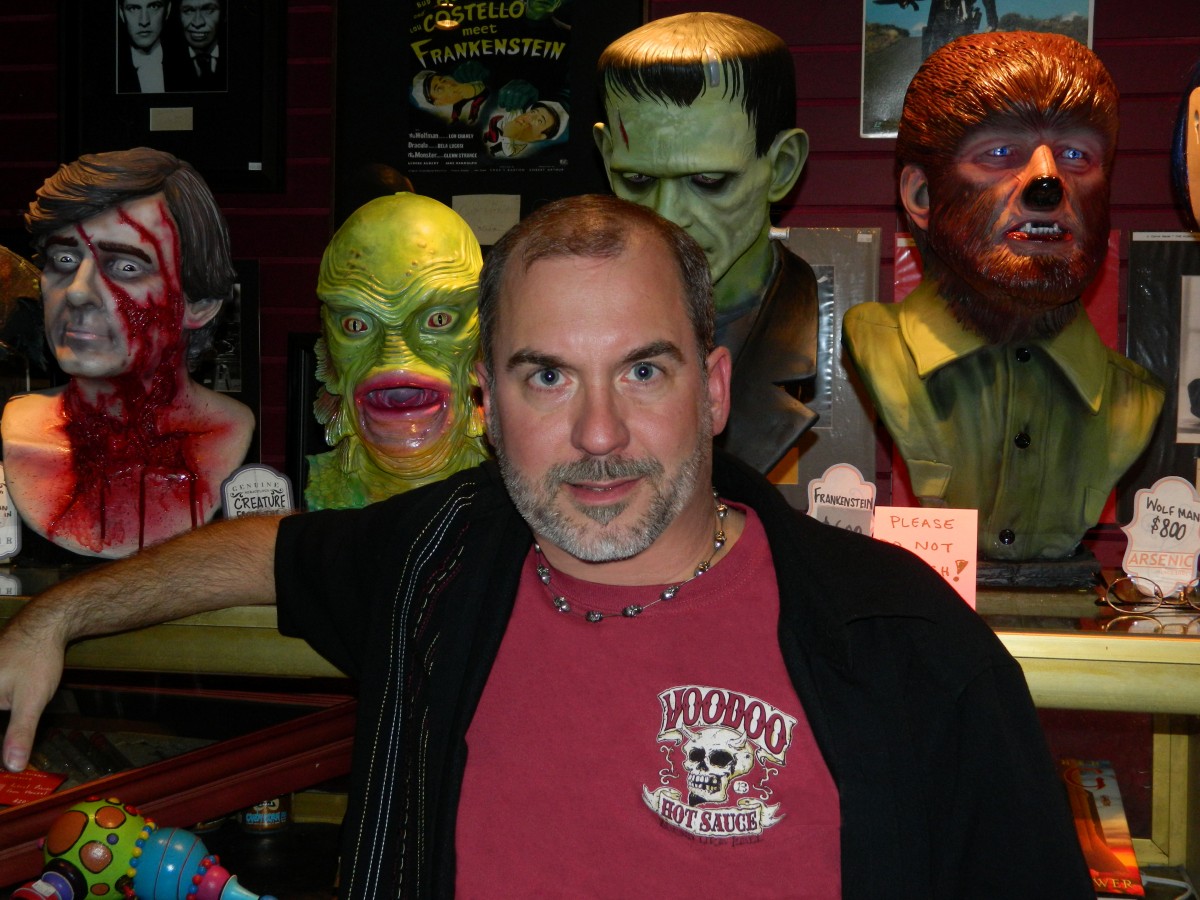 I love to cook and garden. And I’ve done a lot of digital art – for several years I created book covers for other presses like Twilight Tales, Delirium Books, Bad Moon Books and my own imprint Dark Arts Books. But my first love is actually music! I have played keyboards since I was five, and used to write a lot of pop songs that I always hoped to develop and record professionally with some other talented musicians. In my 20s and 30s I never quite found the right group of guys to “take it on the road” with though, so eventually my songwriting stopped and my fiction writing took over as my prime creative outlet. You can still hear some of my old demos on my website (very rough recordings – just songs I sketched out that I wanted a band to develop at some point).

After receiving such positive feedback for your previous books, have you found the expectations that came with this one difficult to deal with?

The House by the Cemetery was actually my 10th novel, and my third “start” with a publisher (my first five novels were sold to a mass market publisher – Leisure Books, and then I did novels for Samhain Publishing for a few years). So… while there is pressure with every book to try to do something new, entertaining and fresh, I’m used to that feeling at this point! While you’re writing, you always question and second guess yourself about whether it’s any good or not… but you just have to power through the inner critic, “set it free” and see how people respond!

Do you suffer from writer’s block? What do you do to combat it?

Not really. My biggest problem is carving out dedicated time to write. When I set aside time, I typically write fairly quickly. But with each novel, I’ve had a little bit of a different writing schedule based on what other things are going on in my life at the time. 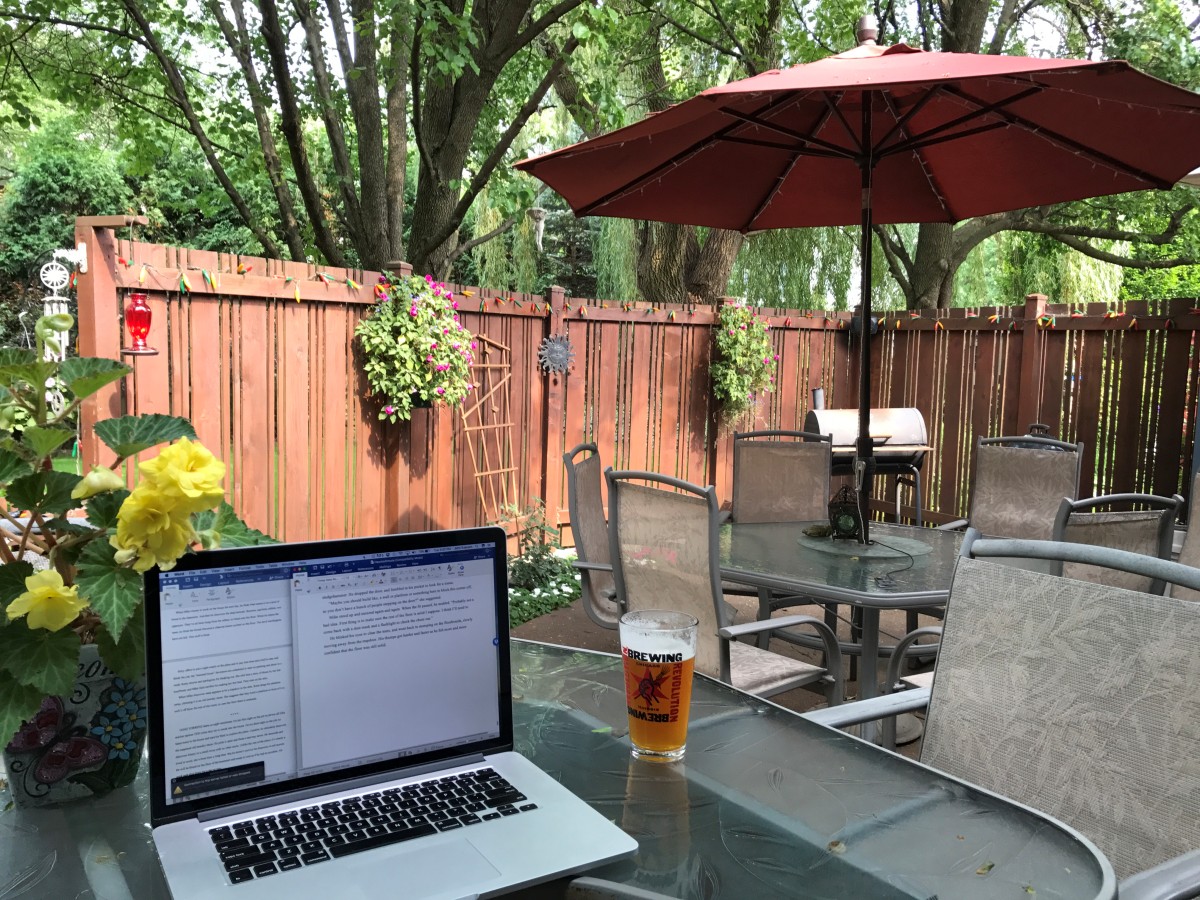 All of the above! I do mainly write on laptop, though I have had instances where I took a notebook to a beach, for example, and wrote a few hundred words long hand. I type much faster than I scrawl though, so mainly I work on a laptop.

Over the years, I’ve tried every kind of writing schedule. Nights, mornings, 12-hour stints on the weekends… I wrote much of my fourth novel Siren largely in the mornings in my home office before I went to my dayjob. Got up at 5:30 every day for three or four months and worked for at least an hour before driving to work. I HATE mornings though, so I haven’t repeated that schedule. I wrote a lot of NightWhere at the bar I built in my basement at night, listening to The Cure.

I used to travel a lot for work, so I also got into the habit of writing at bars. Whatever city I was in, I would seek out the nearest Irish pub and set up shop in a dark corner with my laptop each night I was in town and work. As long as the place has comfortable seats and good music, I’m a happy camper – finger food and someone who keeps bringing you beer! The last couple years I haven’t been travelling much though, so most of The House By The Cemetery and my latest, The Devil’s Equinox, were written at home – on my back patio on weekends or in the basement listening to Delerium, Conjure One, The Cure, Cocteau Twins and other dark ethereal CDs. 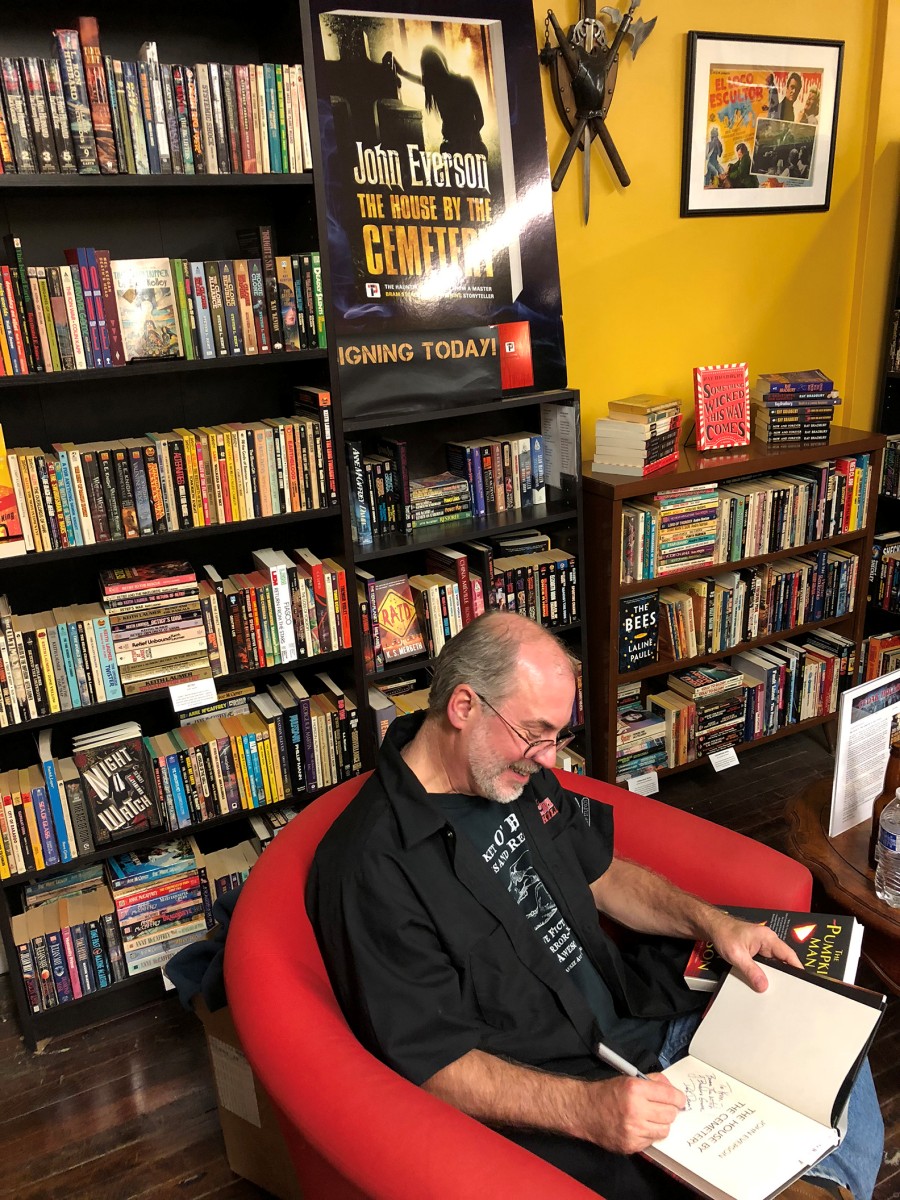 I just started working on a novel set in New Orleans about zombies brought back to life by a voodoo spell to take vengeance on adulterers. It’s a concept I first toyed with in the title story for my second short fiction collection, Vigilantes of Love. I’ve wanted to do a long-form take on the story for many years!