John Pearce - Part-Time Parisian
Posted on 27th of May, 2016 by Naomi Bolton

John Pearce spends most of his time writing at home in Sarasota, Florida. But for two months every year, he explores the quaint streets of Paris and enjoys the peace and quiet of the 17th century Mazarine Library in the Institut de France while working on his latest book. Pearce's debut novel, Treasure of Saint-Lazare, received rave reviews, reached a #29 of all Kindle books on Amazon and was picked as the best historical mystery of the year by Readers' Favorite. In this interview, Pearce gives us some behind-the-scenes insights in the creation of Treasure of Saint-Lazare, talks about art and how the city of Paris is a main character in his books.

Please give us a short summary of Treasure of Saint-Lazare

The best stories put ordinary people into extraordinary and threatening circumstances, then watch them work their way out.

For Treasure of Saint-Lazare I took the true story of a priceless Old Master painting, Raphael’s “Portrait of a Young Man,” which the Nazis stole from a museum in Poland soon after the war began. They fought about it among themselves, but ultimately Hitler awarded it to Hans Frank, the military governor of Poland, who was one of the most infamous of the Nazis -- the Nuremberg tribunal hanged him after the war.

As the Russians closed in on Poland early in 1945, Frank sent much of his loot home, to Munich. The Raphael painting was on the manifest but it didn’t arrive and hasn’t been seen in public since. The Polish government has said it still exists, somewhere. If so, it would be immensely valuable.

I took that real-world situation and created the story of a gang of really bad guys who want the painting at all costs, and think nothing of killing for it.

The protagonist is Eddie Grant, a Franco-American businessman who has suffered much for the painting. His family was murdered, which still depresses him years later. And then out of the blue arrives the chance to clear it all up, in the form of Jen Wetzmuller arriving at his home in Paris with a letter for his long-deceased father.

He returns with her to Sarasota, Florida, to help her dig into the matter and they fall back into bed, which is where they were when he last saw her 20 years before. That affair doesn’t end well, but he does make progress in his quest, even though in the meantime he’s kidnapped and barely escapes with his life.

This was your debut novel. How was the experience?

Difficult but immensely gratifying. I started on it twice. After a few months I realized that daily and magazine journalism don’t prepare you to write an 80,000-word book, so I put it on hold while I organized a DIY novel-writing course.

I was pleased with the results. Treasure ultimately reached a ranking of #29 among all Kindle books, and was chosen the best historical mystery of the year by the Readers’ Favorite review site.

What did you personally find the most interesting when researching the book?

I enjoy searching out good scene locations in Paris, and I spend time on it. I take a lot of pictures, which I refer to in the writing and revision stages. They are a big help.

I recently posted a short article on my blog about how I found the site for the final, climactic scene of Last Stop: Paris, the sequel to Treasure, and I included some of my pictures. That’s at PartTimeParisian.com

Treasure of Saint-Lazare involves priceless art.  What type of art do you enjoy most yourself?

I do enjoy paintings, and my wife and I buy a few of them from time to time, especially oils from French artists we’ve met over the years. Most but not all paint in the impressionist style.

But I also like music, opera, and ballet. We got really lucky last year when we were chosen to be extras in a short film being made for the Paris Opera Ballet. We spent an entire day on the immense main stage of the Bastille opera house, which was a great experience for an opera lover. I wrote about that on my blog, too, at http://goo.gl/qNyNGA

Your book makes one want to delve further into finding out which other artworks that were looted by the Nazis are still missing. What inspired you to use this as a theme for your book?

A lot of factors went into the story decision. Paris had to be a character itself, because that’s my favorite city and it’s where we live part of each year. The story also needed to refer back to World War II, because that’s the defining event of the 20th Century and a subject that interests me greatly. And it needed something German in it, because we lived in Frankfurt as journalists for three years several decades ago and still have friends there.

Your characters are well developed and relatable.  Are any of them based on real people?

I did my best to be certain none of them is a recognizable clone of anyone I know, but I suppose all of them have their roots in people I’ve met along the way. They are such mixtures that I’ve lost track of who is based on whom, and the largest part of any of them comes from my imagination.

The book also focuses on events that took place in 1944 during WWII. How hard was it to fuse the events in your book with the real WWII events and make it believable?

This was one of the most interesting parts of the writing and at the same time one of the easiest. When we lived in Germany we visited many of the wartime historical sites, and I’m familiar with the historical timeline of the war.

As one example, when the Nazi Erik Kraft is driving the painting from Poland to Paris, he has to change course to avoid an Allied air attack on the little town of Memmingen, where I did some research years ago. Most of the Memmingen material didn’t make the book, but its spirit is there. It will probably show up again.

What did you find the most challenging about writing Treasure of Saint-Lazare?

The sheer volume of work involved. I’d say the editing and revisions were the most time-consuming, but creating the first draft was the most painful – it always is. But I did enjoy it all, because part of my decision to write was a reaction to the boredom of retirement.

You wrote Last Stop: Paris as a sequel to Treasure of Saint-Lazare.  How are the two books related? Can they be read as standalone novels?

Last Stop: Paris is a true sequel and completes the story. You could read it alone, but the experience will be much better if you read Treasure first. 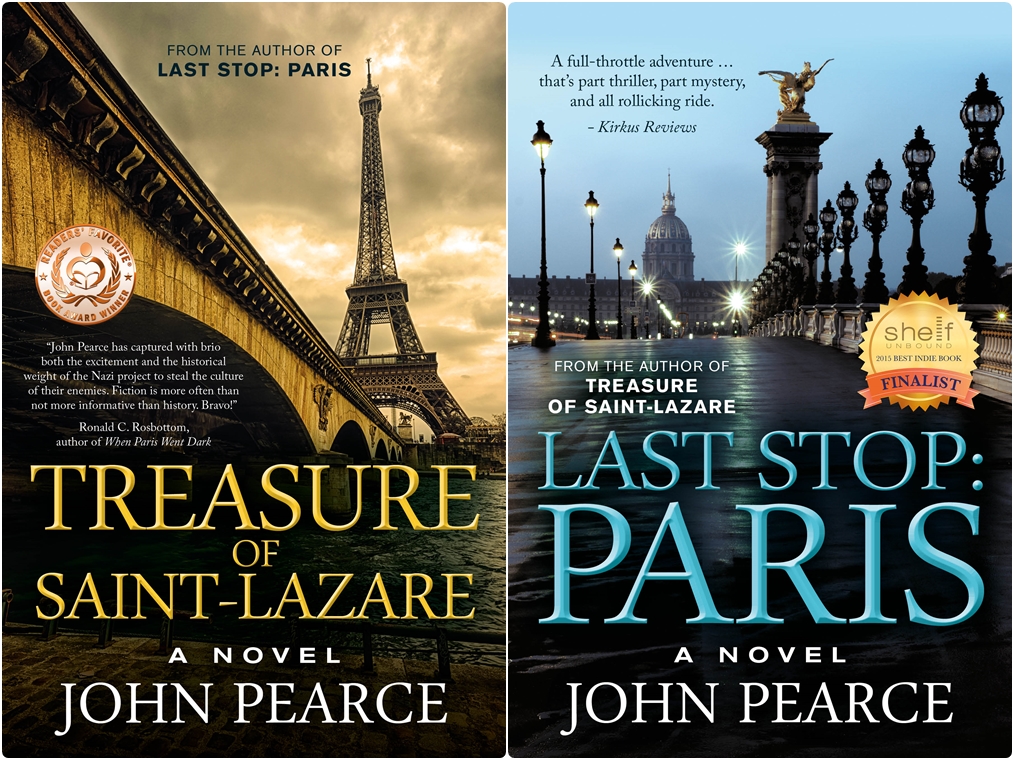 What is it about Paris that captivates you?

I’ve thought about that question a lot, and I still have a hard time coming up with a definite answer. Physically, Paris is a beautiful place, and that’s important. In addition, the French have a keen sense of priorities in their daily lives. They put as much effort into leisure and family time as they do their jobs, while at the same time maintaining a level of work productivity that’s almost as high as the United States.

And the French are fascinating conversationalists. They haven’t refocused their educational system on STEM training to the extent we have, so they know a lot about the arts, about books, about politics. And they have informed opinions about everything.

On top of all that, the food is good, the sidewalk cafés are fabulous, it’s very walkable and it has an outstanding public transit system, which I use every day. All the parks have wifi and admission to the city-owned museums is free. It’s a very civilized place to live.

The downside is that they love to demonstrate against the government, and it can be really annoying when the métro is closed for a one-day strike even if you recognize, as I do, that they developed their democracy slightly differently from the way we did.

Tell us a bit about your writing habits. Do you write early in the morning, or through the night? Pen or computer?

I spent a lot of years working for morning newspapers, so I write most efficiently in the afternoon. Mornings are for exercise (I’m a walker), marketing the books, and other mundane tasks. I try to write by 1pm and stick at it until 5.

Of course, as any novelist will tell you, I’m always working. I keep a small recorder in my pocket for plot ideas. Dragon transcribes it into Evernote, which is where I organize everything.

I tend to do first drafts on my MacBook Pro, using the wonderful app Scrivener. I do edits and rewriting on paper, then post the changes back into Scrivener. After several rounds like that, the manuscript goes to my editor as a Word document, which Scrivener creates easily. She reviews two rounds of changes, then proofreads the final version.

When I’m in Sarasota I write at home. When we’re in Paris I go to the Mazarine Library in the Institut de France, a beautiful 17th-century library with leather-covered tables, just across the river from the Louvre. 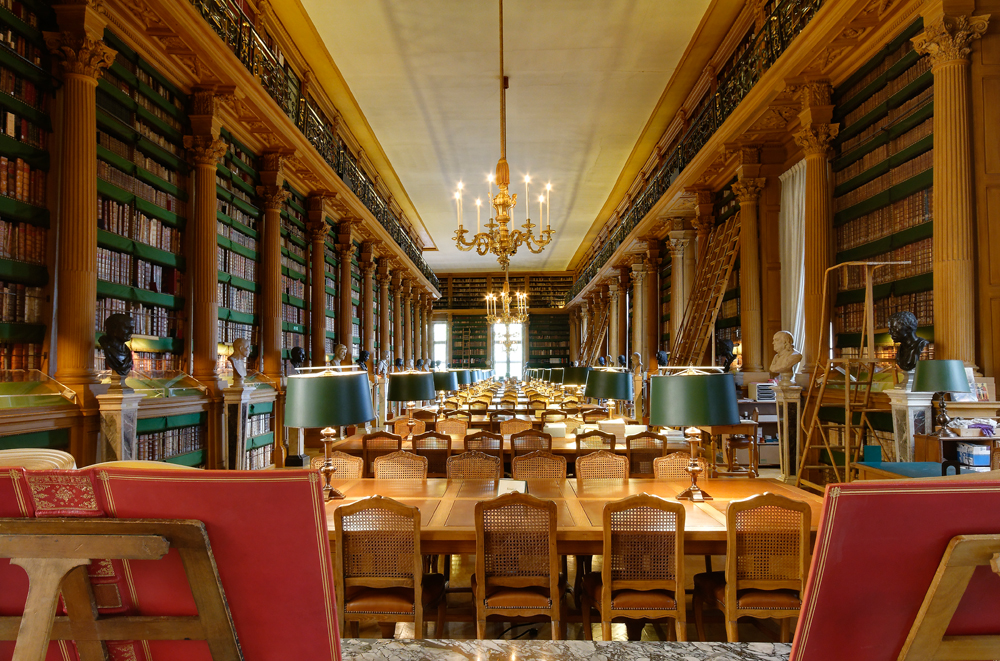 If you could meet any historical figure, who would you pick to have a conversation with?

Hard question because there are so many choices. In American history, I’d love to talk to Thomas Jefferson and Alexander Hamilton, because they both had so much influence on what we’ve become, and they had very different ideas of what kind of country the United States should be.

In France, I’d very much like to talk to Emile Zola, whose protests (“J’accuse”) shaped the Dreyfus case and helped reverse a tragic miscarriage of justice.

I am well into the first draft of another Eddie Grant novel, as yet untitled, which will be set in Paris, Miami, and either Hungary or Poland. It will have some important new characters.

After that, I’m anxious to start on a wartime story featuring Eddie’s father Artie Grant, an American military officer born in Paris, who spent the war as an intelligence agent, much of it behind German lines.

I have an eclectic blog, Part-Time Parisian, where I write about Paris affairs that interest me, sometimes in the arts, sometimes not. I also review books and write a little about my own books, although I try not to over-focus on them. It’s at this link: http://parttimeparisian.com, and there’s a contact page for anyone who wants to reach me, and of course links to the books.

My books are on Amazon, and are available in Kindle, paperback and audio versions. My author page, showing both books and some background information, is at this link: http://goo.gl/fkehgv

I should add that I’m always happy to provide copies to reviewers, including reviewers of audio books.