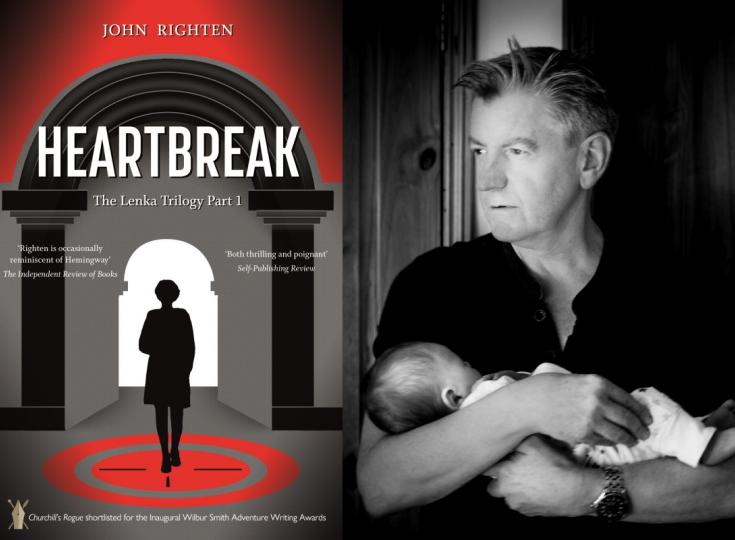 John has delivered medical aid to orphanages and hospitals across the globe, including Romania during the revolution, South America, and Bosnia during the war. Now he has woven the tales of the extraordinary characters he met with into his thrilling novel, ‘Heartbreak’, the first novel in The Lenka Trilogy. 'Heartbreak' won the 2020 Page Turner Spectrum Award. He has written three trilogies: The 1930's based epic adventures, The Rogues Trilogy; the 1960s thrillers, The Lochran Trilogy, and now the 1990s odyssey, The Lenka Trilogy. 'Churchill's Rogue', the first novel in The Rogues Trilogy, was shortlisted for the Wilbur Smith Inaugural Adventure Awards. As our Author of the Day, he tells us about Heartbreak, The Lenka Trilogy.

Please give us a short introduction to what Heartbreak, The Lenka Trilogy is about?

The lead character, Lenka Brett, is a young, unworldly woman who teaches in an orphanage in Ireland. After watching harrowing footage of the terrible conditions of orphanages in Romania, she joins a humanitarian aid convoy of colorful rogues. She falls in love only to discover that her lover has a dark secret, which leads to the mission ending in tragedy. But Lenka is astute and resilient and earns the respect of those on the convoy. Despite her pain, she and soon becomes their leader.

Was there anything in particular that inspired this story? That made you want to tackle this?

I worked on fourteen aid convoys in the 1980s and 1990s that took me to Romania, Bosnia during the war, and later South America. Heartbreak is based on those days, and on the roguish characters I met, both good and bad.

Playing poker helped me through college. I can drive anything. Motorbikes are a passion that led me to ride a British Army Enfield across India in aid of UNICEF, and my voluntary work covers building castles in the South of France to work in the kitchen of a mental heath facility a few blocks from New York’s Times Square.

Tell us more about Lenka Brett. What makes her so special?

Lenka learns of the plight of children living in inhuman conditions and wants to help. But she has never traveled beyond Ireland and makes many mistakes during her aid mission. While others crumble at the horrors they see and the dangers they face, she survives, learns, and guides others to safety. Her determination, her bravery and her sharp wits are what make her special.

Why did you title this book "Heartbreak"?

The title has a double meaning. Lenka has a weak heart and never knows if she will wake up the next day, but the novel also covers the aftermath of a tragic love affair. The titles of the second and third novels in her trilogy cover the stages that for many follow a broken heart, Resilience and Reflection.

This is the first book in The Lenka Trilogy. Can it be read as a standalone? How do the other books in the series tie in with this one?

Heartbreak can be a standalone novel, covering Lenka’s experiences in Romania and later Bosnia during the war, but the twist at the end will make readers want to read more. The novel is permeated with characters like ‘Holey Mary’ (Holey due to her threadbare clothing), Klay, the avuncular, black ex-paratrooper, and many more that will endear themselves to readers, and will lead to many enjoying the entire trilogy.

Lenka, because I’m a man. But I wanted to pay homage to the women I met who volunteered to work on dangerous aid missions. Men like me were often up for the adventure, spurred by ego and testosterone, while the women never lost their focus on getting the aid through to those desperately in need of it. Lenka and I are opposites in character. How she deals with each crisis is very different from what I would have done, and was a real challenge, but an immensely enjoyable one to write.

Readers say the characters and emotions in this story feel very authentic. How did you pull this off?

I ask myself several questions. Is this a thriller worth telling? Would I buy it? Would readers enjoy it? If the answer is yes to all, then my research begins. A year later, I finally sit down and write.

I write the first line of the story and then the final line that contains the twist that ends it.

I’m busy with my family, my job, and my family, but I carry a notepad with me all the time to jot down ideas. At night when my family is asleep, I set down all those ideas on the page, and usually reject 99% of them before I crawl off to bed.

I have finished the first draft of the manuscript for my final novel, The Englander.