Justin Alcala - When Death Needs a Vacation
Posted on 31st of October, 2021 by Naomi Bolton 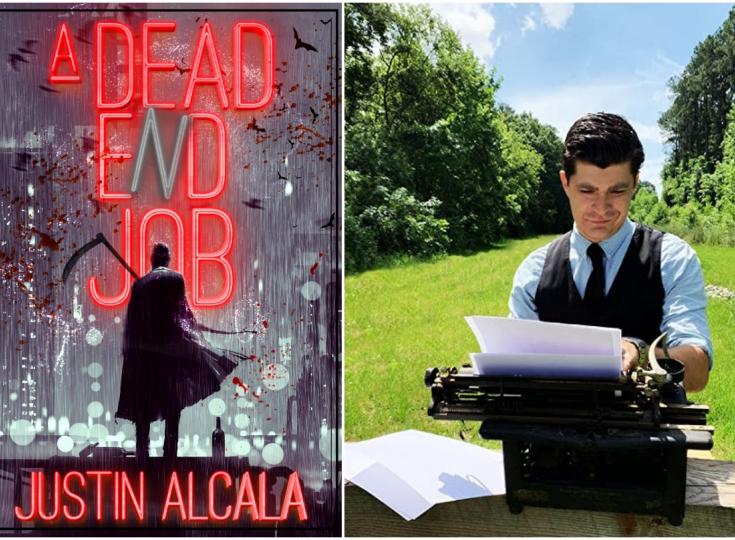 Justin Alcala is a novelist, nerdologist and Speculative Literature Foundation Award Finalist. He’s the author of four novels including Consumed, (BLK Dog Publishing) The Devil in the Wide City (Solstice Publishing) Dim Fairy Tales (AllThingsThatMatterPress) and A Dead End Job (The Parliament House). His short stories have been featured in dozens of magazines and anthologies, including It Snows Here (Power Loss Anthology),The Offering (Rogue Planet Press Magazine) and The Lantern Quietly Screams (Castabout Literature). When he’s not burning out his retinas in front of a computer, Justin is a tabletop gamer, blogger, folklore enthusiast and time traveler. He is an avid quester of anything righteous, from fighting dragons to acquiring magical breakfast eggs from the impregnable grocery fortress. Most of Justin’s tales and characters take place in The Plenty Dreadful universe, a deranged supernatural version of the modern world. When writing, Justin immerses himself in subject matter, from stuffy research to overseas travel. Much to the chagrin of his family, he often locks himself away in his office-dungeon, playing themed music over, and over, and over again. Justin currently resides with his dark queen, Mallory, their malevolent daughter, Lily, changeling son, Ronan, hellcat, Misery and hound of Ragnarök, Fenrir. Where his mind might be though is anyone’s guess. As our Author of the Day, he tells us all about his book, A Dead End Job.

Please give us a short introduction to what A Dead End Job is about.

“A Dead End Job” is what happens when Urban Fantasy and Absurdist Fiction have a baby. Death is a workaholic, and with the help of his I.T. guy, Jumbo, he’s handled his daily expiration goal through modern technology. However, Death stressed from centuries of supernatural creatures trying to cheat him (vampires, zombies, wraiths), is about to have a nervous breakdown. So what does he do? He hires Buck, a Chicago hitman who just died during a job, as an intern. If Buck, the lovable contract killer, can take care of the creatures who cheat Death while he’s out on vacation, then Buck will avoid the pits of eternal Hell.

Why did you decide to write a story about someone who becomes Death's intern?

I made a deal with Death centuries ago. If I wrote a book about him, he’d grant me eternal life. Just kidding. Ten years ago, I created the Plenty Dreadful world in my head, a twisted alternative dimension of our own world with supernatural shenanigans. There were three major monster universes that I wanted to explore. The first was Hell, which was a cheap knockoff of our corporate work environment. The next was The Lands of Change, a dark, but beautiful twist on fairy courts and their vanity addiction. The third, though, was Death and the Underworld. I wanted to put a spin on Death’s ominous side, and make him more of a sorry-sap. In addition, I wanted a protagonist that reflected the many grimy, but fun characters I met in the Second City, along with my own weird quirks. I wanted the protagonist to be broke, stumbling through life, and have unpacked baggage… like me! The plot wrote itself from there. 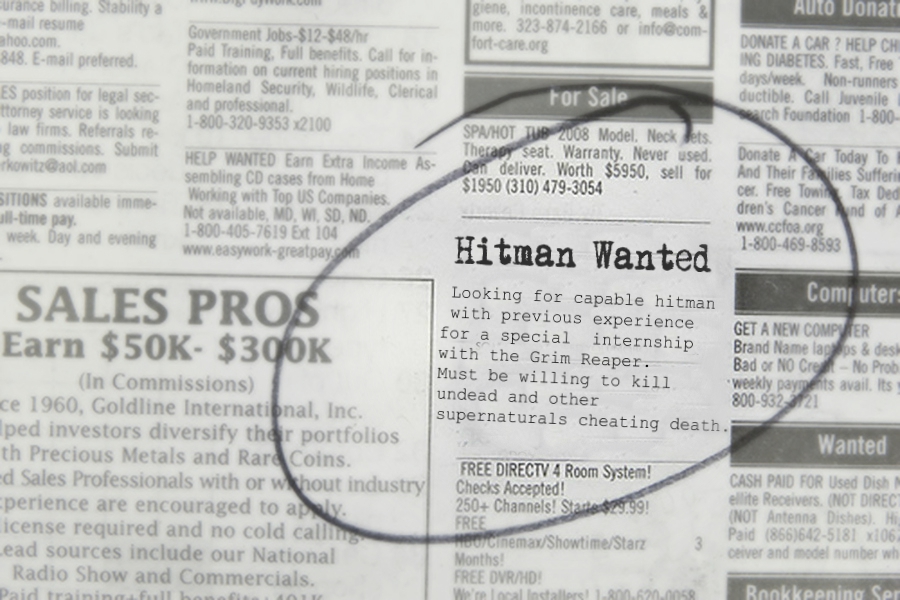 Tell us more about Buck Palasinski. What makes him tick?

Oh, poor Buck. He’s a guy that can’t seem to get it right. He grew up in an abusive, poverty-stricken family, joined the army where he was eventually injured, then he was sent home with little motivation. His only real passion in life (besides playing D&D), was his sweetheart, Denise, who was tragically killed in a coffee shop. From there, the lost soul that is Buck takes up employment as a hitman, relying on his thirst for revenge, sniper training, and crooked sense of humor, to get him through life. Even before he’s killed, Buck can’t seem to get anything right, and lives on his ability to laugh at himself to survive humanity’s machine.

I am an expert of useless skills. I am a big history nerd who can hold my own with any European and American timeline discussion. I am a Dad Joke aficionado. I also play pretend with friends on the weekend, rolling dice in any tabletop roleplaying game invented. Oh, and I moonlight as a superhero.

The book includes a lot of humor and banter. Why do you take this approach?

Ever think about a career that makes you feel icky? I’ve worked questionable jobs in my past, lived in even more questionable areas of Chicago, and have friends that did the same. The one thing you can always count on with someone who survives the daily rigmarole of security nightshifts, military service, or just plane dirty jobs, is that they are hilarious. It gets them through the day. The most banter-rich people I’ve ever met are waste management associates, morticians, heck, even teachers. So when it came time to deal with the darkest of all jobs, Death, I felt like the entire narrative needed to be laced in this wonderful perspective that comes with living in the muck of life. You need fart jokes to get you through life, trust me.

Are you a plotter or pantser? Do you plan out your book before you start writing?

I am definitely an evil plotter, both in my plan for world domination and my manuscripts. I know the book’s beginning, rising action, climax and end before I ever put a word down. However, it’s the sticky matter in between, the narrative gristle, that is organic. That’s the part you stumble on in the dark, and maybe the part that gives your writing a soul. Neil Gaiman said it best—

“Sometimes it’s [writing] like driving through fog. You can’t really see where you’re going. You have just enough of the road in front of you to know that you’re probably still on the road, and if you drive slowly and keep your headlamps lowered you’ll still get where you were going.”

Do any of your characters ever take off on their own tangents, refusing to do what you had planned for them?

It’s a rude thing, characters having their own agendas, and it’s an inevitable part of writing. It’s why writers must be adaptable. I’ve had a plethora of characters refuse to fall in love, commit evil, or die like I wanted them to. The thing is, if I listen to them, and write it their way, it always works better for the plot. Unlike my kids, whose own tangents only lead to ice cream for dinner.

What do you hope readers will take away from this book?

Wisdom is often cliché and pain is generally witty. Never fault an insightful man for their thoughts or mistaken a clever man as a sage. A Dead End Job is loaded with jokes that hide the pain we all travel through on this journey we call life. It’s subtle, but hopefully readers connect with it, and it helps them deal with their own daily torments. However, there’s also some direct sage advice in the book that shows how old adages can deliver happiness. It’s a literature yin and yang of life advice from a guy who shouldn’t be giving it to anyone.

Do you like children’s horror? Oh, good! The Last Stop is a book about a tough seventh-grade girl who blames all her social issues on her little brother. That is until the local supernatural of her quirky new town have their say. This book is due out late 2022.

Cthulhu more your thing? No problem. Taming of the Cthulhu, an absurdist fictional history piece, will have you quaking in your bones. Shakespeare’s early years were lost in the history books. That’s because he joined a group of recluse buccaneers down the Spanish Main in order to recover an island of gold gifted to The Old One in order to avoid world decimation. This book is due in 2023.

Are you a comic book nerd like me? I’ve teamed up with some writers and artists from DC and Image comics to create a bizarre story about the leftover gods of Earth who retreat into a garbage can of a world in order to spend the rest of their eternity. Apollyon is currently being agented and shopped for 2023 to 2024.

Join me on all of my social media, found at www.justinalcala.com or join your favorites by following the links below. And as always, thanks for reading my writing. 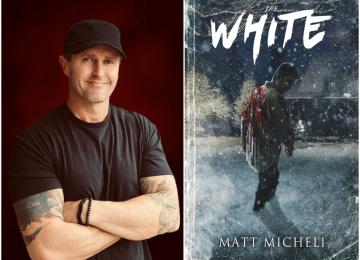