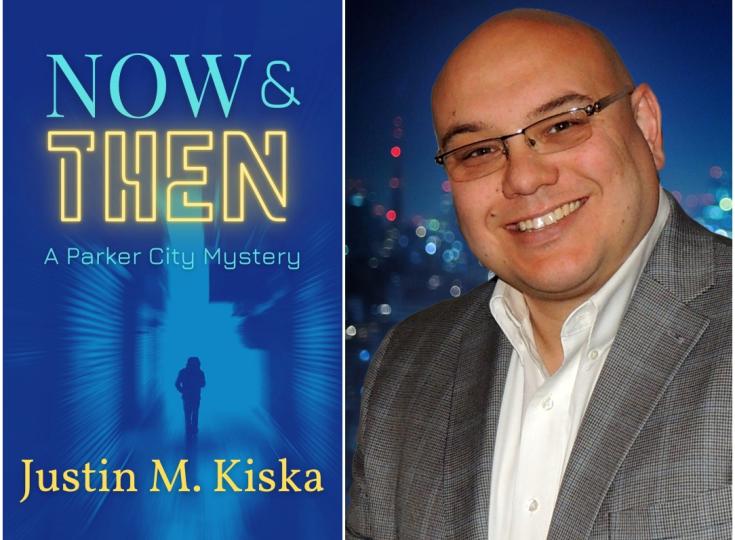 When not sitting in his library devising new and clever ways to kill people (for his mysteries), Justin can usually be found at The Way Off Broadway Dinner Theatre, outside of Washington, DC, where he is one of the owners and producers. In addition to writing the Parker City Mysteries Series, he is also the mastermind behind Marquee Mysteries, a series of interactive mystery events he has been writing and producing for over fifteen years. Justin and his wife, Jessica, live along Lake Linganore outside of Frederick, Maryland. As our Author of the Day, he tells us all about his book, Now and Then.

Please give us a short introduction to what Now & Then is about.

Now & Then is the first book in the new Parker City Mysteries series from Level Best Books. It’s a time-shift police procedural set in a highly fictionalized version of my own hometown.

It all begins in the spring of 1981, when a series of murders rocks Parker City. They’re unthinkable crimes the likes of which are unheard of in the close-knit community. Under great pressure from the powers-that-be, it’s made clear to newly minted Parker City Police Detectives Ben Winters and Tommy Mason that their first case could very well be their last if they can’t catch the killer.

Decades later, after distinguished careers in law enforcement, Ben and Tommy find themselves on the eve of retirement. But in their final days on the job, their very first case comes back to haunt them in a heart-wrenching twist, leaving everyone to wonder – did they get it wrong all those years ago? Was the killer actually on the loose for decades? The investigation then unfolds simultaneously in the ‘80s and the present as Ben and Tommy try to catch the Spring Strangler.

There are lots of time-shift mysteries out there and I love seeing how events in the past impact the present. But I was thinking one day that I couldn’t think of any time-shift mysteries that have the same detectives investigating the same case, just decades apart. Granted, you would hope the case would have been solved the first time, but what if the killer somehow came back? You have a chance to see how the original detectives on the case changed over time. To see what happened to them between then and now and how they “grew up.” From that, the story in Now & Then came along.

Tell us more about Ben and Tommy. What makes them so special?

Ben Winters and Tommy Mason are a classic detective duo. They grew up together, went to school together, and joined the police force together. They’re as close as brothers. Which makes them a dynamic team. Even though they’re both driven to get results, they achieve them in different ways using different styles. Ben is much more straight-laced and tech savvy, while Tommy is a little more wisecracking and free-wheeling. But their differences are what makes them work so well together. And even when the situation is tense or things seem to be falling apart, like in real life, they rely on humor to break the tension. Because they are such good friends and have known each other so long, they can also bicker like an old married couple. All of that makes them so fun to write.

You are a theatre producer. How has this influenced your writing?

It’s actually because of my work in theatre that I started writing mysteries. Back in 2005, I wrote an interactive murder mystery for my theatre’s season. It was one of the mysteries where the audience gets involved and helps solve the case. Well, it was a huge hit. Two years later, I wrote another. The interactive mysteries became so popular at the theatre, I started producing them as special events outside of the theatre. That was over fifteen years and fifty mysteries ago. A few years ago, some of the performers in the mysteries thought I should try writing a full novel. So I did. And Parker City Mysteries was born. Now, you could say my writing is done through a theatrical lens. I always try to envision the scene I’m writing on the stage or screen and how it would look to the audience.

I never really thought about it before, but I think I would have to say it was coming up with a beginning, middle, and end. Up until Now & Then, all of the mysteries I had written were more like very detailed outlines to be performed. And since they were interactive mysteries, the ending always depended on the audience. Now & Then was the first time I had complete control over what happened. Which also meant every detail really needed to be fleshed out so that the whole story, the characters, the locations, everything felt as real as possible. On the flip side though, I finally had the chance to really develop characters and a full story for the first time.

Readers say this was a quick read and hard to put down. How did you manage to keep it fast-paced throughout?

This goes back to my theatre background. As I was writing, I always thought of the end of each chapter as needing that cliffhanger moment right before a “blackout” or “commercial break.” The kind of thing that made the reader have to keep reading to find out what happens next. I also like writing short chapters. It gives the reader a chance to say, “Oh, I’ll just read one more chapter. Okay, just one more chapter. Alright, one more.” Then before they know it, they’re halfway through the book. I will say, I was told I was responsible for a lot of sunburns this past summer because people who took Now & Then to the beach and kept saying, “I’ll go in after the next chapter,” ended up staying out in the sun a lot longer than they had planned.

Why murder mystery? What drew you to the genre?

I love mysteries! Give me a good whodunnit any day. The more witty and clever, the better. I’ve always enjoyed them, so it was just natural that if I was going to write a book, it would be a mystery. Even though I spend a lot of my time thinking about murder and coming up with interesting ways to kill someone, I still use mysteries to unwind at the end of the day -- whether it be watching a funny mystery like the 1985 movie of Clue (a stage adaptation of which I also directed) or something a little more traditional like Midsomer Murders, or reading a classic Agatha Christie.

Did you plan out all the twists and turns, or did some of it just "happen" along the way while you were writing?

The overall idea for the story and main plot points were pretty well laid out in my head, but it was how each piece would connect to the next that was sometimes a surprise. Just like in real life, when you’re writing, there are different paths you can take and I had to put myself into the mindset of the particular character to figure out which way they were going to go and what they would do. Even though I was the one writing the story, it was interesting for me to see how things were happening. At times, there were entirely new characters that would pop up that I had never planned for. Some of them I liked so much, I’ve even carried them through to the next book.

Possibly the most interesting thing about the way I write is how I “outline” my books. Instead of just writing down all of my ideas in a traditional outline, I actually create murder boards like you see on television. I lay the entire case that is the focus of the book out visually with photographs and notecards and different colored lines crisscrossing the board. If you walk into my library right now, there are three murder boards sitting in front of my desk. Luckily, people who’ve seen them think they’re interesting and not creepy. But doing it this way lets me actually see the case as Ben and Tommy do. Granted, I already know who the killer is.

At the moment, I’m in the process of editing Vice & Virtue, the follow-up to Now & Then, which is slated to be released at the beginning of 2022. I’m also working on the first draft of Fact & Fiction, the third installment of the series. And like any writer, I have a hundred different ideas floating around in the back of my head as to what comes next. I just recently had lunch with my publisher and we talked about extending Parker City Mysteries past the original three-book series and an entirely new idea I have for a more lighthearted, comedic mystery series. Even when I’m not writing about mysteries, they play a big part in my everyday life. Just recently, I signed on to direct a new staging of Agatha Christie’s Murder on the Orient Express next fall, so I’m going back to reread the original novel so I can start working on that as well.

The best place to find out about Parker City Mysteries and everything I’m working on is on my website www.JustinKiska.com. I’m a fanatic about keeping my website up-to-date. Readers can also follow me on Facebook @JMKiska and on Twitter @justinkiska. They can also find me on GoodReads and BookBub. I love hearing from people!