Justin Warren - A Missing Person Case and a Coded Message

Justin Warren - A Missing Person Case and a Coded Message
Posted on 10th of March, 2021 by Naomi Bolton 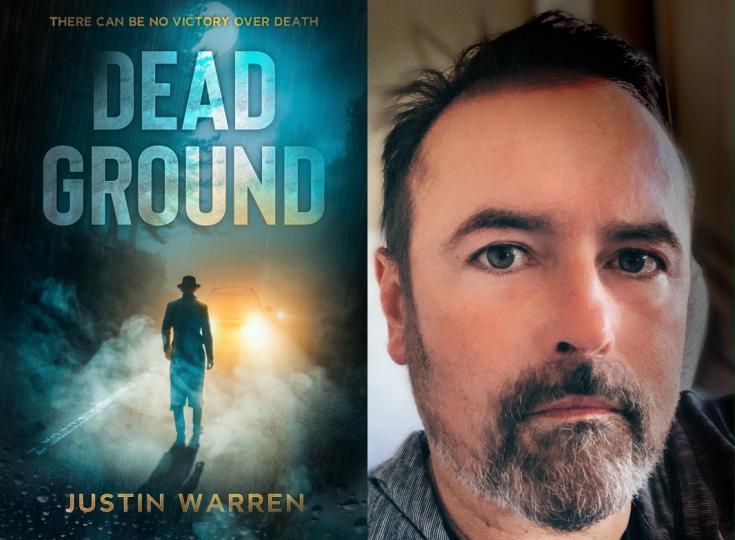 Justin Warren was born in Westport New Zealand. His father was a journalist and his mother was a dental nurse. During the early 1990’s Justin worked as a journalist where his primary role was general reporting. It was during this time he developed his love of writing. In 1998 he graduated from The University of Canterbury with a double major in management and marketing and in 1999 he gained a Diploma of Teaching from Christchurch Teachers College. Justin is currently Head of Commerce at Papanui High School in Christchurch. In 2016 he returned to his first passion, penning his debut crime novel, DEAD GROUND which was self-published in 2017 and longlisted for the Ngaio Marsh Crime Awards in 2018. As our Author of the Day, he tells us all about Dead Ground.

Please give us a short introduction to what Dead Ground is about.

DEAD GROUND is a crime thriller set on the West Coast of New Zealand. Christchurch-based Detective Dylan Harper is sent back to his old hometown of Westport to investigate the disappearance of a newspaper journalist. However, he quickly realizes some of the locals still hold a grudge after an incident several years earlier where Harper shot and killed a gang member. As he tries to solve the missing person case, he senses someone is stalking his every move and he has to keep looking over his shoulder as the case takes a deadly turn.

What inspired you to write about a missing person case and a coded message?

I always wanted to write a book set in my old hometown of Westport. When my parents sold their house and were about to move to Christchurch, I made one last trip back home to visit them before they left. As I was driving through the Buller Gorge just outside Westport, I noticed a very unusual road sign. Without giving too much away, the road sign hinted at a long-forgotten piece of West Coast history and it gave me the idea for DEAD GROUND.

In which way has your early work as a journalist influenced your writing?

When I was little, my father would sit me on his knee and we would read the newspaper together. That was the way I learnt how to read. I could read before I even started at school. So I sort of naturally developed that journalistic style of writing from there. Later, I ended up working as a journalist during my summer holidays. My favorite assignment was writing movie reviews. I got a free ticket to the theatre and I could go and see whatever I wanted. My first ever review was for the movie POINT BREAK starring Keanu Reeves and Patrick Swayze. It's still one of my favorite movies. However, I never liked the harder aspects of journalism, asking those tough questions that you know are going to cause a stir. So I never saw myself as taking it up as a career and I sought other avenues for my writing. I loved reading crime novels and I thought crime writing could be a good outlet for my ideas. Journalism also taught me that less is more and to use just enough words to get your point across.

This is book 1 of a series. Can it be read as a standalone? How do the other books tie in with this one?

DEAD GROUND neatly ties up the case of the missing journalist so it can be read as a stand-alone. However, there is one aspect of the case that remains unresolved and this flows through into the next book, THE LEWIS PASS.

I love the odd spot of golf. I play to a fairly low handicap, although I don't get out nearly as much as I would like to.

This was your debut novel... what has the experience been like so far?

My first novel was the easiest one to write. I would send the kids off to bed and sit down and write until ten, eleven, twelve at night. Sometimes longer if I was on a roll. Because it was my first book, I was just having fun establishing my voice and pacing and developing the characters. The second and third books have been harder because now I have to spend time marketing and promoting and worrying about my author platform and all that can take the focus off the thing you like doing most which is writing.

Who is Dylan Harper and what makes him so special?

Dylan Harper is an interesting character. His mother was a single mum bringing up a young boy when she fell into a life of drug addiction. When Dylan was seven, his mother died of a drug overdose and this shattered his world and sent him off the rails for several years. He was all set for a life of crime when one night a gang member came to his house with a gun. Harper's girlfriend was shot and killed but Harper managed to wrestle the gun-free and he subdued the intruder. He could have called the police but in a fit of rage, he shot and killed the gang member. From that moment on he decided to go straight and became a police officer and fight for the victims of crime. However, he has a nagging fear that someone will find out what he did all those years ago. He is always afraid that someone will find out he is a fraud.

Why did you title this "Dead Ground"?

The title of DEAD GROUND has to do with where the novel is set. The West Coast is one of the most stunning parts of New Zealand, with lush rainforest and soaring mountains and an abundance of natural beauty. But for Dylan Harper, there is nothing beautiful about it. For him, the West Coast represents death and darkness and lost dreams and the ground that he walks on is a reminder of that. He can see through the picture-postcard views to the seedy underbelly of drug and alcohol addiction and crime that lies just beneath the surface.

Are you a plotter or a pantser? Do you plan out all the twists and turns in your story beforehand, or does some of it just "happen" along the way?

I'm definitely a plotter. I like to sketch an outline of each day of the case so I know where I'm heading and what happens next. I think this is especially important in crime fiction. If you want to get to point Z by the end, you need to do A and B and C to get there. Having an outline reminds me to tick off those key events. However, I usually deviate a little from this outline. I often come up with plot twists as I'm writing and this can sometimes take things in a new direction. But I absolutely need that skeleton outline to base things around.

I usually write to music. I'll put my headphones on and turn up the volume and write for as long as I can. I have a carefully curated playlist that I use to get in the mood. At the moment I've rediscovered The Violent Femmes and 10,000 Maniacs, as well as a bit of Primus, so I've added them into the rotation with my usual mix of 90's alternative and a bit of grunge. Music also helps block out the distraction of living in a busy house with a young family. I also like to start each writing session with a cup of coffee. I typically write at night once everyone has gone to bed as this is the quietest time in our house and I find I can get more work done that way.

I'm currently working on my third novel, tentatively titled THE NIGHT BELONGS TO HER. It's another Dylan Harper book and it follows on from DEAD GROUND and THE LEWIS PASS, which are already out.