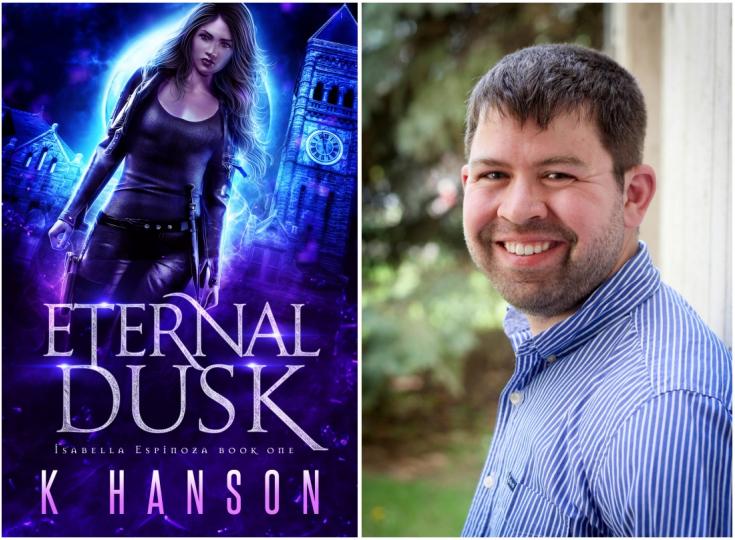 K Hanson is the author of the Isabella Espinoza urban fantasy series, the Storm Raven pirate fantasy series, along with the Kayla Falk thriller series. K Hanson lives in Sioux Falls, South Dakota, where he works as a software developer. In his spare time, when he isn't writing, he enjoys reading, working out, playing video games, and spending time with his wonderful wife, Bobbi.  As our Author of the Day, he tells us all about his book, Eternal Dusk.

Please give us a short introduction to what Eternal Dusk is about.

Eternal Dusk is set in a world where portals from another dimension have opened, spreading darkness and monsters. Isabella Espinoza is a former detective who was bitten by one of these monsters, known as a night stalker, and used an experimental antidote made by her best friend to protect herself from the creature's venom. It did indeed protect her, but it also gave her superhuman abilities. In Eternal Dusk, a mysterious corporation is threatening her friend to make him do dangerous research. Isabella sets out to investigate them, but they'll do anything to stop her.

Initially, the idea came from doing a short story for a local writing group. I liked the idea of setting a dark fantasy story in my own hometown, so I wrote a short story about Isabella's backstory. I really enjoyed that and loved how Isabella came out, so I decided to turn it into a full series!

Tell us more about Isabella Espinoza. What makes her so special?

Isabella grew up in Sioux Falls, SD, as the daughter of immigrants, and has always had to be one of the tough ones. She was a detective around the time portals opened and spread darkness, and she stuck around to try to help people as things grew more dangerous. Eventually, one of her missions took her into the heart of the dark void, where she was bitten by a monster and had to use an experimental antidote to save herself. This led to her getting some special abilities like enhanced senses, reflexes, strength, and speed. It also turned her eyes red, which some people find unsettling. At the start of Eternal Dusk, she's still getting a feel for these abilities and figuring out what she wants to do next.

A couple of big inspirations for Isabella are Rosa Diaz from Brooklyn Nine Nine and Jessica Jones.

Why urban fantasy? What drew you to the genre?

As an author, I find myself drawn to several different genres. I've written a couple of thrillers and the last book in my young adult pirate fantasy series is at the editor. I was drawn to urban fantasy by reading work from authors like Jim Butcher and Laurell K Hamiltion, and because it seems like a good place to try writing a more mature fantasy story, using real world locations from my hometown.

I'm not so sure about secret skills, haha, but for my day job, I am a software developer, which I find as a good balance to writing. It gives me a chance to engage different parts of my brain in a satisfying way.

The cover was created by Rebecca Frank, and I wanted something that captures both the character of Isabella and the location of Sioux Falls. By looking at it, you can get a sense of how Isabella carries herself and, if you look closely, you can spot her red eyes. The background itself is actually the old courthouse here in Sioux Falls, which I thought was pretty cool for Rebecca to use. Overall, I'm really excited by how the cover turned out. I think it does a great job of showing the mood of the book.

For me, I generally stick pretty close to what I have outlined for a book. Within a given scene, sometimes a line or a bit of action may come naturally as I write, but it's not usually anything major that really changes the course of the book.

Hmm, honestly, it's hard to settle on just one favorite line! Isabella has quite a few good one-liners, both out loud and in her inner voice, so it's hard to choose a favorite.

Honestly, the biggest thing that I didn't expect is how many awesome people I'd meet as I got into writing. It has led me to a local writing group, South Dakota Writes, where I've made a lot of good friends and where we've done some writing critique groups and other events. My writing journey has also taken me to some wonderful places for book fairs. My wife and I have made a couple of road trips to Michigan for writing events, and that has been incredibly fun.

I can't think of any real problems that I've encountered. One challenge is making sure that my world building remains consistent within a book and series. To help with that, I keep notes as I go and re-read my work so that everything lines up the way that I want it to. In Eternal Dusk in particular, it's been fun to write about a messed up version of my own city, so I use actual places that I'm familiar with, just with the names of businesses changed.

Eternal Dusk can probably be read as a standalone, however, it does end on a bit of a hook that connects to the next book so a reader might feel the urge to keep reading the next book. There are three planned books in this series, with the next two set chronologically after Eternal Dusk. The second book is Eternal Void and the third is Eternal Moon. Both of those are available for pre-order and will launch this fall, so readers won't be kept waiting!

One writing habit I have is that I like to write in sprints. I'll set aside any distractions and write for 5, 10, 20 minutes at a time, trying to get as many words down as I can without going back to edit or fix anything. I find that this helps me get a lot of writing done quickly, and it also helps me focus and get in the flow. Later, I'll come back and edit it.

It's hard to say that I have an average writing day, as that depends on what's going on in my day job and non-writing life, but on any given day, I like to start with a warm-up sprint, then do a few more until I hit my writing goal for the day. After that, I'll go back and do some editing on work from a few days before. I generally don't like to edit something right after I write it, as I like to get a little distance first.

Another thing that I like to do in a non-Covid world is to write at a coffee shop on the weekend as a change of scenery. For now, though, moving from one cushion on the couch to another is working well enough.

Right now, I'm working on wrapping up the last parts of this series, and I've also just started drafting my next series. However, it's too soon for me to really talk about what that will be, but if you follow me, you'll find out once it's ready for the world. :)

Readers can find me a few places. I'll go ahead and list those out for you: 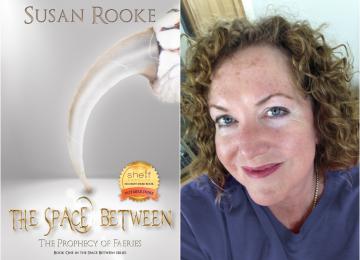