K. Leigh - A Sci-Fi Trilogy Jam-Packed with Action and Adventure

K. Leigh - A Sci-Fi Trilogy Jam-Packed with Action and Adventure
Posted on 21st of July, 2021 by Naomi Bolton 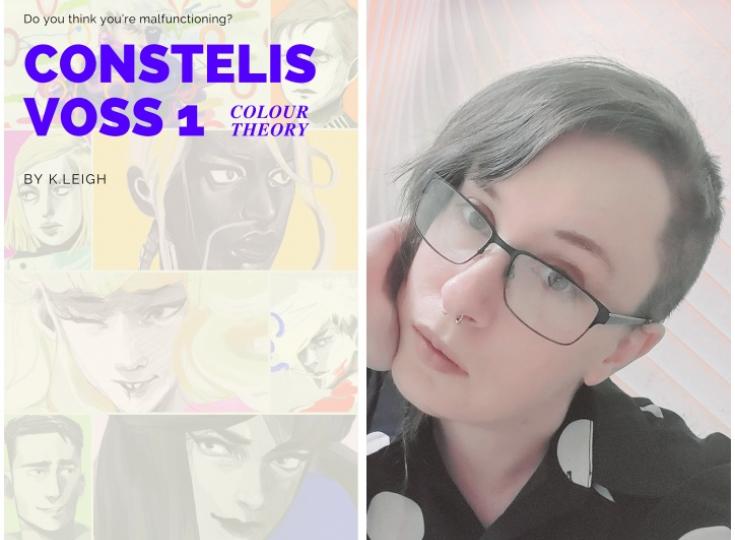 K. Leigh is a 33-year-old once-painter, sometimes-freelancer, forever-artist living in Providence, RI. They write hopeful-tragic stories full of funny, horrible characters, in various genres. As our Author of the Day, they tell us all about their Constelis Voss trilogy.

Please give us a short introduction to what the Constelis Voss trilogy is about.

On an absurdist planet-sized ship known as CONSTELIS VOSS, an advanced android finds himself stuck with a personality file from the 90s, grapples with his past life, and discovers curiously familiar friends who he conscripts to fight against an unjust system. That's the basic premise; Alex and his past-life buddies teaming up to topple tyranny in the super-future. But it's also so much more than that.

Symbolism is the name of the game and CONSTELIS VOSS was written to be dissected by savvy readers. 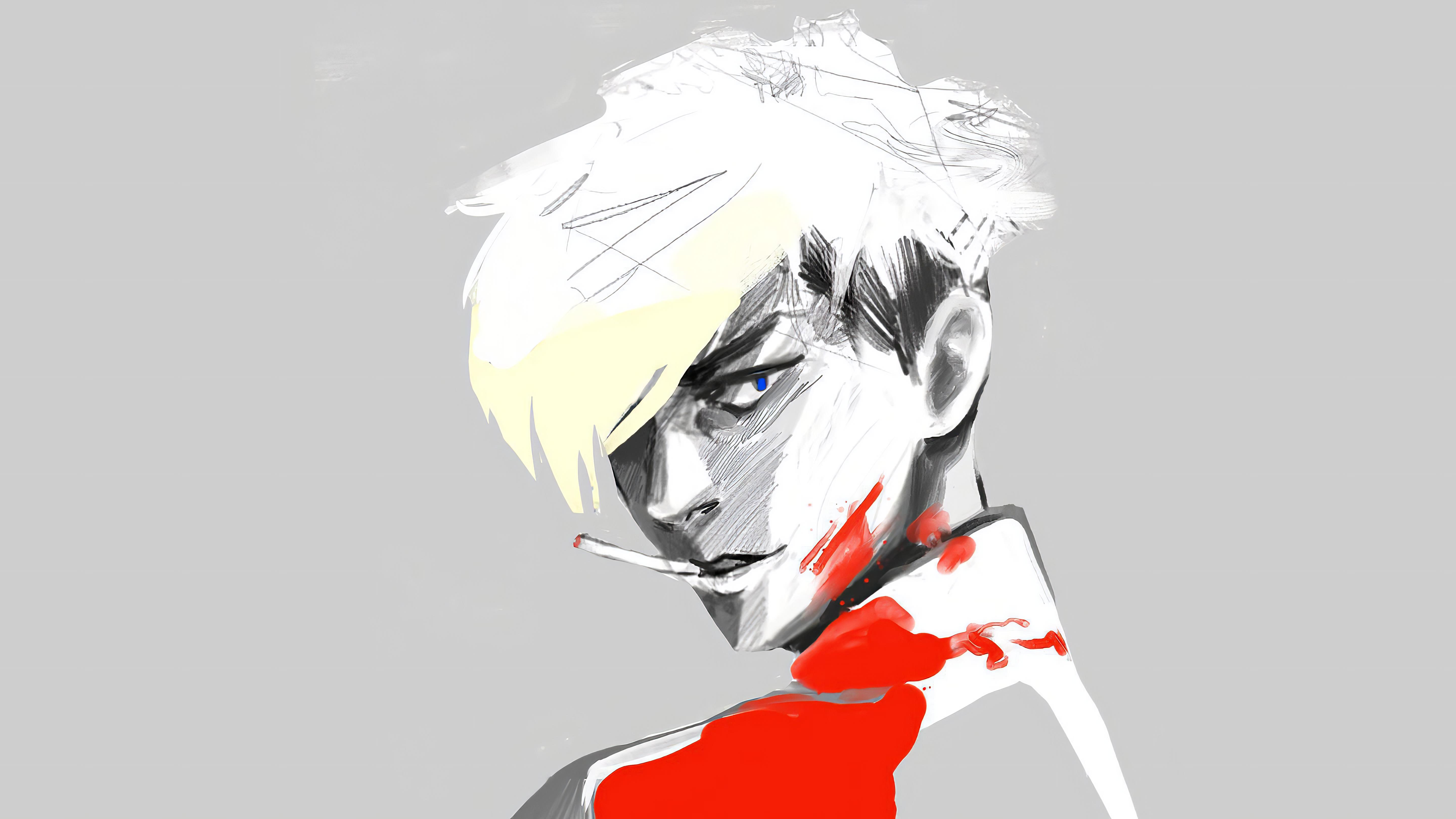 There are many reasons why I wrote this story. On the selfish side, Alex's story is symbolically and emotionally my own. From a dark period, Alex's journey as a morally gray mess of a robot-man was born. As I spent time evicting emotional demons, I discovered that all I'd really done was write an untouchable anti-hero that I borderline forced an entire constructed universe to empathize with.

I knew this wasn't right—even if venting through art is positive, we can't force understanding if we fail to give it.

For that reason, I made CONSTELIS VOSS a story about intersectional pain and coming together to tackle problems that impact us all. I was also inspired to investigate my own biases, which led me to interweave these issues into the story. What was born from this was a self-aware trilogy made to tackle the politics of power, question tropes, subvert expectations, and garner understanding for the very different struggles of many types of characters.

In unjust systems, we all suffer.

On the media side, we're looking at anime titles like Ghost in the Shell, serial experiments: lain, FLCL, AKIRA, and books like Do Androids Dream of Electric Sheep and Crime & Punishment. Other inspirations can be cited, such as films like Dark City, and television shows like Mr. Robot.

Drawing from my favorite media, I think I ended up with something truly unique. Readers may find that it's a slightly disjointed space romp featuring robots fighting for their lives, but if you shift perspectives, it becomes something new each time you read. 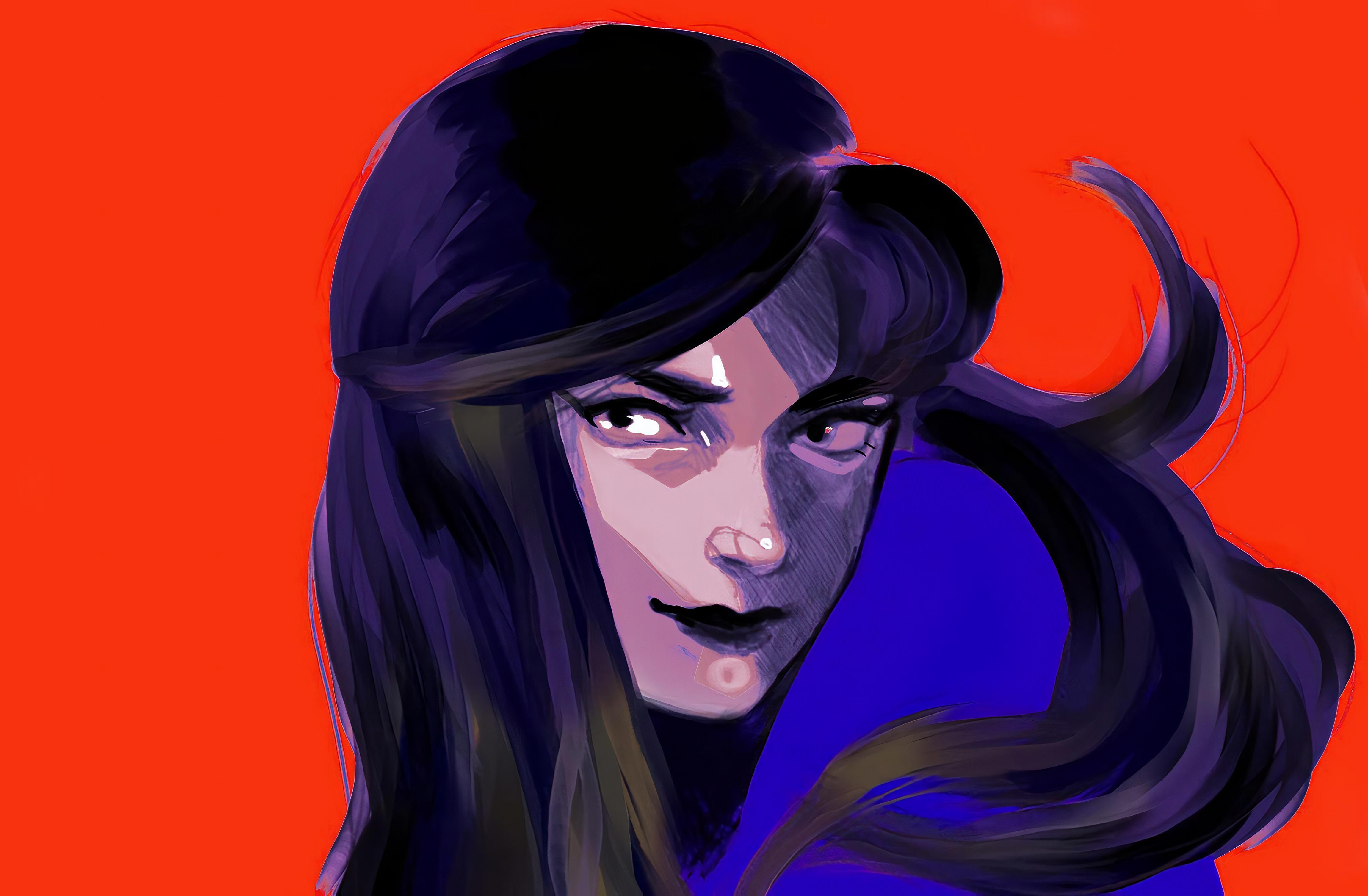 Why did you pick a dystopic planet-sized ship as the backdrop for your story?

To be frank, I think we already live in a "boring dystopia", and in the distant future—if we don't tackle our challenges now—I imagine an absurdist, dystopic, planet-sized ship lorded over by megalomaniacs isn't that far of a stretch.

CONSTELIS VOSS is merely where we're at, but with robots and laser pistols. If you scrub all the sci-fi, it doesn't look that different from contemporary challenges, just notched up to make it clearer. I'd have labeled it hyper-realism if I thought readers would get the art-style joke. 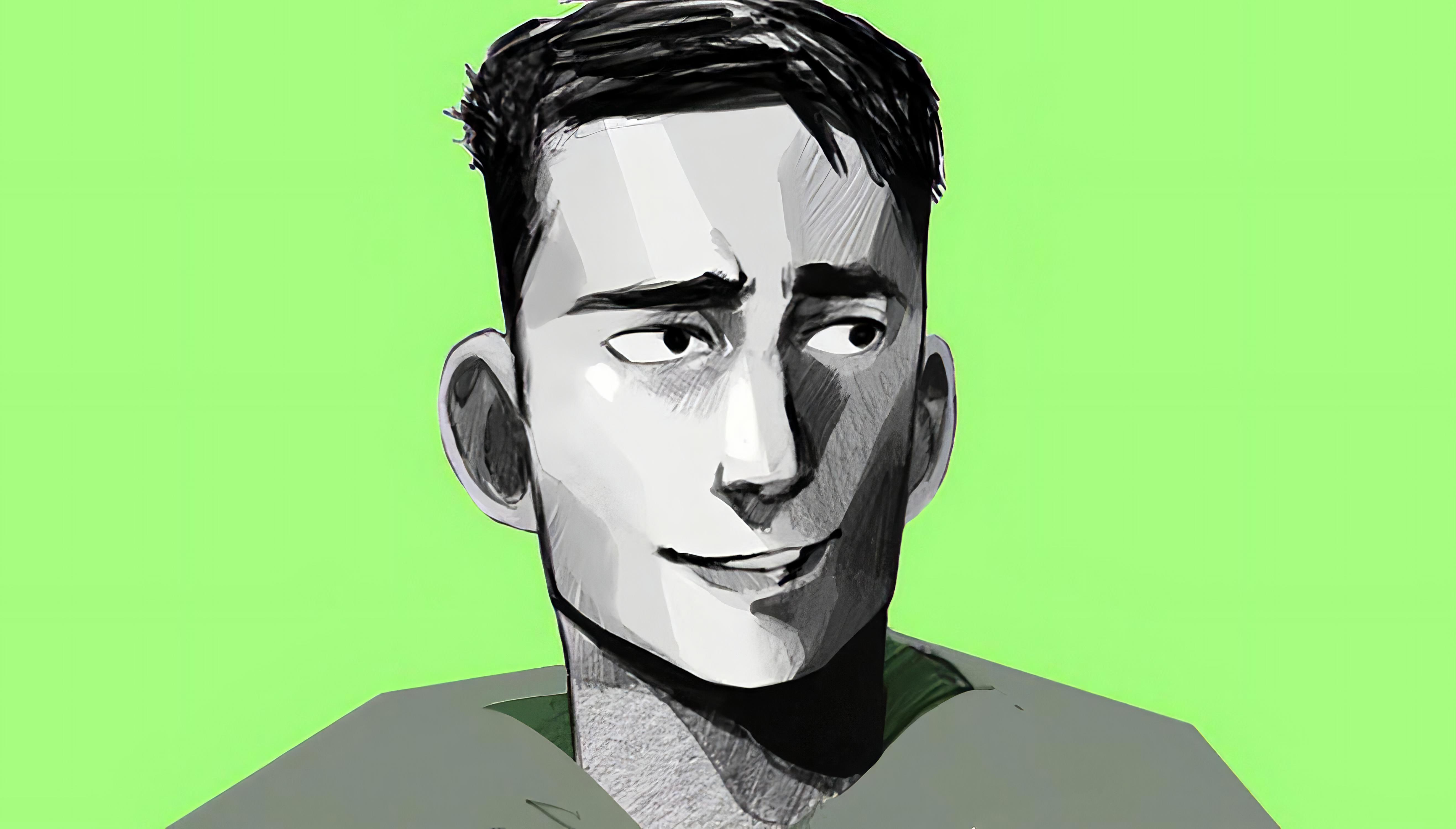 Tell us more about Alex. What makes the cast so special?

They're special because they're very human. While every character is given a fantastical power at some point, they're all flawed, relatable characters with their own hopes and dreams. Each character has to grapple with what they were "written to be" versus who they truly are—that's very human, even if they aren't.

As far as what makes Alex special, he's special because he's a necessary hero, but not a role model. I wanted to write a messy queer character that people could relate to. A character that's allowed to fail spectacularly but still be understood and loved. I don't see that enough in life or in literature.

Each character is like this. Polly is the blonde, "air-headed mean girl" who struggles with impossible depression due to a stifled life. Maya is the "manic pixie dream girl" who's infantilized far too much, as she's a genius. Henry is the "himbo" who struggles with communication and is branded simple for it, when he isn't. Sebastian is labeled as a "would-be tyrant" when he's at most ignorant, yet has good intentions. Vox is labeled a "doormat" when that's the polar opposite of who she is. Diana is the "femme fatale" yet has oceans of empathy.

CONSTELIS VOSS is a story about perspectives and perceptions. Every character is important and very different.

I'm an amateur 3D animator, was a pop-surrealist illustrator/painter in a past life, I develop/code websites, design graphics, and dabble in music-making in my off-time. Any form of art, I've probably touched it, and where art meets technology, I'm definitely showing up.

Why do you write Sci-Fi? What drew you to the genre?

Science fiction is my favorite genre because it's so limitless. It's full of possibilities without requiring writers to concoct systems. For example, I based every piece of absurdist technological framing in CONSTELIS VOSS on something real. To the point where—in volume 3—I refer to the git workflow of pushing production code to live servers.

I love writing science fiction because it's allowed to be fantastical with very little oversight. I also might just be way too obsessed with Farscape and Star Trek: Deep Space Nine, to be plain. 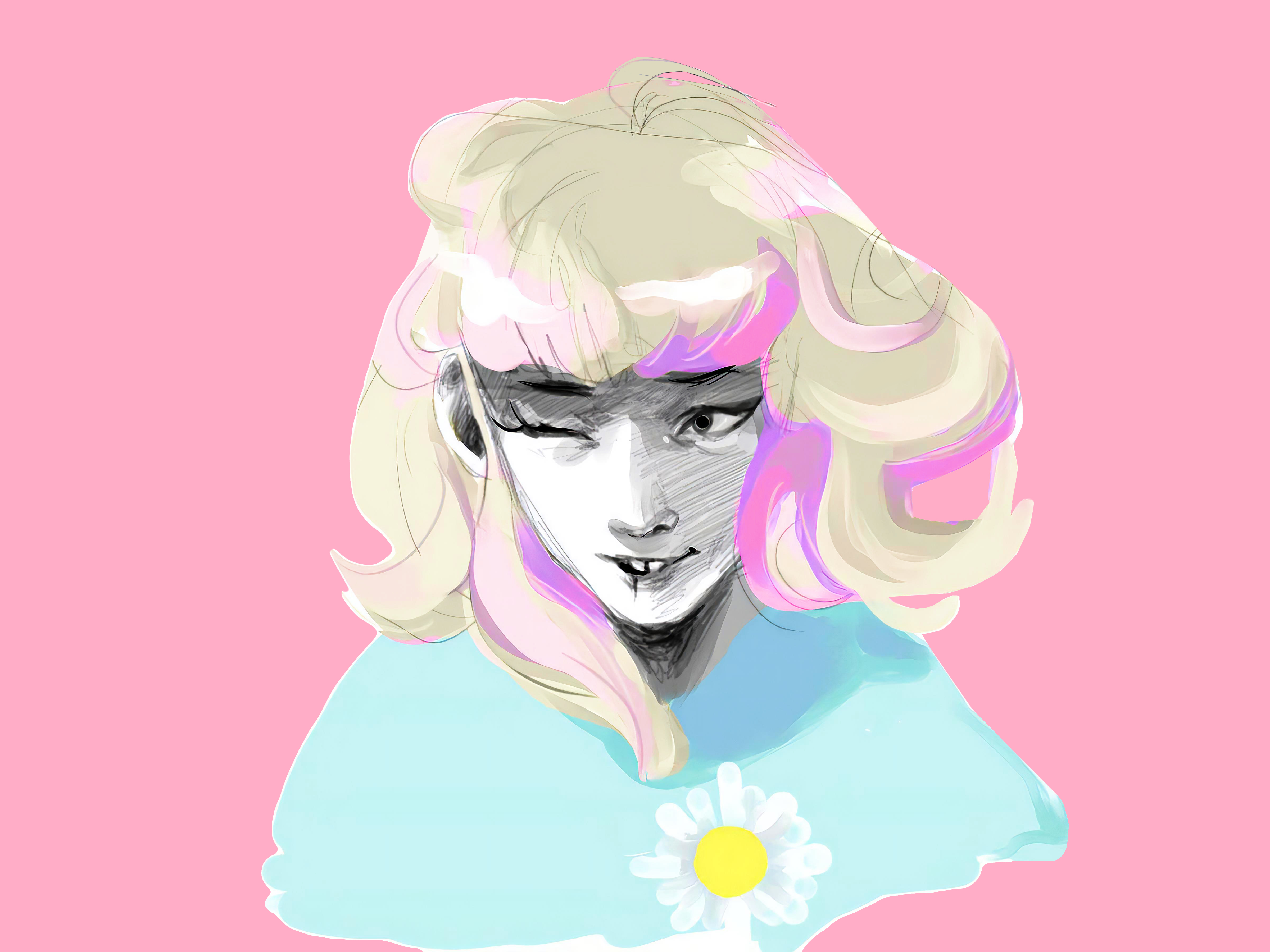 In which way, would you say, is CONSTELIS VOSS different from other books in the genre?

For starters, it's just written differently. It finds its contemporaries back in the Russian lit boom, while also not being so stuffed full of purple prose it stumbles with bloat. It was written to be easy to read, especially for neuroatypical people, like myself.

To get a bit deeper, it's also queer as the day is long, and does not solely exist as a "from point A to point B" narrative.

Many science fiction stories grapple with big topics—another reason why it's my favorite genre—but my contemporaries are often more literal, while I'm a fan of psychological-surrealism.

Alex was both the easiest and most challenging character to create. He has a lot of emotional baggage curled up, under, around, and through his character, which can be taxing. He was the easiest to create because he serves as a great emotional funnel. I've also had him under my belt for 15 years at this point. 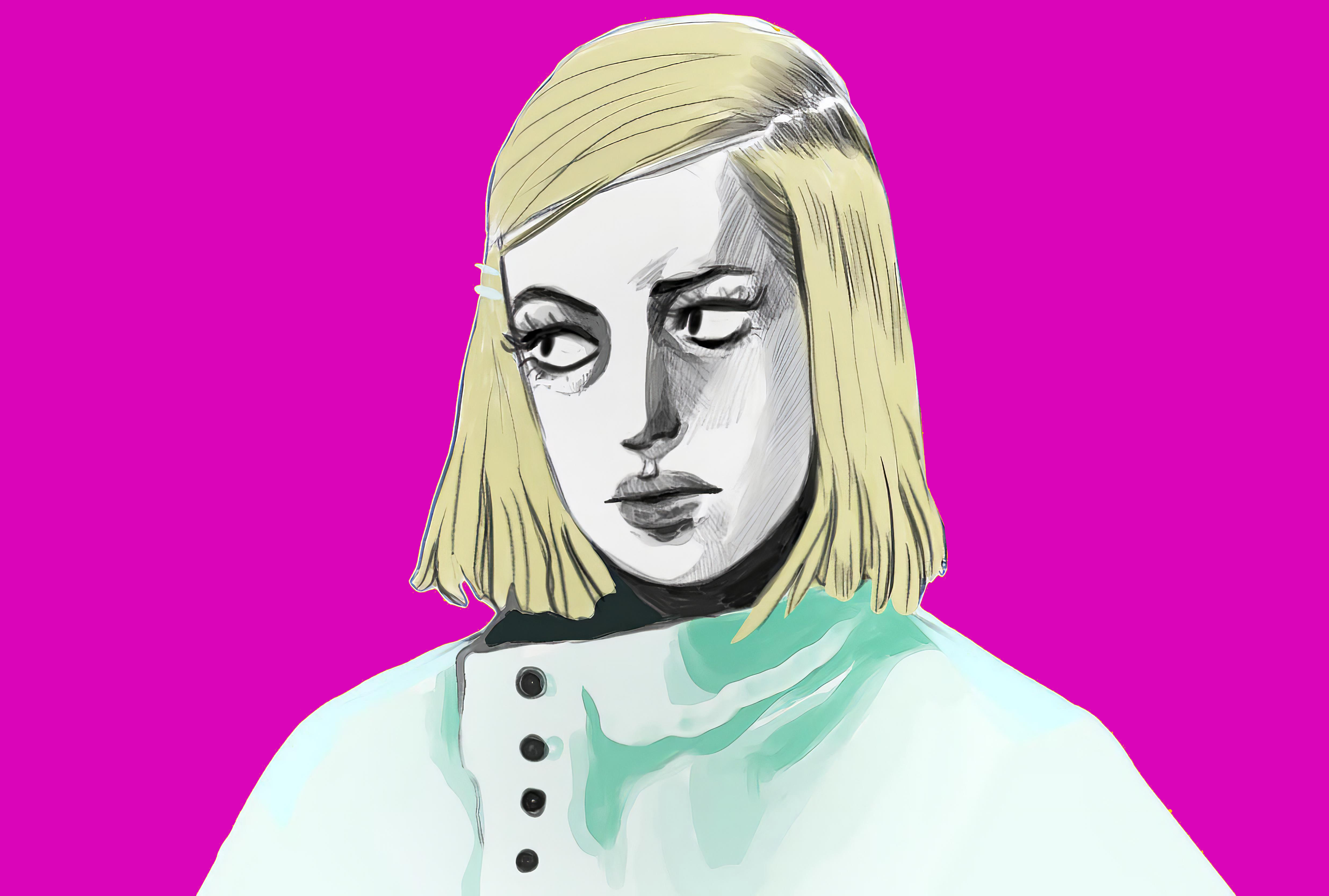 Why did you pick the 1990s as the time frame for Alex's memories?

Alex's memories—his past life—live as a direct nod to film-culture at the time. I'm a 90s kid and watching sci-fi anime on Sundays on the SyFy channel was where I formed my appreciation for art. Star Trek: Deep Space Nine also came out in the 90s, as did The Fifth Element, and so many other titles I'm deeply drawn to.

CONSTELIS VOSS may be conceptually fueled by big, real-world topics, and written like Dostoeyvsky's weird otaku cousin, but the aesthetics of it all come from 90s media.

For a reveal of an in-text nod, the original animated Ghost in the Shell movie came out in 1995, and it's directly referenced in the plot of CONSTELIS VOSS itself, in volume one.

I very much wanted his memories to live in a certain flavor of media, because that's what I miss seeing and reading.

Did you plan out your story before you started writing, or did some of it just "happen" along the way?

I'm a pantser type of writer. I go in having one idea, but then the muses inform the plot along the way. Or, you change course, when you realize your ideas need to change.

If you're a character-centric writer, you'll no doubt realize that pitch-perfect, fully outlined novels don't work in practice. You'll find that you had a plan for XYZ, and then you realize a character grew organically to not ever make the decision you need them to. Then, you write what they'd really do, and the novel takes a different shape.

It's cool to have an outline but without flexibility, you're liable to write characters that don't feel like real people. 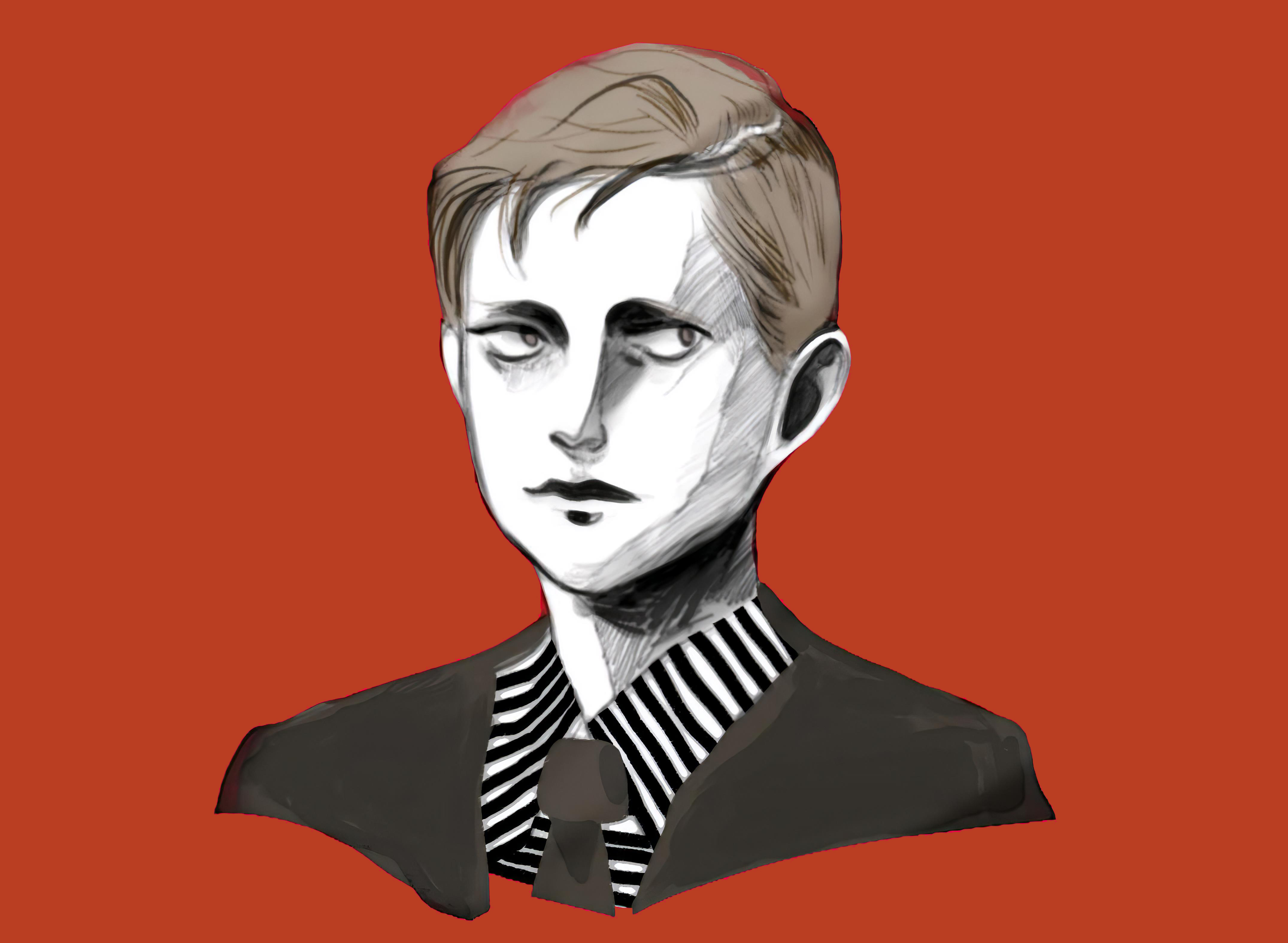 Colour Theory is Book 1 in the Constelis Voss trilogy. How do the other books in the series tie in with this one?

To make it simple, CONSTELIS VOSS has three distinct parts though the story continues without skipping a beat from each volume.

In part one of CONSTELIS VOSS—Colour Theory—I set up "intro to tropes 101", an introduction to the world, color symbology to keep in mind, the characters, and the challenges before them. I tease a greater mystery.

In part two, known as Pattern Recognition, the plot continues while consistently referencing repeated motifs, the characters grapple with memories of their past selves, are gifted fantastical powers, and the mystery unfolds.

In the third volume, called Reformat, all of that comes together. The mystery is revealed, the big concepts are clearly painted, and the cast is left to explore who they can become—not who they were forced to be.

They are all tied together as one singular work, split into parts for a specific conceptual purpose.

I tend to write to music. I have unofficial playlists (vol 1, vol 2, vol 3) for each volume that I suggest readers listen to if they want a multilayered experience; though I know this is a challenge for some. I'm very musically oriented, as I find music to be a character and a setting in and of itself.

An average writing day is huffing a lot of coffee, blasting Sisters of Mercy, and slapping keys until I have to force myself to step away. I can write thousands of words a day at any given time, but the challenge is always chasing the flow-state.

I'm working on a series of side-stories—more or less offshoots—of the mainline CONSTELIS VOSS trilogy. There are 7 in total for each of the characters, outlining their past-life 90s backstories in more depth. Readers don't have to read the mainline trilogy to understand them, nor do they need to read all of them.

They're told from their perspectives, first-person—which is a challenge for me—and will have crossovers. For example, in one novel there may be an event, and a character may have one perspective, while another feels differently about what happened.

I'm working on them one at a time, truly getting into the characters' heads to do their unique stories justice. 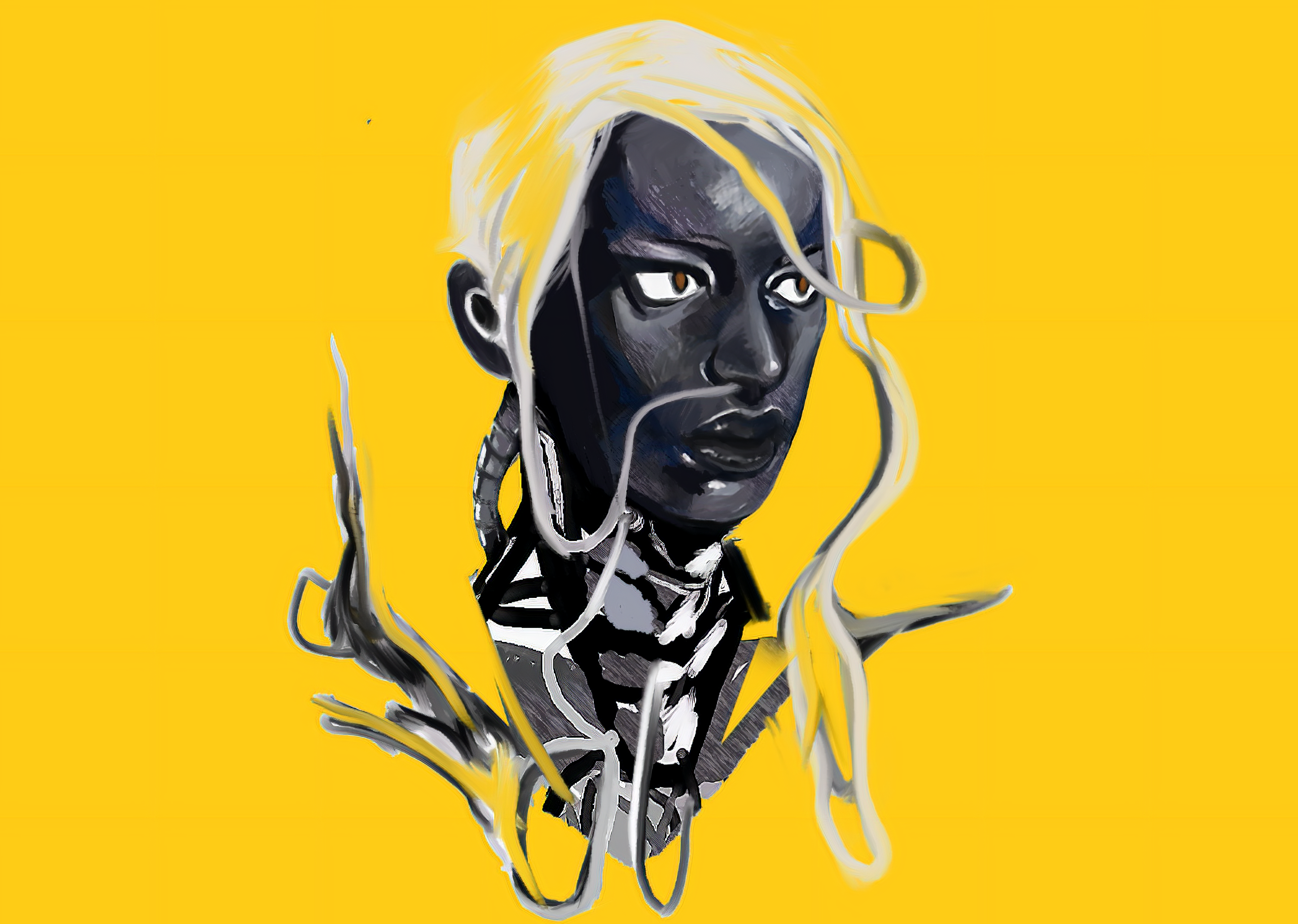 Readers can score volume 1 of CONSTELIS VOSS here on Amazon; it's free to read with Kindle Unlimited. CONSTELIS VOSS vol. 2 was also released recently and is available on Amazon. Volume 3 should be out sometime in late August/early September. Each of these come in eBook and Paperback formats.

To keep up to date, read character bios, and sign up for the mailing list, readers can visit www.constelisvoss.ml. In the newsletter, we send out freebies often and give shout-outs to other authors~

I hope people enjoy the series, find a bit of themselves in my words, and maybe even get inspired to write their own stories too. Art is all around us, it takes many shapes, and if you dream it...you can make it.

I encourage readers to reach out to me on social media, even if they just want to chat. I'm always happy to talk about art/life/writing and swap memes