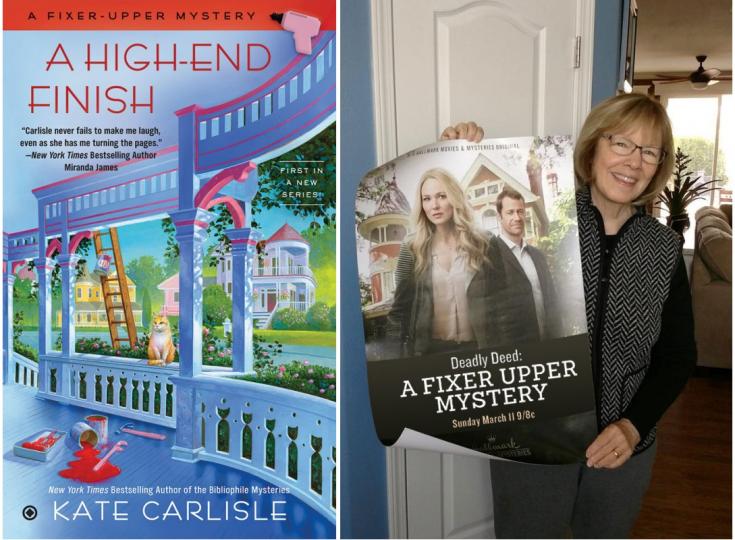 New York Times bestselling author Kate Carlisle is a native Californian who worked in television production for many years before turning to writing. With the publication of A High-End Finish in November 2014, Kate launched the Fixer-Upper Mysteries featuring building contractor Shannon Hammer, who specializes in Victorian home renovation and repair. The series is set in Lighthouse Cove, a seemingly idyllic town with many dark secrets hiding under its floorboards. Hallmark Movies & Mysteries Channel is bringing the Fixer-Upper Mysteries to TV in a series of movies starring Jewel and Colin Ferguson. The first movie premiered in January 2017, the second less than three months later, with plans to film several more.

Please give us a short introduction to what A High-End Finish is about.

A HIGH-END FINISH is the first book of my Fixer-Upper Mysteries series, which your readers may recognize from Hallmark Movies & Mysteries. Hallmark has brought my books to the screen in a series of movies starring Jewel and Colin Ferguson.

In Lighthouse Cove, everyone knows the best man for a job is a woman... contractor Shannon Hammer. Shannon specializes in Victorian home renovation, with an unfortunate propensity for finding literal skeletons in her neighbors’ closets.

As A HIGH-END FINISH begins, Shannon has an epically bad blind date, witnessed by half the town. So when her blind date turns up dead the next morning—on one of her job sites—she’s the new police chief’s prime suspect. Shannon and her close-knit group of friends will have to work together to clear her name and nail the killer.

Here I am with a Hallmark movie poster: 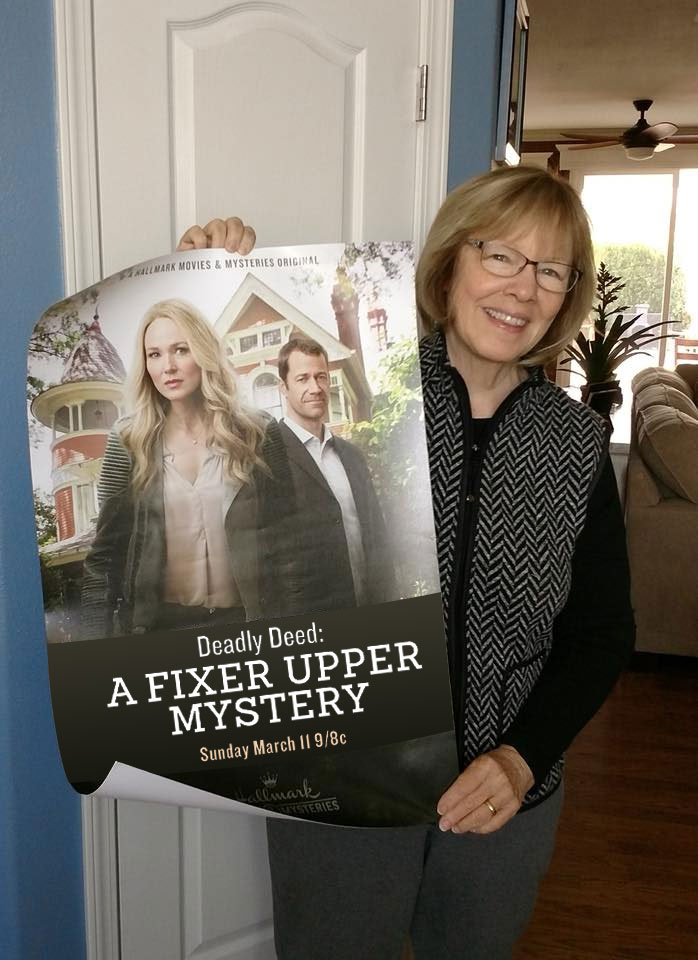 What inspired you to write about a woman whose recent date is found dead?

One of the things I love best about writing my first and best known mystery series, the Bibliophile Mysteries, is the slow-build romance, so I knew that I wanted Shannon to be single when the series started. I also needed the first murder victim to be connected to her in such a way that she would be a logical suspect. The blind date idea came to me pretty easily when I started brainstorming the book.

Why did you pick a northern Californian seaside town as the backdrop for your book?

I’m a California girl, born and bred, so it’s what I know best. The Bibliophile Mysteries are set in San Francisco and Sonoma, and with this series, I moved even farther north. Lighthouse Cove is built along the cliffs in northern California, a quaint resort town known for its Victorian architecture (inspired in part by Ferndale).

Your readers can find a full-page map of Lighthouse Cove in the Secret Room at KateCarlisle.com. The map shows the downtown area, where all the characters live, and where the murders have taken place. On the left in this picture, you’ll see my little hand-drawn map that I used while writing the first couple of books; on the right is the colored version that’s available for free on my website. 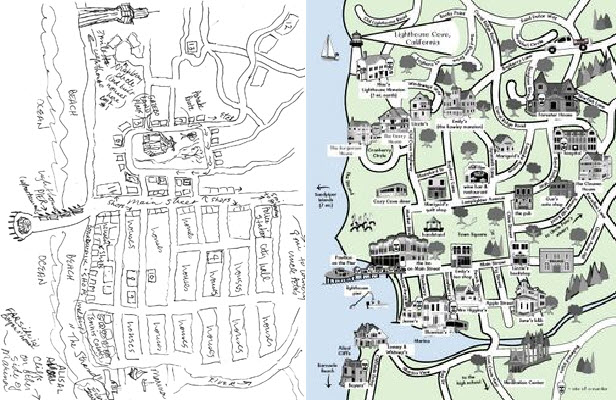 Tell us more about Shannon Hammer.  What makes her tick?

Shannon is the definition of feminine strength. She runs her own construction company and has a great relationship with the guys on her crew. She’s smart and observant, which are two essential traits for an amateur sleuth. She’s also very loyal and loving. She has a group of very close friends for whom she would do anything, and they for her. And when her rascal dad is suspected of murder (DECK THE HALLWAYS, 2016), Shannon puts it all on the line for him, too.

Why did you make Shannon a contractor?

My dad was a contractor, as is one of my brothers, so I’m very familiar with the world and have a great source to go to with technical questions.

You used to work in television for many years.  How has this influenced your writing?

I’ve had many different jobs over the years, and every one of them has provided fodder for my books. The most specific way in which my time in television production has influenced my writing is that it inspired one of my books—THE BOOK STOPS HERE, 2015. My bookbinder heroine, Brooklyn Wainwright, is a guest expert on an antiques appraisal show called This Old Attic, inspired by Antiques Roadshow. In that book, I was able to take readers behind the scenes of a TV show to show them an insider’s view of the workings.

But no one was ever murdered on one of the sets where I worked. . . as far as I know.

I’m very highly skilled at watching other people cook. And I’m an excellent appreciator of their efforts. (That said, I do have some easy recipes available in the Secret Room at KateCarlisle.com. So easy, even I can make them!) 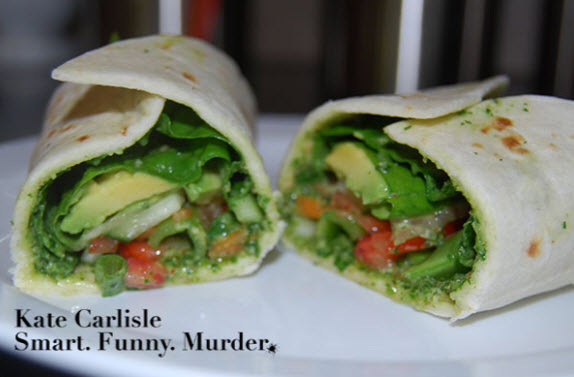 Since I was a child, I’ve been fascinated by bookbinding. No joke. I started taking book arts classes at my local library when I was a kid, and I have continued to dabble my whole life. I’m nowhere near the professional level, but I love it. That is, of course, what inspired the Bibliophile Mysteries, my series that centers on a bookbinder who solves murders that are linked to the rare books in her care. Your followers can learn more at www.BibliophileMystery.com.

Oh, that’s a good question! For a book I’ll read one time, I don’t have a strong preference. The story/content is what matters to me. But I have many print books that I treasure. When our new house was being built, bookshelves were a priority!

It took a long time and many rejection letters before I sold a book, and so I was a little afraid to believe at first that it would last. I’d say I started to feel more secure about the time that I sold my third book.

Not really, but certain traits are certainly inspired by people I’ve known in real life. When you’re writing mystery, it could be tricky to base a character on someone you know and love because sometimes you just have to kill them.

That’s the wonderful thing about writing an ongoing series—they live on in my imagination and on the page! Readers can catch up with their friends from book to book. It’s a joy to write both the Bibliophile Mysteries and the Fixer-Upper Mysteries for just that reason.

I’m working on next summer’s Bibliophile Mystery. No title yet. Brooklyn Wainwright will be restoring a very rare copy of Little Women by Louisa May Alcott. One of the fun things about writing the Bibliophile Mysteries is that the themes of the rare book at the center of the mystery are echoed in the modern-day murder. So fans of Little Women can look for little Easter eggs that connect back to their beloved story. It makes plotting the books a lot of fun for me, finding ways to weave in those touches back to the rare book.