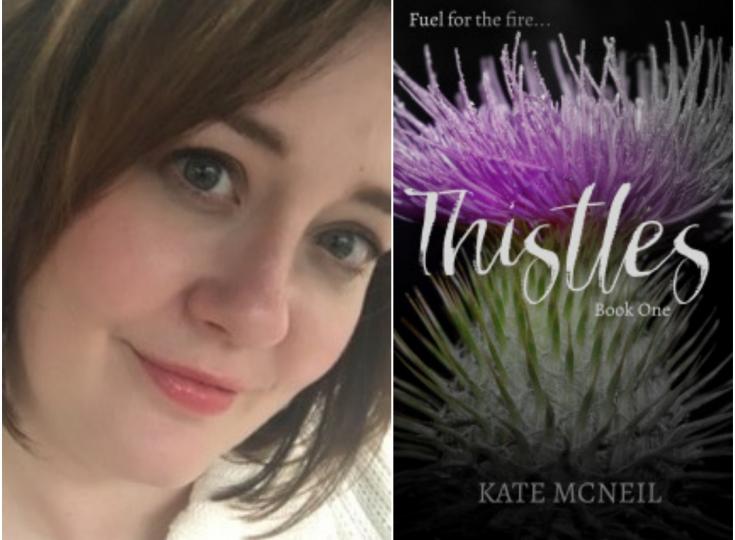 Kate McNeil is a writer, reader, photographer, and blogger, fueled by sushi and dreams. She is a Kentucky girl who currently lives in Metro Detroit with her husband. As our Author of the Day, she tells us all about her novella, Thistles.

Please give us a short introduction to what Thistles is about.

Thistles is the introductory novella to the Pistils series, which starts off with a female CIA officer, Vivian Carmichael, returning to the U.S. under less than ideal circumstances. It sets up the world that is explored through the rest of the books…why is she back? Why was she burned? Who and what did she leave behind? And what can she do now? How does friendship and family help her heal?

Tell us more about Vivian Carmichael. What makes her so special?

She’s an interesting combination of nature and nurture. Her childhood was absolutely horrible, yet she grew up to be a very morally-driven character, protective to a fault when it comes to her loved ones. Her best friend Parker (written by Britt Goodwin in Pistils) provides that counterbalance against Vivian potentially going off the deep end.

This is the first book in the Pistils series. Can it be read as a standalone? How do the other books in the series tie in with this one?

The books are meant to be read in this order: Thistles, Pistils, Sub Rosa, Nightshade, but they’re not necessarily chronological. Sub Rosa goes back in time to Vivian’s past as a CIA officer and could definitely be read as a standalone, but hopefully any of them would make you want to read the others!

Readers say that your characters are realistic and relatable - how do you pull this off? Are they based on people you know?

I tried to make the characters as realistic as possible…they aren’t like James Bond or John Wick…if they’re shot, stabbed, clobbered, or drugged, they’re going down. Plus I don’t think it’s as relatable for readers to have a main character who basically bounces back from everything like a superhero. I also did a lot of research to make sure everything was as correct as I could make it when it comes to CIA and MI6 officers (not agents, officers!). Those individuals stay alive by using their brains and wits, but that’s not to say it’s not extremely dangerous for them at the same time.

Hmm, I’d probably get along most with David, because he has an attitude of getting things done, and that the ends always justify the means, but only because he’s thought it through ahead of time. He thinks outside the box a lot, which I always try to do. Least? Can’t really say without giving away spoilers!

The opening line to Thistles is definitely up there… “Destroying someone’s life could be remarkably cathartic.” It sets the tone for a lot of things that happen throughout the series, and if a reader goes back and re-reads that line after finishing the series, they may realize that it could be almost any of of the characters having that thought. If you have to protect the ones you love, are there really any lines you won’t cross, any lives you won’t destroy if you think they deserve it?

Why dis you name this book "Thistles”?

Each of the titles in the Pistils series tie back in to what the main characters end up doing for a living as a double-entendre: juggling between being florists and private investigators or spies. But they also mean something… for example, the novel Sub Rosa is all about Vivian’s CIA past… “sub rosa” essentially means “happening in secret.” Thistles very much describes Vivian’s state of mind at the beginning of the series…very prickly and locked down into self-defense mode.

Absolutely, so I go back and read the last few chapters leading up to where I need to start writing…sort of like priming the pump.

I pretty much do everything that a writer “isn’t supposed to do," so I really encourage people to do whatever works. I HATE plotting in advance and I subscribe to the Stephen King school of being a “pantser” (i.e. by the seat of my pants), although he describes it much more eloquently than I do. I also edit and research as I go, because sometimes doing research to find out one thing reveals something AMAZING that I then work into the story. Discipline keeps me from going down the rabbit hole, though, that’s always something to be mindful of. I’ve always edited as I wrote since I was in elementary school. Recently, I tried to do the NaNoWriMo approach to just writing non-stop (even if you know it’s crap) with the intention of fixing it later, and it resulted in the worst writing of my life. I’m not trying to say my way is right and everyone else is wrong, but every time I see someone insisting that you MUST plot and you should NEVER edit as you go, it really rubs me the wrong way. As long as my process produces the desired results, who cares HOW I do it? I wish there was a lot less of that high-horse attitude and shaming in the writing community when it comes to do’s and don’t’s.

I’m in the homestretch of releasing Book Four of the series, Nightshade, which will be available on June 12th.

Either via my website, TwinTypeBooks.com, or any social media @twintypebooks. I’m most responsive on Instagram, though, so I’d encourage going that route. I’m pretty active on my mailing list as well, and I try to make sure those members get news before it goes public.