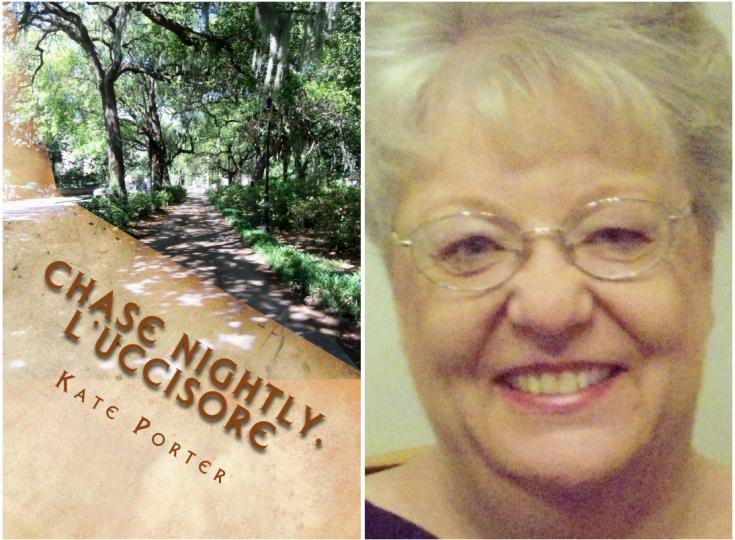 Kate Porter is an American writer based in South Georgia. She grew up on a small farm in central Indiana where she graduated from Owen Valley Community High School. Her first short story was published in the school newspaper when she was fifteen. Kate went on to study fiction writing at Greenville Technical College, appeared at numerous Comic Cons, book readings, author events and participated in author panels and has been featured as a guest author on a blog tour. In 2013 Kate was not only profiled in her hometown newspaper, Spencer Evening World, but she was also profiled in Woman’s Day magazine. EPK In 2014 Kate was the recipient of the NEW APPLE BOOK AWARD for the Mystery category for her novel, BLACK HARVEST, which also received FIVE STARS from Reader’s Favorite. Kate’s writing credits range from poetry to short stories to full-length books and manuscripts, and screenwriting. When she isn’t writing, or percolating her newest story ideas, she and her best friends are cracking each other up with their silly puns and holding entire conversations using GIFs. As our Author of the Day, she tells us all about her book, Chase Nightly.

Please give us a short introduction to what Chase Nightly is about.

Chase Nightly, L’Uccisore is the first book in the TEAM NIGHTLY, Urban fantasy series. This book introduces the team leader, Chase Nightly, who took over the team after his father had been killed by a vampire, who had once been on Toby Nightly’s team. Chase believes that it is his duty to not only protect the innocents of Savannah, but also his widowed mother, who he believes has no idea vampires even exist. When a Yankee uccisore, Rae Chandler, invades his territory, sparks fly. The two not only have to battle the growing vampire army, but neither of them want to re-live the past life they are both beginning to remember. It’s hard enough to follow their calling, but when you throw hearts and sex into the mix, it adds a whole new layer of complicated to the issues. Let’s not forget that the vampire king, Gordon Charles, has a bone to pick with Chase and his mother!

What inspired you to write about a Georgia boy and a vampire slayer?

Believe it or not, Chase Nightly was supposed to be a parody of all the vampire books and movies that had been popping up a few years ago. However, while I was putting together the synopsis and character bios, the characters were telling me to go a completely different way. I’d originally thought to set the story in Charleston. I’d fallen in love with the city when I’d first moved to the south. But, when I first laid eyes on the cobbled streets of Savanna, Chase and the team shouted in my head that this was their home. (Yes, I realize how crazy that sounds, LOL).

You grew up on a small farm in central Indiana. How has this influenced your writing?

I didn’t have a lot of friends while growing up, other than my sisters and brother. I remember how I would sit on the grass and daydream about how my imaginary friends would come and the adventures we’d have together. As I grew into my teens, it became an escape from my personal woes. Back then, it was practically unheard of for children to be living with their grandparents for any reason other than the tragic death of their parents. Mine were divorced and that was a stigma to a young girl back in the sixties and early seventies.

What is the hardest thing about being an author?

The bad reviews. And there isn’t an author out there who hasn’t received one. You have to grow a really thick skin, or you won’t survive as a writer. That’s a given. People can be pretty mean with some of their reviews. It’s hard enough to put your heart and soul into something that you love and believe in and then share it, then to have someone criticize it so vehemently, it hurts. Especially if you are already insecure about showing your work to others. You need to develop a rhinoceros hide to get past them if you want to continue writing.

Tell us more about Chase Nightly. What makes him tick?

Chase, believe it or not, is a sixth grade Social Studies teacher by day. He loves his kids and is patient and attentive as he can be without showing partiality. Of course, Chandra, one of his students, is a little drama queen and he can’t help but adore the budding, pre-teen uccisore. By night, he kicks vampire butt with the strength and agility of a bloodline vamp slayer. He’s one of the best. He also has a little issue with his temper. Chase usually has a really tight rein on it, until he meets Rae!

What makes Rae Chandler so special?

Rae is a contemporary New Yorker with the attitude that goes along with that moniker. She’s tough, opinionated and takes no BS from anyone. She was the leader of her own team in NYC. However, Gordon Charles sent his minions to the Big Apple to try to kill her. (Gordon, as a previous uccisore turned vamp, has gifts of his own and foresaw Rae and Chase’s futures and how they will affect his own plans). She and Chase had been lovers in past lives. She also remembers how much it hurt, in each of those past lives, to watch her true love die and refuses to go through that again.

There again, as I was writing the book, I would think, “the characters are going to do this,” but then, it’s like they would refuse, and they practically took on a life of their own. So yes, they pretty much did what they wanted. This book was the only one that I can honestly say did that. Once I completed Chase Nightly, the rest of the series pretty much followed how I wanted them to flow…Most of the time, anyway.

All of the Team Nightly series can be read as a standalone book. The same characters appear in all of them, adding a few new faces along the way. Each book focuses on a different team member and how their calling affects them and their actions.

The first thing I do when an idea for a new book hits me, is write a brief synopsis of the idea. From there, I expand on it and then create the characters and their bios. Once that is done, I begin working on putting it down in manuscript form. It usually goes through about two dozen incarnations before the first draft is even completed.

Since I’ve been laid off from work, (due to the COVID 19 pandemic) my writing habits have changed drastically. I used to have to carve out an hour here or there to write each day. Now, when I get up in the mornings, I get my coffee, sit down at my computer and go over the last few paragraphs of what I had completed the day before. Throughout the day, I take little breaks to work on other projects like my newsletter, social media updates, and the like.

Right now, I’m in the process of polishing up two, as yet, unpublished manuscripts that I’ve recently completed. These are thrillers and a lot different that the Team Nightly series, or even my other, stand alone books. They’re darker and more sinister, you might say.

What would you say is the one instance that you can look back on and say, “I’m an author?”

That’s a tough one. There are a couple of things that I could say gave me that feeling of validation. The first thing, I suppose was when I was interviewed, and then profiled, in Woman’s Day Magazine. That was definitely a crowing moment! But, the biggest thing, I think, that really made me feel as though I’ve arrived as a writer, was when my book, BLACK HARVEST, won the New Apple Book Award for best mystery. That was the first real award I’d won for my writing.

On my website at http://www.kate-porter.net they can check out not only what books I have out now, but some of my poetry, awards I’ve won and a couple of early trailers I’d posted on YouTube a few years ago. They can also keep up by signing up for my monthly, e-mail newsletter on the CONTACT page or even send a message with questions or comments if they wish. Also, they can visit my Facebook page at https://www.facebook.com/KJPorterwrites