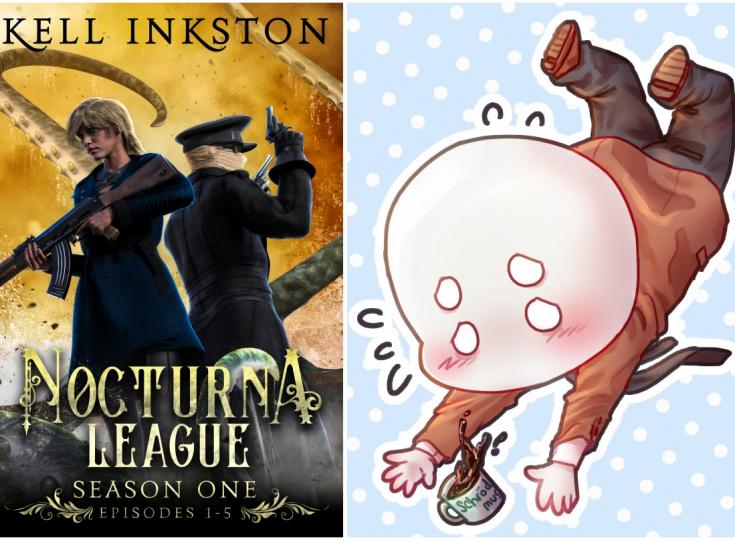 Kell Inkston is an analyst for S.E.E.R. and usually really busy with work, but still finds the time to write exciting fantasy/sci-fi thrillers. He is the author of the Nocturna League series, the Voidstar Empire series, and the Courts Divided series, all set in the Omniverse he created; as well as Breath series, which are short stories in a different setting. When he is not working on government stuff or writing, Kell enjoys long walks on the beach, video games, beverages, foiling his dogs' latest attempts at accidentally killing themselves, and reading.  As our Author of the Day, he tells us all about Nocturna League.

Please give us a short introduction to what Nocturna League is about.

Nocturna Leauge is what you when you pour the works of H.P. Lovecraft into some lighter, more adventurous fare like Pirates of the Caribbean. It's an action-packed romp filled with dark humor, adventure, and more than a couple of unique faces.

What inspired you to write about a woman who has to train to be a fighter instead of a fisherwoman?

If you want to look at it in the most literary way, Colette is all of us in away. Have you been told you can't do something because of simply being the way you are? That's her struggle. She's fighting day and night to become more than a fisherwoman from her simple village. She wants to do great things and save people, and I think most everyone can resonate with wanting to change the world for the better, even when others say it's not your lot in life to do so.

Tell us more about Colette. What makes her tick?

She's a brash one, but deeply inspired. The supposed death of her mother was the trigger that ignited the flames in her, and now she's not going to stop until she gets what she wants. People call her stupid, but you and I know she's just focused.

This is a compilation of 5 books. How do they tie in with one another? Did you plan from the start to write this as a season?

They all tie in book to book, but they're not necessarily in chronological order, so think about what you've read from episode to episode, okay? Originally they were slated to become a short story series, but seeing as this provided the best value for readers overall, I thought this would be a better choice.

Which book in this season is your personal favorite? Why?

My favorite for this season is probably a tie between The Sunken Breath and The Record of Ambition. I shuffle what I think to be some very sly tidbits of information in these pages, and the stories themselves were a lot of fun to write. The Sunken Breath is a bit off-key from the usual episodes as it doesn't have the crew actually visiting anywhere, instead favoring a more claustrophobic environment for such a spooky episode to take place. The Record of Ambition manages a lot of the initial introductions between characters, and I always love that.

Please tell us more about the cover for Season One and how it came about.

I wanted a sweet action shot with Colette and The Captain in it. To be honest I wasn't sure if they should be posed and ready to fire or if they should go in guns-blazing right away. I think for the second season cover we'll have some "bang" in it. Looking forward to it.

I "work" for the "government" so a lot of the things I'm good at are actually really specialized. In general, though I can walk on my hands, barely play music on the Ukulele, and cook some mean pasta!

Among the wealth of characters in Nocturna League, who was the most difficult to create?

The Captain is a continuous tightrope of possible inconsistencies and mistakes. I've had to be incredibly careful in the way I've written him as he is (perhaps literally) a walking vault of secrets. He has an entire casino of aces shoved up his sleeves, and I think it's going to be both wonderful and dreadful for readers to come to terms just how capable this guy is towards the end of the series. Is he good? Is he evil? Nay, he is just The Captain, and he has his own goals.

I originally told them all that there would be no smoking, but The Captain broke that one right away so I think it's just kind of a "tough luck" scenario now.

Many! Nocturna League is a series that is not fully experienced book by book. There are secrets pertaining to both the past and future of the characters in almost every episode, so you'll be finding many more hints on your second go-round than your first. It is a constant struggle to maintain a consistent, fascinating world that readers would like to spend hours and hours and hours in, so it's definitely an uphill climb sometimes.

The very first thing I do is I ask my self why I'm doing it. Sometimes that answer is "because it's fun" and that's good enough, but I usually shoot a little higher than that. I like it if people can take something back home with them over their voyage on The Eversea.

Do you ever suffer from writer's block? What do you do to prevent or combat it?

I do! It's stupendously rare for me, and once I identify it I can usually knock it out the day of, but it can sneak up on me and sit on my shoulders for several days with me hardly realizing at times. I combat it by meditating on the story and doing my best to figure out what the characters would do next. After all we're watching people doing things people would do, right? There doesn't always need to be a complicated method for every bit of art we do, I don't think.

Substation 7's 4th and final book: Emancipation (that may or may not have a few familiar faces)

-Courts Divided's 3rd book: Bloodkeep (A.K.A. Overlord and Knight's quest in spooky vampire castle... preorder will be up soon)

-The Scar: a side story for Courts Divided, that's trying for being as much literature as it is fiction

-Occult Vengeance, which is the first book in the explosively-cool Soot Knight series. I'm seriously way too excited about this one, and it's 75% off as a preorder special!

-And finally, a super big secret project which I can't tell you about. Sorry!

If you want more of my work check out either my website at https://kellinkston.com/ or my amazon storefront at https://www.amazon.com/Kell-Inkston/e/B00QPDIJRC.

If you want to spend time with me and argue about things we both like, you can check out the facebook group at https://www.facebook.com/groups/KellInkston/ or the secret discord server over at https://discord.gg/VmMdUA3. Thanks for reading, and I hope to see you around!