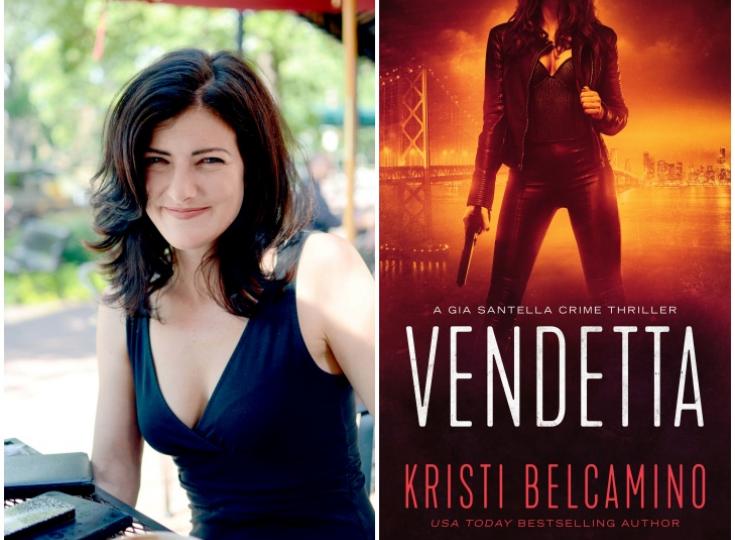 USA Today Bestselling Author Kristi Belcamino is a crime fiction writer, cops beat reporter, and Italian mama who also bakes a tasty biscotti. In her former life, as an award-winning crime reporter at newspapers in California, she flew over Big Sur in an FA-18 jet with the Blue Angels, raced a Dodge Viper at Laguna Seca, and attended barbecues at the morgue. Belcamino has written and reported about many high-profile cases including the Laci Peterson murder and Chandra Levy’s disappearance. She has appeared on Inside Edition and her work has appeared in the New York Times, Writer’s Digest, Miami Herald, San Jose Mercury News, and Chicago Tribune. Kristi now works part-time as a police reporter at the St. Paul Pioneer Press. As our Author of the Day, she tells us all about her book, Vendetta.

Please give us a short introduction to what Vendetta is about.

A rich heiress. A family tragedy. A mission to survive.

While Gia Santella seems spoiled and wealthy on the outside, she quietly hides her wounded heart from the world. Consumed by grief after the loss of her parents, she can barely handle the news of her estranged brother's overdose. As she attempts to process the latest blow to her family, she receives a letter that changes everything.

Shocked to discover that her parents' death was no accident, Gia learns that she's the next name on a killer's hit list. Vowing to find the one responsible and avenge her loved ones, the wealthy playgirl must stay one step ahead of the ruthless plot to end the Santella family line. To avoid yet another family tragedy, Gia has a bloody choice to make: kill or be killed.

Who is Giada Valentina Santella? What makes her tick?

Gia Santella is my alter ego, the woman I might have been in a different life.

She's a hedonist and a badass and doesn't give a F what anyone else thinks about her and her lifestyle. She has zero inhibitions and a large lust for life.

But she also has the biggest heart around and would give her life to save someone more vulnerable than she is.

When I began writing Gia, I didn't really know her, I just knew that she was a really fun character to write because I never knew what she was going to do next.

As she came to life on the page, loving her vices: drinking, drugs, and sex, I knew one thing for sure--she was about to take me for a wild ride.

Armed with an enormous inheritance, she would selflessly give everything to help someone who was down-and-out.

When we first meet her, in Gia in the City of the Dead, she has recently lost her beloved parents. She hasn't figured out how to deal with her grief in a healthy way so she at times is self-destructive and impetuous in ways that make me cringe and worry about her.

But somehow, she manages to survive.

I hope you love her as much as I love writing her.

Why crime fiction? What drew you to the genre?

I’m a veteran newspaper reporter on the crime beat. I wrote my first book as a form of therapy after my dealings with a serial killer who preyed on little girls. I learned early on that truth is stranger than fiction. A lot of my novels are what’s called “ripped-from-the-headlines” stories loosely based on true crimes.

I can whistle so loudly it will silence insects and animals in a four-block radius.

Readers say that the story was really fast-paced and impossible to put down. How did you pull this off?

I easily get bored when I read fiction so I naturally write books that keep people on the edge of their seat. A lot has to do with pacing but it’s also about ending chapters on cliff hangers and creating characters that people not only relate to but fall in love with.

Your characters are realistic and flawed. Why did you create them this way?

Because they are way more interesting if they are a little out of pocket. I wrote Gia because I’ve always loved characters who are fearless but also a little on the edge of society.

Are you a plotter or a pantser? Did you plan out the story before you started writing?

I like to outline and plot. It’s the only way I can write as many books as I do.

As the first book in a series it absolutely can be read as a standalone. But it never is. Once a reader is hooked, they have another fourteen books to read in the series—and counting.

Does making funny faces and talking out loud count as interesting? My average writing day begins with a cup of coffee at my desk in my bedroom or at a coffee shop. I write in 20-minute timed word sprints until I have my word count for the day. My word count has ranged from one thousand words a day to five thousand, but I like it best when my publishing schedule allows for about 2,500 words a day.

I just published the 14th book in the Gia series yesterday (Sept. 23, 2021) and am working on the plot and outline for the 8th book in the Eva Santella series. Eva is Gia’s assassin aunt.

I’m not on social media much but do put out a weekly newsletter that some readers have said they enjoy reading nearly as much as my books. You can find out more here and can get a free book to see if my writing is a good fit for you: https://kristibelcaminowriter.com/free-book/