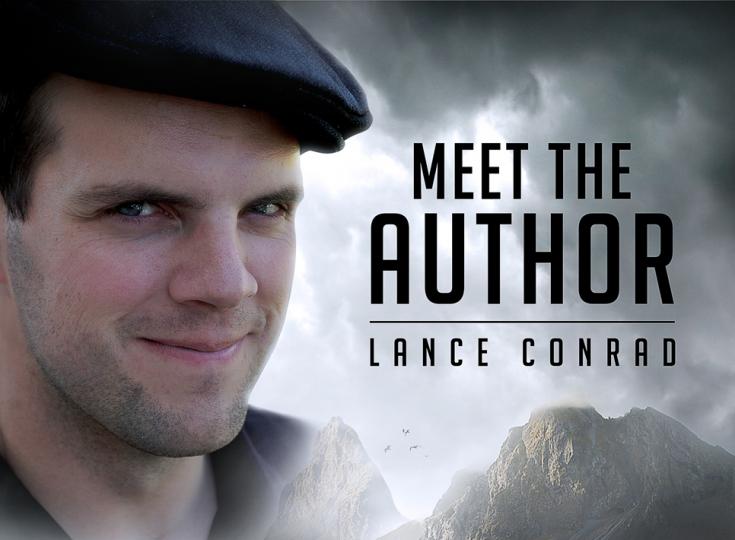 Lance Conrad writes compelling, thought-provoking fantasy novels that keep readers at the edge of their seats. For Conrad, writing could be a struggle (he claims to have the attention span of a hummingbird), but he is delighted when students who never read anything actually get into reading his books. As our Author of the Day, Conrad chats about The Price of Creation, how Fantasy can help people live better lives and gives us a sneak peek into what he is working on now.

Please give us a short introduction to what the Price of Creation is about.

The Price of Creation is set in a land where each person is born with a small Stone that decides what they’re going to do in their lives, what they’re going to be good at. The story focuses around this one family. Their son is born with a Stone that destines him for great destruction. So the family has to raise and train up their son while protecting him from their own people, who see the boy as a threat and want him killed.

When everything falls apart, the boy is banished to this land of savages, essentially. But there he is able to find out about the history of his own land, where the Stones came from, and what their true purpose and power really was.

Tell us about Sadavir. How was he conceived in your mind and what makes him so special?

I dare say most of us have had that moment in life when we discovered that we were different from everybody else and it made us feel isolated. Sadavir is not only born different, but dangerous. Like any boy, he wants friends and acceptance, but that is denied him. I think there are readers out there who could really relate to that loneliness and frustration.

Sadavir gets banished in the book. Why did you put him on this path?

It was really inevitable from the very beginning. When the villagers weren’t able to kill him as a child, he was destined to become more and more powerful until they couldn’t, which would only make them hate him more. At that point, it would either end in open bloodshed between them, or he would have to leave.

How did you come up with the concept of the Creators isolating themselves from all others with a wall that splits the entire continent?

That’s just real life, my friend. In fantasy, we can dress things up with symbolism, take them to extremes. The concept of people separating themselves from others because they feel like they’re better is as old as civilization.

Did you know right from the start you were going to make this into a series?

Oh yes. The Historian is a deeply compelling and personal character for me. You don’t know much of his story yet, but there is a lot to be discovered there.

“Fear spreads. This explains many of man's worst moments. But so does faith, and that explains man's redemption.“ – I think this helps highlight one of the main themes of the book. We’ve been seeing more and more how quickly fear spreads and how destructive it can be in people’s lives. But the opposite of fear is faith. As we start to believe in each other, when we believe in ourselves, we help others do the same. It often only takes one courageous voice to get the process started.

What was the biggest highlight of your writing career?

That’s a hard one. I’m probably most proud when a student who doesn’t like to read gets into reading through my books. But if you’re looking for a specific moment, I’d probably go with the time I sold two books to John Rhys Davies (Gimli from Lord of the Rings). That guy was amazing.

Most of the rules for my worlds are shaped around what I want my characters to go through, what decisions I want them to make.

Keeping focused. Those who know me best know that I have the attention span of a hummingbird on meth. Writing books has been an interesting exercise in focus for me.

Some people dismiss the genre as pure escapism—and nothing more. What would you say is the purpose of fantasy?

Let me make a quick comparison here with science fiction. Science fiction looks outward, imagining what might be possible, where humanity might go and what obstacles it might run into. It’s amazing to see how many of our modern technologies were first born in the minds of writers. In contrast, fantasy looks inward. Fantasy is about human nature. A good fantasy book should help the reader explore motives, why people do what they do. Fantasy can help people live better lives if they know what to look for.

Can you give readers a sneak peek at what's coming next from you?

Of course! My next book will be from The Historian Tales and will be titled The Price of Survival, featuring Chuck, the talking plant. ;)

There’s a joke in there, but you don’t get to know what the joke is until you read the book. What I can tell you for now is that we get to see a direct confrontation between advanced technology and powerful magics.

I have accounts on most social media platforms, but I don’t use most of them very often. Probably the easiest way to keep in touch is through my Word of the Day channel on Facebook and YouTube and through my website, www.lanceconradbooks.com