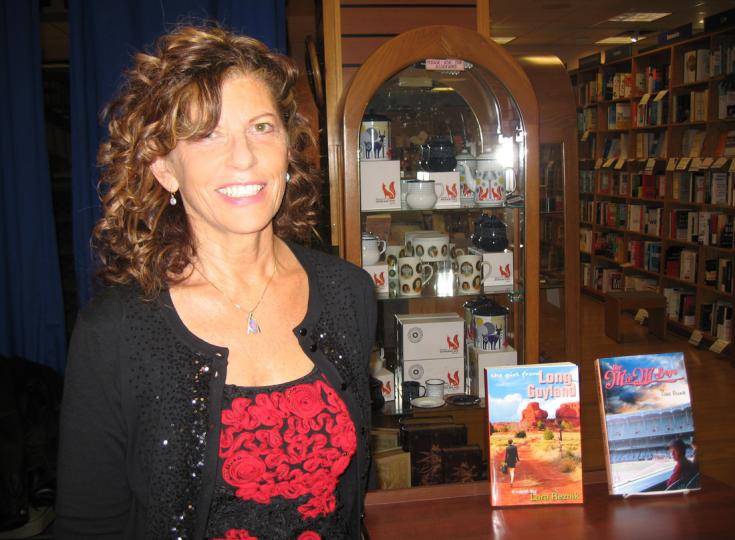 One day, while looking back on her full and interesting life, Lara Reznik asked herself: "what if some dark secret from the 1960s came back to haunt me now?" This inspired her to start writing The Girl from Long Guyland, which ended up becoming an Amazon bestseller multiple times. As our Author of the Day, Reznik reveals how much of her own life she weaved into the book, talks about being a baby boomer and how writing a thriller is like doing a jigsaw puzzle.

Please give us a short introduction to what The Girl from Long Guyland is about.

Set against a 1969 psychedelic love-in backdrop, The Girl From Long Guyland is shared through the eyes of Laila Levin when decades later, an unsolved murder pulls her reluctantly into her past. An exciting tale of past crimes and dangerous friendships.

What inspired you to write a memoir/thriller?

This is a great question. I’m at an age when I’ve begun reflecting on different periods of my life and examining what I’ve learned from them. I put myself back into the late sixties and asked the question what if some dark secret from that time period came back to haunt me now. I developed a cast of characters based on a composite of real people I knew, and created a fictive dream that unravels my protagonist’s current day life. The chapters alternate between 1969 and current day.

In which way is this book also a memoir?

The novel is set in places I’ve lived such as Austin, Texas, Bridgeport, Connecticut and of course Long Island, NY. Laila works for a utility in I.T. management as I did for 18 years, and the characters are based on a composite of people I’ve known both in the early 70’s and the 21st century.

Tell us a bit more about Laila - who is she and what makes her so special?

Laila starts off as a naïve 17-year-old who is over her head when she hooks up with a bunch of older townies in the New England factory town where she starts college. She feels like an outcast in Long Island and is searching for a place to belong. In her quest to fit in, she gets involved in a potent love triangle that nearly destroys her life. Only after a tragedy does she finally escape and discover her true sense of morality. Fast forward thirty+ years when Laila is forced to revisit her past resulting in a dramatic collision of then and now entwining her family, marriage, profession and ethics.

Why do you think the 60s and 70s work so well as a backdrop for your story?

Like a lot of baby boomers, the late 60’s and 70’s were an aberration from the rest of my relatively conservative life. Many of us did some wild and crazy things. While I wasn’t as naïve or crazy as Laila, I was a stereotypical hippie, feminist, and anti-war protestor. Evidently, the novel has struck a chord with other boomers who are looking to take a ride down memory lane to a time when we “lived for today,” and “loved the ones we were with.” The novel which commences in 1969 is particularly relevant as we celebrate the 50th anniversary of Woodstock.

You are ambidextrous. How do you think this ability affected your life?

It’s been a definite advantage in sports for sure. As a kid, I was able to pitch leftie in softball, which gave me an advantage with right-handed hitters. Currently in tennis, I often switch hands to a left handed forehand to substitute my weak right-handed backhand. Also, after developing a herniated disk on the right side of my neck from too much computer use, I seamlessly switched the mouse to my left hand. This helped alleviate much of the pain.?

How important do you think it is to be true to yourself?

It’s everything. If you’re not true to yourself you will never find happiness, nor will you be able to make anyone else happy.

You have written screenplays before, but this is your debut novel.  What has the experience been like, so far?

Honestly, it’s been amazing. I’ve wanted to be a writer my whole life and I’ve finally found a degree of success with my novels and am blessed to be able to write full time. It doesn’t get better than that for me.

You keep your readers guessing throughout the book. How did you pull that off?

Writing a thriller is like doing a jigsaw puzzle. I use a software program called Scrivener that emulates having index cards you can shuffle around electronically. I write a brief synopsis for each scene and chapter on the cards then move them around a gazillion times until the pieces all fit together.

Did you have a specific audience in mind when you wrote The Girl from Long Guyland?

Since the book is a story about baby boomers then (1970) and now (21st century), it’s natural that boomers have been my main audience. However, I’ve had a number of reviews from millennials who have said that they enjoyed learning about the time period when their parents were coming-of-age.

Do you have any interesting writing habits?  What is your favorite writing spot, what time of the day do you write?

My favorite time to write is after my morning workouts when I’m at my physical best. Generally, I plot out a summary of the chapters including the key elements of what writing guru, Dwight Swain, says are crucial for each scene: Goal, conflict, disaster. Each scene is followed with a sequel that contains the character’s reaction, dilemma and decision. I also write lengthy character sketches for all major and minor characters in the book. That way I understand what makes them tick. My favorite thing is getting in the heads of my villains.

Once I’m absorbed in writing a new book, it takes over my life. I plot a lot when I’m driving or during my body pump class at the gym. Once I plotted out a chapter in my head while having an MRI. It was a great escape from the paranoia of thirty minutes locked up in a tube.

I recently published my third novel, Bagels &Salsa, a prequel/sequel to The Girl From Long Guyland. Laila’s husband Eduardo has been hands down the favorite character of many of my readers. So, I wrote a multi-cultural romantic suspense novel set in 1977 about Eduardo and Laila’s love story. Throw in a psychopath, a drop-dead gorgeous ex-girlfriend, some pregnant teenagers, two conniving mothers, and hilarious cultural differences, and you have the ingredients for Bagels & Salsa. Currently, I’m working on The Little Girl From Long Guyland, a series of short stories thread together about Laila’s childhood.

I love to hear from readers at any on any of my social media.