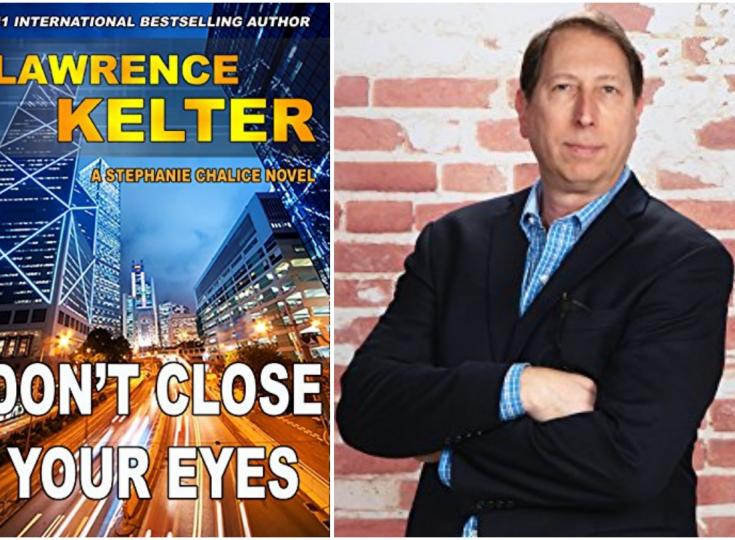 Lawrence Kelter is the bestselling author of more than twenty-five mystery and thriller novels. His Stephanie Chalice mystery series has topped bestseller lists in the US, UK, and Australia. In 2017 he penned BACK TO BROOKLYN, the studio-authorized sequel to the cult comedy classic My Cousin Vinny, which will be followed by WING AND A PRAYER, to be released this coming summer. He hails from New York but now calls High Point, North Carolina his home. Early in his writing career, he received guidance from literary icon, Nelson DeMille, who edited portions of his early work. Before he said, "Lawrence Kelter is an exciting new novelist, who reminds me of an early Robert Ludlum," he said, "Kid, your work needs editing, but that's a hell of a lot better than not having talent. Keep it up!" His novels are quickly paced and crammed full of twists, turns, and laughs.  As our Author of the Day, Kelter tells us all about his book, Don't Close Your Eyes.

Please give us a short introduction to what "Don't Close Your Eyes" is about.

"Don't Close Your Eyes" begins with a whimper and a bang—two seemingly unrelated deaths. The first is a teenage girl whose asthma suffocates her while sleeping. The second is a man shot on the tram that connects Roosevelt Island to Manhattan. Lying next to the man is the real puzzle: a woman who might appear to have died of natural causes if not for the handwritten note stuffed in her mouth that simply reads, "Look back." When a second woman is found dead with a rag in her mouth and another cryptic note found nearby, NYPD Detective Stephanie Chalice realizes that a psychopath is stalking Manhattan, on the prowl for a very special type of woman. Part of the murderer’s twisted game is leaving intentional clues for the police, clues designed not only to taunt, but also to do something much worse. Chalice will uncover startling truths about who she really is, but will it help her to discover the killer’s real purpose before another woman dies?

What inspired you to write a story about a murderer who is leaving clues?

“Don’t Close Your Eyes” is the very first book in a series of seven full-length books, three prequel novellas, and four “City Beat” novellas. Even before I typed the first word, I envisioned Chalice as the hero for a series and wanted it to be very special. The idea was to have Chalice so close to the crime and so emotionally committed that she wouldn’t be able to see the killer’s endgame. As she follows a trail of clues and corpses to the murderer, she also pursues her own demons, uncovering startling truths about who she really is.

Tell us more about Chalice.  Why did you pick her as your main character, and what makes her so special?

Wanting to create a unique character was all I could think about. Chalice had to be clever but not a smartass, intuitive but not omnipotent, warm but not emotionally overbearing, flawed but not broken. Most importantly, she had to have an engaging personality, and for me that meant she had to be funny. BookWire Review said that she had “an acerbic personality not unlike an arsenal of nuclear missiles”. Suffice it to say, she’s sharp and witty.

People say your work reminds them a bit of Robert Ludlum.  Who are some of your favorite authors in the genre?

To be clear, it was Nelson DeMille who said that, and he specifically called me “an early Robert Ludlum.” Early is a relative term. When he initially offered the blurb, I wondered if he was talking about a Pre-K Ludlum, but I soon came to understand that he was referring to Ludlum at the top of his game, a compliment that has me blushing to this day. Needless to say, Nelson DeMille is one of my favorites. My taste in literature is pretty straightforward—give me an intellectually dynamic hero with a personal stake in solving a crime and I’m hooked—Thomas Harris, early Baldacci and Patterson, Harlan Coben, and Linda Fairstein are my favorite storytellers.

You received some support from best-selling novelist Nelson DeMille early in your career.  What is the best writing advice he has given you?

Mr. DeMille probably did the nicest thing anyone has ever done for me. I was an ardent fan of his and had communicated with him several times via letter. I’d also encountered him at book signings and readings on Long Island where we both live. I asked him if he’d be kind enough to take a look at my work. Man among men that he is, he actually picked up a No. 2 pencil (likely the same one he was using to write the manuscript he was working on at the time) and voluntarily edited passages of the book. When he was done, he wrote me a letter and said, "Kid, your work needs editing, but that's a hell of a lot better than not having talent. Keep it up!" Keep it up were the operative words. I knew that I was quite far from perfecting my skills, but DeMille gave me the encouragement to move forward.

Readers say that they can feel a real camaraderie between the characters in this book.  How did you pull that off?

You’ve got to love the characters, don’tcha? As I mentioned, I gave Chalice significant flaws, some of which made it difficult for her to press on to see the case through to the end, but struggle through to the last page she did. She had to apprehend the killer, even with those chinks in her armor, so I created characters who helped “complete” her. Whether it was Ma, her loving nudge of a mother, Herb Ambler, a fed she adoringly calls “G-man”, the enigmatic Dr. Twain, or her partner, Gus Lido, they all had to bring something special to the table, a vital contribution without which Chalice would’ve failed.

Ha! Now you’re getting personal. Maybe you don’t want to know or shouldn’t know. All kidding aside, I became a grandfather two years ago, and my claim to fame is that I can make my granddaughter laugh in any of several ways. One of the first things she learned to say was, “Papa funny”.

The book contains a couple of interesting twists. Did you plan them out before you started writing or did some of them just "happen" along the way?

Some of the bigger twists were planned from the very beginning, but others presented themselves advantageously. I’m neither a planner nor a pantser, but something of a hybrid. I begin with what I hope is a strong conflict and a vague idea of how it will be resolved. I plunk down the opening chapters before coming up for air and looking around. At that point, I usually outline the next several chapters—wash, rinse, repeat.

Do you ever suffer from writer’s block? If you do, what do you do to combat it?

I’m told there’s no such thing as writer’s block, but there is “writer’s malaise” and I do suffer with that affliction from time to time. I’m told that the cure for this malaise is simply to keep writing, but experience has shown me my writing is flat if I’m not in the right frame of mind. I prefer to redirect, to focus on marketing, the look for the upcoming cover—anything to stimulate the juices with the hope that the creative gears will once again begin to turn.

Did you work against a deadline for this book? How hard was it to stick to it?

I was still working at my day job when Don’t Close Your Eyes was in development. When the idea first came together in my mind, I was so engrossed with the details that I was unable to sleep. I soon grew so tired that something had to be done. I began writing and the first draft was completed within ninety days.

Did you plan from the start to make this into a series? How do the other books in the series tie in with this one? Can they be read as standalones?

I always saw this book as the beginning of a series. I felt that Chalice was a quirky and likeable character with a strong sense of purpose that readers would enjoy. The current novels all take place within a rather short lifespan—perhaps a few years. In that short timeframe, however, quite a lot has transpired in Chalice’s life arc. There’s no grass growing beneath her feet. While I feel it’s better to start with book one and read in sequence, any of the tales can be read as a standalone mystery. 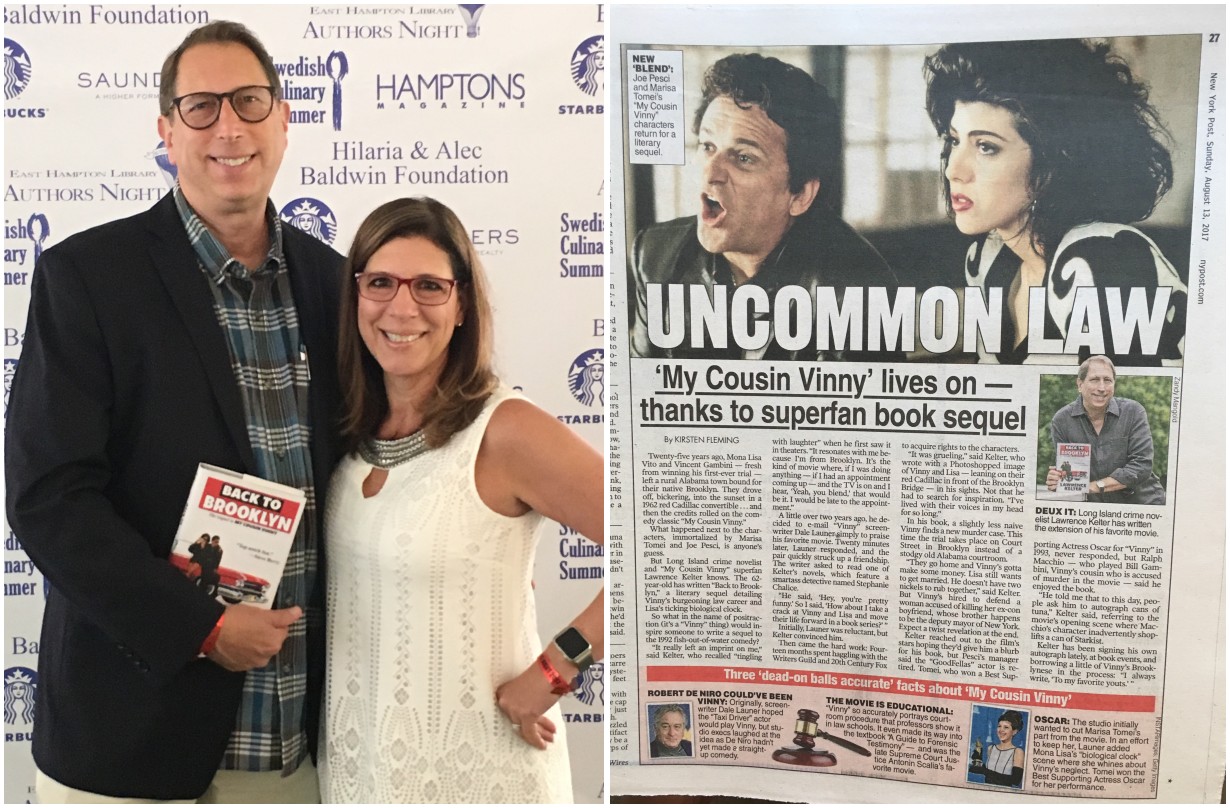 Writing is my fulltime job, and I try to treat it as such. I begin writing at eight or nine in the morning and finish when I feel I’ve accomplished enough, or I’ve gotten to the point where I’m just pumping out pages that don’t sparkle. That said, I’m not tied to the desk. If I feel I need to get out to mingle with folks to reinvigorate the thinking process, I do just that. I try to get out to exercise throughout the week. Although I detest the gym, I find myself breathing the stale air of a machine-filled room when the weather is bad and there aren’t any outdoor alternatives I can enjoy.

I read every review I receive whether flattering or dismal, and while I prefer the latter it’s usually the critiques that open my eyes. Some of the comments are completely valid, while others… what can I say? Everyone is entitled to his or her opinion.

I’ve taken Chalice in a new direction. She’s currently appearing in the City Beat series, novellas of about one hundred pages which I release once a month. City Beat began in April, so there are a total of four to date. The covers reflect more of a “periodical” than a conventional novel. Each cover bears Chalice’s City Beat stamp in the lower-left corner. As the title City Beat may suggest, the covers are all in the form of a newspaper front page. I’m hoping to build a devout following of short fiction mystery junkies eager for each month’s release.

I’ve also begun to write a series of books based on the iconic legal comedy “My Cousin Vinny.” Under license from Twentieth Century Fox, I’ve published a novelization of the film and a sequel entitled Back To Brooklyn in which Vinny and Lisa return home, and Vinny becomes immersed in a new murder trial. Writing these books has been the most fun I’ve ever had sitting behind a keyboard. Readers claim that they can hear Vinny and Lisa in their heads while they’re reading. I couldn’t ask for any more than that. I’ve always loved the movie and hope readers will enjoy Vinny and Lisa’s further adventures.

That’s an easy one. I have a blog I’m trying to become more consistent with and a full website devoted to the My Cousin Vinny project with iconic film clips, snapshots, and secrets about the making of the movie which are rather surprising. Here are some of the places I can be followed: www.lawrencekelter.com, www.my-cousin-vinny.com, www.facebook.com/larrykelter, www.twitter.com/larrykelter