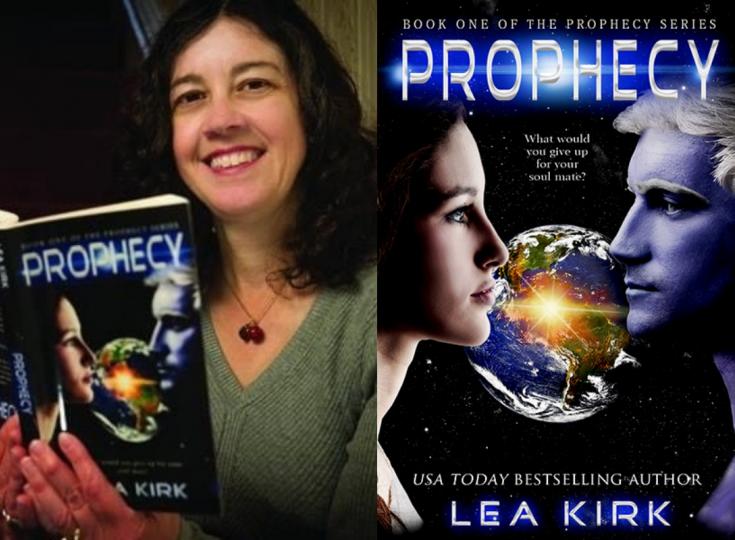 USA Today Bestselling Author Lea Kirk loves to transport her readers to other worlds with her science fiction romance. She's been making first contact, two hearts at a time, since her award-winning Prophecy series released in 2016. Her adventures continue with the tongue-in-cheek humor of the Silverstar Mates, a series that proves you're never too old for love. As our Author of the Day, she tells us about her book, Prophecy. 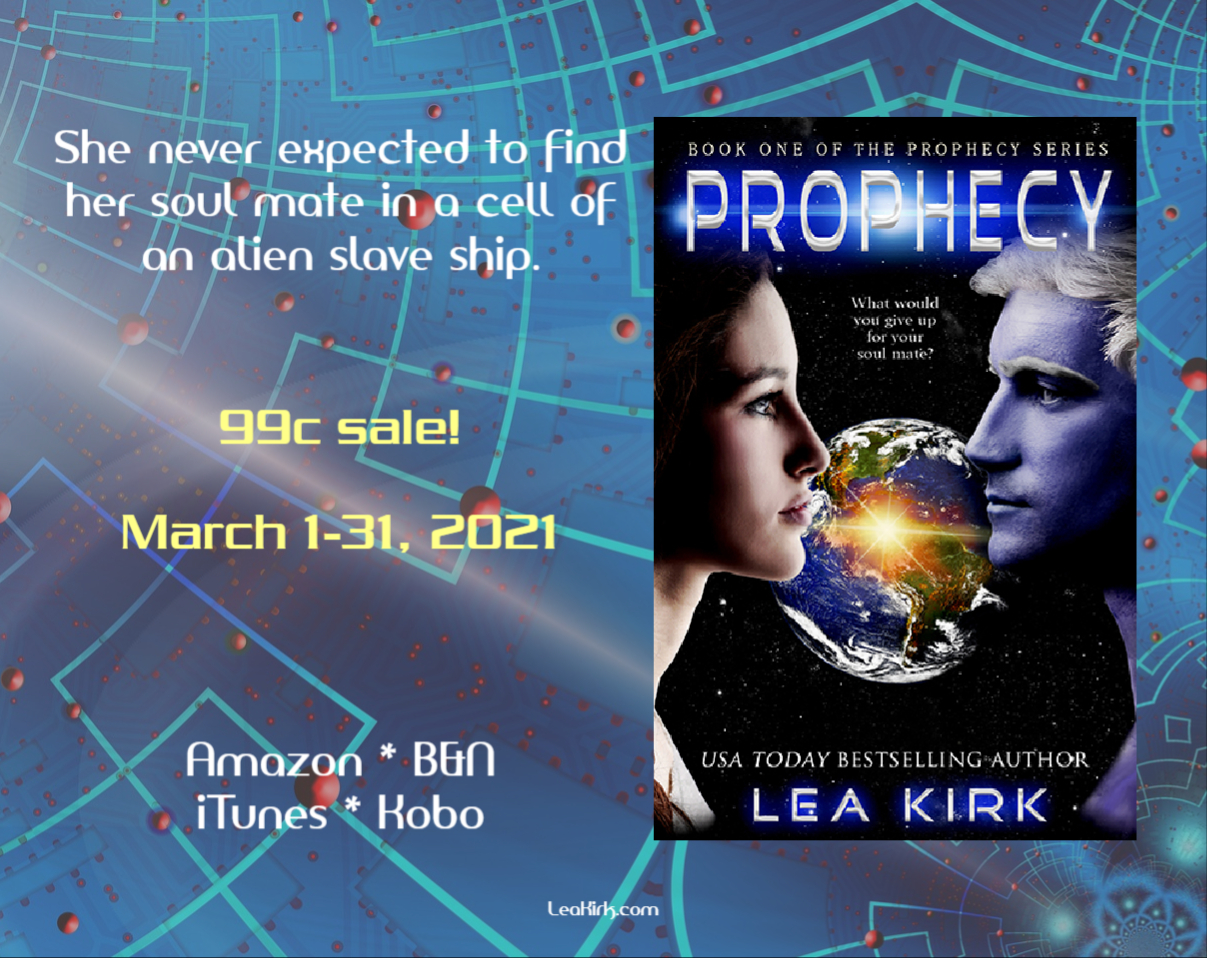 Please give us a short introduction to what Prophecy is about.

First, thank you for having me as a featured author today! I’m delighted to be here. Prophecy is my first book-baby. I started working on it when I was a teenager in the early 1980s. After multiple starts and stops—along with marriage and raising five real life kids—I finally finished and published this story in 2016. It’s about a young nurse who survives an alien invasion of Earth, and a betrayed alien fleet captain. His duty was to protect Earth from volatile spacefaring races until human technology had progressed enough for them to protect themselves. Unfortunately, someone had a different agenda.

Alexandra and Gryf first meet in a cell aboard their mutual enemy’s slave ship, and it does not go well. Unbeknownst to either of them however, they are destined to fulfill an ancient prophecy of Gryf’s people. So, fated mates, yes, but definitely not insta-love. More like a slow burn.

What inspired you to write about an ancient prophecy that holds the key to free war-ravaged worlds?

This probably won’t win me any points with parents, but the idea for Prophecy dropped into my brain one day as I was daydreaming in class. (To be clear, I was in high school at the time and had an established career as an in-class daydreamer.) As I stared off into space, a question surfaced: What if aliens invaded during the school day?

After school, I rushed home and started writing down everything my muse was telling me about the hero and heroine of this story. At the time, both characters where younger than they are in the final product. Also, her name was Alexis, not Alexandra. Gryf’s original name has long since escaped my memory, but I’m pretty sure I like both their final names better.

Why did you title this book "Prophecy"?

Much like I don’t remember Gryf’s original name, I also don’t remember the original title. I did do a thorough search through all the boxes of my childhood memories, but the notebooks I had filled in my teen years were MIA. So, I started pretty much from scratch 30 years later, and gave the book the working title of The Guardians. Meh. Guardian was such an overused title/series choice, even ten years ago.

Eventually, I joined my local RWA chapter. At a meeting, one of my new author friends and I brainstormed for a better title. By then I knew I was writing three books, and I wanted something short, sweet, and to the point. That’s when I came up with Prophecy, because, well, that’s what it’s about. After that he sequel titles, Salvation and Collision, came along pretty quickly.

Little known strange fact: All the books in this series have three-syllable titles. Really! My husband made that discovery.

Did you plan from the start to make this into a series? Can Prophecy be read as a standalone?

Originally, Prophecy was intended to be a standalone. But as the story progressed, Alex’s younger brother, Nick, started poking at me that he’d really like a story too. (Salvation) By then I’d learned that three-book series sell best, and I realized that the whole issue with the Anferthians (the invading species) had to be resolved. Who best to resolve that arc than Alex and Gryf’s (adopted) daughter, who had witnessed the deaths of her birth parents at the hands of the Anferthians during the invasion? (Collision)

Can Prophecy be read as a standalone? Yes. But, if you want the full story arc, Salvation and Collision are there for you. Not to mention two series related short stories, and two novellas that happen between the novels. 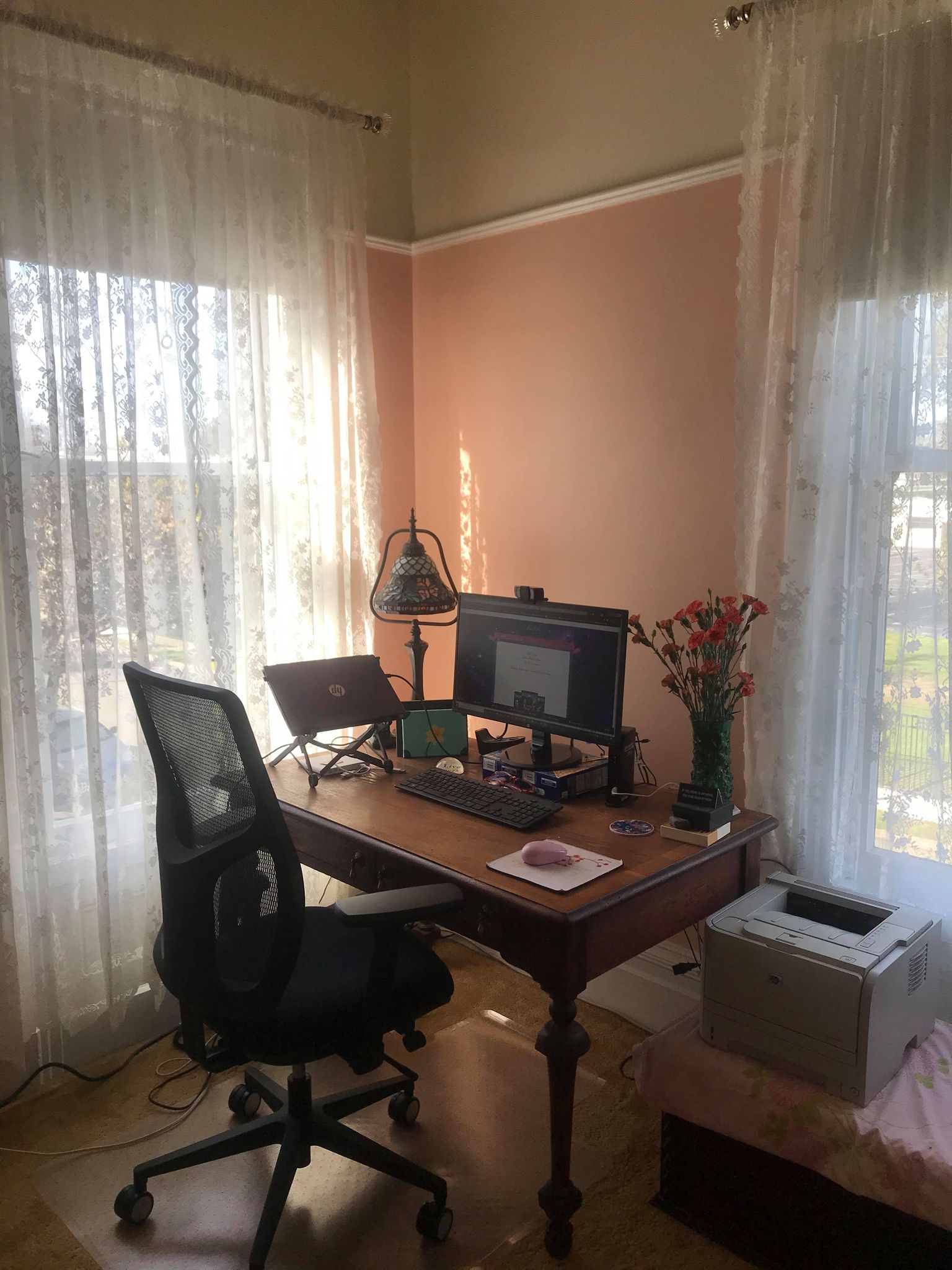 Which of your characters was the most challenging to write for?

Without a doubt, Alex’s brother, Nick. Nicholaus (yes, that is how his name is spelled) was all of eighteen in Prophecy when he discovered his unique gift to heal with a touch. Salvation picks up his story seven years later as Nick attempts to shun his gift and embrace a “normal” life on post-invasion Earth.

And I’ll tell you what else that little twerp shunned…me! After insisting I write his story, he stopped talking to me! So, there I was hearing half a story from his heroine, Sakura, but bupkis from him. After a couple of months of this, I finally threatened to ditch his story and devote my attention to his niece’s story instead. Fortunately, that did the trick and he started talking to me again.

What do you hope your readers will take away from this story?

This is easy, the takeaway is hope. Hope in humanity. Hope for humanity. And hope for our future.

﻿﻿I really love this quote from Leonard Nimoy: "I think it's my adventure, my trip, my journey, ​and I guess my attitude is, let the chips fall where they may." It reminds me to appreciate the positive experiences, and if things go haywire, it’s all part of the journey.

All through the Prophecy series, I’ve been a pantser. Pantsers are authors who make up their stories as they go along. Plotters are authors who outline and plan their stories before writing them. And Plantsers are authors who fall somewhere in between. For my most recent series, the Silverstar Mates series, I became more of a plantser, writing notes to myself about what would happen in each chapter. It seems to be making a difference in the time I spend getting that first draft cranked out. Who knows, maybe I’ll evolve into a plotter one day. But today is not that day.

Ooh! I love talking about my works in progress! Right now, I’m working on two stories. First, Fly with Me, the prequel to my Silverstar series. It’s a blast setting the stage for this series. The other one is the-book-that-wasn’t-supposed-to-be, Pardox…the fourth book in my Prophecy series.

These two series couldn’t be more different. The Prophecy novels are full-length and more on the serious side. The Silverstar books are a humorous take on pros and cons of intergalactic dating for characters fifty years and older.