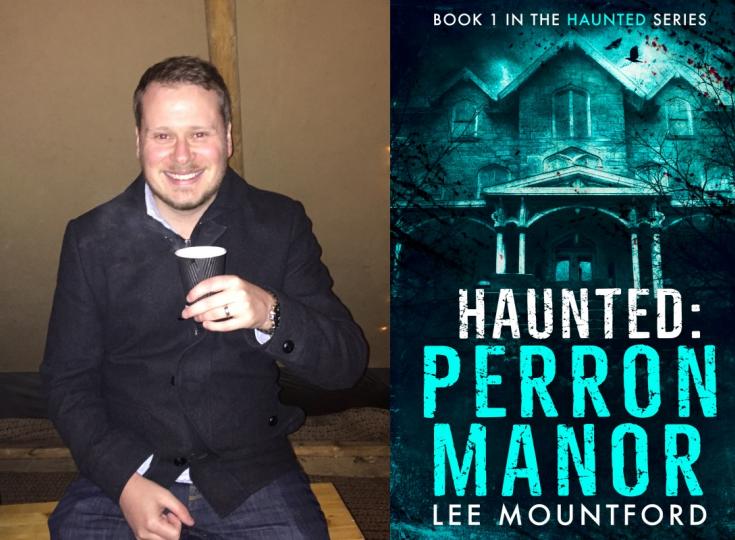 Lee Mountford is a horror author from the North-East of England. His first book, Horror in the Woods, was published in May 2017 to fantastic reviews, and his follow-up book, The Demonic, achieved Best Seller status in both Occult Horror and British Horror categories on Amazon. He is a lifelong horror fan, much to the dismay of his amazing wife, Michelle, and his work is available in ebook, print and audiobook formats. In August 2017 he and his wife welcomed their first daughter, Ella, into the world. In May 2019, their second daughter, Sophie, came along. Michelle is hoping the girls doesn’t inherit her father’s love of horror, but Lee has other ideas. As our Author of the Day, he tells us all about Haunted: Perron Manor.

Please give us a short introduction to what Haunted: Perron Manor is about.

Haunted: Perron Manor sees two sisters inherit a house they could never have dreamed of owning. However, the house comes with a secret… and a past. They start to experience paranormal activity that grows in severity, culminating in a terrifying climax that threatens their very souls.

Was there something in particular that inspired this story? That made you want to tackle this?

It has been a while since I’ve talked a haunted house story, and it was something I dearly wanted to return to. However, this time I wanted it to be a longer series, so Haunted: Perron Manor is the first book in the overarching story, one that continues with Haunted: Devil’s Door and Haunted: Purgatory.

Tell us more about Sarah and Cloe. What makes them so special?

They are sisters with a close bond who trust each other with their lives. Sarah, until recently, was in the military, and has experienced the horrors of war which has toughened her. But the evil at Perron Manor is unlike anything she has ever faced.

What fascinates you about haunted houses?

As far as horror goes, I think it is the perfect setting. Our homes are supposed to be safe and secure, so by turning that on its head I think it makes the horror more real and immediate. And most of the time when we read, we do so in our homes, so it really helps you get under the reader’s skin when talking about strange figures standing in the corner of the room, watching. If they are involved in the book (and I know this from experience) they can’t help to look up… just to check.

I used to hold a black belt in Taekwondo when I was younger, though now I’d probably struggle to lift my leg above my waist!

You live in the North-East of England. How has this influenced your writing?

Quite a bit, actually. I don’t think I ever really appreciated how much inspiration is just on the doorstep. However, for my second novel - The Demonic - I took an urban legend from my hometown and turned it into the backstory for that book. For my book The Netherwell Horror, I based the town of Netherwell on a coastal town called Staithes, which is close to me. I’ve even found out that there is a small, totally abandoned village really close to me, complete with a church, called Embleton, which I plan to visit soon. So I’ve definitely learned to embrace the influence of where I’m from.

Perron Manor is the first book in the Haunted series. Can it be read as a standalone? How do the other books in the series tie in with this one?

It can be read as a standalone, but it really acts as a jumping off point to the series, as there is a larger story to the house and just what it is. The series continues with Haunted: Devil’s Door and Haunted: Purgatory, both out now, and the upcoming Haunted: Possession.

Sometimes, yes. I like to work with an outline of the story before I get started, but I always know that things can change dramatically, so I never worry too much if that happens. Some even go and get themselves killed, which was not the intention initially!

Readers say this book had them hooked from the start. How did you pull this off?

Blind luck! Though I really just try and think what I want to read in a haunted house novel, and really try to deliver on that. I want to make the story creepy and scary as much as possible, and start with small scared but ones that draw the reader in to keep pushing on. That, and I really try and make the characters easy to root for, while still having their own flaws.

Your books have been compared to that of Stephen King, Dean Koontz, Clive Baker, and others. Who are some of your favorite authors in the genre and why?

That is very nice to hear, though I don’t put myself anywhere near the level of those authors. And I’d say King and Barker are some of my favourites, along with Lovecraft, as I love the sub-genre of cosmic horror that he helped pioneer. I also love William Peter Blatty’s The Exorcist, and the Red Dragon and Silence of the Lambs by Thomas Hardy. But there are scores of other writers I could list as well.

Finish what you start. That was always my biggest problem. I’d start loads of projects, but they would all fizzle out and I’d want to move on to the newest idea. Once I got into the habit of seeing things through, which takes work and discipline, things really started to move forward for me.

Do you have any interesting writing habits? Sources of inspiration? Favorite writing spot/time of day to write?

As far as writing habits go, I just try and make sure I do it as often as I can… daily, if possible. But I don’t beat myself up if I miss a day or two, as long as I know I’m still moving a project forward. I’ve found that if I get some words done early, then a writing day goes much more smoothly.

I’m currently working on the 4th book in the Haunted series, Haunted: Possession, as well as plotting out a new series set in Victorian Britain, which I’m really excited about.