Linnea Tanner - Fascinated with Ancient Rome and Britannia
Posted on 27th of March, 2020 by Naomi Bolton 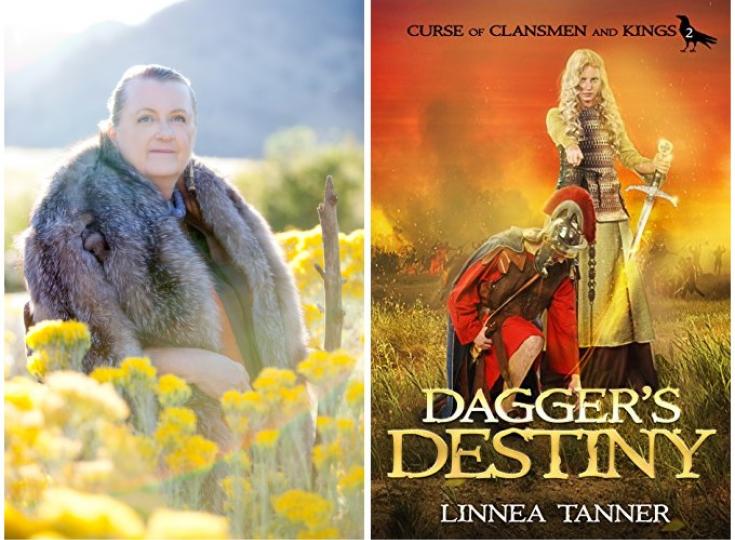 Award-winning Author Linnea Tanner weaves Celtic tales of love, magic, adventure, betrayal, and intrigue into historical fiction set in Ancient Rome and Britannia. Since childhood, she has passionately read about ancient civilizations and mythology which held women in higher esteem. Of particular interest are the enigmatic Celts who were reputed as fierce warriors and mystical Druids. Depending on the time of day and season of the year, you will find her exploring and researching ancient and medieval history, mythology and archaeology to support her writing. As the author of the Curse of Clansmen and Kings series, she has extensively researched and traveled to sites described within each book. A native of Colorado, Linnea attended the University of Colorado and earned both her bachelor’s and master’s degrees in chemistry. She lives in Windsor with her husband and has two children and six grandchildren. As our Author of the Day, Tanner tells us all about her book, Dagger's Destiny.

Please give us a short introduction to what Dagger's Destiny is about.

Dagger’s Destiny continues the story of Catrin, a Celtic warrior princess, and Marcellus, the great-grandson of Mark Antony, that began with the first awarding-winning novel, Apollo’s Raven, in The Curse of Clansmen and Kings series. Book 2: Dagger’s Destiny sweeps you into an epic Celtic tale of forbidden love, mythological adventure, and political intrigue in Ancient Rome and Britannia.

When the story begins, war looms over 24 AD Britannia where rival tribal rulers fight each other for power and the Romans threaten to invade to settle their political differences. King Amren accuses his daughter, Catrin, of treason for aiding the Roman enemy and her lover, Marcellus. The ultimate punishment is death unless she can redeem herself and prove her loyalty by forsaking Marcellus and defending their kingdom. Yet, when Catrin again reunites with Marcellus, she is torn between her love for him and duty to her people.

What inspired you to write about a Celtic princess accused of treason?

The choice of love versus duty is a universal theme that has fascinated me in such stories as Mark Antony and Cleopatra and Juliet and Romeo. I explore this theme in Dagger’s Destiny in which both a king and his daughter struggle to balance love and duty. Beginning in Dagger’s Destiny, Catrin faces consequences for saving her enemy lover, Marcellus, in a prisoner exchange that erupted into a conflict between her people and the Romans.

King Amren, who was seriously wounded in the conflict, accuses Catrin of treason for betraying him and his people. It is his duty as king to administer the same punishment to his beloved daughter as he would exact on any traitor in his kingdom. Ultimately, King Amren also faces ramifications for his brutality as king to maintain power while his daughter sacrifices almost everything for love. The struggle to balance love and duty will continue to be a theme throughout the series.

Why Ancient Rome and Britannia? Where does your fascination with this time period come from?

Since childhood, I’ve been fascinated with Ancient Rome after watching 1960’s movies such as Ben Hur and Spartacus and reading ancient history. Although the Roman empire was often depicted as corrupt and debauched, its culture and language left a lasting impact on modern-day western civilization.

On a business trip to the United Kingdom, I was fascinated by the statue of Boudicca, a warrior queen, and her daughters in a chariot. I learned that this formidable Celtic queen united the tribes in ancient Britain to rebel against the Romans. And she almost succeeded!

I became intrigued by the Celts and discovered they also had a lasting impact. During their golden age in 200-300 BC, the Celts spread from Ireland, across Europe, and to Turkey. They were a tribal, warrior society with oral traditions and a common language.

How much research did this book require from you? What is the most interesting aspect of this research?

I extensively researched Roman and Celtic history and visited archaeological sites in the United Kingdom and France. The research on the Celts was the most challenging as they left limited written records. Their history was told through the eyes of their enemies: Julius Caesar and Greek and Roman historians. Monks in medieval monasteries wrote down stories from oral Celtic traditions in Wales and Ireland, but the stories often reflected their Christian values.

One of the most interesting aspect of my research is reading about archaeological evidence that puts a different spin on the Roman conquest of Britannia in 43 AD. Evidence suggests the Roman heavily influenced the politics of British kings after the military excursions of Julius Caesar in 55-54 BC. There was probably a Roman military presence in Britannia to protect their interests and pro-Roman kings prior to Claudius’s conquest in 43 AD. The political situation was not much different than Cleopatra’s Egypt.

This is Book 2 in the Curse of Clansmen and Kings series. Can it be read as a standalone?

Although there is sufficient background information so Dagger’s Destiny can be read as a standalone, it would be helpful to read Apollo’s Raven first for the background on how the story begins.

I am an avid gardener. Last year, I grew cantaloupes up to 10 pounds. I also have about 80 roses which I constantly prune and fertilize during the growing season.

The cover represents Catrin’s struggle to forsake Marcellus so she can accept her duty as a warrior to defend her kingdom. In the background, her homeland is ablaze and in conflict—a consequence of her forbidden love. A curse she tries to break is etched on the dagger in her hand.

Why did you find it important to weave mythological references and mystical experiences into the story?

In the beginning, the Curse of Clansmen and Kings series was intended to be a historical fiction with elements of Celtic religion sprinkled in. However, I couldn’t truly tell Catrin’s story without weaving in her mystical experiences to reflect her culture and pagan beliefs. One of the aspects I found most interesting about the Celts is their belief that the soul is immortal and, upon death, enters into a new body. Celtic artwork reflects how gods or semi-divine shapeshift to appear as animals, a recurring theme in Irish and Welsh mythology. Merlin’s mystical powers from King Arthur legends reflect this Celtic pagan belief. I freely use the concept of the soul to explain Catrin’s shapeshifting abilities and how she views the world.

Tell us more about Catrin. What makes her tick?

Catrin is a strong-minded adolescent fraught with conflicting emotions about her mystical powers that she can’t seem to control and her struggle to do her duty despite her overwhelming blind love for Marcellus. In the eyes of her people, she is a fool. Yet, despite her challenges, she rises above them, even when she is knocked down.

What is your favorite line from this book? Please explain why.

This was a difficult question to answer, but I finally chose a line near the ending: “Pull the dagger out of the stone and embrace my curse as your destiny.”

This line is intended as a metaphor that a person’s character is tested by fire and cast into stone as a weapon to overcome life’s challenges and to fulfill his or her destiny.

The book contains quite a couple of twists. Did you plan them all out before you started writing?

Ideas for twists often bubbles up during periods of writer’s block. It is a signal that my plot is not working, and I need to do something different. It is as if the characters in my head are telling me to get out of the way and allow them to tell the story.

I’m now working on Book 4: Skull’s Vengeance in the Curse of Clansmen and Kings series. Although this book has been drafted for a few years, I’m changing the storyline because of unexpected twists in Book 3: Amulet’s Rapture. The epic series continues to evolve as I edit and revise.

Readers can discover more of my work at the websites below:

Readers can interact with me through social media provided below: 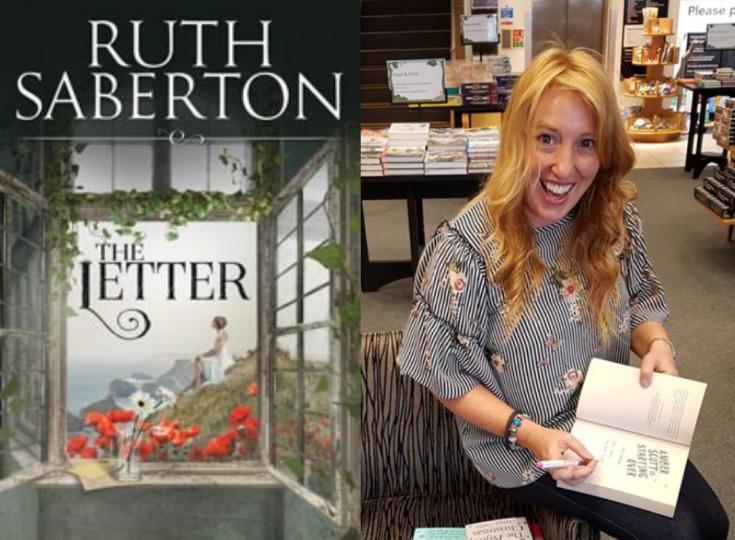 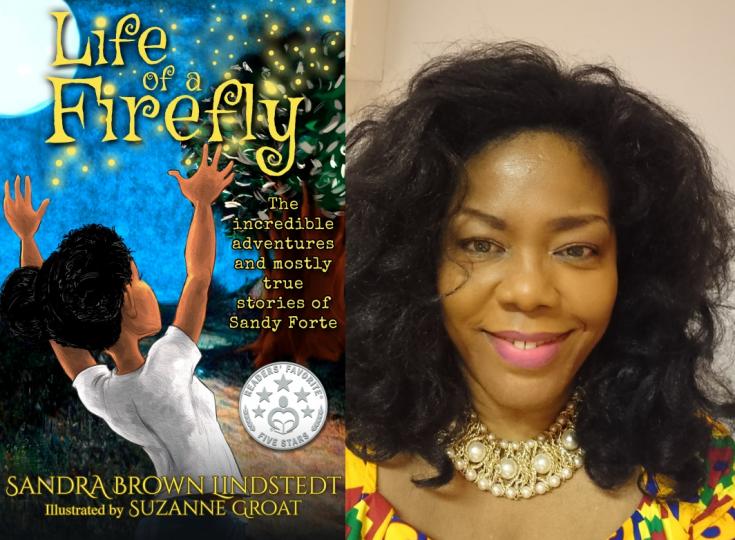 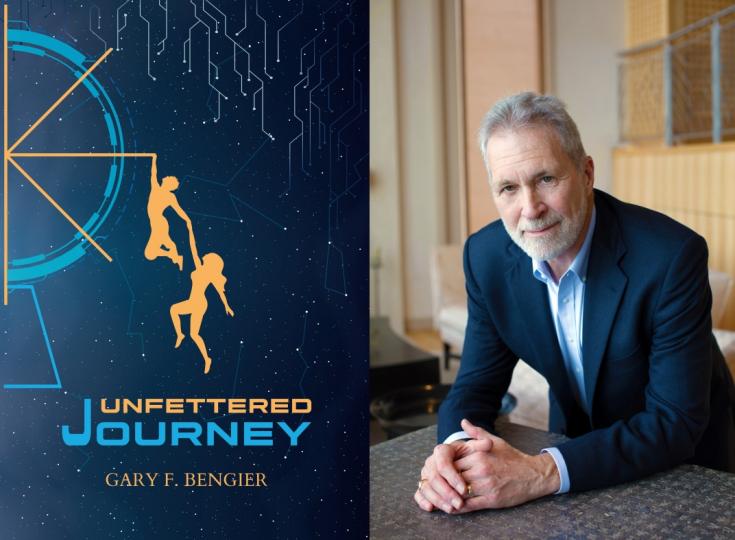 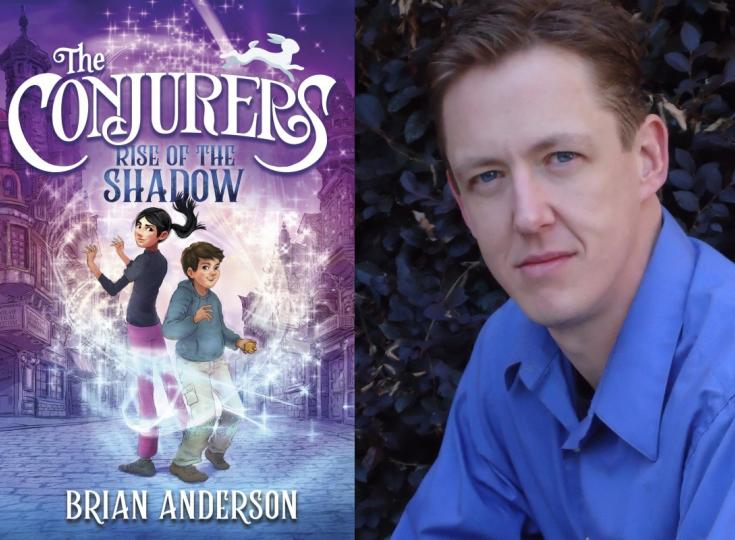 Brian Anderson - What if Magic was Real
Sign up 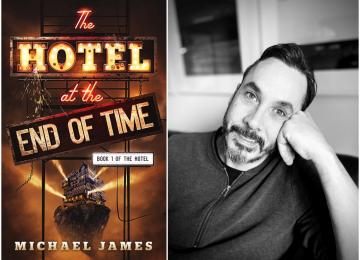 Michael James - Non-Stop, Thrilling Adventure
FEATURED AUTHOR - Michael James spent his formative years writing, and when he wasn't writing, he was writing. A mistaken belief that a "real" job would be more satisfying led him down a dark path that did not involve writing but did involve meetings. Fortunately, he has since course-corrected and is back on the right (write? Ha!) path. The Hotel at the End of Time is not his first book, but it is the one with the most Hotels in it. He lives in Canada with his family.