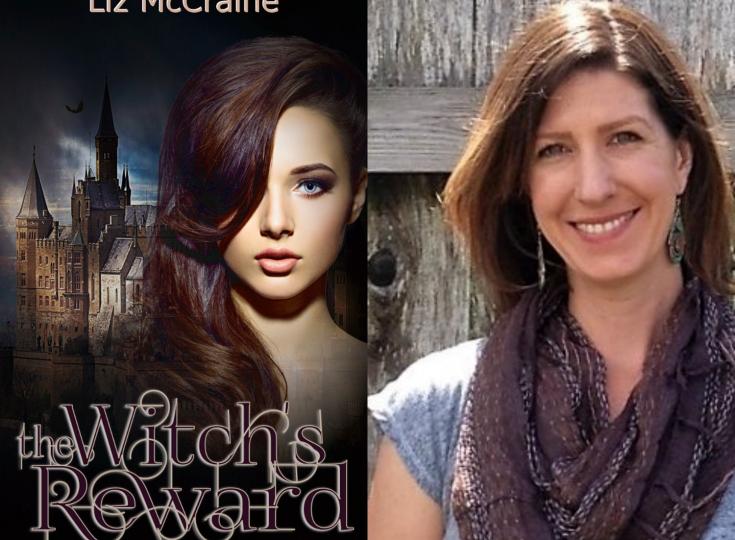 Liz McCraine has a degree in Psychology from Brigham Young University, which she puts to good use psychoanalyzing her children and developing fiendish book characters. When she’s not galloping after her family, Liz enjoys working with horses, learning new languages, and trying not to kill houseplants. As our Author of the Day, Liz tells us all about her latest book, The Witch's Reward.

Please give us a short introduction to what The Witch's Reward is about.

The Witch’s Reward is about a 17-year-old girl from a quaint village who discovers she has a magical ability. In the kingdom of Aggadorn, however, witchery is punishable by death, and Larra’s dreams of a life filled with love and adventure are shattered when she’s arrested. Her only hope is to receive the king’s pardon, but an unforeseen enemy will do anything to keep her from reaching the palace. Larra longs to trust the handsome young captain who arrests her to keep her safe, but he carries secrets of his own. Left with no one to depend on but herself, Larra must find the strength to survive and the courage to overcome a surprising new enemy who has the ability to destroy not only her, but the entire kingdom.

What inspired you to write a story about a girl who gets arrested for witchery?

My husband and I once rented a movie called The Witch Hunter, in which Nicholas Cage transports a witch to a monastery. It was definitely more horror than romance, but it made me wonder, “What if the witch were good instead of evil?” One idea sparked another, and Larra’s story unraveled shortly thereafter.

How much have your travels influenced your writing?

A great deal. I’ve had the opportunity to travel all over the world, and each beautiful place has left an impression on me. When I create scenes in my books, I draw details from those places. For example, the forest in The Witch’s Reward is based on the dense woods of New England, where I grew up. Similarly, the red dirt and gray cement homes of Illydian from Beyond the Sands is largely based on a small, nearly desolate town outside of Santo Domingo, Ecuador, where I lived for six months in my early twenties.

Tell us more about Larra Stoneworth. What makes her so special?

What makes Larra so special is the quiet fortitude with which she confronts her challenges. She's not loud or impulsive or feisty like her friend Kiera. Rather, her courage comes from an inner strength. She’s resilient, and she’s honorable.

I love to train horses, especially hunter/jumpers. There’s something magical about working with them. They’re unpredictable. They can spook at shadows, buck when they feel pain or joy, and they have the strength to kill you. Yet with patience, persistence, and kindness, you can teach them to obey your slightest touch.

Robin McKinley influenced my work, for sure. When I think of a great writer who knows how to combine both romance and fantasy and who can end her stories well, she’s it. The Blue Sword and The Hero and the Crown are two of my favorite books of all time.

Say this book ends up on the big screen, which actress do would you like to see in the role of Larra?

I’d love to see someone similar to Jessica Brown Findlay as she plays young Lady Sybil Crawley in Downton Abbey. On the screen she’s quiet yet resilient, intelligent, and beautiful. She’s gentle without being a pushover. Any actress who can manage similar results would make a great Larra.

All the time. I keep reminding them to stay between the lines I set for them, but they tend to snub their noses at me. The worst was Kiera, the young farm girl who Larra saves at the beginning of The Witch’s Reward. Kiera’s feistiness earned her a story of her own in Beyond the Sands.

I get the munchies when I write. I try to stick with carrots and healthy snacks, but too often my sweet tooth overrides my self-control. Swedish Fish are my downfall. As for an average writing day, things can get crazy with four young kids at home. Uninterrupted quiet time is a myth, so I’ve learned to adapt. I do most of my writing while the older children are in school and the baby is napping, but sometimes in order to make my daily goal, the laptop comes with us to the playground or takes up residence on the kitchen counter as I prepare dinner.

What a great question! I write for readers who want all the fun of a good romance without the explicit sex scenes, and who love the magic of a fantasy without being left hanging at the end (too many fantasies don’t end well, in my opinion). I’m not trying to change anyone’s life or prove anything with my writing. I just want to provide good, clean entertainment, the kind that youth don’t have to hide from their parents and that adults can enjoy when they need a break from reality.

I’m currently working on the fourth book in my Kingdom of Aggadorn series. I don’t have a title for it yet, but like its predecessors it has danger, romance, and a happy ending. And best of all…unicorns! My main character is Annamae, from the third book in the series, Beyond the Sands. She’s a witty redhead whose life goals take an unexpected turn when she fails to secure a wealthy fiancé.

My work is always available on Amazon, under “Liz McCraine.” And I love hearing from readers! They can find me on Facebook, Goodreads, or send me a note through my website, Lizmccraine.wordpress.com.