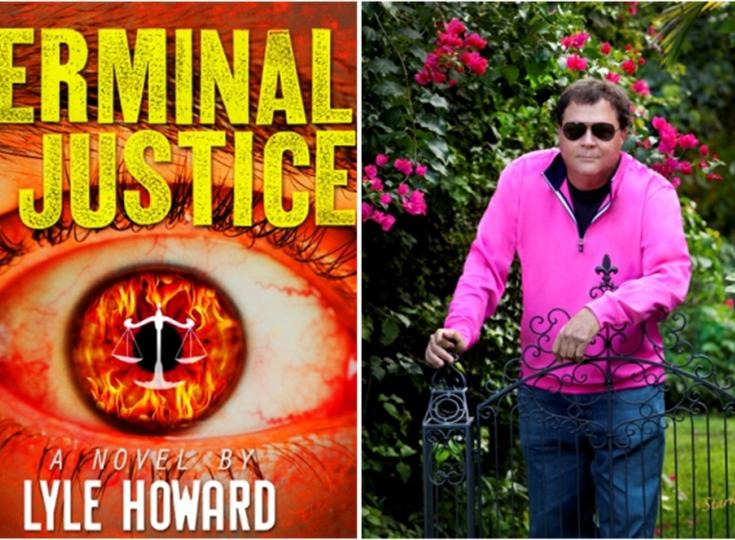 Lyle Howard has come a long way since he published his very first story in 1982. Howard mostly writes page-turners that keep the readers wanting more and Terminal Justice is no exception. As our Author of the Day, Howard reveals the secret A-B-A-B code behind his page turners, talks about conspiracies and how Terminal Justice was inspired by a talk with a fellow passenger on a plane.

Terminal Justice is about a clandestine agency that uses terminal patients to exact justice on guilty criminals who have managed to use the legal system to escape their punishment.  It is about Gabe Mitchell, a City of Miami police officer who is recruited by this cabal when he is diagnosed with terminal cancer.  He has special skills that the mastermind of this plot needs to bring an infamous politician to justice.  When Mitchell learns that his diagnosis was wrong, it is up to him to save the life of his intended target and get to the bottom of the conspiracy.  The reader will not know the answer until the very last sentence.

What inspired you to write about terminally ill becoming avengers?

I was flying back from Las Vegas some time ago, and sat next to an Oncologist.  We started talking, one thing lead to another, and my warped mind had the plot before we landed.

Why did you pick Las Vegas as the scene for the first detonation?

So many landmarks, so many places to blow up.

How much do you think you have evolved as an author since you published Mr. Sandman in 1995?

Actually, Mr. Sandman is a reprint first published in trade paper in 1982.  So my writing style has had quite a long time to develop.  I don’t necessarily follow any specific conventions when I write.  I just imagine I am watching a movie and reporting on it.  Many readers have said I might jump around from character to character too much in a single scene, but I want to report on what each character is feeling or thinking no matter when it happens.

Your characters are very believable, with readers really feeling what they are experiencing. How do you pull this off?

I want you to feel for each one of them, bad or good.  I want to show you their motivation.  The worst thing you can have in a story is the lunatic killer who never explains his reasoning.  Each character, male or female, is an extension of myself.  I know that sounds strange.

You teach journalism to young writers. How much do you think has the world of a journalist changed in the past decade?

Unfortunately, not  for the better.  Technology is killing the newspaper as we once knew it.  I am good friends with writers and editors at the Miami Herald, and the differences nowadays are staggering.  News is instantaneous and written in 150 character snippets.  Sad but true.

Terminal Justice contains quite a couple of unexpected twists. Did you plan them out before you started writing or did some of them just "happen"?

I know nothing in advance.  I did have the ending first, that much I will say.

I am an incredible judge of character if that is a skill.  It’s almost a sixth sense about people.  I know immediately who I can trust and who to watch out for.  Any other skills, you will have to ask my wife about.

Terminal Justice revolves around conspiracy. What do you think it is about conspiracies that make them so fascinating for people to read about?

It’s the fact that we don’t really believe they are possible.  Turn on the news tonight.  Enough said.

Say Terminal Justice ever gets a movie adaptation, which actor would you like to see in Gabe Mitchell's role?

Mark Ruffalo is who I imagined in the part.  He plays disheveled great.  Gabe is down on his luck, but never gives up for the sake of his son.

The book is a real page-turner. What are some tricks you use to keep readers hooked throughout?

Always leave a chapter hanging and then skip a chapter before you return to those characters.  I like to call it.  A-B-A-B.

Tell us about your writing habits. How do you remain productive?

Teaching is all consuming for me during the school year, so believe it or not, most of what you read is pumped out during the summer break or in the evening if I am inspired.

A TRACE OF REVENGE is the next book and it is probably my favorite story so far.  My wife teaches American Sign Language and I’ve always wanted a deaf hero and to write a story from that silent perspective.  I also love baseball, so combining the two into a suspense thriller is a fun challenge.

All my books are available on Amazon and I invite all of my readers to write me at [email protected] or friend me on Facebook.   I love all my fans and knowing that they are willing to give up their valuable time to read my stories always amazes me.   I look forward to corresponding with them and keeping them updated on the latest promotions and insights.

Thank you so much for giving me the opportunity. 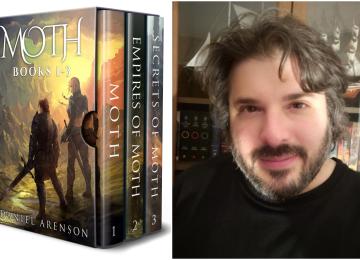 Daniel Arenson - A World of Danger, Secrets, and Wonder
FEATURED AUTHOR - Daniel Arenson is a bookworm, proud geek, and USA Today bestselling author of fantasy and science fiction. His novels have sold over a million copies. The Huffington Post has called his writing "full of soul." He's written over seventy novels.  As our Author of the Day, he tells us about his book, The Moth Saga.