Madame Presidentess - The First Woman to Run for President
Posted on 28th of December, 2018 by Naomi Bolton 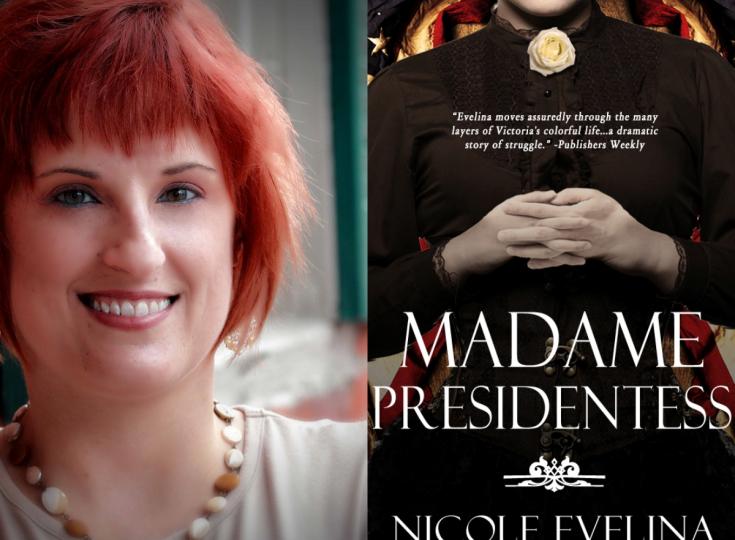 Nicole Evelina is a historical fiction, non-fiction, and women’s fiction author whose six books have won more than 30 awards, including three Book of the Year designations. The TV/movie option for her book Madame Presidentess, was recently acquired by Fortitude International. Her fiction tells the stories of strong women from history and today, with a focus on biographical historical fiction, while her non-fiction focuses on women’s history, especially sharing the stories of unknown or little-known figures. In this author interview, we chat about Madame Presidentess, strong women in history and more.

Please give us a short introduction to what Madame Presidentess is about.

Madame Presidentess is historical fiction about the real-life first woman to run for president in the United States, Victoria Woodhull. She ran in 1872, which was 48 years before women got the right to vote. Victoria was also the first woman to run a stock brokerage on Wall Street (along with her sister, Tennie), the first woman to speak before the House Judiciary Committee on women’s suffrage, and one of the first women to run a weekly newspaper (also along with Tennie). All of these accomplishments are despite the fact that she didn’t have much formal education and was born dirt poor to parents who were criminals. Victoria is a self-made woman, a true rags to riches story, and certainly an outspoken woman ahead of her time.

I learned about Victoria by seeing a picture of her with an alluring caption on Pinterest, of all places. The caption said, “Known by her detractors as ‘Mrs. Satan,’ Victoria Claflin Woodhull, born in 1838, married at age fifteen to an alcoholic and womanizer. She became the first woman to establish a brokerage firm on Wall Street and played an active role in the woman's suffrage movement. She became the first woman to run for President of the United States in 1872. Her name is largely lost in history. Few recognize her name and accomplishments.” I immediately had to know more and began my research. I mean, any woman called “Mrs. Satan” is someone I have to get to know!

Not only is Victoria fascinating, but the fact that she’s been nearly forgotten motivated me. As a historical fiction author, I’m attracted to the stories of people, especially women, who are in danger of being lost to the pages of history. Bringing those stories to light and making sure their heroines are remembered by future generations is my personal mission. I wanted to help get Victoria’s name back in the history books where it belongs. I also wanted to help people envision her as a living, breathing person in a way you can’t typically do in a historical text. Plus, it doesn’t hurt that she called my hometown of St. Louis, Missouri, home for a while as well – in fact, it is where she met her second husband.

How much research did this book require from you - what was the most interesting aspect of this research?

It usually takes me a good six to eight months to research a historical fiction book. For this one, it mostly took the form of reading every biography of Victoria that I could find, plus scholarly journal articles about her and the impact of her actions. I was lucky enough to find issues of her newspaper, Woodhull & Claflin’s Weekly, online and I have a book of her speeches, so I was able to study her own words as well. In addition, I had to learn about the time period and its customs, the people Victoria interacted with, the suffrage movement and its leaders, and I read a lot of newspaper articles to see how Victoria was perceived by her contemporaries.

There are a lot of unusual things about Victoria, from her upbringing to her family’s antics (things you couldn’t make up) and her unconventional attitudes toward sex, marriage and the role of women. But what most fascinated me is that she was a Spiritualist and believed she had clairvoyant and healing powers. Victoria’s mother encouraged her and her sister Tennie in this belief and her father used these gifts to make money even when the girls were very young. Victoria maintained her whole life that she was guided by the spirits, especially that of the Greek orator Demosthenes, whom she identified as her spirit guide. She claims he predicted her success in New York as well as her candidacy. She said she consulted the spirits regularly and was even President of the national Spiritualist’s association at one point.

How did readers react to this book?

They seem mostly to love it and be fascinated by this chunk of history that no one was taught in school and most people don’t know about. Among the people who don’t like it, some are offended that it includes physical abuse, but I couldn’t leave that out because it was historically part of Victoria’s life. Others think it is overdramatic, but I didn’t need to add any drama to the story; Victoria’s life came jam-packed with it. I even wrote a blog post showing how the events that a lot of people say couldn’t be true really are. I’m proud to say that critics loved the book, it won several awards and has been optioned for TV/film.

There is talk that Madame Presidentess is going to be turned into a movie - tell us more about it.

Yes! I just sold the option to an all-female company called Fortitude International with help of another company called TaleFlick, who put indie authors in touch with Hollywood people for this very purpose. Fortitude is based in LA and have worked with many A-list celebrities. I can’t talk about the specifics what I know of their plans, but they are going to take the book to directors screenwriters, celebrities, producers, etc. who they feel may be interested in adapting the book either into a movie or a TV series. Now we just wait and hope and pray. Hollywood works very slowly, so it may be a while before we have any additional news.

Tell us more about Victoria Woodhull. What makes her tick?

Victoria is interesting because she has opposing motivations at different points in her life. Sometimes she is very selfless, like when she is fighting for women to be treated equally in marriage and society, but other times, she is all about what is best for her, no matter who else she hurts along the way. I really think she wanted to help women – she admitted at one point she didn’t think she would actually win the presidency, but she set herself up as a “representative woman” to bring attention to the issues of women’s rights and female suffrage. Yet, at the same time, she was her parents’ child and not above being underhanded to serve her own interests. She’s certainly no saint (though no one in politics was, if you really look into their life), but she is a good role model because she was so strong and outspoken in a time when women were expected to be subservient. Some of the things she said in the 1870s would still be controversial today.

Victoria Woodhull is not often read about in the history books. Why, do you think that is?

It’s a combination of factors. Victoria didn’t do herself any favors. The press already hated her by the time the election of 1872 rolled around. A few years later, she moved to England and tried to distance herself from her more controversial statements. She actually ended up a bit crazy in her old age. By then, people had linked her name so closely to scandal that no one wanted to remember the trouble she caused or call her a role model. She was pretty much the opposite to most people.

Also, by the mid-1870s, Victoria had turned Susan B. Anthony from one of her strongest supporters into a bitter enemy. (You’ll have to read the book to find out what Victoria did.) This was a huge mistake as posterity is concerned because Susan literally wrote the book on the history of the suffrage movement. It is several thousand pages and multiple volumes, yet she barely mentions Victoria; Susan includes a sentence on Victoria’s newspaper and a few paragraphs on her speech before Congress. There is nothing about her activity in the suffrage movement or her presidential bid. Some people think Susan included so little out of spite, while others say she did it to protect the women’s suffrage movement from being linked to the scandal Victoria caused. Either way, if she wasn’t important enough for Susan to write about, she wasn’t important enough to include in the history books. 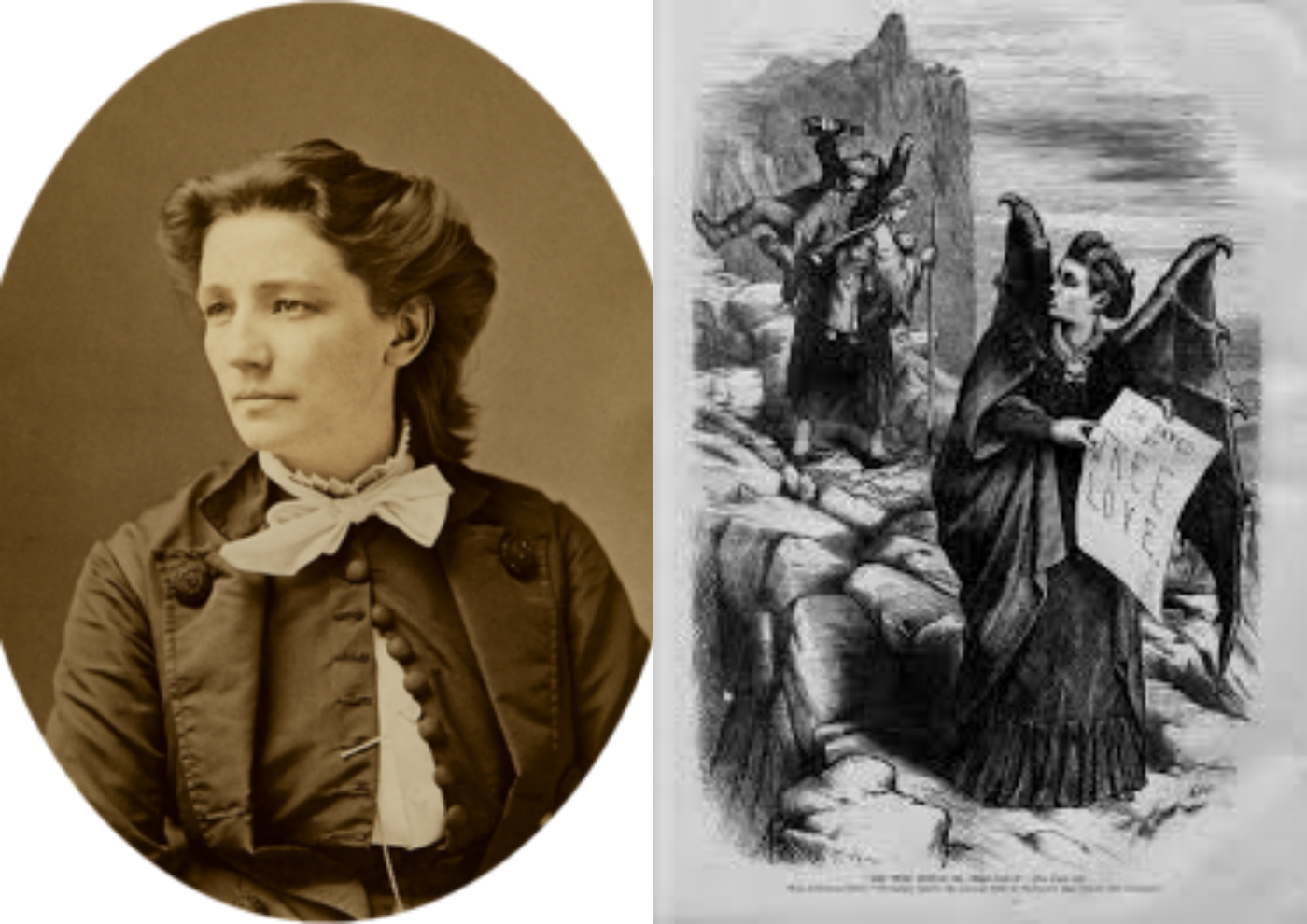 Finally, right after Victoria died, a scathing “biography” called The Terrible Siren was released by a woman named Emanie Nahm Sachs. In it, she portrayed Victoria was a whore and all-around terrible woman. For decades this was considered the official portrayal of Victoria, so no one wanted anything to do with her. Later on, it came out that Ms. Sachs paid her sources for stories and that most of what was in the book was either highly sensationalized or flat out made up. But yet, this picture of Victoria remained.

It wasn’t until the 1970s and 1980s when women began researching Victoria’s life and publishing new biographies that her true story started to come to light. With Hillary Clinton’s 2016 presidential campaign, Victoria’s name is better known than it has been in over 100 years, but yet she still isn’t taught in school and few people know about her.

Oh, most definitely. Anytime you deal with history, you will come upon unpleasant things like abuse, rape, slavery, genocide, etc. I feel that as a historical fiction writer, I have a duty to not ignore these things simply because they are distasteful to modern readers. They are historical fact and we have to understand all aspects of our history if we want to learn from it. However, I also feel like these things shouldn’t be used to titillate or scandalize; they should be portrayed with accuracy and in such a way respects people who have suffered like experiences.

You included very detailed notes at the end of the book. Why?

As a historical fiction writer, I have to keep a balance between being historically accurate and still telling an engaging story. I use the notes at the end of my book to help readers understand how much of what is contained in the novel is true to history versus what I made up. I think this is a very important because I don’t want people to think things are fact when they are not. On the other hand, history is oftentimes stranger than anything an author can imagine, so I also want readers to understand what actually happened – even, and perhaps especially, when it seems far-fetched.

I am working on two non-fiction books about the women’s suffrage movement, as well as a biography of a little-known, but important, suffragist from St. Louis. I’m hoping by the end of 2019 to be working on my next historical fiction novel, which is about an obscure WWII heroine from France.