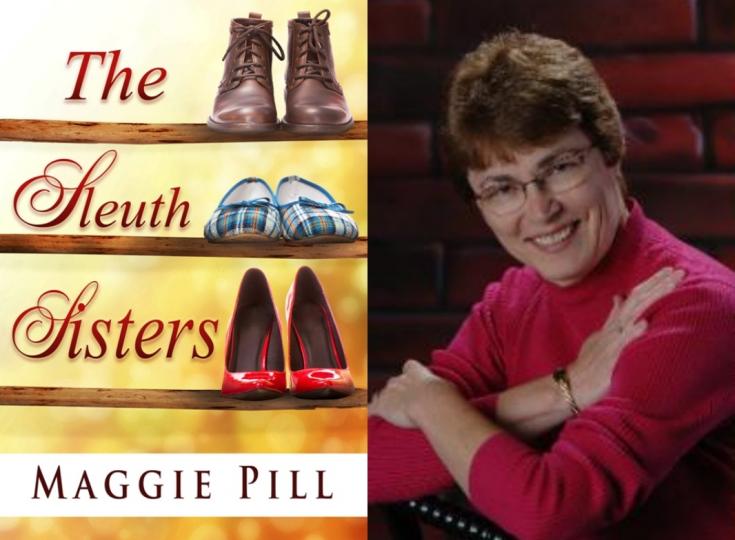 Maggie writes mysteries, loves fine chocolate, cats, and sentences that make her say, "I wish I'd written that." As our Author of the Day, she tells us all about her book, The Sleuth Sisters.

Please give us a short introduction to what The Sleuth Sisters is about.

The Sleuth Sisters begins with two middle-aged women, Barb and Faye, facing a bleak future. Barb retired at fifty from practicing law, and now she’s bored. Faye has been laid off from her job and needs an income. Their solution? Start a detective agency in their small northern Michigan town. They know they’ll face obstacles. They’re women. They’re no longer young. They don’t carry guns or wear trench coats. Worst of all, they have a third sister who will be eager—no, insistent—that she be allowed to be part of the new business. Barb and Faye agree that Retta won’t be included, since she tends to be bossy and manipulative.

What inspired you to write about two middle-aged sisters who open a detective agency?

I’d been wanting to try a cozy mystery since they’re so popular, but I didn’t know if I could combine my usual good mystery plot with the humor a cozy requires. I’d written traditionally published books as myself (Peg Herring) in historical and contemporary mysteries, and they were well-received and even got a few awards. I didn’t want to ruin my reputation as a writer if my humorous attempt fell flat, so I took my grandmother’s name, Margaret Pillsbury, shortened it to Maggie Pill, and published The Sleuth Sisters myself.

I have two sisters, so the trio came naturally. Readers often tell me which sister they think they are. “I’m Barb. I like things organized,” or “I’m Faye. I want everyone to get along,” or “I’m Retta. I boss my sisters around and they just roll their eyes at me.”

The idea of the characters starting a detective agency made it easy to create mysteries to solve, and while my “cozy private eyes” aren’t strictly amateurs, they aren’t Sam Spade by a long shot.

Why did you pick Allport, a small town in northern Lower Michigan as the backdrop for your story?

I live in northern Lower Michigan, often called “the tip of the mitt,” and it’s a perfect setting for a cozy series. I invented a county and squashed two towns (Rogers City and Alpena) together into Allport, so I could do as I liked with police departments, businesses, and physical locations. Because I’m not thrilled with stories where cops are the bad guys, the new local police chief is a good man, and he’s single as well, which creates additional tension between Barb and Retta.

Tell us more about Barb and Faye. What makes them so special?

Barb spent her life as a professional in the world outside Allport. She’s a law-abiding citizen with one exception: She can’t stand grammatical mistakes in public announcements. As a result, she’s a Grammar Ninja, sneaking around at night to correct errors and sending anonymous letters that point out the need for proofreading. Faye has spent her life in Allport, never achieving financial stability, mostly due to her husband’s traumatic brain injury. She cares deeply for others, whether they’re people or animals. Despite their different outlooks, Faye and Barb are close, finishing each other’s sentences and tending to know exactly what the other is thinking.

Retta is the youngest and cutest sister, who’s always been able to get what she wants just by smiling and asking. Her life was magical until her husband, a state police officer, was killed in the line of duty. Now she’s looking for ways to make life interesting—and what could be more fun than being a private detective?

Each sister has contributions to make, and I think that’s what readers like about the series. Barb is the “brains” of the outfit, knowing the law, and applying reason to every situation. Faye is the organizer, good with a computer, and experienced with research and record-keeping. Retta is often the troublemaker, because she does everything her own way, but she’s also braver than her sisters. When it’s time for action, Retta is your girl.

I spent thirty years as a teacher, so I have many mini-specialties. I set the stage on fire during our production of The Wizard of Oz. With the help of creative teens, I can make a hay wagon into a float in less than two days. And if you ever need a quiz on the figurative language in Shakespeare’s sonnets, just let me know. 😊 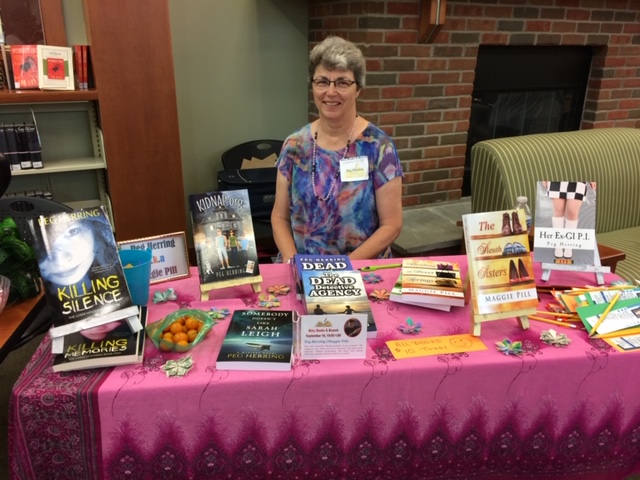 Why murder mystery? What drew you to the genre?

I started reading mysteries as a kid, probably because that’s what we had lying around the house. I like the puzzle and my chance to match wits with the sleuth. I like the scenarios of ordinary people thrown into extraordinary circumstances. And I like the justice that comes at the end of the story: the bad are caught and punished, the good, though perhaps damaged, go forward knowing they did their best.

The Sleuth Sisters was written as a standalone. (If I’d known how popular it would be, I’d have included animals right from the first, since the dogs become rock stars in later books.) As I said above, I wasn’t sure I could write a humorous mystery. When I finished, I thought I’d done all right, so I released it as an e-book, thinking that would be the end of it. Maggie Pill had no big publisher to help her get reviews and publicity, no fan base, and no expectation the book would be a hit.

A few months after the book came out, someone wrote to ask if I’d please make a print version so she could buy it as a Christmas gift for a non-techie relative. I took a deep breath and learned how to do that. A while later, someone asked if it would ever be an audio book. I investigated that and was lucky enough to catch the attention of Cerny Studios in Chicago. The owner’s wife had read the book and loved it, so he took on the job of finding three talented actresses to read as Barb, Faye, and Retta. Boom! We had audio, print, and e-formats. Then came the requests for more adventures for Barb and Faye. As many expected, Retta got her way in later books and became part of the Smart Detective Agency’s business.

Retta is the most difficult to write, because she’s kind of a brat, yet readers need to like her and appreciate what she contributes to the stories. Retta’s saving grace is that she really believes she’s being helpful when she manipulates those around her. Each sister gets a chance to narrate from her point of view, a chapter at a time, so readers see their strengths and weaknesses. (Note: I thought I was most like Barb until a reader wrote to say, “I can’t stand Barb. She’s so judgmental and cold.” Oh. Well, maybe I’m a little like Faye and Retta too.)

The book contains a lot of humor - why do you take this approach?

Situations with sisters are perfect opportunities for humor. We love our sisters. We’d like to strangle our sisters. We need our sisters. We often relate to them more than to anyone else due to shared history, yet we aren’t the same. With plenty of scenarios for them to get into trouble, disagree on how to get out, and work together in the end, I ended up with seven Sleuth Sisters books. One of my sisters died in 2019, which killed the joy of writing the series, so I ended it there.

I am a morning person times ten. If I’m not at work by six a.m., it’s a very odd day. I usually stop around lunch time, and after that my storytelling ability is severely limited. I can edit, but creativity is gone.

My biggest problem is writing fight scenes, since I’ve never even been close to a physical confrontation. I sometimes get out of my chair and try to act out what has to happen on both sides: “What would A do, and how would B react?” It would look really strange if anyone could see me, so it’s a good thing I live in the woods. 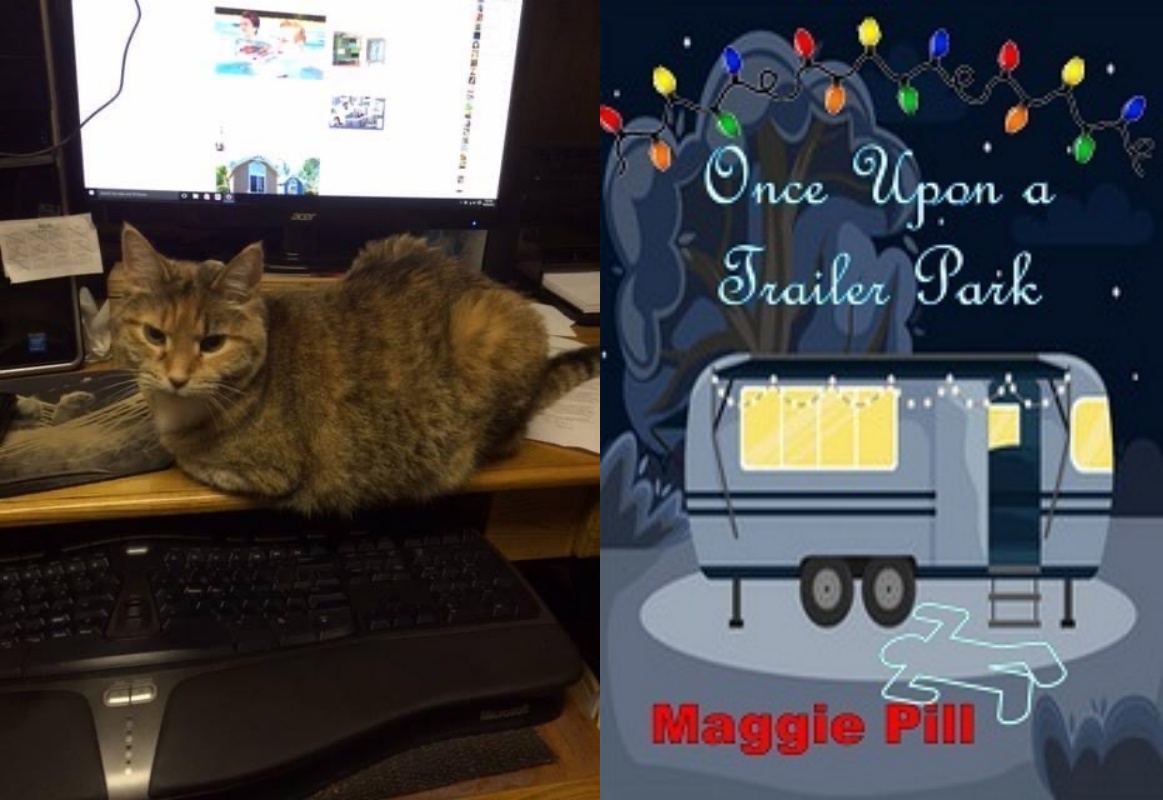 Maggie has a new series called Trailer Park Tales, with two books available, Once Upon a Trailer Park and Twice the Crime This Time. Taking the same humor idea I’d used with siblings, “love ’em, can’t live with ’em, not allowed to kill ’em,” I applied it to spouses. People living in a Florida RV park solve murders as they deal with the differences of opinion all couples have. It’s been fun, because actual couples provide material for the marital spats. Who knew you could argue for months about which refrigerator shelf pickles should be stored on?

Maggie’s website/blog is https://maggiepill.maggiepillmysteries.com/
Check out Peg’s books too at http://www.pegherring.com
We’re on Facebook too: https://www.facebook.com/maggie.pill
You can buy all my books on various sites (Amazon, B&N, Apple, Google, Kobo, etc.) or order them from any bookstore. 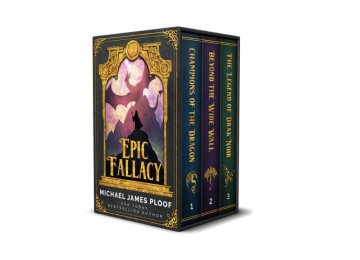 Michael James Ploof - A Satirical High-Adventure Romp Through the Fantasy Genre
FEATURED AUTHOR - Michael Ploof spent his youth in the land of make-believe. School was a bore, and growing up in the "Boonies" without cable television forced him to use his imagination. If he wasn't holed up in his bedroom playing with his vast collection of action figures, he could be found in the forest with a wooden sword or staff in hand, battling the forces of evil. As an 80's kid, he was raised on a healthy diet of movies like Star Wars, The Neverending Story, Labyrinth, Goonies, and endless other… Read more