Mainak Dhar - A Sniper in a Mumbai Mall

Mainak Dhar - A Sniper in a Mumbai Mall
Posted on 3rd of August, 2020 by Naomi Bolton 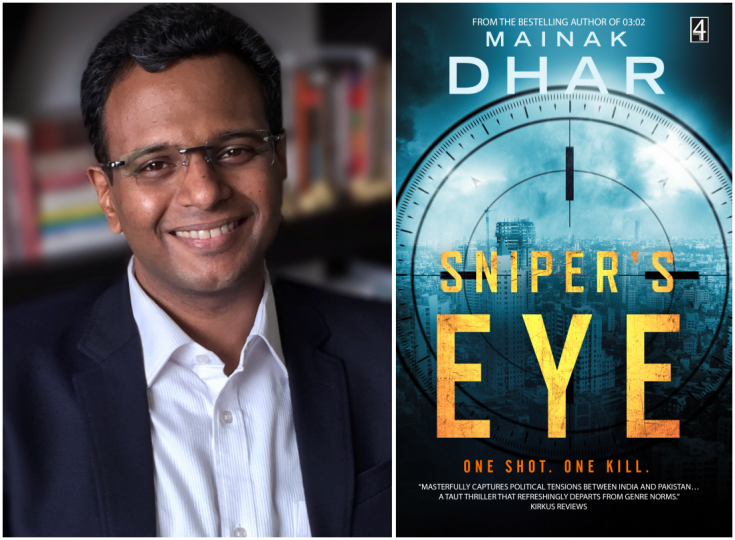 Mainak Dhar wears many hats. He considers his most important job to be the best possible father and husband he can be. An alumnus of the Indian Institute of Management, Ahmedabad, his 'day job' is in a leadership role with a major multinational firm. A self-described 'cubicle dweller by day and writer by night', when he's not with his family or at work, he loves creating and sharing stories. He is the author of over a dozen books, some of which have been bestsellers in India and abroad including the bestselling Alice in Deadland series, 03:02, and Sniper's Eye. His books have been translated into Turkish, Vietnamese, Japanese, French, German and Portuguese, reaching millions of readers worldwide. He is also a passionate student of Karate, and holds a Black Belt. Learn more about him and contact him at mainakdhar.com. As our Author of the Day, he tells us all about his book, Sniper's Eye.

Sniper’s Eye is a thriller about a former Army Special Forces Major who has been trying to put the demons of his past behind him and live an ordinary life in Mumbai. On a date with his girlfriend in a mall, the man in front of them is shot, and he is thrust into the middle of a terror attack, which brings to the open his past, puts him on a terror kill list, and puts him and his loved ones in danger. As he is sucked in deeper, he has to become the man he once was and confront his past. He also learns that things aren’t quite as they seem and that there is a deeper conspiracy at play which he must unravel if he is to save himself and those he cares about. To do so, he has to learn to work with the sniper- a man who has sworn to kill him!

What inspired you to write about a sniper in a Mumbai mall?

The inspiration for Sniper’s Eye came from the world around us, where we see conflicts in many parts of the world, where mostly young people are fighting and killing themselves in the name of religion or patriotism, without really thinking of whose purposes they are serving. Sniper’s Eye tries to put two individuals together, who on the face of it are enemies, and get them to discover that perhaps they need to work together to fight those who are actually creating the conflicts in which they and their loved ones are mere pawns. As I write in the book, we live in a world where the young and poor fight and die in wars started by the old and rich. 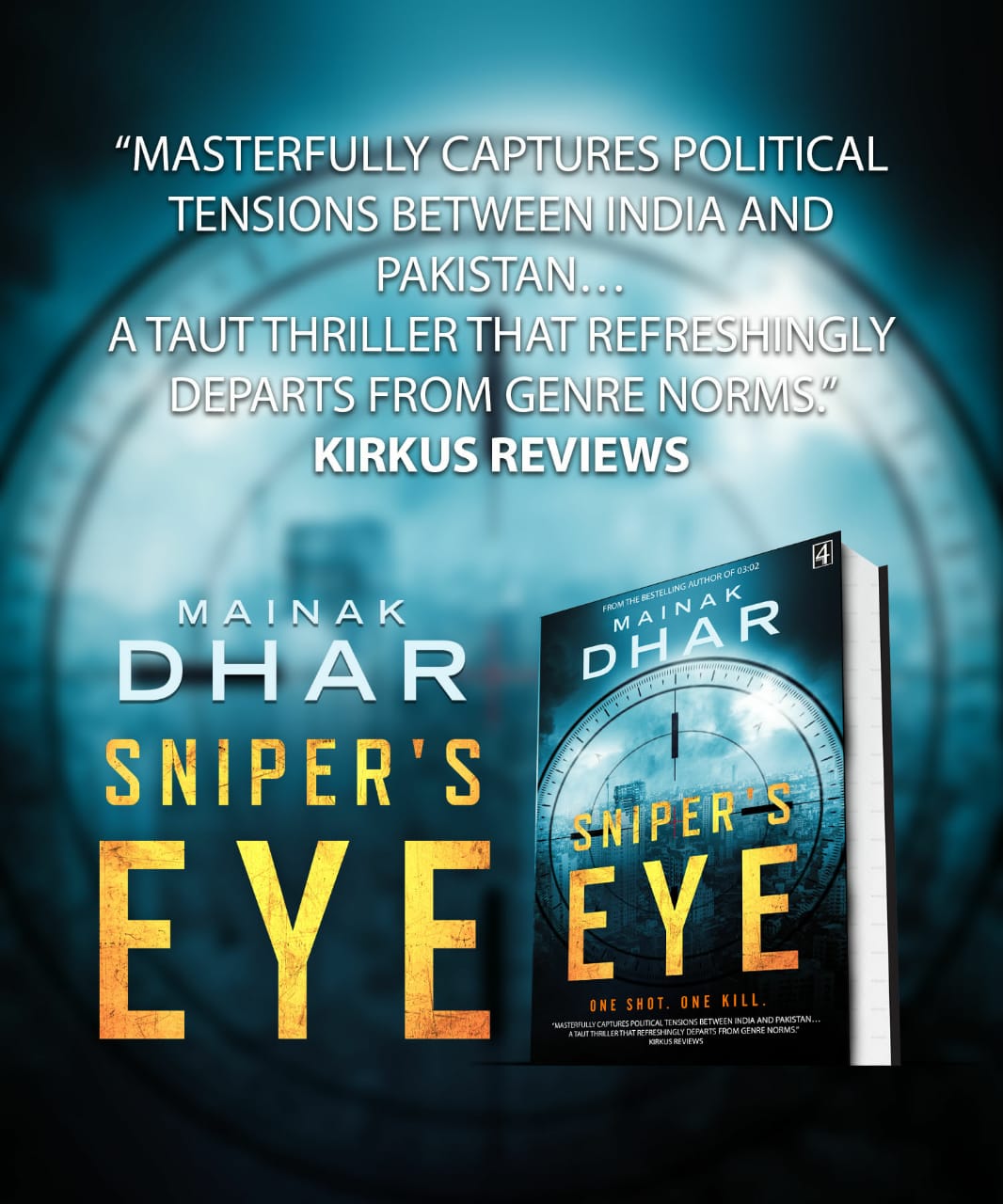 How does your own martial arts experience influence your writing?

The one area where it perhaps unsurprisingly comes into play is in writing action. I’ve learned Karate for over ten years and hold a Black Belt, and I tap into that to try and make the action as realistic as possible. Real fights aren’t like what they show in most movies, and injecting little nuances of realism into the action scenes is one of the ways in which I try and engage and entertain readers.

I have no secret skills! I’m just an ordinary guy, trying to do the best he can in all the roles he has to play. The most important role I play is to be the best husband and father I can be for my family. So, I try and spend as much time with my family as I can. I have a full-time job in the corporate sector, and that takes up a lot of my time and energy. Outside of family, my job, and my writing, I do try and keep myself in shape and I run every day, am also a keen student and practitioner of Karate, and hold a Black Belt.

Tell us more about Aaditya Ghosh.  What makes him so special?

First of all, Aaditya is my twelve-year-old son’s name- so that’s the most special thing about him! On a more serious note, what I find interesting about him is that he is faced with a dilemma many of us are- the gap between the person we are trying to become to fit in and conform to the world around us and the person we truly are. So while his background is very special and his circumstances extreme, he should resonate with readers worldwide. He was a highly decorated Special Forces officer who was forced to leave the Army in a cloud of controversy after his political masters failed to back him up after a raid. He distrusts the system but finds that his instinct makes him want to protect those around him. He’s trying hard to adjust to being an office-dwelling employee, but his instinct tells him he’s still a soldier at heart. He is still faced with the demons of his past, waking up at night with memories of men he’s killed, but his instinct still makes him put himself in harm’s way when the innocent are threatened. Sniper’s Eye is in many ways his journey of discovery of who he really is and embracing that.

Readers say that it felt like watching a film - how did you pull this off?

I am a very ‘visual’ writer. When I’m writing, I’m imagining things playing out in front of me, as if I were seeing it happen in real life around me. It sounds a bit embarrassing, but I’ve been caught on occasion by my wife while we were out shopping or enjoying a meal when I’d zone out, lost in imagining what would happen if an attack came from a certain direction or how the protagonist would deal with a threat in that environment. We were actually walking in the same mall on our way to a movie when I came up with the opening scene, down to seeing the location where the shot would come from. Many readers have told me that they would love to see Sniper’s Eye on screen and am excited that Reliance Entertainment (a major entertainment company in India and known to US audiences through blockbuster movies like 1917) has picked up Sniper’s Eye to develop into a web-series.

Which character in this book was the most challenging to create?

That would be Aman Karzai, the sniper. On the face of it, he is a ruthless killer, and a terrorist by many people’s definition. Yet, he has a story of his own, and his actions are driven by certain factors which lead him to believe his is a righteous mission of vengeance. In creating such a character, the challenge is to bring to life all the shades of grey that go into such a person, to make the reader not just simplistically like or dislike him, but to understand him and his motivations.

Do you have any interesting writing habits.  What is an average writing day like for you?

With a demanding, full-time job and a family I love to (and want to) spend quality time with, it's critical that I have a routine to fit my writing in with the rest of my life. I ideate while I run in the morning and write 20-30 minutes every morning after my run. It helps that I wake up very early (5 AM)- so by the time I need to be ready for my ‘day job’, I’ve got my ‘me time’ in (fitness and writing) without taking away from the time I need to devote to my family and work. Also, I do a fair bit of traveling as part of my job, and I get a lot of writing done in concentrated bursts on flights, hotels, and airports whenever I travel.

Of course, that was when things were ‘normal’. Like with so many other aspects of our lives, COVID-19 has turned all of that upside down. Mumbai, where we live, is under lockdown so no going to the office but working from home, our son is doing school online, I can’t go to the gym to run and of course, there’s no business travel. So, we’ve all had to adapt, and I’m still trying to stay disciplined and consistent. I’m running indoors and continuing to write every day.

As I mentioned, the sequel to Sniper’s Eye just got released. I took a bit of a break after that and then got to work on Sniper’s Quest, the third book in the series. The first draft of that is now done, and it should be released sometime in 2021.