Mainak Dhar - Alice, Zombies and Destiny
Posted on 3rd of May, 2020 by Naomi Bolton 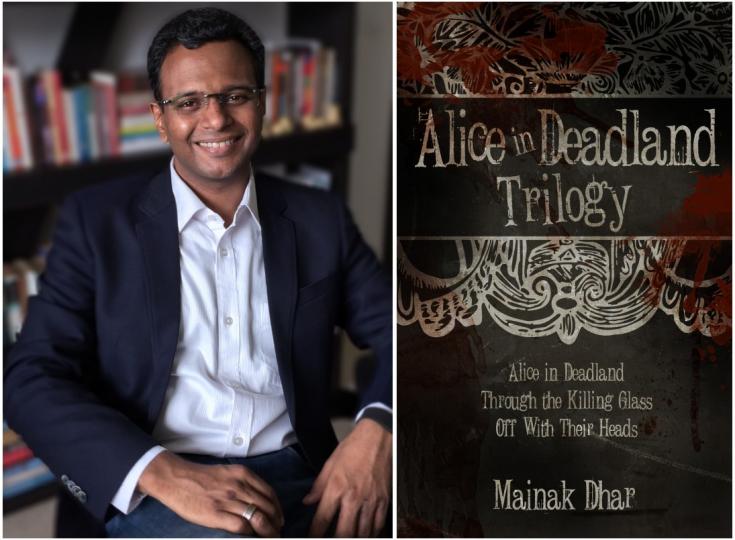 Mainak Dhar wears many hats. He considers his most important job to be the best possible father and husband he can be. An alumnus of the Indian Institute of Management, Ahmedabad, his 'day job' is with a major multinational firm, leading its businesses for the Asia, Middle East & Africa region. A self-described 'cubicle dweller by day and writer by night', when he's not with his family or at work, he loves creating and sharing stories. He is the author of over a dozen books, some of which have been bestsellers in India and abroad including the bestselling Alice in Deadland series, 03:02 and Sniper's Eye. His books have been translated into Turkish, Vietnamese, Japanese, French, German and Portuguese, reaching millions of readers worldwide. He is also a passionate student of Karate, and holds a Black Belt. As our Author of the Day, he tells us all about his Alice in Deadland trilogy.

Please give us a short introduction to what Alice in Deadland Trilogy is about.

The series (which has a total of eight books) is about a fifteen-year-old girl called Alice who was born just after The Rising, a series of events that destroyed civilization as we know it, and left the human survivors at the mercy of seemingly undead 'Biters' and the mercenary forces of Zeus serving their shadowy masters. Alice grew up believing the 'accepted' story that the Biters were inhuman, irrational monsters, and that humans were engaged in a 'war on terror' against them. As she follows a rabbit-eared Biter down a hole and learns more about them and what truly led to The Rising, she discovers a massive conspiracy at the heart of it, which challenges her notions of who the 'good guys' really are, and leads her to discover her destiny through a series of exciting adventures. At one level, it is a tale of adventure, but at another level, I hope it gives some food for thought on the nature of freedom and liberty, especially in the times we live in today.

Is there a deeper message to the story?

I think people are nowadays acutely aware of how we are screwing up our world- with pollution, overpopulation, economic mismanagement and now, of course, the COVID-19 Pandemic we’re all living through. As a result, I think people are concerned with what may happen if society as we take for granted breaks down- hence the fascination with dystopian fiction. Zombies are a manifestation of that, a seemingly unbeatable foe determined to end human civilization as we know it. I also use zombies as a metaphor for how we ourselves are the biggest threat to our world. In Alice in Deadland and Zombeistan, the zombies (or Biters, as I call them) are the direct result of what people do in their quest for power.

Alice in Deadland is set fifteen years after the end of civilization as we know it. Why this timeframe?

Part of the reason for this was to give some time for the new world to ‘settle’, for the old cities and societies to truly become what they are known as- the Deadland. Setting the story too soon after The Rising would have meant focusing on the transition versus setting the story at a time when the new reality is broadly accepted. The timing also allowed Alice to grow to an age where she could question what she sees around her and also become a plausible heroine for the story that unfolds.

Tell us more about your undead Biters. How do they differ from regular zombies?

I wouldn’t want to provide any spoilers and would love for readers to discover for themselves! But, here’s a hint- they aren’t quite the mindless monsters Alice has been taught to believe.

Why did you decide to add a prophecy to the mix?

For me, it was less about the prophecy and more about how so many threads in the story are inter-linked. Readers who read the trilogy will see, especially in the third book in the series, how so many of the characters crossed paths, and their journeys were fated to be what they were, even if they didn’t realize it at that time.

I have no secret skills. I’m just an ordinary guy trying to be the best possible husband and father I can be, and trying to make a positive impact to those around me.

Book II starts two years after the previous one and features the Red Queen. Tell us more about her.

The Red Queen is Alice’s most dangerous enemy- someone who has her skills and unique abilities but has been created to destroy, not to protect. In many ways, she is the mirror image of Alice, and to me, she is not just a physical character, but a manifestation of the fact that the same powers and talents can be used for good or evil, and that being a hero and a villain are often two sides of the same coin.

Why did you create Book III as a prequel?

Book III really came about as a result of overwhelming reader feedback wanting to know more about what had happened before and during The Rising and what some of the characters they got to meet in the first two books were doing at that time. It was a lot of fun to create those ‘backstories’.

Give us three "Good to Know" facts about you.

- I’m basically a family man and like spending as much time as possible with my wife and eleven-year-old son.

- My ‘day job’ is in the corporate world and has been working for more than two decades in the world of business, handling boardrooms and brands. Writing helps me keeps my mind fresh and think out of the box, and avoid becoming a corporate zombie!

- Other than family, work, and writing, I love having some time for my own fitness. I run every day and am a Black Belt in Karate.

Cherish the relationships you have, especially your parents- they won’t always be there.

With a demanding, full-time job and a family I love to (and want to) spend quality time with, it's critical that I have a routine to fit my writing in with the rest of my life. I ideate while I run in the morning for an hour and a half, write 30-45 minutes every day, and do a concentrated burst of writing on flights, hotels, and airports whenever I travel on work.

The second book in my 7even Series of thrillers (Sniper’s Debt) just got published and now I’m working on the third book in the series.