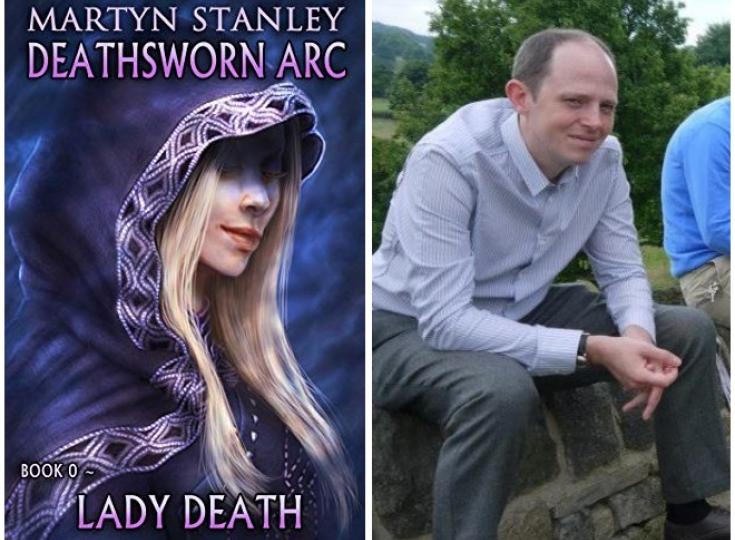 Martyn Stanley is the author of 'The Deathsworn Arc' an epic fantasy adventure series with dragons. He lives in a little village in England, with his long-suffering wife and two children.  Martyn has always enjoyed epic fantasy novels and began reading them at a young age, starting with 'The Hobbit', ending with 'The Inheritance Cycle' and including everything in between. His 'Deathsworn Arc' is more than a hack and slash, swords and sorcery series. It examines, faith, companionship, morality, pragmatism and more. If the characters of 'The Deathsworn Arc' come across as strange, it's partly because they're intended to be. It isn't a series which will be dragged out indefinitely, it has a beginning, a middle and a definite end.

Please give us a short introduction to what Lady Death is about.

Lady Death is an assassin with supernatural abilities. She's a long-lived character and is almost legendary in the city of Cormaroth. Lady Death was actually written after the 5th book in the Deathsworn Arc series. I could see Vashni had changed over the course of the series. She's developed a lot as a character. I always knew she wasn't being open and honest with the companions during 'The Last Dragon Slayer' (the first book). So I wanted to go back a little further and answer the question of who she really was, prior to joining the companions. I also really wanted to make it clear, Vashni running into Brael Truthseeker and the Companions wasn't an accident.

What inspired you to write the Deathsworn Series?

The Deathsworn Arc series is really about 'The Truth'. The core of the story, around which everything revolves is the 'Truth' which Brael has discovered and brought to the world. It's really a thought experiment into how a person proving unequivocally that religion is a lie and there is no god would affect society. I'm not saying this is true, but I'm asking the question, 'What if?' Of course, as in all good stories you have to make the big story small and the small story big. So it's also about Korhan's quest to become a great warrior and his infatuation with Vashni which he fears will never be reciprocated. It's about Saul's regrets and lost relationship with the Empress. It's about Votrex's desire to enter his home and discover what happened to his family. Of course, it's also about Vashni. Who she is, why she's the way she is. She's incredibly long-lived and is a person stuck between cultures. She's an elf, but unlike most elves, she's spent centuries living amongst humans.

Tell us more about Vashni. What makes her tick?

When we first met Vashni in 'The Last Dragon Slayer' she was a loner, mistrusting of humans and hostile to pretty much everyone. She continually tries to portray herself as invincible, but this is a facade. It's a defense mechanism really. She DOES have extraordinary abilities, but she's not invulnerable. Over the course of the Deathsworn Arc, she slowly begins to trust and even 'like' the rest of the Companions. Vashni has a long, long history though. Many years before the Deathsworn Arc is set, she was consort to the Emperor of Cormaroth. She was also a legendary arena fighter and long before that a roving adventurer. Before she met the Emperor her life companion was an Elf called Hal. Eventually, she will learn what happened to happened Hal and why he disappeared over 500 years ago, this whole story arc is linked to Korhan's elvish great sword - Harbinger. There's a big change coming in book 6. Of course, we get to see a different side to Vashni in book 5 when she spends almost the entire book in the domain of elves. I think book 5 highlights how because she's spent so much time around humans she's no longer like the typical elf.

Why did you decide to explore Vashni's story further?

I think the seed of an idea came when I wrote 'The Blood Queen' and in a scene where she was on the battlements talking to Votrex - she explained why was in Trest in book 1. From that point, I wanted to explore the run-up to Vashni meeting the companions. It was almost as if I'd realized I'd started the story at the wrong point. I also thought my writing and story-telling had improved over the years, so I wanted to try and write a more compelling run-in to the series and I think I succeeded in this. Vashni is also a reader favorite and I wanted to write more of her story for my fans.

How does Lady Death tie in with the other books in the series?

I haven't done it for years, but I hold a 2nd degree black belt in Taekwondo. I'm also a pretty decent Chess player. My son started getting into chess a couple of years ago and in 2019 he became the Staffordshire Under 9's County Chess Champion. For a while now I've had to start trying to learn chess theory to keep up, so I can still give him a game! He's something of an anomaly though, he's been doing 16+ Lego sets since he was 5, is working towards his Grade 3 in Piano and does high-school level maths. I don't know where he gets his cleverness from, but it certainly isn't me! Besides writing fiction I also dabble in journalism and humor. I was listed in the top 10 articles of 2018 on the DriveTribe platform and won the DriveTribe Article of the year 2017. I'm also a gamer. My Xbox Gamertag is Smokemare and I have over 30,000 gamer points. I've mainly been playing Resident Evil 2: Remake lately, but I'm always playing something if I have the time. I also built my own house about a decade ago, with the help of my father-in-law. I dabble in music too. In the early noughties, I played lead guitar for a band called 'The Liability Crisis'. These days I mainly strum an acoustic guitar or mess around on the piano.

That's a tough question. The Deathsworn Arc characters have become so ingrained now that I know instinctively how they'll react in any situation. The toughest but most satisfying to write a character I've written lately is a child vampire called Ofelia who is the protagonist in a story I'm seeking representation from an agent with. She's long-lived, but she looks like an eleven-year-old. She presented many similar challenges to Vashni, but because the story is set in our world I did a lot of work to tie her story into historical events and I wanted that to be accurate.

Always. This is why I don't tend to shout about my books to people I know. A novel is a window into someone's soul. You can't write a 60,000 word + story without leaving a little piece of yourself inside it. I think that's why we write. Yes, we want to tell a story. But in telling that story we are often asking ourselves a question and trying to answer it. The Deathsworn Arc's wrestle with religion and faith is very metaphorical for my own pragmatic but existential grapple with faith and religion.

Definitely. I don't think anyone writes by choice. It's a bizarre compulsion. It's hard work and it's often painful, particularly when you get negative feedback or low sales. You carry on though because there's something inside you which you simply have to get out. Writing can be cathartic. It's a window into your soul, so sometimes reading what you've written can help you understand yourself.

Really tough question. I'd spend a day with many of my characters. Particularly Ofelia, the child vampire from my forthcoming novel. Or Vashni, or even Vexis. But who would I really spend a day with? Hmmm, I'd be torn between Brael Truthseeker, simply to learn and discuss science, magic and the nature of reality or Fox Fletcher - to explore. That might seem an odd choice, but I'm writing Deathsworn Arc 6 now, and Fox isn't all she seems. It transpires that she's not actually 100% human and that she's at least half 'Traveller' a race of human-appearing people but who can travel into alternate dimensions on a whim. I'd love to see other worlds and realities. I don't know if the multiverse exists, but I think it's impossible to prove it doesn't.

Once you've established a character, you have to let them be themselves or have a damn good reason for them not to be. There comes a point where you are no longer writing a character, but writing scenarios you dreamt up, then just writing how you KNOW your characters would react.

If I finish a Deathsworn Arc book, I start writing the next one. The first chapter is the foundation upon which a story is built. When I start any book, I always begin by just writing as much as I can before I get confused. Then I read it back, edit it. Maybe write a little plan of what we've got and where we need to go. I tend to at that point decide how it's going to end and start slowing filling in the gaps, trying to navigate a pathway through the narrative.

I'm hoping to get 'Ofelia' published traditionally. It's a totally new take on the vampire genre with new lore and an almost sci-fi/fantasy hybrid thing going on. I really think if it got out there it could be big. I'm currently still working on Deathsworn Arc 6: Emergence. It's well overdue, but it's a complex book and I really want it to be 100% right, so I'm taking my time with it. Once that's done, I intend to start a new non-Deathsworn Arc story also set in Torea called 'Fury of the Storm' it's about a girl called Feurette who learns she has the ability to control the weather. It's quite a dark tale and I haven't really nailed down the plot yet. I know how it starts and how it ends and I know I really have to write it!

You can find me on pretty much any social media platform. Some I interact with more than others. I would say if you enjoy the Deathsworn Arc keep an eye out on Amazon. I regularly make my Lambton Worm stories free on Amazon and they're well worth picking up if you get the chance. Here are some of my social media identities: