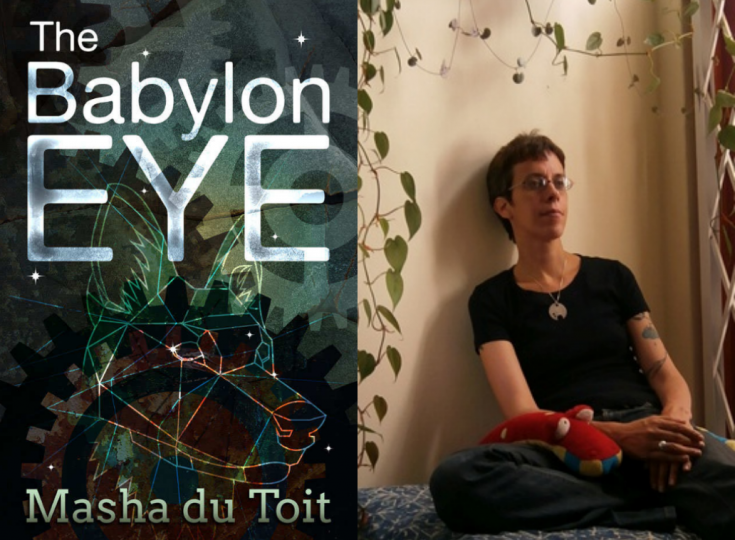 Masha du Toit is an artist and writer. She reads far too much, draws pictures that tell stories and writes stories about every-day magic. As our Author of the Day, Du Toit tels us all about her book, The Babylon Eye

Please give us a short introduction to what The Babylon Eye is about.

The Babylon Eye is a science fiction novel. The heroine, Elke Veraart, is looking for a lost cyber-dog. If she can find the dog she won't have to go back to prison, but her search uncovers some dangerous secrets and Elke has to choose between her own freedom and the life of the dog.

While I was still planning this story my beloved dog Anna, a beautiful white shepherd, died. At that stage I hadn't found the emotional centre of the story yet. Everything came together when I decided to make one of the central characters a dog.  Meisje, the white cyber-dog in The Babylon Eye is a rather idealised version of Anna. Meisje is a lot more obedient than Anna ever was, but she has the same independent spirit and intelligence.

Tell us more about Elke Veraart and Meisje  what makes them so special?

Both Elke and Meisje (the cyber-dog) are alone in a rather harsh world. They are both tough as well as vulnerable and both of them are in danger. Elke has a dark and violent past. She used to be an eco-terrorist, hunting  poachers that kill endangered animals and she's done some things she regrets. Now she's trying to live a law-abiding life but is struggling to find her way. Meisje is a cybernetically enhanced killing machine but she's also a highly intelligent, sensitive, and loyal dog. She's lost the owner that she loved and she's hungry, lonely, and bewildered. Elke and Meisje start off on opposite sides, but  they learn that the they have a lot in common and that they need one another to survive.

What inspired you to write about an eco-terrorist and a cybernetically enhanced dog?

It's impossible to look at the news these days without seeing yet another story of ecological disaster, of the many ways humans are destroying the planet or hurting other living beings. I wanted to create a heroine who was willing to act, to get her hands dirty, to do whatever it took to protect the natural world. That's where the eco-terrorist came from. I also like exploring the divisions between nature and technology. Both Elke and Meisje have been enhanced with human technology built into their bodies. How does that change you? What effect does it have, to be partly animal, and partly mechanical? These are some of the questions I explored in this story.

What is The Babylon Eye?

The stakes are high in this book - Elke is fighting for her freedom, Meisje for her life.  Why did you take this approach?

I love stories that make me care about the characters so much that I can't stop reading. I want to know what happens!  That sense of expectation and excitement is what I try to create in my own writing, and one way to achieve that is to turn up the heat so that it is difficult to imagine how everything might still turn out to be okay, but without losing the hope of a happy ending.

I make mosaics, as well as puppets and embroidery. I was trained as a visual artist, and I find it relaxing to make things out of clay, fabric, and thread.

Readers say this book was fast-paced and hard to put down. How did you pull this off?

I try my best to create characters that readers can relate to and care about. Then, if those characters are placed in a challenging situation the story becomes both entertaining and meaningful. It doesn't always have to be about violence of physical danger either. Some of the most gripping stories are about an emotional or psychological dilemma. A misunderstanding between friends, or a character being unjustly accused can make you want to keep reading right to the end of the story. It's also important to me that my stories are never cynical, and retain that sense of wonder and delight that makes reading such a special experience.

Why did you decide to write this from different POVs?

This story is told from two points of view, a human's and a dog's. Elke's story, as she searches for Meisje, and Meisje's story, as she tries to evade capture. Writing from a dog's point of view was an intriguing challenge. I wanted to see if I could bring across the very different way in which a dog would view the world. Meisje can't talk, but she can understand human language, and she pays attention to different things than a human character might. Her sense of smell is very important, and body language and tone of voice can mean more to her than spoken words.

How does this book tie in with the other books in this series? Can The Babylon Eye be read as a standalone?

The Babylon Eye is the first of a three book series, but it can definitely be read as a standalone. The other books, The Real and The Strange are also about Elke and Meisje, but they go on new adventures, and face different challenges.

What inspires you to write?

Writing is like an immensely entertaining game that I can't ever win, but I want to keep playing. Like an infinite puzzle that keeps growing more complex and surprising. I  love making up characters and having them come alive and do unexpected things I never really planned for them. Writing can be hard work, especially the final stages of editing and proofing, but the ultimate reward is having somebody tell me that they got lost in my story, or couldn't stop reading until three in the morning. That's what it's all about.

I'm starting a whole new series with completely new characters. Everything is still in the planning stages but it will probably be a young adult series set in outer space, with a strong element of fantasy. I'm still in the research phase, and at the moment I'm trying to understand  the implications of faster than light travel and time dilation. It's mind-bending stuff!

Where can our readers discover more of your work  or interact with you?

All my books are on Amazon at https://www.amazon.com/Masha-du-Toit/e/B005CQ8IJ2/  I blog at mashadutoit.com, and my website is at masha.co.za.  You can interact with me on twitter @mashadutoit and my facebook page is at  https://www.facebook.com/mashadutoitbooks/