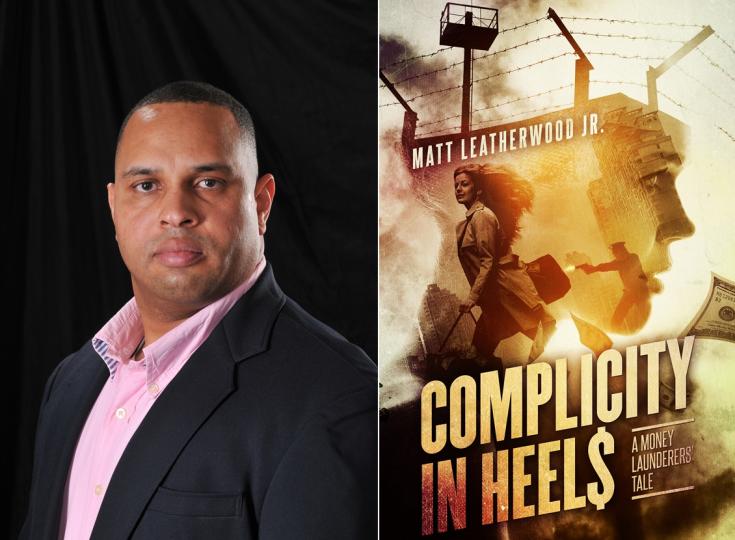 Matt Leatherwood Jr. enjoys taking complicated themes and simplifying it in a fast-paced story. During a writing course, Leatherwood received a photo of an attractive woman with the task to create her backstory. This lead to the birth of Nikki Frank, the main character of Complicity in Heels. As our Author of the Day, Leatherwood chats about who Nikki really is, how his experiences as a U.S. Marine shaped his writing and reveals why he wrote about money laundering.

Please give us a short introduction to what Complicity in Heels is about.

Complicity in Heels is about a woman who has just been released from prison and is trying to put her life back together. Things quickly come to a head when her past and present circumstances collide. Her former criminal associate wants her to take on one last job for the cartel, but all she cares about is looking after her disabled brother.

Tell us a bit more about Nikki Frank. How was her character conceived in your mind?

Nikki Frank is youngest child of the late Nancy Grey (nee) and Thomas Frank. Both of her parents are deceased. She now has conservatorship over her older brother Marty, who has Down syndrome. She is torn between family and profession.

Nikki was conceived from a photo of an attractive woman modeling pearls in a formal white dress. That image was taken and given a general backstory for the novel writing course I was undertaking at the time with Winghill Writing School. Over the course of five years (2010-2015), Nikki continued to evolve until I completed the final manuscript for Complicity in Heels in 2016.

How has your experiences as a U.S. Marine influenced your writing?

The U.S. Marine Corps brings together a diverse group of talented men and women from different backgrounds, cultures, and races to work together for the sole purpose of defending the nation. With such a broad group of people to work and interact with on a daily basis, I tend to take complicated subject matter and simplify it while maintaining a fast pace. Of course being a former Marine, I’m going to keep you on edge, not knowing what to expect.

What inspired you to involve your main character in a money brokering scheme?

An intriguing thought. The impetus for Complicity in Heels was a bad 80’s crime drama in which a big monetary exchange was the climax. During the final meeting for “The Big Deal”, the antagonist shows up with a briefcase that looked like my nephew’s school lunch box. I kept thinking, “There is no way a million dollars can fit in that.” That episodic scene launched me into researching criminal monetary exchanges and how they are conducted.  Armed with this knowledge I was able to give birth to my present novel.

Tell us more about the book's title. Why "Complicity in Heels"?

The initial title for my book was Complicit Ties. I settled on that name because of the web of multiple connections between characters and the intricate storyline. When I finished the manuscript, I shopped it over to Larry Brooks (http://storyfix.com/) to analyze the structure of the story. Larry suggested the title be changed to Complicity in Heels. His reasoning: My lead character was female, it resonated better with readers of the genre, and it maintained a portion of my original message. I took his suggestion and ran with it.

I’m a Crossfit enthusiast capable of deadlifting more than 385 lbs., turning a jump rope over my body two times for every single jump, and cranking out and endless amount of burpees at a rate of ten burpees per minute. Some of my best writing ideas have come either during or shortly after an exhaustive WOD (Workout of the day). Writers that say they suffer from “Writer’s Block”, simply have not exercised. We’re in a sedentary profession, a few push-ups and a walk might do you some good.

How do you manage to keep your readers at the edge of their seats, wondering what is going to happen next?

Creating suspense is like playing poker and braiding hair. When you’re at the card table you keep your hand up and extremely close to you. As the game progresses, you slowly reveal to your opponents what cards you have in your hand as you play them.

With braiding, you divide the hair into three sections and cross them over one another in a certain sequence until finished.

When it comes to writing a story, you employ both of those methods mentioned above. You slowly reveal information to your readers while interlacing the plot and subplot throughout the storyline. If done correctly, suspense is automatically created. Of course, you always want to go back latter and tweak things for maximum effect.

What is it about the genre that you enjoy most?

I enjoy writing in the crime thriller genre because of its wide latitude from which to work. Every day, the evening news percolates with new story ideas. Yesterday, it was city officials from major metropolitan areas conspiring to bus mentally ill patients to various locations around the country to compensate for slashed mental health services funding. Today, its border patrol agents participating in sex trafficking and running low key prostitution rings— who knows what tomorrow may bring. With criminal activity always evolving, there is no shortage of ideas from which to draw and develop an engaging story.

Marty Frank, because he has Down syndrome and you have to try and put yourself in the mindset of a mentally disabled person, make sense to the reader and come off as authentic. That’s a difficult recipe, no matter how you fix it.

An average writing day for me starts at 5:00 AM and concludes at 7:00 AM. During that time, I usually try to get in as many writing sprints as possible before leaving for work. Factoring in fatigue, I usually manage to complete two to three thirty-minute sprints.