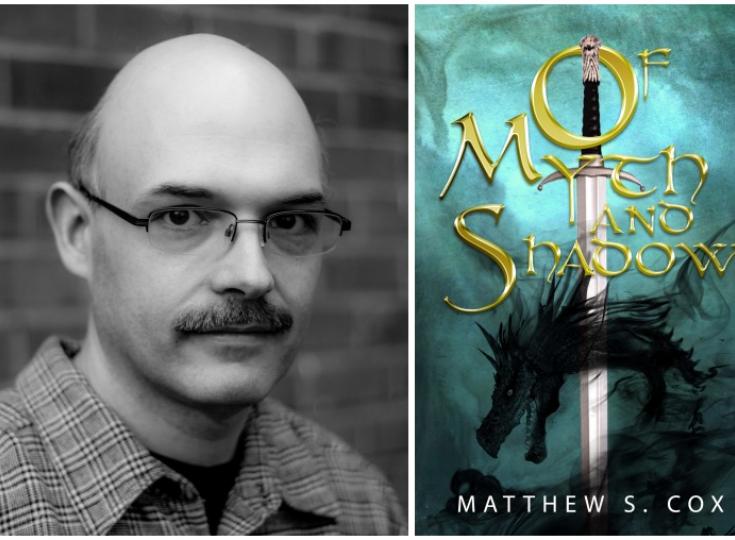 Originally from South Amboy NJ, Matthew has been creating science fiction and fantasy worlds for most of his reasoning life. Since 1996, he has developed the "Divergent Fates" world in which Division Zero, Virtual Immortality, The Awakened Series, The Harmony Paradox, the Prophet of the Badlands series, and the Daughter of Mars series take place. His books span adult, young-adult, and middle-grade fiction in multiple genres, predominantly science fiction, cyberpunk, post-apocalyptic, and fantasy.  As our Author of the Day, Matthew tells us all about his book, Of Myth and Shadow.

Please give us a short introduction to what Of Myth and Shadow is about.

Of Myth and Shadow is a high fantasy sword & sorcery tale about a group of characters whose fates become intertwined as they deal with the way recent threats to the kingdom affect them, as well as all having personal situations to resolve. On one hand, it is an epic fantasy about a plot against the king, but on the other, it’s a character-driven story where each of the mains needs to figure out exactly where they belong in life.

The Kingdom of Aegaan is considered by most to be one of the nobler / more righteous areas in the land, ruled by a king regarded as wise and kind. When elves begin attacking outlying villages for no apparent reason, already iffy relations between elves and humans strain to the point of overt hatred and retaliation against non-humans in the area. In addition, a shadowy group of demon-worshipping cultists gathers strength in the shadows, waiting for the arrival of their promised leader.

I originally wrote a rough version of this novel back in 2001. It’s been so long that I’m a little fuzzy on how it came to be, but it had something to do with a bunch of free time and a lot of ideas. I’d been heavy into fantasy roleplaying games (tabletop) and figured it would be a natural extension to take those stories and characters and translate them into novel form.

When I first drafted this, I was extremely new to writing. More recently, after having finished some eighty or so other books, I discovered this manuscript file and—with no small degree of trepidation—decided to dive in and see if I could make something reasonable out of such an old, newbie attempt to write.

As it turned out, it took a ton of work and a vast amount of rewriting, deleting, and new content. However, I am confident that I’ve come up with a story that fans of high fantasy will enjoy.

Tell us more about Kylie, what makes her tick?

Kylie is a Sylanthi (wood elf) who has spent her entire life in her home village. She has an extremely naïve view of the world and starts off with no real concept that cruelty or evil is a thing that exists. Her kind separate childhood from physical maturity, insofar as while her body is full-grown (roughly equivalent to a human at about eighteen), her mental state is more akin to that of an innocent child—at first. The Sylanthi undergo a spiritual maturity which they ritualize and celebrate. At that point, the individual becomes fully an adult in their society.

Unusually enough for her kind, Kylie is highly empathic and the sort of person who would do anything to help someone. She even feels guilty for harming a person who tried to kill her. Initially, she’s terrified of humans since she’d been raised on vague stories of how dangerous they are. However, as she is thrust against her will out of the comfortable surroundings of her home, she taps inner courage no one who knew her expected she’d have.

Beyond anything, she wants to help people, be happy, and do as much as she can to make everyone around her smile.

The book follows many characters, whose paths cross at various points in the storyline. Why did you create it this way, instead of just following one group?

This is an interesting question. Most writers would probably never dare attempt a multi-POV novel as their first attempt to write. At the time I initially drafted this, I didn’t know enough about writing to even comprehend that might be a bad idea… or an overly ambitious one. As an odd parallelism, in 2013 when I decided to take writing more seriously, the next “first novel” I wrote (I’d largely set the old version of this one aside as a learning exercise) Virtual Immortality, also had five main characters in a rotating point of view. That book came out a little longer than most people considered ‘acceptable’ for a debut novel, so I set that aside as well and wrote a single-character book to pursue publication first.

The best answer I can come up with for why I created this book in this way is “it’s the story I had at the time.” A second answer might be I couldn’t decide which character to use so I just decided to use all of them.

Tell us more about Penumbras - what inspired you to create him?

Penumbras is sort of an embodiment of the characters’ fears and darker, hidden thoughts. He’s part trickster, part rogue spirit, part voice of their subconscious. Some characters are more unnerved than others, some less so… a certain small wizard comes to mind. It’s been a while, but I think the inspiration for him came from a combination of Alan Rickman’s Sherriff of Nottingham (in the regrettable Costner movie) and his Hans Gruber personality. He’s sort of a sarcastically imperious fly in the ointment that enjoys playing games with the character’s lives.

I can skillfully get caught at every red light in my way when trying to drive somewhere. I’ve also designed a few tabletop roleplaying game systems.

I think the inkling of it has always been with me even though I didn’t realize it until 2013. For years, I’d been creating characters and stories for roleplaying games, and ‘hobby writing.’ At some point in 2012, while working a day job in email support, my supervisor commented about the way I wrote emails that “I should be a writer.” He’d written a book and wondered if I’d ever given any thought to doing so. Thinking of the 400,000 word Of Myth and Shadow (original draft) I’d written 11 years before that, I said ‘I kinda dabbled at it.’ However, his prompt set the idea gnawing at the back of my mind again.

Back then, I’d still been playing World of Warcraft, but it had gotten rather boring and grindy, more like a job than a game. Almost everyone who played that I knew had either quit or barely logged in. It also started to feel like a massive waste of time. So, I decided to stop playing and throw all that energy into writing instead. Virtual Immortality was the initial result, then Division Zero (the single-character [shorter] book that I tried to find a publisher with). Ever since I’ve been as addicted to writing as I’d once been to WoW.

When you start on a new book, what is the first thing you do?

Depends on if it’s a new thing or another book in a series. If it’s a new thing, I’ll come up with the overall concept of the setting and characters, then jot down some notes for the main story arc. If it’s another book in an existing series, I’ll go straight to jotting down notes for the story arc. Eventually, those notes grow to the point of being a chapter outline. Then I come up with titles for each chapter, go over it a few times to make sure it all makes sense and flows, then transfer it to Word and start drafting.

I can’t really say where my best ideas come from. Maybe if a reader or someone outside my head told me what my “best” book(s) were, I’d be able to say where those ideas came from. Mostly, I draw on a lifetime of various movies, books, video games, roleplaying games, and other random observations that all mix together in my brain. A good portion of the time, what inspired an idea might not even be readily obvious to me. For example, while in a Barnes & Noble a few years ago signing copies of The Summer the World Ended, I looked at something in my immediate area that caused me to think of the title Nine Candles of Deepest Black. I have no idea what it was; the title simply leaped into my forebrain. (That’s the only time I had a title before a concept for a book.)

Yes. Having designed roleplaying game rule sets ever since my teens, I have a need for things to follow a sense of logic. For example, all the psionic powers in the Divergent Fates universe are codified in a rulebook. Likewise the races, magic, and so on in Of Myth and Shadow. I’m guessing most writers don’t develop a 600-page rulebook for the setting, but I happened to have that handy.

Not for me. Honestly, I find writing in fictional worlds much easier since there’s no need to research the real world and stay true to life. I mean, certain things (people need air so to speak) hold true no matter what the setting is, but in a fictional setting, I’m free to have laws work however I want, or invent the geography as needed. Perhaps my head is, as they say, in the clouds, but I’ve always had an easier time leaving Earth behind for other places.

One quirky habit I have is that I always make the first word of anything I write something that is meaningful to the main character’s life, thought process, or circumstance at the beginning of the story. For example, the first word of Division Zero is ‘adrift,’ because that’s how Kirsten feels in that moment.

An average writing day for me is either coming home from the day job, plopping down in front of the computer, and typing until it’s time to sleep. Or, if it’s a day off, waking up and writing in 12-14 hour benders with the occasional break for food or a run to the bathroom.

I’m presently working on some Samantha Moon short stories with J.R. Rain. After that, I’m going to be writing a post-apocalyptic novel.

Where can our readers buy this book, discover more of your book or interact with you?

Of Myth and Shadow is available via Amazon. I am also selling signed copies directly (cheaper than online, too). A few of my books are available in electronic format from other retailers, but Amazon’s exclusivity thing with the KU platform makes it difficult to go fully wide.

Readers can find me online here: