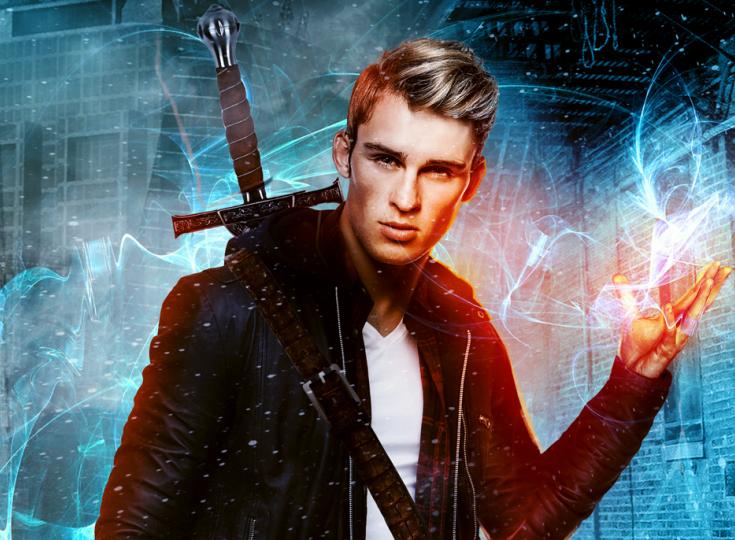 M.D. Massey has been a voracious reader since he was in grade school. After about the fiftieth time Massey finished a book and thought, "I could do better than this!", he started writing fiction in his spare time. As our Author of the Day, Massey talks about his latest book, Druid Justice, his fascination with fairies and reveals where his best ideas come from.

Please give us a short introduction to what Druid Justice is about.

Druid Justice is the fifth book in my Junkyard Druid urban fantasy series, and in this installment I’m introducing new stakes, new challenges, and new villains.

In Druid Justice, Colin is continuing his druid apprenticeship with his mentor, Finnegas, while attempting to track down a serial killer who is targeting fae. He’s also learning to cope with life as a shifter, a condition that comes with its own unique complications, advantages, and drawbacks. And, Colin is navigating his relationship with his current girlfriend Belladonna, while being haunted by his deceased former girlfriend, Jesse.

In a nutshell, it’s 80,000 words of fast-paced urban fantasy mayhem. If you like a lot of action, magic, fantastic creatures, and a little romance as well, you’ll likely enjoy Druid Justice.

What inspired you to write an urban fantasy featuring fae?

I’ve been fascinated with fairies since I was young, a preoccupation that started when I first read the story of the Cottingley Fairies. Even as a child I could tell that the photos had been faked, but the idea that the Fair Folk could be lurking in my own backyard or in the woods where I liked to play… well, that’s enough to spark any child’s imagination, don’t you think?

When I decided to write my first novel I was certain that I wanted the fae to feature prominently. One of my early abandoned manuscripts was about a “fae hunter,” not a fae who hunts, but a human who hunted fae. It was horrible, but the idea later evolved into Colin McCool and the Vampire Dwarf, and later that turned into the Junkyard Druid novels.

What drew you to the genre?

Everyone always says, “Write what you know, write what you read” and that’s what I did. I read a lot of urban fantasy, or at least I used to until I started writing full-time. Lately, between my writing schedule and keeping up with my day job gig (which has become my side hustle now), I don’t have much time to read at all. In fact, I currently have John Conroe’s latest book, Summer Reign, and book three in Tao Wong’s System Apocalypse LitRPG series sitting idle on my Kindle, waiting to be read.

Tell us more about Colin McCool. Why is he such a relatable character? How has he grown as a person through the series?

Colin is a deeply-flawed person who is just trying to do the best he can. He’s a good person at heart, but he’s also brash, prone to violence, and as a shifter, he has a sociopathic side to his personality that he really can’t control... yet. He’s experienced a lot of pain in his life, and to compensate for his own losses and failures he’s always trying to right wrongs and protect other people. Plus, he’s a bit of a smartass. It’s hard to dislike a character like that.

It’s no secret, but I taught martial arts professionally for a number of years. I’m getting older now, so I don’t train nearly as hard or often as I used to, but I still train at least three times a week in various arts that I’ve picked up over the years. I also make a mean fettuccine alfredo.

How does Druid Justice tie in with the other books in the series? Can it be read as a standalone?

It can, although readers will probably want to start with Junkyard Druid. However, if you pick up Druid Justice without having read the other books, you won’t be lost at all. The book follows its own unique story arc, and I provide enough backstory in the first few chapters so readers can jump in at book five if they so choose.

Before I answer that, I’d like to point out that ideas are a dime a dozen. Follow-through is what separates the wheat from the chaff. Aspiring writers always seem to ask how established writers come up with their ideas, and I think they miss the boat with that line of inquiry. What they should be asking instead is, “How did you develop the discipline to finish a novel?”

But to answer your question, most of my ideas come to me when I’m daydreaming, which I do a lot. When I was twelve, my mom took me to an audiologist because my sixth-grade teacher would be yelling at me in class, and I’d be off in my own world, oblivious to what was going on around me. As it turned out, my hearing was perfect; I was just so bored with school that I’d started creating my own inner world, and I went there daily to alleviate the boredom.

To this day I can retreat inside my head and be so involved in my thoughts that I have no idea what’s going on around me. It drives my wife up the wall. But, that rich inner world is where my best ideas germinate.

See, now that’s a useful question. I’m a bit of a completionist, the type of person who has to do every side quest in an RPG before they finish the main quest. I’m also an INTJ, and I learned long ago that cultivating an undivided focus is the key to success in all my endeavors.

Some writers can work on two or even three books at once; Asimov was famous for that, and he sometimes had a dozen projects going at once. But for me, I have to work on one project at a time. I suppose that’s why I work fast, so I can get on to the next new project or idea.

That maintaining one’s dignity under unfair and difficult circumstances is the highest form of honor a person can display.

Yes, I absolutely consider myself to be a disciplined writer. I’m at my writing desk every weekday by 9 am, and I write until I hit my word count goal. I take a week or two off after finishing a novel, then I’m back at it again. If you want to be a successful indie author, that’s what it takes.

Can you give us a sneak peek into what you are working on now?

I’m currently working on a spin-off novel that features two popular characters from the Junkyard Druid universe. I don’t want to reveal more at the moment, but I think readers will be pleased with the concept and storyline.