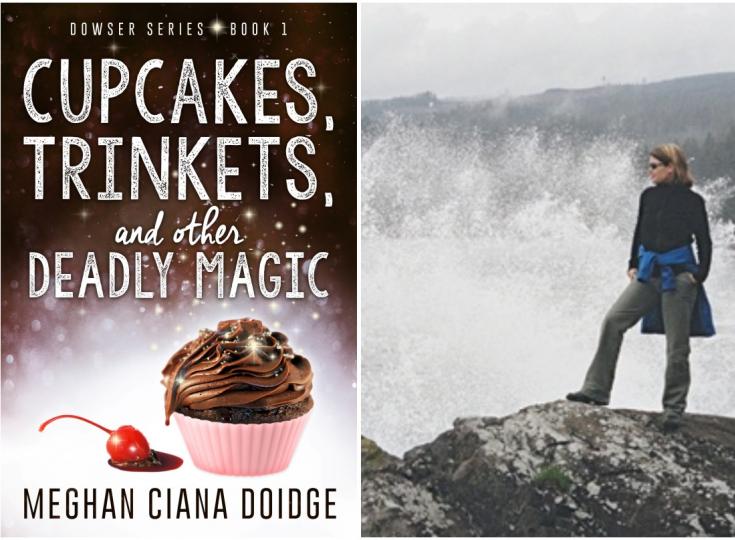 Meghan Ciana Doidge is an award-winning writer based out of Salt Spring Island, British Columbia, Canada. She has a penchant for bloody love stories, superheroes, and the supernatural. She also has a thing for chocolate, potatoes, and cashmere. As our Author of the Day, she tells us all about her book, Cupcakes, Trinkets and Other Deadly Magic.

Please give us a short introduction to what Cupcakes, Trinkets and Other Deadly Magic is about.

The Dowser Series is an urban fantasy set within the Adept Universe. The titular character, Jade believes that her only talent is baking cupcakes and making pretty trinkets. But, when a vampire appears at her bakery, she discovers she’s terribly mistaken – and not only about her meager magic. Jade's only defense against the resulting onslaught of betrayal, black magic, and murder is her sarcastic wit and substantial chocolate stash.

What inspired you to write about a girl who has a vampire show up at her bakery?

While I was a big reader of urban fantasy, I usually wrote thrillers, action/adventure, and horror. When I ran out of books that contained all the elements I adored – magic, action, romance, tension, found families and great dialogue – I realized I should try to write my own.

Did you plan from the start to make this into a series, or did that just happen along the way?

The Dowser Series was always going to be the opening chapters into my larger Adept Universe.

I’m a planner. During brainstorming, I flesh out the characters and their personalities. Then I outline, never forcing a character to do anything that isn’t natural to their backgrounds and world view. So that’s the long way of saying: no, my characters don’t control the plot. They react.

Please tell us more about Jade - what makes her tick?

Jade tastes magic. And when she likes the taste of someone’s magic, she generally likes the person. But if your magic (or spell, etc) doesn’t taste good to her? Well, let’s just say that all bets are off, because Jade also wields a pretty, but deadly knife.

Ha. I have no secrets. But I’m a fairly good knitter, gardener, and baker.

I don’t think I’ve ever been challenged when creating a character, but there are certainly some stories that take a long time to incubate. Originally my book, Catching Echoes (Reconstructionist 1), was supposed to fall after Dowser 4 in the timeline. I wrote half the book, realized I wasn’t ready to write it, and set aside. I then wrote all three Oracle books and the second Dowser trilogy before tackling the Reconstructionist again.

Readers say you created a really interesting magic system in your book. Tell us more about it.

Magic system. Hmmm, probably best to read the books. It’s spread throughout and I doubt I have the ability to paraphrase it concisely. Otherwise, I wouldn't have written 20+ books (so far) to explore it.

I’m a storyteller. I can’t not be. Novels are my current medium, but I was an actor for a long time then a filmmaker and a screenwriter. If I didn’t write them down the stories would just crowd my mind until I was completely dysfunctional. I, ah, actually get a little ’testy’ if I haven’t written new words for too long. Ha.

I have a series of notebooks – currently six that are actively being filled – in which I jot down ideas that are trying to distract me. That keeps me focused primarily on my main project. Writing is my job (and my joy, of course).

I’m not sure my habits are interesting … I work 6 days a week (and the occasional Sunday if I’m on deadline), from 9am to … late, if you count time on social media/research/reading/etc, which I do. I’m pretty much fuelled by hot chocolate. I work on a treadmill desk. I create playlists for each of my series, listening to them while brainstorming/outlining. Oh, I love Scrivener!

The next book in the Adept Universe, Misplaced Souls (Misfits of the Adept Universe 1) is with the editor and I am brainstorming a space opera series that I’ve been working on for the last year or so. I think it might be the right time to finally write it!

I blog at www.madebymeghan.ca but am most active on Facebook, Instagram, and Twitter. I adore chatting with my readers. Each Sunday I post about what I’m doing/reading and ask readers to tell me what they are up to as well. It turns into a great book recommendation thread!