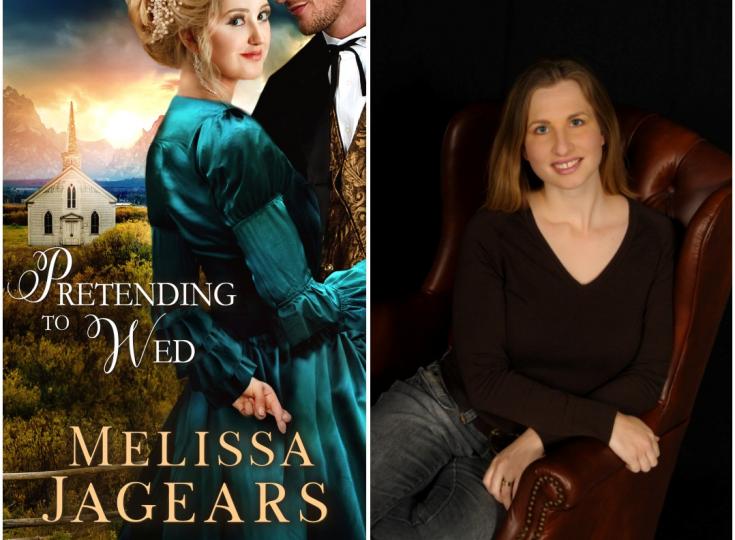 Much to her introverted self's delight, award-winning author Melissa Jagears hardly needs to leave her home to be a homeschooling mother and novelist. She lives in Kansas with her husband and three children and can be found online at www.melissajagears.com, Facebook, Pinterest, and Goodreads. As our Author of the Day, Jagears tells us all about her book, Pretending to Wed.

Please give us a short introduction to what Pretending to Wed is about.

The ranch Nolan Key has spent decades working for, even lost a leg for, is now his—or at least it should be. But an absurd clause in his father’s will means he’s in danger of losing the place to his lazy, undeserving cousin. Nolan finds himself scrambling to save his home—by proposing marriage to the town laundress.

Corinne Stillwater’s hands have betrayed her. Numb from hours of doing the same work over and over, her hands will only heal, according to the town doctor, if she gives up the laundry and marries. But she’s been stung repeatedly by love before, so that is one remedy she can’t swallow.

When Nolan offers Corinne a marriage in name only, how can she refuse? Such a partnership could give them the security they seek, but what if the ranch isn’t as secure as they believe, and their lives—and dreams—aren’t quite as compatible as they thought?

What inspired you to write about a guy who proposes marriage to the town laundress in order to save his ranch?

My love of Marriage of Conveniences! And well, I found the whole shtick of some older person writing a will that forced someone to marry to retain property in my genre quite silly….so I challenged myself to come up with a way to write that scenario that I’d buy—and let my characters make fun of it at the same time.

Tell us more about Nolan Key.  What makes him tick?

His desire to prove himself is a deep-seated need because of his family situation, and yet he isn’t delusional enough to believe he has no limitations. It’s that push/pull fight within him to do the best he can, knowing he’ll never be able to conquer all.

What makes Corinne Stillwater so special?

She’s different than my other heroines because she’s an inventor. She hopes to have a patent in her own name one day, during a time where not many women held patents.

I’m a decent photographer, I crochet, I can throw a discus really far (Still! Even decades after high school, I haven’t lost it!), and I can sing.

Both Corinne and Nolan have health problems.  Why did you create them this way?

I don’t quite remember why I had Nolan be an amputee, but I gave Corinne a health problem to give my totally independent female character a believable reason to reconsider her stance on marriage. Plus a friend of mine had commented on the fact she never saw a fictional character with her health problem, carpal tunnel, and I figured I could remedy that, even though they really had no idea what it was back then.

Which character in Pretending to Wed's voice was the easiest to write in and why?

My male leads are usually my easiest, I just tend to understand them more because I’m a very logically-driven, emotionally-guarded woman who doesn’t find conversation easy. But Corinne was pretty easy for me, she and I share some qualities, esp. her stubbornness and the desire to “do everything herself.” Both characters actually are that way in this book, and well, they might just mirror their author with that trait.

This is book 2 in a series.  Can it be read as a standalone? How does it tie in with the other books in the series?

Yes, all my books can be read as standalones. If you pick up any of my novels, you shouldn’t be lost. However, secondary characters in each series overlap. So the heroines and heroes of previous books often show up to give you glimpses into their lives as they interact with the current hero and heroine. I try my best not to give outright spoilers to plot elements in past books, but obviously, you’ll see that the hero and heroine got together—but these are romance novels, so that’s no surprise, the fun is seeing how their relationship unfolds. Plus many secondary characters show up since the books are set in the same “world.”

How it consumes your life! I’ll be staring off in the middle of dinner, and my husband will say, “What book are you working on?” and he’s right, I’m mentally off in one of my books’ “worlds.” I often have to grab my phone in the middle of a drive to record myself a voice message of what needs to happen in a book, or I’ll go to bed, just to get back up again to go write down some flash of inspiration, or when I’m watching movies I’ll wonder how I can “do it better” or incorporate some fascinating aspect into a book of mine or ….. you get the idea.

I’m not sure it’s very interesting, but whenever I get “stuck” in not knowing what should happen next in a book or I feel that something’s off but don’t know what it is, I’ll go take a shower. Something about being stuck in a box, keeping the automatic part of my brain busy, helps free my creativity.

I’m working on the third story of this series, it’s a reconciliation romance for two of my older married characters—and what better time to reconcile than at Christmas!

These are my main online places where I’m most active: 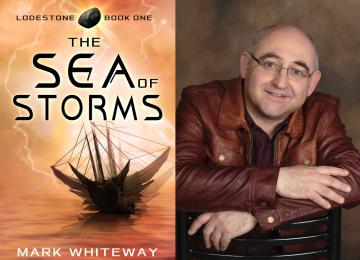 Mark Whiteway - Epic Sci-Fi Adventure Featuring an Ancient Destructive Technology
FEATURED AUTHOR - Writing SciFi has been a long-held ambition for Mark Whiteway. As a kid, he read everything - H.G. Wells, Jules Verne, Robert Heinlein, etc., etc. At twelve years old, he wrote a novella. Following that, life intervened, and it was only in April '09 that Mark determined that he wanted to get back to writing. He had several ideas running around in his head for some time, of which the Lodestone concept was probably the strongest. As our Author of the Day, he tells us more about the trilogy.