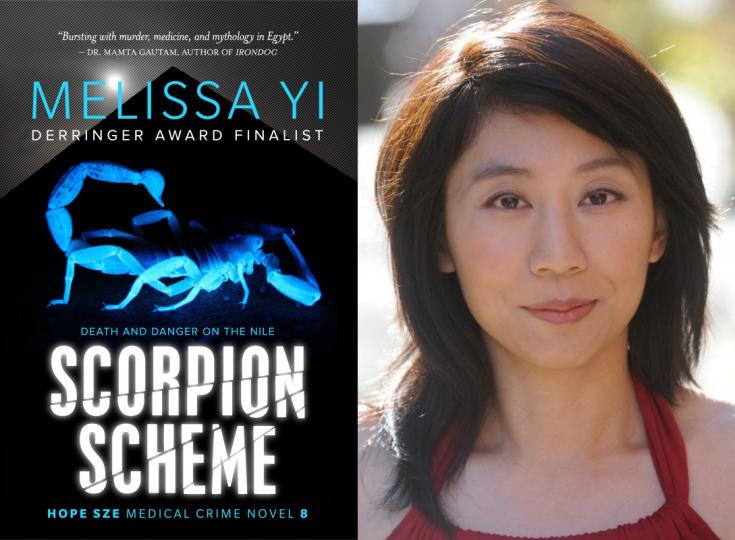 Melissa Yi is an emergency physician and award-winning writer. In her newest crime novel, SCORPION SCHEME, Dr. Hope Sze lands in Cairo and discovers a man with a nail through his skull who might hold the key to millions in buried gold. Previous Hope Sze thrillers were recommended by The Globe and Mail, CBC Books, and The Next Chapter as one of the best Canadian suspense novels. Yi was shortlisted for the Derringer Award for the world’s best short mystery fiction. Under the name Melissa Yuan-Innes, she also writes medical humor and has won speculative fiction awards. As our Author of the day, she tells us all about Scorpion Scheme.

Please give us a short introduction to what Scorpion Scheme is about.

Dr. Hope Sze and her boyfriend land in Cairo, planning one month's work in the emergency room, but almost immediately, Hope must try to save the life of a man with a nail in his skull. This injured man could hold the key to the Kruger millions, a legendary trove of buried gold.

What inspired you to write an Egyptian adventure?

I was invited to travel the world in exchange for writing novels for a travel organization called Narat. First I visited Ecuador. The Galapagos Islands are filled with dramatic landscapes and animals that aren't afraid of humans.

Then I flew to Egypt. I took a cruise boat down Nile, visited the Valley of Kings and Queens, explored temples that were thousands of years old, and swam in the Nile and in the Red Sea. That was before I learned more about its ancient and current history and politics. So I knew I would write a book about Egypt, which became Scorpion Scheme (https://windtreepress.com/portfolio/scorpion-scheme/).

Tell us more about Dr. Hope. What makes her so special?

Dr. Hope Sze is a resident doctor in what used to be called her internship year, which means that every month, she switches to a new rotation, whether it's surgery or radiology. That alone takes a lot of stamina. However, she has a unique gift for finding murder victims and tracking down the killers. In the first book, Code Blues (http://windtreepress.com/portfolio/code-blues), she drives to Montréal, Canada, which is famous for its art and gourmet food, the first thing that happens is that she finds a dead man in the locker room.

Why did you decide to include the legendary Kruger Millions in this story?

When I was visiting Egypt, a number of South Africans were injured in a terrorist attack in an episode that opens Scorpion Scheme.

I start researching South Africa and Egypt, and their histories of colonization and plunder, and I found the legend of the Kruger millions.

I wanted to write a book that would be a little lighter for people during the pandemic, and a treasure hunt seemed perfect.

Who can resist the legend of buried gold?

Gosh, I don't know if I have any secret skills. I do sing and act in how one woman show that I wrote, directed, and produced, called I Am the Most Unfeeling Doctor in the World, which won Best of Fest in its debut performance. Sometimes people are surprised so I'm willing to go on stage and potentially make a fool of myself!

A mountain of research! I knew almost nothing about Egypt. So I had to read, listen to podcasts, and interview people who were more familiar with Northern Africa. It was stressful, but it's always good to learn.

The trick for Egypt was that I had to research both the ancient lore, which is venerated in Western cultures, while trying to grasp Arab Spring, why former president Morsi died in prison, as well as street food, feminism, and whether deadly scorpions live in Cairo. It was all a crash course.

Why did you pick Cairo as the backdrop for your story?

I was open to the idea of Hope exploring the rest of the country, since I was able to travel from Cairo to Luxor, Aswan, and Hurghada.

However, I have to follow the story when it comes to Hope, and she was tied to the hospital. So Hope spent the entire book in Cairo.

One of my friends and colleagues, originally from Egypt, told me that Scorpion Scheme was a wonderful book, worthy of the FBI, but she was sad that I didn't get to see the rest of the beautiful country.

I assured her that I did get to see some of the immense history and generosity of Egypt. Only Hope was trapped with a killer.

This is book 8 of a series. How do the other books in the series tie in with this one?

Up until Scorpion Scheme, Hope has mostly been confined in hospital, because when you're medical resident, you spend most of your waking hours looking after patients, with the occasional exciting foray home to sleep, study, or eat. At least, that's how I spent my medical residency. Hope's thrilled to fly to a new continent.

Hope also spent the previous seven books establishing her relationship with the other characters. She's involved in a love triangle with two men, but only one of them gets to accompany her to Egypt, for example.

The first three books are more mystery based and lighthearted, and from book 4 on, starting with a hostage taking on the obstetrics word in Stockholm Syndrome (https://windtreepress.com/portfolio/stockholm-syndrome/), they take a darker, more thrilling turn. So I counsel people to start where they feel comfortable, whether it's with the innocent Hope in Code Blues, or the more seasoned amateur detective flying to Cairo for Scorpions Scheme.

You are an emergency physician. How has this influenced your writing?

Medicine influences my writing in every way. First of all, I don't mince words. I used a lot more literary, evocative language before med school! Secondly, Hope sees everything in a very direct way and doesn't know how to lie; she makes jokes in the worst situations; and she's grateful for any blessing, whether that's her health or a day off.

For me, medicine means I get to see people on what may be the worst day of their lives. It is a privilege to be a part of their stories.

Andrew Brown, of Design for Writers, masterminded the cover. This cover incorporates Egypt, an air of mystery, and once the title was finalized, it needed a scorpion. Most people take photos of scorpions with fat pincers, but ironically, the most lethal kinds have large tails to store the venom. Once I knew that, I couldn't accept any stock photo emphasizing the pincers.

I also needed the scorpion to look sinister. My cover scorpion is lit up by ultraviolet light. This was combined with a backlit pyramid to symbolize Egypt. Thanks for asking about the cover, since not many people do, but is an integral part of the book.

Depends on the genre, but for Hope, I read tons of crime articles. Often a real-life murder inspires me, and I often try to incorporate up to three crimes per novel. So if I want to make the plot more complex, I start researching, and usually a real life criminal has done something even worse than what I imagined.

Then I research how the perpetrator was discovered and arrested, and I may incorporate that in my book.

However, over the course of the novel, I will change my mind multiple times, destroying previous drafts in order to keep the reader and myself entertained.

The research never ends. I love it, though.

I am working on the ninth Hope Sze mystery. During the pandemic, I'm avoiding really dark, heartwrenching stories. My friends and colleague, the gynecologist Dr. Nathalie Gamache, offered to invent a gin for this thriller.

When I started researching gin, I found some terrible historical crimes, which led me to Prohibition. I wrote a free short story for fun based on this theme: https://vocal.media/criminal/the-mob-bar-mob.

This thriller will be the first in the series to combine elements of history, with bootleggers from Canada crossing the border to Detroit or Chicago.

My website, http://www.melissayuaninnes.com/, is the best. Subscribe to my newsletter and win a free Hope Sze novella! 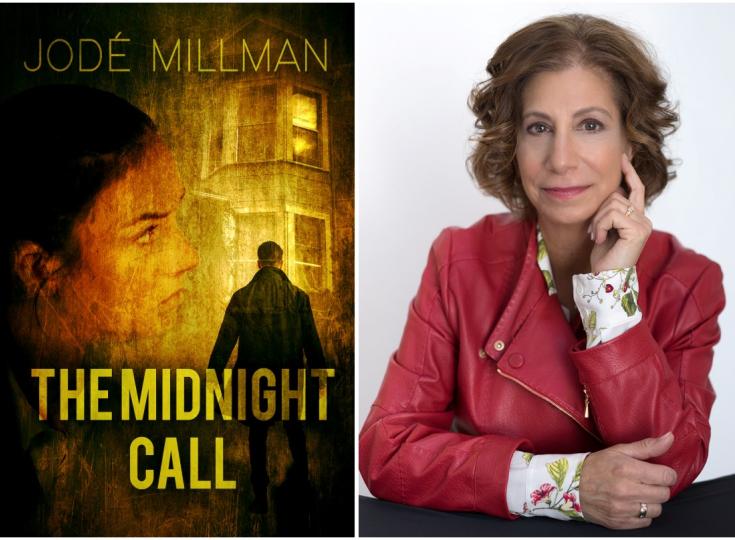 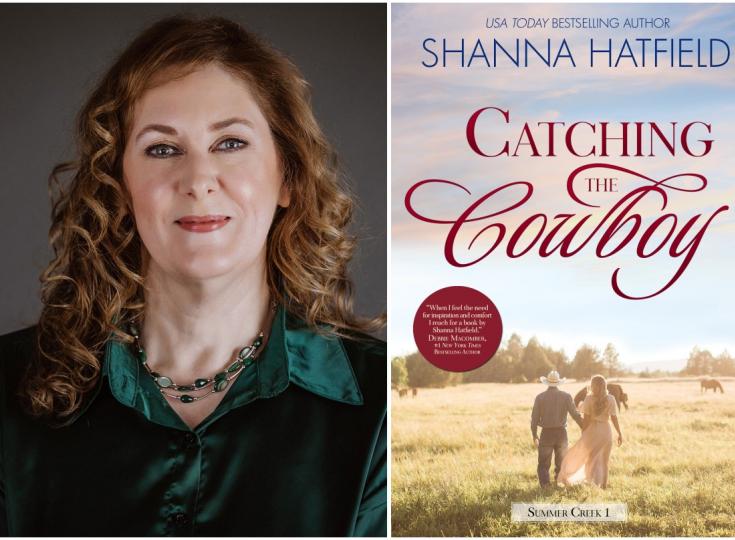 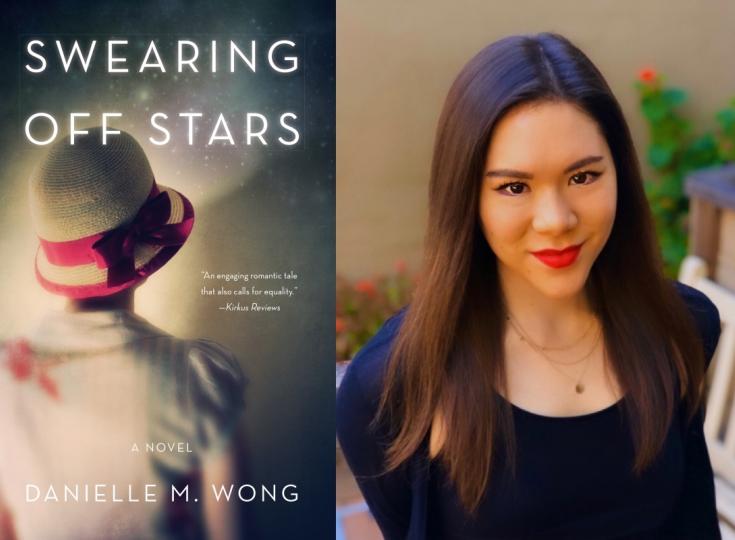 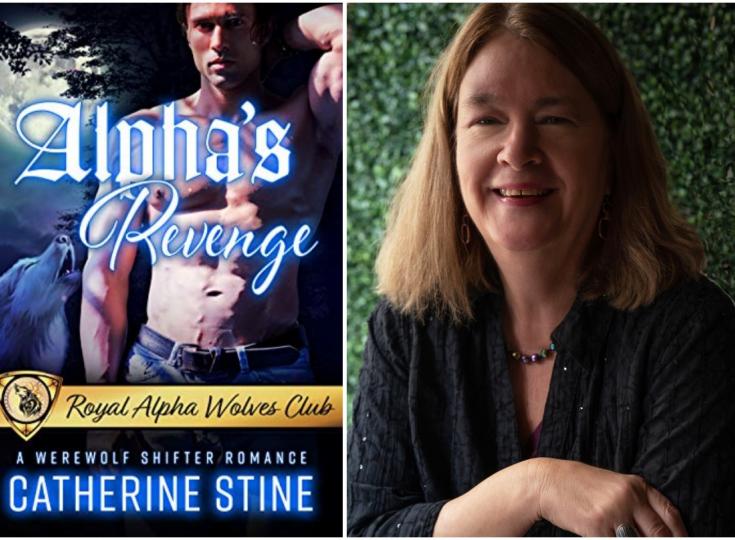