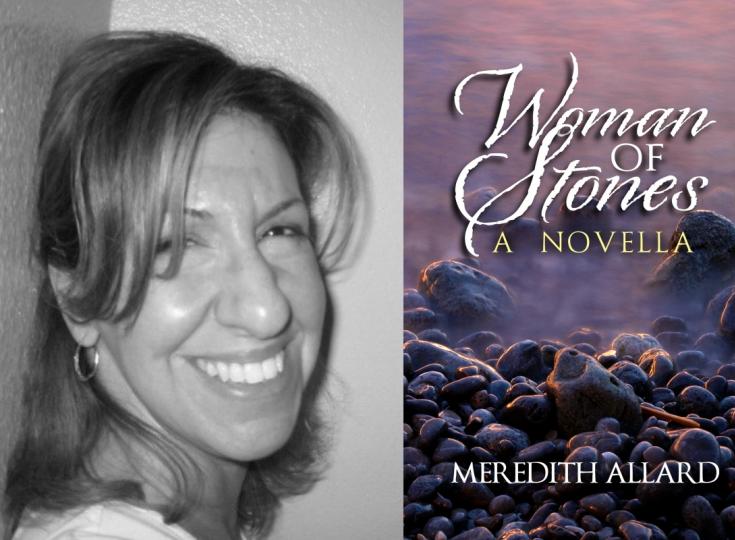 Meredith Allard is the author of the bestselling paranormal historical Loving Husband Trilogy. Her sweet Victorian romance, When It Rained at Hembry Castle, was named a best historical novel by IndieReader. Her other books include Christmas at Hembry Castle; Down Salem Way, the prequel to the Loving Husband Trilogy; Victory Garden, set during the women's suffrage movement; Woman of Stones, a novella of Biblical Jerusalem; That You Are Here, a contemporary romance; The Window Dresser and Other Stories; and Painting the Past: A Guide for Writing Historical Fiction. When she isn't writing she's teaching writing, and she has taught writing to students ages five to 75. She loves books, cats, and coffee, though not always in that order. She lives in Las Vegas, Nevada. As our Author of the Day, she tells us all about Woman of Stones.

Please give us a short introduction to what Woman of Stones is about.

Woman of Stones was inspired by the Bible story about the woman caught in adultery who was about to be stoned to death before Jesus’ wise words saved her. The story imagines who she was, what her life was like, how she ended up there ready to be stoned to death, and what might have happened to her afterwards.

What inspired you to write about someone from a poor Jewish settlement in a powerful Greco-Roman world?

I read The Red Tent by Anita Diamant and I absolutely loved that book. I loved Diamant’s gorgeous prose and I loved the idea of retelling a Bible story from a woman’s point of view. I’ve always loved that Biblical lesson—let you without sin cast the first stone—because it’s a lesson most of us need to be reminded of on a daily basis. That gave me the idea to delve further into this woman’s story.

Readers found this story very thought-provoking.  Was this your intention?

That’s actually an interesting question about whether or not it was my intention to make it thought-provoking. When I originally began writing the book, my only intention was to tell the story of this woman who was dragged as an adulteress into the Temple Court in Biblical Jerusalem. As I delved further into the writing process I realized that there were layers to the woman’s story that needed to be unpacked. What was life like for women in Jerusalem during the time of the Second Temple? How were marriages arranged, and what if you’re not suited to the person you’re married to? What about gossip and the ways people are controlled within their societies? These were all questions that, the further I dug into them, the more I realized that maybe in some ways our society hasn’t changed as much as we like to think it has. The story certainly caused me to think, and I’m glad readers have felt the same.

Tell us more about the woman.  What makes her tick?

She has an intriguing backstory, the woman. She grows up poor, a shepherd’s daughter in Nazareth, a Jewish village. Yes, I chose Nazareth specifically because I, and I hope readers as well, found the idea of exploring Biblical Nazareth interesting. But where she grows up in Nazareth she’s close to the powerful, richer Greco-Romans and she can see the comforts the women have, comforts she doesn’t share because she is a poor shepherd’s daughter. She covets their fine clothing and jewels, and she thinks that what she wants more than anything is to have those fineries for herself. When she has the opportunity to get exactly that, she finds that material wealth may not be the most important thing after all.

Readers found it interesting to see the portrayal of everyday life, the descriptions of Nazareth and Jerusalem.  How much research did this story require from you?

Woman of Stones required a lot of research because it was a time that was so foreign to me, both literally and figuratively. I wrote an early draft of Woman of Stones when I was living in Boise, Idaho, and I did a lot of my research at the library of Northwest Nazarene University. I wasn’t a student there, but I would visit the library to find books and articles to help my research. I spent hours in that library reading and taking notes. It took me some time to be able to visualize life in Nazareth and Jerusalem 2000 years ago, but after enough reading and note-taking, I understood enough to be able to bring the woman’s story to life.

I’m also a writing teacher and I teach education at the university level. I love to cook and to bake. I love my coloring books—some childhood joys never leave you. Of course, reading is a great skill, though I don’t think it’s very secret since most people know how much I love to read.

Why did you title this "Woman of Stones?"

The most obvious answer is that she is the woman who is about to be stoned to death for being caught in adultery. The underlying answer is that stones are used to grind the wheat from which they made bread, a staple food then. She is entranced by the gemstones that the richer Greco-Roman women wear, and when she is married her husband gives her gemstones. Stones are an important theme in the story.

Which character was the most challenging for you to create?

The woman herself was the most challenging character because without her there is no story. This book is a first-person narrative, so I had to dive very deeply into her psyche to tell the story from her point of view. Once I understood her, her memories, her mistakes, and her hopes, then everything else fell into place.

One question I’m asked a lot about this novel is why the woman doesn’t have a name. The answer is two-fold. First, she doesn’t have a name in the Bible story and I felt silly tagging her with some arbitrary name—Betty, Sarah, or Joan, for example.

Second, you have to understand a bit about the Hebrew language. During the time when Woman of Stones takes place, which is the era of the Second Temple about 2000 years ago, Aramaic was the spoken language among the Jewish people and Hebrew was the language for prayer. Still, in Hebrew the word for husband is ba’al, which is also the word for master. The Hebrew word for wife is isha, which is also the word for woman. In other words, the word for woman and wife are interchangeable in Hebrew. So when her husband calls her “Woman” he could just as easily be calling her “Wife.” You can glean a lot about the unfair divide between men and women from that one tidbit. This is the same society where a woman could be stoned to death for adultery but not a husband and the same society where a woman needed her husband to grant her a “get” (a divorce) but the husband could dissolve the marriage when he wished.

When I’m writing any of my novels, I’m most fascinated by people and the choices they make. One thing I’ve learned from writing historical fiction is that people haven’t really changed over time. People still want the same things—to belong, to love, to know that they matter. Clothing, medicine, even social mores have changed, but people’s inherent wants have stayed the same and I enjoy exploring that through my fiction.

As far as writing with underlying messages, I prefer for readers to decide for themselves what my stories mean. I always like to say that my stories can be taken on different levels—there is the story itself, and many readers are happy just reading for the story and that’s perfectly fine. But there are layers beneath the story that readers can dig for if they wish. I don’t like to say what my stories or my messages are about, though, since I think it’s more meaningful for readers to decide for themselves.

The first thing I do is kick the story around in my head for a while without writing anything down. I like to play around with ideas and see if the idea is something I’d like to write about. When I make the decision to write a historical novel, I know I’m committing myself to months of work so I like to play around with the idea for a bit first to see if it’s something I want to commit so much time and energy to. Then I’ll read a bit about the era to get a sense of the time I’m writing about. From there, it’s idea gathering, prewriting, and finally drafting.

I’m not sure my writing habits are particularly interesting, although since COVID-19 has put both of my teaching jobs online, I’m finding that I can’t continue staring at a computer screen for upwards of 12 hours a day so I’m starting to find ways to return to pen and paper like I used in old-timey days. I’m experimenting with handwritten journals as a way to work on my writing.

I’m working on two projects at the moment. I’m in the final edits of my first nonfiction book called Painting the Past: A Guide for Writing Historical Fiction, which will be published on February 16, 2021. Then my next historical novel will be about pioneers on the Oregon Trail. That one will be released Autumn 2021.

The best place to contact me or learn more about my work is through my website, meredithallard.com.