Meredith Allison - Murder, Bootlegging and a 1920s Showgirl
Posted on 14th of July, 2020 by Naomi Bolton 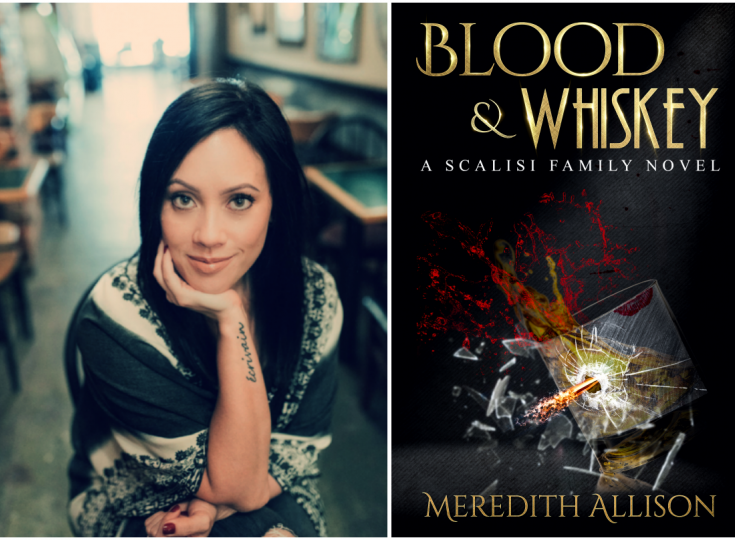 Meredith Allison is a writer (and reader) of many kinds of fiction, but in particular historical organized crime and dark thrillers. A native of Lincoln, Nebraska, she currently lives in Omaha. As our Author of the Day, Allison tells us all about her book, Blood & Whiskey.

Please give us a short introduction to what Blood & Whiskey is about.

BLOOD & WHISKEY is the first book in a Prohibition-era mafia crime series. It follows the rise to power of a young Sicilian American showgirl, Mia Scalisi, and the challenges she faces becoming part of the criminal underworld.

What inspired you to write about a Sicilian American showgirl who is out for revenge?

I've always been a huge lover of mafia stories and Italian and Sicilian culture. The Godfather is my all-time favorite movie, and I thought about how a woman would handle being placed in such a role at a time when men controlled everything. Also, as the daughter of an immigrant, I love immigrant stories, and setting it against the backdrop of one of the most revolutionary periods in American history seemed like the perfect matchup.

Why did you pick the 1920s as a backdrop for your story?

The 1920s absolutely fascinate me. It was a decade of so much change and revolution. Women earned the right to vote, liquor was banned, and organized crime blossomed and became this massive machine. Also, there's so much glitz and glam in the 1920s. I love history, so it felt like the right decade to choose.

Tell us more about Mia Angela Scalisi. What makes her tick?

Mia Angela Scalisi has big dreams of stardom. She grew up on dusty vaudeville stages, and later became a hit on the nightclub circuit. The last thing she expected was to become a mafia boss, but fate had other ideas. She's spurred on by concepts of loyalty, especially family loyalty, pride, ferocity, and the need to succeed.

I did tons of research to make this as authentic as I possibly could. From researching slang and vernacular and the etymology of certain words, to living conditions, to historic buildings that no longer exist, to clothing, to music. Authenticity is critical to me, because I wanted to create as immersive an experience as possible. I want readers who pick up this book to feel like they're stepping back into the 1920s. But, research is enjoyable to me, so I loved the process of it.

What was the most interesting part of this research?

The most interesting part of the research was the clothing, for sure! When we think of what a flapper from the 1920s looks like, fringe dresses and feather boas come to mind, but 1920s fashion was so much more elegant and refined, and the details were mind-blowingly intricate.

My secret skills include the ability to play video games for hours on end, making up songs for my dogs, and procrastinating until the last possible moment!

Family is a huge theme of this book and the series. Arguably it's the most important theme. Personally, my family is extremely important to me, and I wanted to explore different familial bonds between the characters. When all you have in the world is your blood, what will you do for them? Is there a line you won't cross, a person you won't become? I loved writing the brother-sister bond between Mia and Nick. I have an older brother myself, so he inspired a lot of that relationship they share.

Mia was pretty challenging to create, because she's such a gray character. I wanted to strike a balance between having good intentions and doing bad things, and the toll that takes on a person. I didn't want to create some archetype of the gangster moll and have her be bloodthirsty. If she sheds blood, I wanted to explore the traumatic effect it has on her. I wanted to explore the evolution of a character who takes the world on her shoulders and ends up having to make literal life-and-death decisions. I like to call her a mixture of Michael Corleone and Daenerys Targaryen.

What is your favorite line from Blood & Whiskey and why?

My favorite line is: "She was beautiful, so beautiful it hurt. A hard, haughty queen with a world she never wanted at her feet and bitter hatred in her heart. It was heartbreaking to see."

All the time! I like to have an outline as a roadmap, but I know that my characters will do what they want, and I have to be prepared to serve them and the story the best way possible.

I usually try to write first thing in the morning, as early as possible. That's when my creativity is freshest. I like to write by the window in natural light, and if I listen to music, it has to be very soft and instrumental only.

Right now, I'm working on Volume 3 of BLOOD COMES FIRST: The Scalisi Family Novellas. I'm really excited about this three-party short story collection. Each volume details a period in Mia's life between 1901-1924. Readers get to read about her family coming to New York before she was born, and will get insight into who her parents were (including some family secrets Mia herself doesn't know about). I've juxtaposed these stories with American events taking place at the time, such as the Triangle Shirtwaist Factory fire of 1911, Nick's service in WWI, the beginning of Prohibition. I'll be compiling these stories into one volume in the fall, and there'll also be 3 bonus stories, for a total of 24 short stories that will serve as a prequel to BLOOD & WHISKEY and the rest of the series.