Michael James Ploof - A Satirical High-Adventure Romp Through the Fantasy Genre
Posted on 8th of March, 2021 by Naomi Bolton 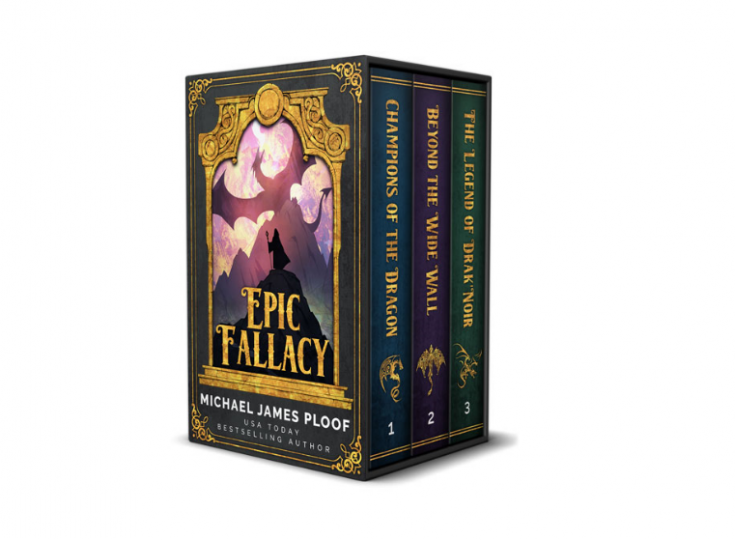 Michael Ploof spent his youth in the land of make-believe. School was a bore, and growing up in the "Boonies" without cable television forced him to use his imagination. If he wasn't holed up in his bedroom playing with his vast collection of action figures, he could be found in the forest with a wooden sword or staff in hand, battling the forces of evil. As an 80's kid, he was raised on a healthy diet of movies like Star Wars, The Neverending Story, Labyrinth, Goonies, and endless other classic (but strange) movies. As a reader, he enjoys books that take off right out of the gate, sweep you off your feet, and whisk you away on an epic adventure. As an author, he tries to create books that do the same for his readers. He writes fantasy, and still lives in a land of make-believe, except now he gets to share the adventure with others. As our Author of the Day, Michael tells us all about his latest book, Epic Fallacy.

Please give us a short introduction to what Epic Fallacy is about.

Epic Fallacy is about a group of unlikely heroes who are chosen by Kazimer, the greatest wizard in the land, to defeat a dragon. But like the title insinuates, the entire quest is a ruse. Kazimer hasn't chosen heroes he thinks can defeat the dragon, but rather fools that he thinks will inevitably fail and become food for the dragon. For generations Kazimir and the dragon have kept this bargain, but this time things might turn out differently. If Murland and his new friends can find a way to work together, they just might have a chance at actually defeating the dragon once and for all. Although it is a humorous fantasy, it's also a story about finding common ground, teamwork, and overcoming inner demons.

What inspired you to write about someone who becomes the groundskeeper at Abra Tower?

Murland Kadabra is pretty much magically useless at the beginning of the book, so the elder wizards put him to work around the grounds for extra credit, which he desperately needs. Although it is obvious to his teachers that he'll never become a real wizard, no one has ever failed at Abra Tower, so they are invested in his success.

Tell us more about Murland Kadabra. What makes him tick?

Murland Kadabra showed some magical proficiency when he was tested at a young age, but not enough to get him into Abra Tower. Thanks to a hefty donation from his rich father, Murland gets into the magical school, promising his parents that he'll make them proud and become a great wizard. Of course, he is a failure from the start, but that doesn't stop him from trying. Years of bullying at the school have hardened his determination, and when he is chosen by Kazimir to be one of the legendary Champions of the Dragon, he believes it to be his last chance at redemption.

This book features a very unlikely party - an alcoholic knight, a gay elf prince, a dwarf with humanism, and an obese ogre. Why did you create them this way?

When I started tossing around ideas for Epic Fallacy, I knew I wanted to create realistic characters who are as flawed and vulnerable as the rest of us. Heroes are too overpowered these days, and if anything I made my characters underpowered to give them room to grow. I also needed these characters to be outcasts, since Kazimir is also in league with the kings of the champions' respective lands. When the dragon arrives, Kazimier goes to each king and asks them who they'd like to be rid of. Murland is chosen because it is the only way for Abra Tower to save face. Rather than having to fail him, they send him off to his death and fate as a fallen hero. Sir Eldrick slept with the queen of his land, so naturally the king wants him sent off to his death. The Elf Prince Brannon is chosen by his father to go on the doomed quest because his father can't come to terms with having a gay son. In the elf king's mind, this will either make him a "real man", or he will be rid of him forever. Gibrig finds himself in the wrong place at the wrong time when the king asks to buy his pig, who also happens to be his best friend. Gibrig should be honored, but instead he is appalled, and after refusing the king and running away with his hog, the dwarf king choses him to go on the fool's quest. Lastly there is Willow, an extremely obese ogre whose chieftain fears will starve the village with her ravenous appetite. To save money and ensure his people do not starve, the chieftain choses her to be a Champion of the Dragon.

Aside from writing, I play guitar, bass, and drums, and have been in three bands called Pantheism, Chaodis, and Drunken Buddhas. I spent 13 years dealing cards in a casino, and could probably deal Texas Holdem blindfolded.

You included some funny pop culture references in the story. Why?

The pop culture references are a nod to Terry Pratchett. This series is basically a fantasy parody, so I wanted to have a little fun with it. And boy was it fun to write!

What did you have the most fun with when creating Epic Fallacy?

I had the most fun creating the characters and watching their relationship blossom on the page. Surprisingly, I had the most fun with the group dialogue and interactions. There's plenty of warring, magic, and daring-do in this book, but the real gems are found in the group dynamic.

Yes. This book was one of those instances when the characters literally created themselves. When I first introduced each character in the book, they instantly leapt off the page and took on a life of their own. I didn't so much make up this story as watch it unfold in my mind as clear as 5G.

People have compared your work to that of Terry Pratchett. Are you a fan?

I've read a few Pratchett books, and yes, I love his style. He's a very unique writer, and while there are similarities in style, my series is a bit more serious.

How do the different books in the trilogy tie in with one another?

Books 1-3 are a complete story arch, like the LOTR trilogy. Book 4 is the 1st in a new adventure.

Sometimes I outline and sometimes I don't. It depends on how complex the book is and how much I've thought about the story. Just about every book I write I spend months daydreaming about before I ever write a word. I have more ideas for books than I could ever write in a lifetime, so I go with the ones that really stand out. Epic Fallacy bugged me to be written for three years, and in that time I built the world and the characters in my mind, when I finally got a chance to write it I went hog wild. I'd thought about it so much that I easily got in 2,000 - 6,000 words a day.

I used to prefer to write at night when the kids were little. But since they graduated and moved out, and my wife and I moved to Key West, I've been writing outside in the balmy tropical heat. When I start a book I have to tune out of the real world to an extent until the book is done. At any given time I might not know what day it is, but I know the names of five deceased dwarf kings. I also prefer to write every day so I don't lose momentum and usually shoot for 2k words a day. As far as weird writing habits I'll leave you with the Hemingway quote, "Write drunk, edit sober."

Right now I've got two books in the works, two very different books. One is an epic fantasy I've been working on for about a year called Hobb and the Giant. The other is a men's adventure portal fantasy called I am Dragon. Hobb and the Giant is a massive undertaking and in my opinion, some of my best writing since Epic Fallacy. After four months of writing I felt I was losing my edge and getting sloppy, so I switched to I am Dragon, a much lighter read, to take a break.