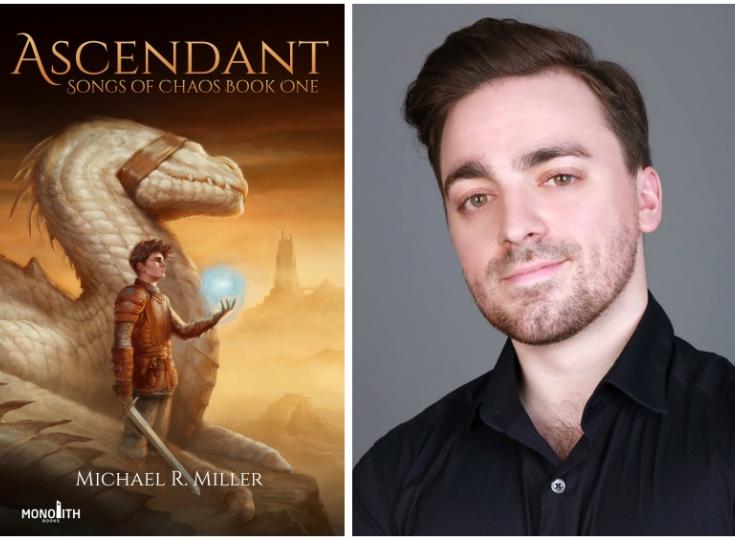 Michael grew up in the grey, wet and wild west coast of Scotland. He began writing his debut book, The Reborn King, when he was 10. Old paper copies of terrible opening chapters may still be found in a drawer back home. Thankfully those early drafts never saw the light of day. In 2015 he renewed his writings efforts and released The Reborn King in November of that year. Since then he has sold over 150,000 books, hit numerous Amazon bestselling charts, including the top 100 of ALL books on Amazon.com. A scene from his first book will be incorporated into the London Academy of Music & Dramatic Arts Exam Anthology for Performance starting in 2019. His new series, Songs of Chaos, begins a new type of dragon rider fantasy combining the best of Eragon/How To Train Your Dragon with eastern-inspired magic systems of Xianxia and cultivation fantasy. As our Author of the Day, he tells us all about his book, Ascendant.

Please give us a short introduction to what Ascendant is about.

Ascendant is about a lowly serving boy who saves a blind dragon from death and rises to become a dragon rider.

It’s the beginning of a new epic in the vein of Pern and Eragon, with a bit of How to Train Your Dragon mixed in. The magic system is more akin to a hard Brandon Sanderson magic system and is inspired by eastern cultivation progression fantasy.

At heart it’s a character driven high fantasy with more optimism than a lot of modern ‘dark’ fantasy.

What inspired you to write about a dragon rider?

The idea of being a dragon rider is timeless. I can’t imagine the appeal of it will ever go away, so I’m hoping readers can enjoy it forever.

The idea of forming a bond to another being presents the chance for very meaningful and touching character relationships. Character arcs are pivotal to any book I write, and a dragon rider book offers so many avenues to explore in this regard.

Tell us more about Holt Cook. What makes him so special?

Holt Cook is what his name says. He’s a cook. In Ascendant he’s the son of the head Cook of a dragon rider Order Hall but yearns to rise above his station and join the riders who defend the land.

His biggest advantage is also his curse. He lets his heart lead him without thinking through the consequences. He’s no stranger to hard work either and won’t let a few setbacks get him down.

He deeply cares about his role, always trying to create the best food possible, something he does throughout the story even when things get dire. This world also has food magic to be explored, something Holt is ideally placed to do.

What, would you say, is so appealing about the idea to fly a dragon?

I think it’s tied into the wider idea of animal or spirit bonding, something that features broadly in legends and myths, and plays into how connections to animals can seem pure. Human to human, we often want something or need something, but with animals somehow that’s not the same. I think we can more easily buy into a pure spirit or ‘soul bond’ with an animal better than we could with other people.

So while being able to fly is obviously appealing in itself, I think it’s a yearning for a deep connection to another being.

Like our hero, Holt, I also love to cook!

What inspired the concept of the Scourge?

It draws on many existential threat ideas – the darkspawn from Dragon Age, classic undead horrors, and hive minded swarms of bugs. Roll them into one terrifying threat and you get the Scourge in this series.

Readers say this book reminds them of classic fantasies. Was this intentional?

100% at least in so far as the ‘feeling’ of the story. I think there is plenty in Ascendant which makes it original, and these seeds will only bloom as the series develops. I followed the heroes journey closely along with Dan Harmon’s simplified Story Circle structure. These things work for good reason. Deep in our monkey brains is a desire to face adversity, overcome it and become better for it.

Key here being ‘overcoming it’. We’ve lost a lot of hope and optimism in modern fantasy, but the resulting dark and cynical stories leave a sour taste, at least to me. Going though hell, in real life or through characters in a story, must feel like there was some purpose to it. Or else it’s just… empty. Remember how Game of Thrones ended?

Every character was tough in their way. I think Holt was the hardest, as strange as that may seem to some. Finding the right balance between hopeful optimism and necessary inner turmoil is a lot harder than it seems. Swing too far one way and the character will feel like a cartoon ‘good guy’ and too much the other way and readers will get annoyed at the ‘moodiness’ very quickly.

The magic system in this book is quite unique. How did that come about?

The magic is inspired by eastern style cultivation stories sometimes called Wuxia or Xianxia. In these stories, characters typically have a magical ‘core’ in their soul which they improve upon over the course of a series. The Cradle series by Will Wight is the best and most popular westernized version of these sorts of stories, which was a major inspiration. I’m also very much into role playing games and making my magic systems ‘hard’ in the vein of Brandon Sanderson. This is where the magic has clear rules and limitations.

The tricky thing with Ascendant is that the core idea of the ‘dragon bond’ also had to matter. Thus, the riders in this world grow in power and skill along two lines. The first being developing their bond to their dragon, which grants them more access to their dragons core and improves their magic prowess. The second is that the rider, through deep meditation techniques, Cleanses and Forges the dragon’s core, increasing their joint ‘pool of magic’. In this way, the dragon clearly benefits from the partnership as wild dragons without riders struggle to build up their magical cores by comparison. Most dragon rider stories don’t make it clear how the dragon would benefit from bonding to a human, so I was very happy to provide a strong reason why.

There is also a strong food magic component to the magic, a black smiting integration and numerous types of powers, abilities and techniques which would take too much time to explain here! Needless to say it’s extensive and will keep building book to book to give excitement to my readers. Many anticipate what major upgrade or discovery will come next.

All the cooking scenes were fun! Looking up historical recipes and linking ingredients to certain dragon preferences. Gave me a real opportunity to make this series into a sort of foodie fantasy.

This is book one of a series. Can it be read as a standalone? How do the other books in the series tie in with this one?

Ascendant tells a pretty complete story while still setting up for plenty more to come. Book 2, Unbound, will release on October 1st 2021.

Right now I don’t know for sure how many books there will be. At least four but possibly a fifth. As many as I need to do the material justice, but not so many as to become a bloated mess.

Mornings are generally for admin and marketing. I tend to be the most creatively productive in the afternoons, and sometimes into the early evening. I require my coffee to start, some calm video game music remixes in the background, and about an hour of warm up time with a lot of staring at the screen with one eyebrow cocked.

Right now, I’m putting the finishing touches to Unbound (Songs of Chaos #2) and getting ready for launch in October! I’ll get onto Songs of Chaos #3 right after that! 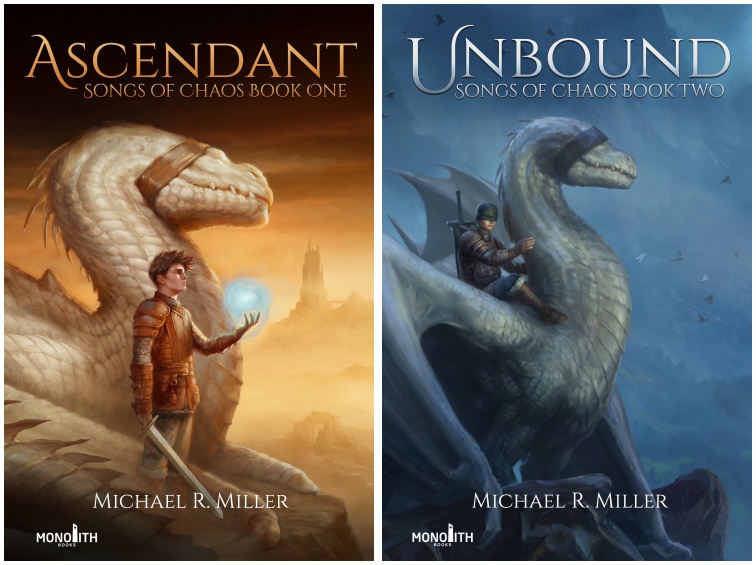 All my books can be found on my website at www.michaelrmiller.co.uk

Readers can also join my Facebook group https://www.facebook.com/groups/650757008879321 OR join my Discord server to chat with me and other like minded readers https://discord.gg/2w2JJRwEGS