Michael A. Rothman - Technology and International Intrigue
Posted on 8th of January, 2019 by Naomi Bolton 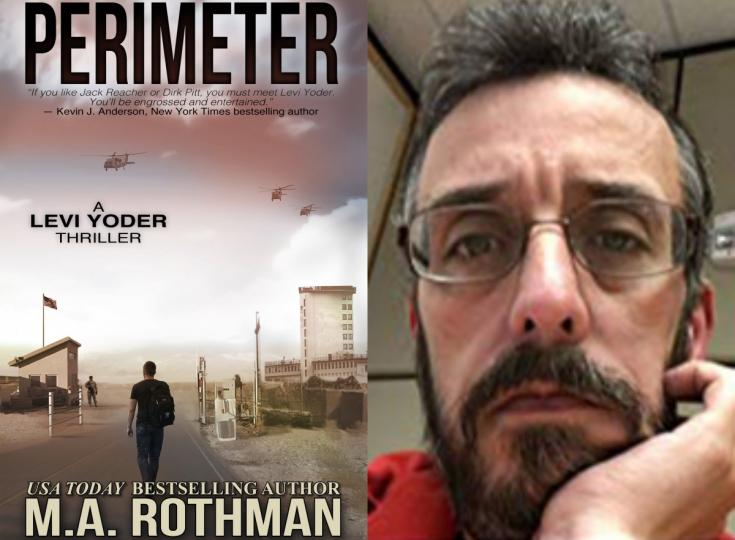 USA TODAY bestselling author Michael Rothman enjoys writing stories that focus on two things: technology and international intrigue. Many of his books span the genres of science fiction, techno-thriller, and mainstream thrillers. His latest novel, Perimeter, is no exception. As our Author of the Day he tells us all about this book.

Please give us a short introduction to what Perimeter is about.

What would it look like if the bad guys (the Mafia) had someone who was both loyal to their organization, but also dedicated to doing the right thing?

From that question, Levi Yoder, the mafia’s “fixer” was born. Imagine if the underworld had their own version of 007.

The CIA needs his help. The Russian mob wants him dead.

With enemies closing in and nowhere to turn, he learns that the one person who may hold all the answers ... is his dead wife.

What inspired you to write about a "fixer" who has to work with the CIA?

I like characters who don’t fit the mold. Levi is anything but what you’d expect a mobster to be. Yes, he can be cruel, when needed, but he has a code. And that code doesn’t preclude working with authorities.

Such a character can bring both the cast of characters from the criminal underworld and government together in unique and unexpected ways. I’ve always seen “bad guys” as having two sides. Writing from Levi’s point of view allows the readers to appreciate things that I think most tales with the stereotypical “good guy” couldn’t tell.

Tell us more about Levi Yoder. What makes him tick?

Levi is loyal, to a fault. Whether it’s to his friends or to doing the right thing (which isn’t always clear) - he’s motivated from the good side of his persona, but without the shackles of the everyday good guy. Bending rules/laws to accomplish a greater good is definitely on Levi’s acceptable behavior list.

Some of the questions that follow reach more into what makes him tick, especially in this book.

Levi has to deal with terminal cancer in your book. Why did you write it this way?

I think a stereotypical bad guy can be hard to relate to for some people. Levi isn’t the stereotype, but I also wanted to start the novel in a place where the main character is going through a personal struggle. One that many of us could relate to either directly or indirectly.

Levi starts the story as a troubled soul. He’s been put through the wringer. In the first chapter, not only is he diagnosed with terminal cancer, his wife dies in a horrible car crash that he suspects was a suicide - for many reasons, she didn’t want to live without him.

But nothing is ever as it seems. Especially when he discovers, after his wife’s death, that he’s inexplicably gone into remission.

It was a moment of breaking for Levi. Leaving his life behind, and his true love - he seeks to start over.

This is a fast-paced thriller that keeps readers at the edge of their seats. How did you pull this off?

When you think you’ve figured things out, if the author has done his or her job well, you eventually realize that wasn’t the case. I think that pulls the reader through, always wondering, “What am I missing? Why did he do that?”

I’m a scientist. So, it wouldn’t be a surprise that most of my writing will have hints of technology being used. Admittedly, with the Levi Yoder series, I keep it somewhat contained, so that it’s never too much for folks who don’t have science as their “thing,” but I took a page from James Bond novels. He’s got gadgets. Why shouldn’t Levi have a few? ;-)

My skills otherwise are fairly mundane. I speak multiple languages, have lived in many places and have visited dozens of countries.

I’m also an unabashed foodie, so you’ll see in almost all my writing a couple things: Science stuff, international settings, and and food scenes.

Perimeter contains quite a couple of twists. Did you plan them out before you started writing or did some of them just "happen" along the way?

A little of both. I always know where a book ends before I start, and I usually have a few goal posts that I aim for along the way. As I write, I come up with ideas and augment my plans a bit. And sometimes, things spontaneously occur to me while writing. So I’m somewhere in the middle of what authors might call a “pantser” (write by the seat of the pants) and a plotter (outline everything before writing.)

How did you go from being an engineer with a background in sciences to a USA Today bestselling author?

Luck? Maybe a bit of skill.

Truthfully, you can never plan these journeys out. I’ve always been creative, but that creativity has largely been relegated to technical things for work. I’m one of the top inventors of a major corporation, so coming up with ideas for a novel wasn’t all that strange for me.

But, one twist that seems to be rare nowadays: I try very hard to keep things within the realm of scientific possibility. Even though I’ve written epic fantasy genres for my kids when they were younger, the writing I do now is the type I’d like to be able to defend with a straight face.

It seems there’s an audience for such things. Who knew? The major publishers didn’t. ;-)

Well, it may not seem like it, but I’m a very business savvy person. Before I had my writing chops straightened out, I was pretty clued in on the business side of things. I have many friends who’ve been doing this writing thing for decades, so I was pretty well coached before diving in.

I will say the thing that I found surprising was the inability to get my novels published through normal channels, even though I had blurbs (recommendations) from people like Larry Niven, Kevin J. Anderson, and a whole slew of NYT bestselling authors.

I didn’t expect to go Indie, but Indie is what I ended up with. Surprisingly enough, my first novel poked its nose onto a national bestseller list, so maybe I did something right.

Einstein. I’d love to geek out on physics with him. Yes, I’m a nerd at heart.

Yes and no. I don’t purposefully write message fiction, per se. But I think my characters are written in a way to describe the human condition. Good and bad, ugly and beautiful - we are who we are.

I don’t delve into politics in my novels, at least not in a way where I take a side. I display things for the reader to decide.

Early in the morning. 3-5am typically. I have a day job still, so it’s before the world wakes up and I have to get started with the rest of the day. Always on the laptop.

Putting the finishing touches on THE INSIDE MAN, which is the follow-up to PERIMETER.

If anyone is interested, I also have two other books that are not mob-related, but might strike people’s fancy.