Michelle Cameron - A Story of Hope from the Turbulent Past

Michelle Cameron - A Story of Hope from the Turbulent Past
Posted on 2nd of June, 2021 by Naomi Bolton 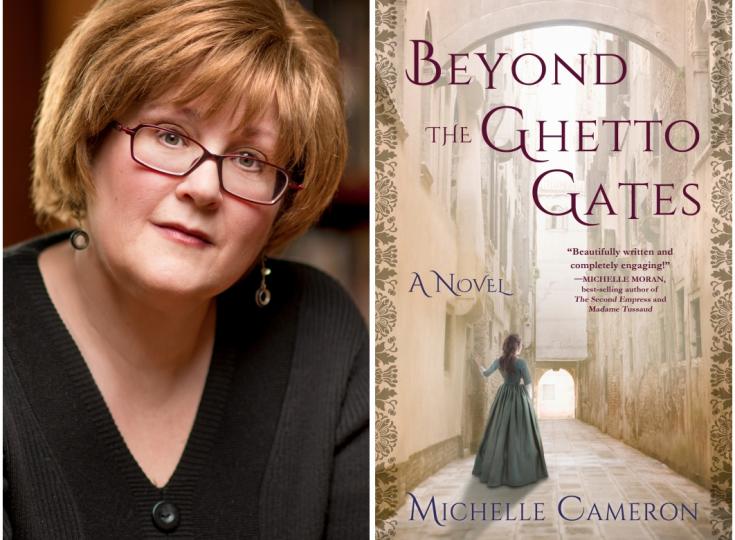 Michelle Cameron is an author and director of The Writers Circle, which offers creative writing to kids and adults in Summit, South Orange, Maplewood, Montclair, and Morristown. She teaches novel classes to adults and classes to children and teens. She is also a freelance writer and editor, handling everything from corporate writing to creative editing. Michelle lives in New Jersey with her husband. She has two grown sons of whom she is inordinately proud. As our Author of the Day, she tells us all about her latest book, Beyond the Ghetto Gates.

Please give us a short introduction to what Beyond the Ghetto Gates is about.

Beyond the Ghetto Gates is a historical novel set during the turbulent days of Napoleon Bonaparte’s Italian campaign (1796-97). When French troops occupy the Italian port city of Ancona, freeing the city’s Jews from their repressive ghetto, it unleashes a whirlwind of progressivism and brutal backlash as two very different cultures collide. Mirelle, a young Jewish maiden, must choose between her duty – an arranged marriage to a wealthy Jewish merchant – and her love for a dashing French Catholic soldier. In the meantime, Francesca, a devout Catholic, must decide if she will honor her marriage vows to an abusive and murderous husband. Beyond the Ghetto Gates depicts how the Jews and Catholics of Ancona wrestle with ancient traditions, prejudices, and the challenges of a rapidly changing world. 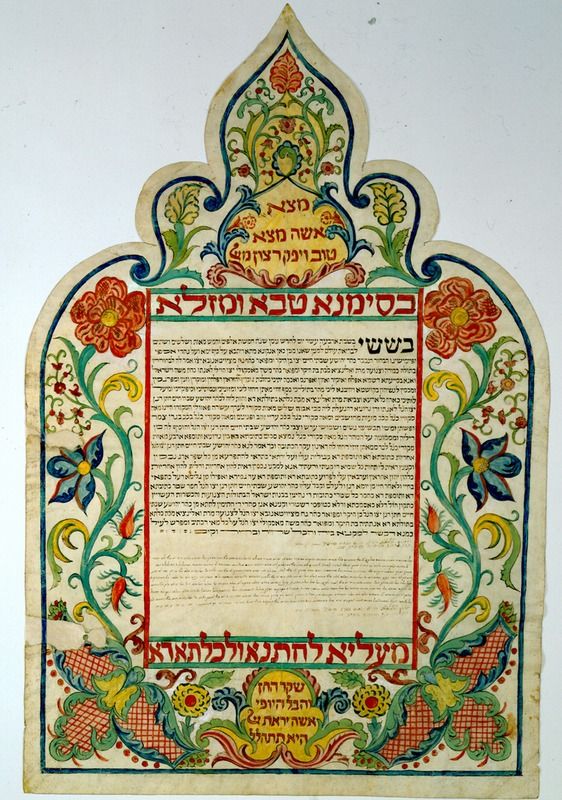 What inspired you to write about a group of Jews who were freed from their repressive ghetto?

My previous novel, The Fruit of Her Hands: the story of Shira of Ashkenaz, was set during the rise of antisemitism in 13th Century Europe. While, as a family saga, it had many lighter moments, I had to portray such dire subjects as book burning, torture, blood libel, persecutions, and more such medieval horrors. So I really wanted to find that rarest of beasts – a joyous moment in Jewish history. It was when I was reading Michael Goldfarb’s nonfiction account, Emancipation: How Liberating Europe’s Jews from the Ghetto Led to Revolution and Renaissance, that I came across the episode of Napoleon finding the Jews of Ancona locked behind ghetto gates and how he sent his Jewish soldiers to emancipate them. This incident clearly had “novel” written all over it – and furthermore, it was a history that I hadn’t known before and certainly had never seen in any other novel. I love writing about hidden gems of history!

Tell us more about Mirelle. What makes her tick?

Mirelle has an unusual skill for a young woman of her time – a mathematical, managerial mind. These attributes allow her to contribute to her family’s legacy by keeping the books and managing the workshop that her grandfather established. But because this type of work is not an acceptable ambition for a late 18th Century maiden, she is forbidden to pursue them. She is expected to marry a wealthy man instead, to raise a traditional Jewish family, and run a household. Her infatuation with a French Catholic soldier makes her question these constraints even as her strong sense of duty toward her family and religion make her try to accept this role.

(As an aside, I should add that numbers befuddle me and always have. I was lucky enough to have a mathematician in my own family – my eldest son – whose passion for numbers I borrowed!)

Why did you pick the Italian port city of Ancona as the backdrop for your story?

As I mentioned above, it was Ancona where Napoleon first demolished the ghetto gates, which made it perfect for my setting. I knew nothing about the city when I first started researching it (and still have never been). But it became clear that the fates were smiling upon me because of the two surprising discoveries I uncovered during my research of the city. The first was that it was then the world center of ketubah (Jewish marriage license) creation. The artisans of Ancona were the first to illuminate these documents and many of the exquisite examples are on display in exhibitions of Judaica worldwide. (It was a joy to be able to pick them out when traveling to such far-flung cities such as Edinburgh, Toronto, and New York.)

The second was stumbling across the story of the miracle Madonna in Ancona’s cathedral. According to a Vatican document, the true-life character of Francesca Marotti and her daughter Barbara were the first to see the portrait of the Virgin Mary turn its head and weep. There’s a further anecdote about how the young general Bonaparte was shocked by something he saw in its visage. There isn’t a historical novelist alive who could have resisted including that story!

How much research did this book require from you in order to make the history part of it ring true?

A tremendous amount. In addition to consulting original sources, histories and biographies, I frequented museums to see the period rooms and spent hours staring at period portraits and paintings. I also read contemporary novels, which was sheer joy this time around, since Jane Austen wrote then and I’m a huge fan. As part of my process, I create a timeline of the history to help me know when certain events need to occur, consult maps old and new, and use calendars I’ve downloaded of the specific years to be accurate when writing about specific days and dates.

I limit my pure research, however, to about three months, because otherwise, I’d never emerge from the lure of its black hole. But I still have to research nearly every day that I write, because I always come across something else I need to know which will immerse my readers in that time and place.

I’m sorry to say, not that many! When I was still working a day job, I longed for what I call “the writing life” and have been fortunate to have been able to create that. I am co-owner of a NJ-based creative writing school, The Writers Circle, where we teach everyone from second graders to adults – and its success has tapped into those business skills I earned from years in the corporate world, coupled with a love of teaching. When not writing, I’m generally curled up with a book – right now, I’ve embarked on a series of sequels to teach myself what to embrace and what to avoid as I write my own first sequel.

In which way is Beyond the Ghetto Gates a cautionary tale?

Unfortunately, we were seeing a steep increase of antisemitism while I was writing, and it has only become worse in the past months. Beyond the Ghetto Gates deals with how people perceived the Jews living in their midst and the hatred that they imbibed from their clergy, families, and neighbors. The novel shows how this bias against a people because of what they believe can result in distrust and even explode in violence. In the novel, I wrestle with the difficult question of whether getting to know “the other” is enough to overcome such ingrained prejudice, using the relationship between Daniel and Francesca to explore that optimistic hope in all its messy complexity.

Where does your fascination with history come from?

I’ve always loved history. My reading and viewing choices gravitate toward historical fiction and costume dramas. My high school yearbook even notes that I wanted to become a historical novelist when I grew up, so clearly it’s long been an ambition of mine. I minored in history in college – and would have majored in it if the Latin requirement hadn’t made that impossible. (Languages are not my friend.) And with both my novels, I am thrilled that I found episodes of little-known history to explore. It’s been a joy to bring these periods to life and to introduce them to my readers.

They did just this morning! I had planned out my next three chapters in the newest book and before I could follow my own blueprint, one of my characters decided it was time to write a letter to his cousin. But since my best writing days are the ones when my characters take over and my fingers simply transpose where they want to go and what they want to say, I am always delighted when this happens.

What was your biggest challenge when writing Beyond the Ghetto Gates?

The beginning and even more so, the end of the novel. I actually conceived of two and a half endings. Without giving away any spoilers, I can tell you that my first ending was vociferously booed down by all my beta readers as well as my erstwhile agent. I didn’t have the necessary pages to fully develop my second – my publisher has a strict word count, which meant I had to cut some 15 thousand words from my manuscript as it was. My third came about just as I was pulling my hair out, due to send the manuscript in to my publisher. I consulted my son (whom the book is dedicated to) and he suggested the current ending. I happen to love it and many of my readers do as well. And it does help lead into the sequel.

I cast about to find an episode in history that speaks to me, something that hasn’t been explored before. Then I have to consider what the story will be. I actually discarded a completed first draft of a novel when I discovered that the narrative arc wasn’t strong enough, having just strung together historical events. Since then, I’ve never forgotten that I’m a novelist first and that the history has to serve the story and not the other way around.

I’m a morning person and my best writing is done first thing (after breakfast and a long walk.) Once upon a time, back when I had a full-time job and was mother to young children, I used to get up at 4:30 in the morning to write for two hours. That was how I finished my first novel. Now that my kids are grown and my day job is The Writers Circle, I no longer have to do that – and frankly, sometimes I miss that discipline. There are days when I resent this wonderful business I’m a part of, because its demands can get in the way. But I’m happiest when writing, so I carve out at least for some time every day to either write or revise. 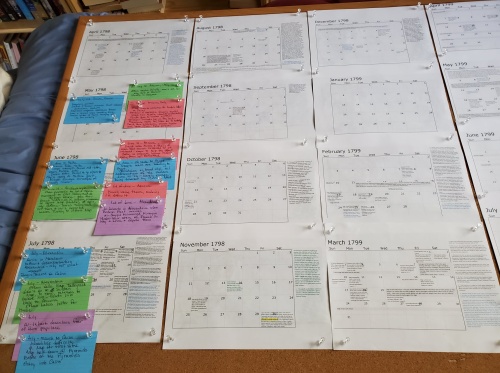 The sequel to Beyond the Ghetto Gates. Napoleon does something bizarre – he heads to Egypt with a fleet of about 300 ships and takes 126 savants – engineers, artists, scientists, writers, etc. – with him. The novel continues Mirelle and Daniel’s story and introduces some new characters, including the Egyptian al-Jabarti, a real-life historian and scholar who chronicled the French occupation.