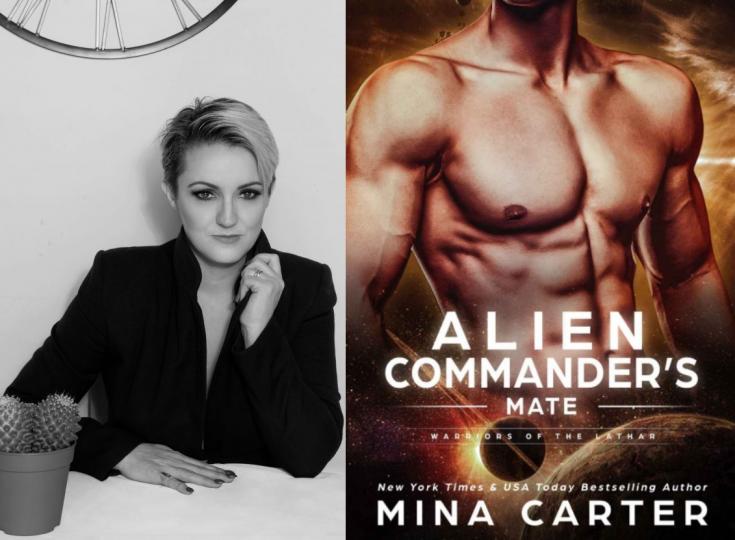 Mina Carter is an author of gritty, hot romances with heroes to die for and heroines that can kick your ass with words alone. Mina can usually be found hunched over a keyboard, frantically trying to get the images and words in her head out and onto the screen before they drive her mad. She's addicted to coffee and would like to be addicted to chocolate, but unfortunately chocolate dislikes her.  As our Author of the Day, Carter tells us all about her latest romance, Alien Commander's Mate.

Please give us a short introduction to what Alien Commander's Mate is about.

Alien Commander’s Mate is the sixth book in my Warriors of the Lathar series. It follows the events as the heroine, Amanda, attempts to find her two daughters who were previously taken by the alien warriors. To do so, she agrees to the terms of handsome war commander Fenriis, who fell in love with her at first sound (yes, he heard her voice first ;))

Why mix Romance with aliens warriors? What drew you to this setting?

Why wouldn’t alien warriors want romance too? A lot of my work explores what makes us human, and with the lathar its how similar they are to us, while being completely different. They have different drives and motivations, but very much the same core needs; for home and family. It’s been fun writing a totally alien and rather male dominated society as it clashes with some very strong women and the ensuing romances that rely on compromise of the two halves.

In many romance novels the heroine is unattached, but Amanda is a woman with two children. Why did you take this approach?

In my experience there aren’t that many romances with older heroines. Being far older than the standard romantic heroine myself, I enjoyed writing about women nearer to my own age group, who often have a very different outlook on life to a younger woman. It was an enjoyable challenge to bring that difference into the story.

Amanda’s daughters appear in other books, and having Amanda left on earth on her own bothered me. While I was writing the book before this one, where Amanda’s house is all but destroyed when her second daughter is kidnapped, I realised that Amanda not only needed her story, she deserved it as well. So she got a hunky Lathar too.

This is Book 6 in a series. How does it tie in with the other books in the series? Can it be read as a standalone?

All the books can be read as standalone apart from Alien Healer’s Baby, which is a companion book to Pregnant by the Alien Healer. The rest all have one couple, one romance, so can be read standalone. BUT, I would advise them to read in order as each book builds on the world and series story, so you may not get certain references if you read them standalone.

I can burn water ;) Other than that, I’m also a photographer.

Despite writing about enigmatic scenes in foreign settings, your characters feel relatable and real. How did you pull this off?

I try very hard to get into the characters that I’m writing. To understand where they’ve come from and the problems their lives present to them, even the alien ones. Understanding what their core needs and what they actually want (which often isn’t what they think they want) helps me bring them to the page. I think a lot of the time life is a struggle for everyone, so to read about characters, even fantastical ones, going through similar issues helps, even in just a little way.

Remembering alien names after seven books can be interesting!! Other than that, I approach them just the same as any other scene in writing. I am very much a plotter so I stick to my plan, then replan if I need to!

I work to a chapter outline, then break that down into scenes within the outline. Sometimes I’ll go off on a tangent when a new scene presents or one over-runs but generally… yeah, I’m a plotter.

Sometimes yes. Usually the men (go figure ;)). It’s usually the cheeky-type characters that go and do that. Lol

Among the wealth of characters in this book, who was the most difficult to create?

Isan, the healer. He’s a younger character with a lot of weight and responsibility on his shoulders. I suspect he’ll be a bit of a challenge to write when he gets a book.

If you had a book club, what would it be reading — and why?

Hmmm, I’m a bit of an eclectic reader so it would probable be the Grey Bastards by Johnathon French. War pigs, need I say more?

I drink gallons of coffee and often write at the kitchen table rather than in my office. I tend to write early morning, rather than later at night and I have to have music playing, I can’t write if it’s silent.

Can you give readers a sneak peek at what's coming next from you?

My next release will be book seven in the Warriors of the Lathar series – Bonded to the Alien Centurion. Human General Dani Black is sent to the Latharian flagship to retrieve the Terran Vice President but ends up in a challenge fight and ends up ‘married’ to handsome latharian warrior Sardaan… (It’s available on pre-order now ;) http://mina-carter.com/books/bonded-to-the-alien-centurion/)