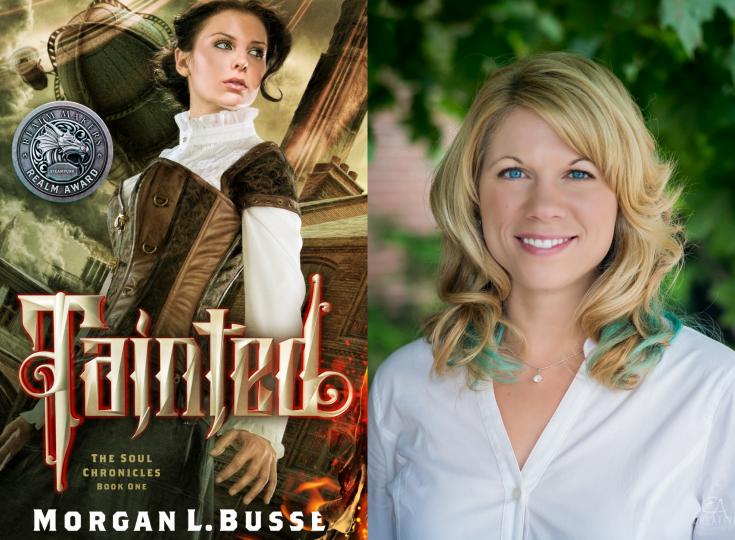 Morgan L. Busse is a writer by day and a mother by night. She is the author of the Follower of the Word series and the award-winning steampunk series, The Soul Chronicles. During her spare time she enjoys playing games, taking long walks, and dreaming about her next novel. As our Author of the Day, Morgan tells us all about her latest book, Tainted.

Please give us a short introduction to what Tainted is about.

Tainted is a loose Frankenstein-style story set in a Victorian steampunk world about a young woman who is turning into a monster from the inside out. When she loses control of her emotions, she is able to manipulate the laws of science, but that ability is also consuming her soul. She teams up with a bounty hunter to find a cure before her time runs out and her soul dies, leaving behind a monster in her place.

I once saw a question asking if Necromancy could ever be used for good. The moment I saw that question, an image came into my mind of a young woman who was tainted by her father’s experiments. She has this amazing power where she can manipulate the laws of science (cause things to combust, move things with her mind, etc…), but every time she does, it destroys a part of her soul. I wanted to go on her journey, see what she went through, what choices would she make, and would she find a cure at the end?

Tell us more about Kat Bloodmayne - what makes her so special?

She’s a smart, sensible woman who wants to be loved by her father, but instead becomes only an experiment.

The cost to unleashing her power, comes at a great price. Why did you take this approach?

I wanted to explore what a character would do if they had a great power, but each time they used it, it destroyed a part of their soul. What choices would that character make? Would they still use that power? Did they care what happened to them? Would they use that power for good or evil? Would they try to find a cure?

Why did you make Stephen a bounty hunter?

Because bounty hunters are cool! It fit in with a character who strongly believes in justice, but cannot stay on the police force, so he chooses to go off on his own, just on the right side of the law, and bring in criminals.

If I told you, I’d have to write you into my book and kill you…

Tainted is set in a steampunk world. Why this backdrop?

Originally it was going to be a fantasy with a necromancer, but I then I discovered steampunk and fell in love with the combination of alternate history, amazing inventions, and mad science (which completely fit in with this story). So my necromancer turned into a brilliant scientist who dabbles with the mystic—and inadvertently affects his daughter—in a Victorian world with airships, steam-powered inventions, and corsets.

Much of the book deals with what happens when Man tries to use science to become God. Why did you find this theme important to explore?

I’m a huge science nerd, and it is science that always points me back to God. Science in a lot of ways is magical: the way the human bodies works, the way science is like a life-machine with laws, the beauty and awe of the world around us. But when man tries to explore the world without the creator, it can end up in crossing lines that we should never cross, and we will never truly understand science without the creator of science.

Tainted is part of a series. How does it tie in with the other books in the series and can it be read as a standalone?

Tainted and Awakened are really one big book divided into two parts. If you want to know if Kat finds a cure and what happens to everyone, you have to read Awakened.

Your villains are evil, yet evoke sympathy from the audience. Was this your intention?

Yes. Every villain I create I want to have their “take over the world” goal, but then also a personal aspect, a reason that people would relate to, that they would say, “that could be me.”

An average day consists of writing 1,500 words, then some marketing. When I’m on an editing deadline, I’ll usually put in 6,8, even 10 hours a day. Of course, none of that can be done without large doses of coffee and tea!

Do you ever struggle to finish one story while the idea for the next is nagging at the back of your head? How do you deal with that?

I don’t struggle with that because when a new idea pops into my head, I start a file for it on my computer, then let my ideas simmer in that folder, sometimes for years as I add character ideas, scenes, and plot developments. Then when it’s time to write the story, I take a look over my folder and start to develop the story. For example, my first idea for Mark of the Raven (my newest novel coming out November 2018), I started the folder in August 2014!

I am finishing up the third book in my newest fantasy series The Ravenwood Saga coming out with Bethany House. It’s about a young woman who inherits her family’s gift of dreamwalking, but questions what they’re using their gift for and is there another purpose for it than manipulating people’s nightmares.

Here are the best places to find me online (and please feel free to say hi, I looooove talking to readers!):